Well, well, well. Consider me pleasantly surprised. I wasn’t really sure what to expect when the voters told me to kick off my Dungeons and Dragons Online adventure, but things have been far more enjoyable than I anticipated.

I suppose that’s a result of my own minor assumptions going in to this game. I always sort of pictured DDO as the sort of bastard child of Standing Stone Games while the studio continued to groom and prop up Lord of the Rings Online. Instead, I’ve found a pretty similar level of gameplay enjoyment that I recall having from LOTRO – which is to say, some of that aged old MMO funkiness.

There’s this sense that games from this studio have this kind of signature feel to them. A distinct look, a distinct form of combat, a distinguishing presentation that’s just… very SSG, for lack of a better word. DDO has this same sort of feeling to me, and it was a welcome change of pace for me. It was comfortable, bringing me back to when LOTRO first launched. 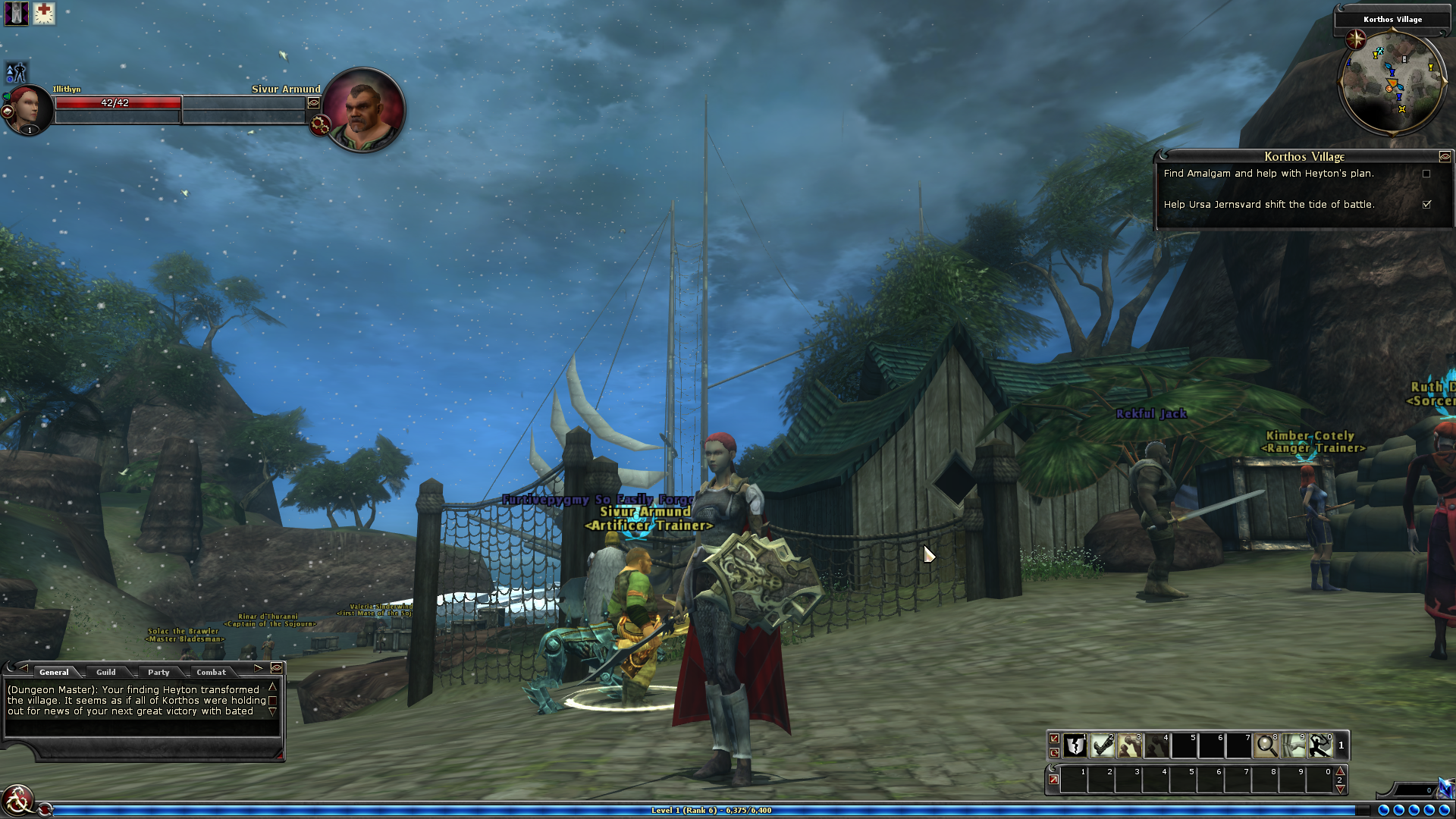 Of course, that’s that game and this is DDO, and while the bones of both games look and feel pretty similar, there are things that this game is doing that make it stand out. For one, the combat feels just a tiny bit more involved owing to the fact that I can enter mouselook mode, which makes swinging my weapon feel more like I’m swinging my weapon. Skills are basically little extra boons that enhance or supplement my holding down of the left mouse button, which is very nice. Also, the time-to-kill in this game feels like I’m actually using a sharp weapon against things – not too long, not too short.

In fact, about the only demerit I can fault for my chosen Paladin class is that the sound effects have another SSG signature – unimpressive, tinny, and underwhelming noises. Never has a sword fight sounded more boring. 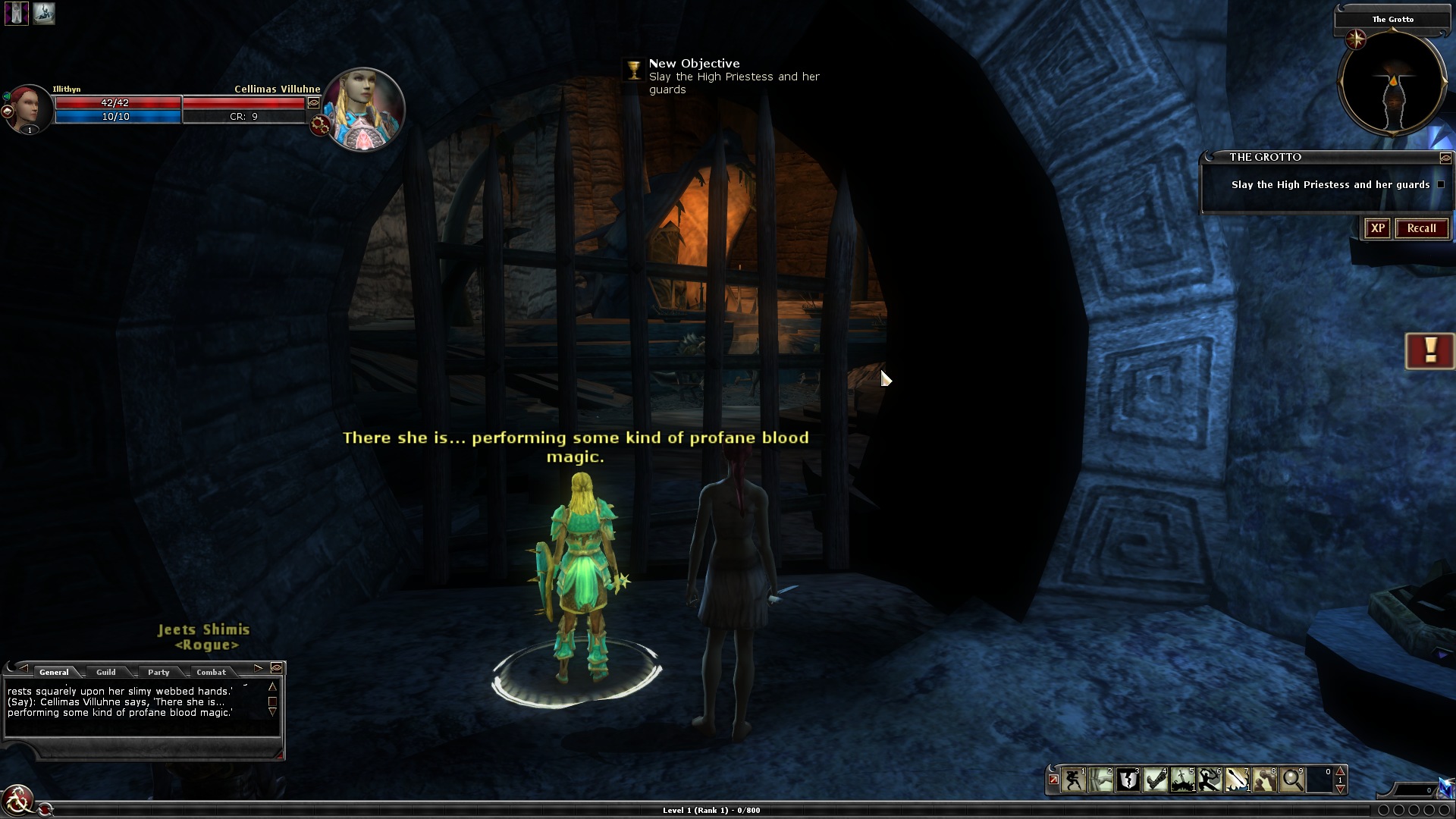 As for the game itself, most of my time was spent on the opening island, learning the ropes and going on a little guided adventure. The story was a nice little self-contained affair much like the sidequests of an Elder Scrolls Online instead of part of some grand overarching narrative, which I actually appreciate. I also liked that, at one point, I had to go into an open wilderness and find NPCs myself instead of blindly following a glowing minimap pip. Not to say that all quests in DDO are without that, but the break from the breadcrumb trail to find my own way was refreshing.

About the best thing about DDO for me so far, however, was how very much more like D&D it feels. There’s a dungeon master narrating things (though that voice changes a few times for some reason), which brought me into the fantasy of playing a game of D&D through the lens of an MMORPG. Much as LOTRO does set dressing right, DDO really feels like an experience that’s vastly closer to the source material than Neverwinter.

At least, that’s what it feels like for right now. Time will tell if these feelings persist. 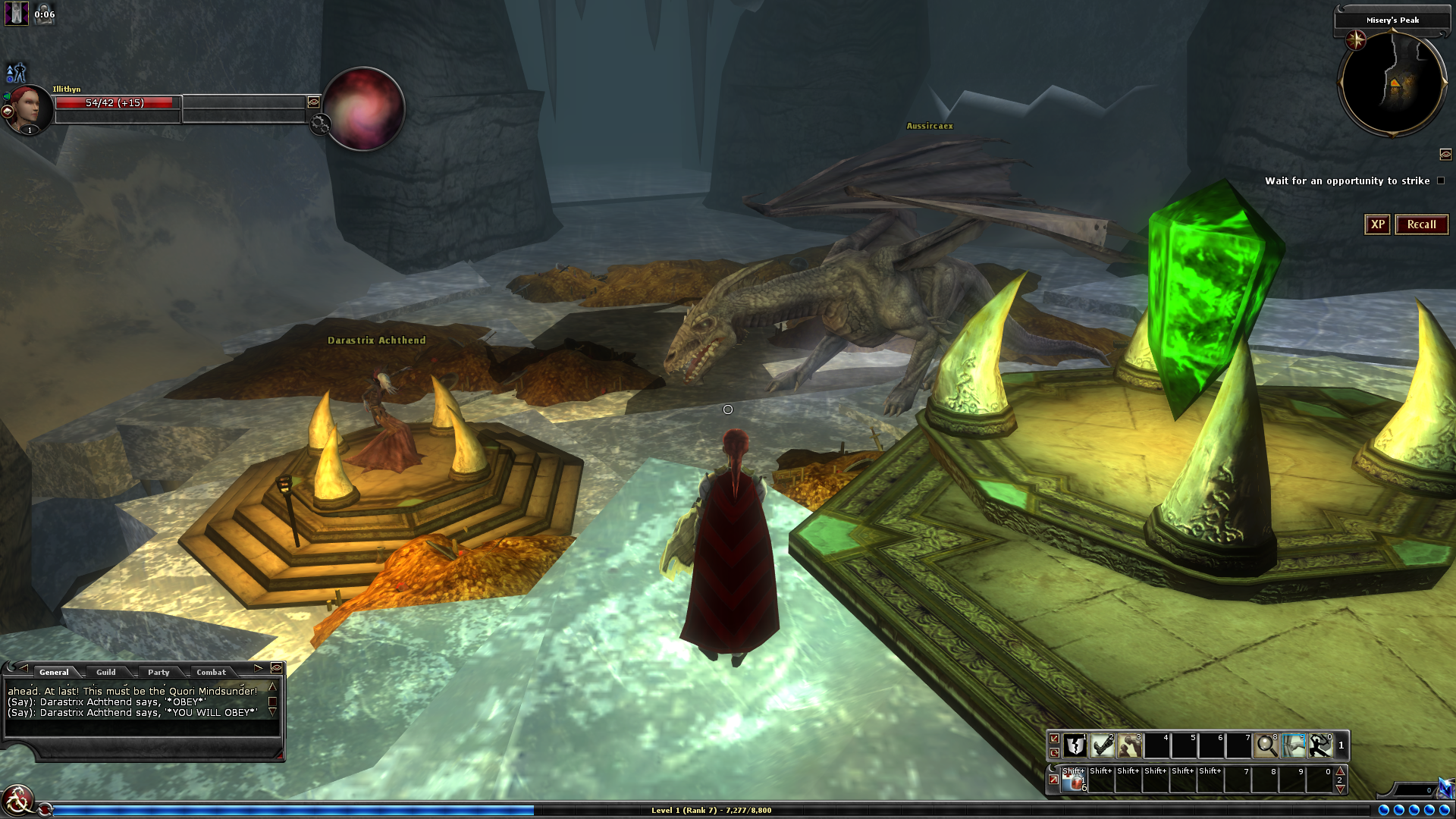 There are a couple of things that feel a little weird to me so far. Right now, I’m not really earning levels so much as points that I can use in an Enhancement Tree. I’m apparently seven ranks in to level 1, which is kind of weird. It might have been explained to me in a tutorial that I blipped through, but it’s a weird choice. It hasn’t stalled my progress yet, but I can’t help but worry that axe might fall on me.

Regardless, I’ve had a grand ol’ time playing this one, enjoying being a paladin and slicing up sahuagin and cultists. It’s not been the most original of adventures, but it’s been a fun one.

As of right now, I’ve got off of Noob Island and arrived to the location of Stormreach, which presented me yet another pleasant surprise in the form of a wealth of things to do next. This leads us rather conveniently into our next set of polls! 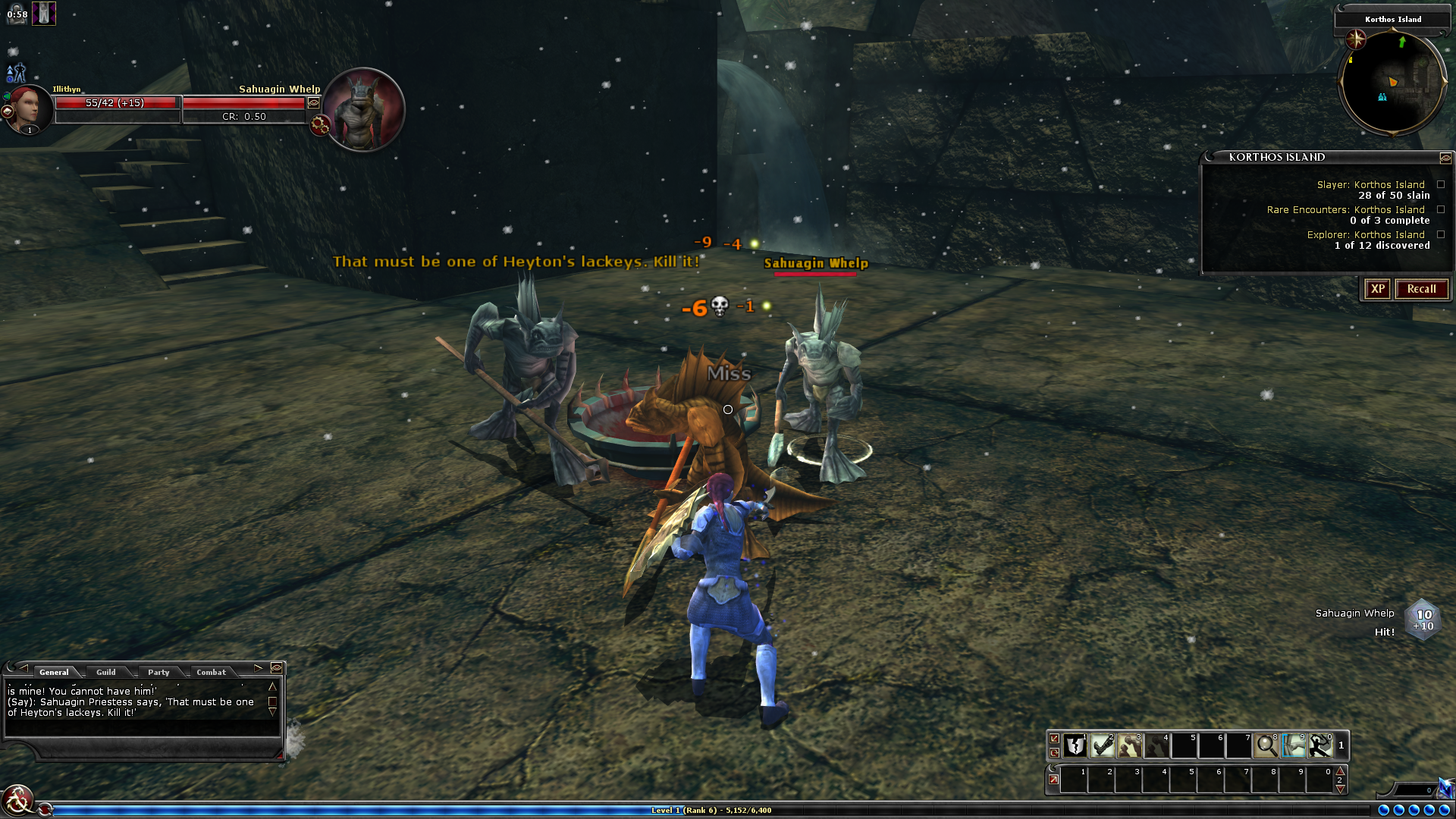 As suggested by you fine folk, I made sure to collect my free bundle of quests that’s being offered, which probably accounts for the number of things that are available for me to try out from Stormreach. That said, I wouldn’t be against perhaps seeing if there are things on Stormreach itself to do, so that’s poll question number one:

What quests should I take on next?

The second poll is probably more for the regular players, but I wanted to ask it anyway. One of the commenters from last week suggested to put all of my points in the Knight of the Chalice tree, but I would be remiss if I didn’t perhaps pick the brains of any regular DDO players. Thus, poll question two: 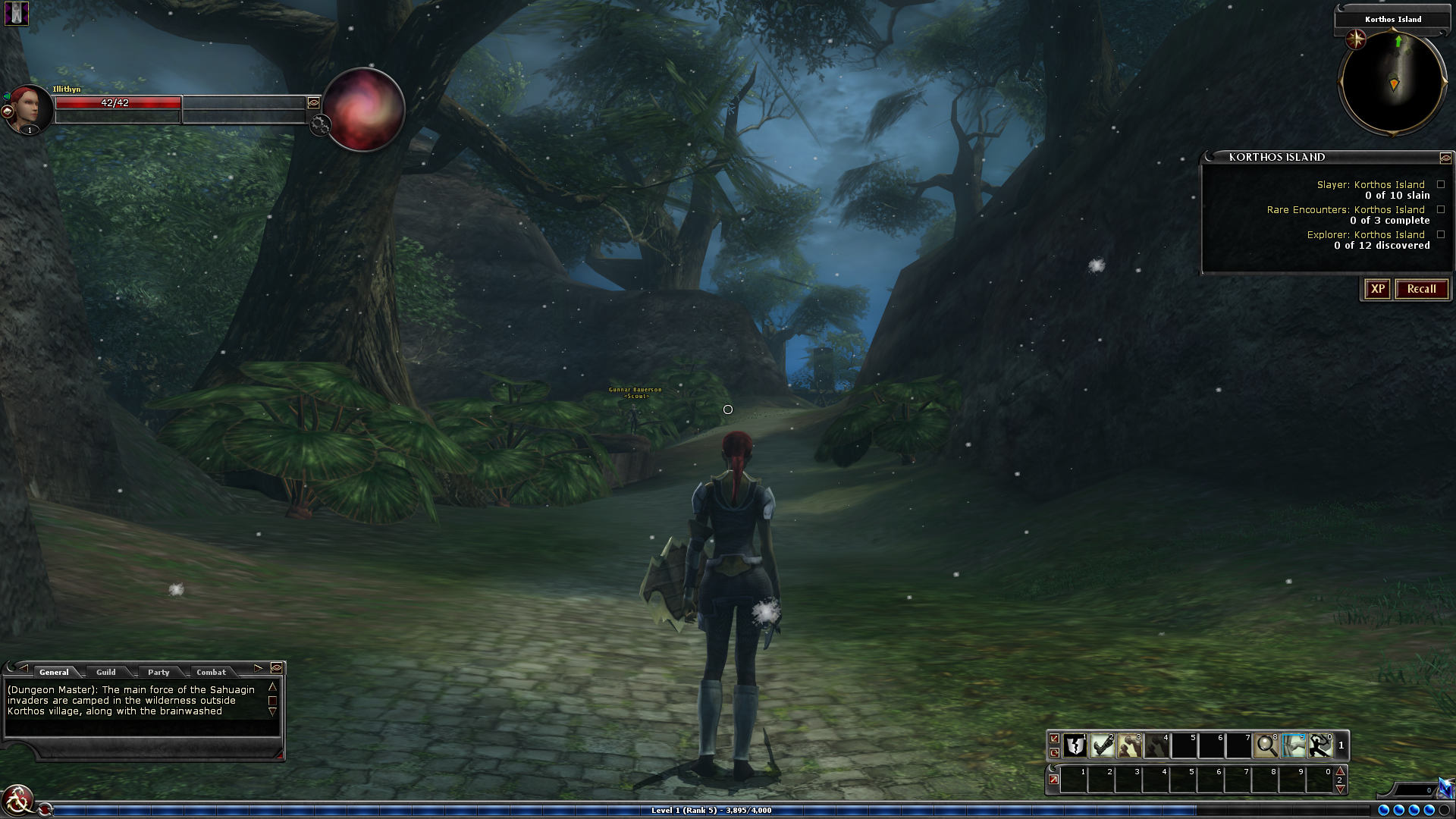 As usual, polling will wrap up at 1:00 p.m. EDT this coming Friday, July 10th. I find myself having the comfortable problem of looking forward to playing more yet needing to wait to see how the polls shake down, so here’s to some more enjoyable adventures in the very near future!

The Stream Team: Undercover as a Waking Flame Cultist in Elder...