I’ve heard you loud and clear, Dungeons and Dragons Online friends. There were a number of comments on last week’s column espousing the virtues of the Keep on the Borderlands adventure to the point that it was impossible to ignore. And you know something? Every one of you was right.

END_OF_DOCUMENT_TOKEN_TO_BE_REPLACED
My adventure started with following even more playerbase advice in regards to leveling up (“Oh, so THAT’S what those little pips at the end of the XP bar are for!”) and using a two-handed weapon. I think I’ve been making some generally smart decisions with regards to unlocking Knight of the Chalice Enhancements because my paladin is absolutely hitting like a truck, likely thanks to the broadsword I purchased, so thanks for the guiding hand.

With points spent and equipment swapped, it was time to head to the Keep. While Korthos Island was a fine enough introduction to the way Dungeons and Dragons Online plays, the difference between the quests in that starter area and the quests in the Borderlands were pretty much night and day. 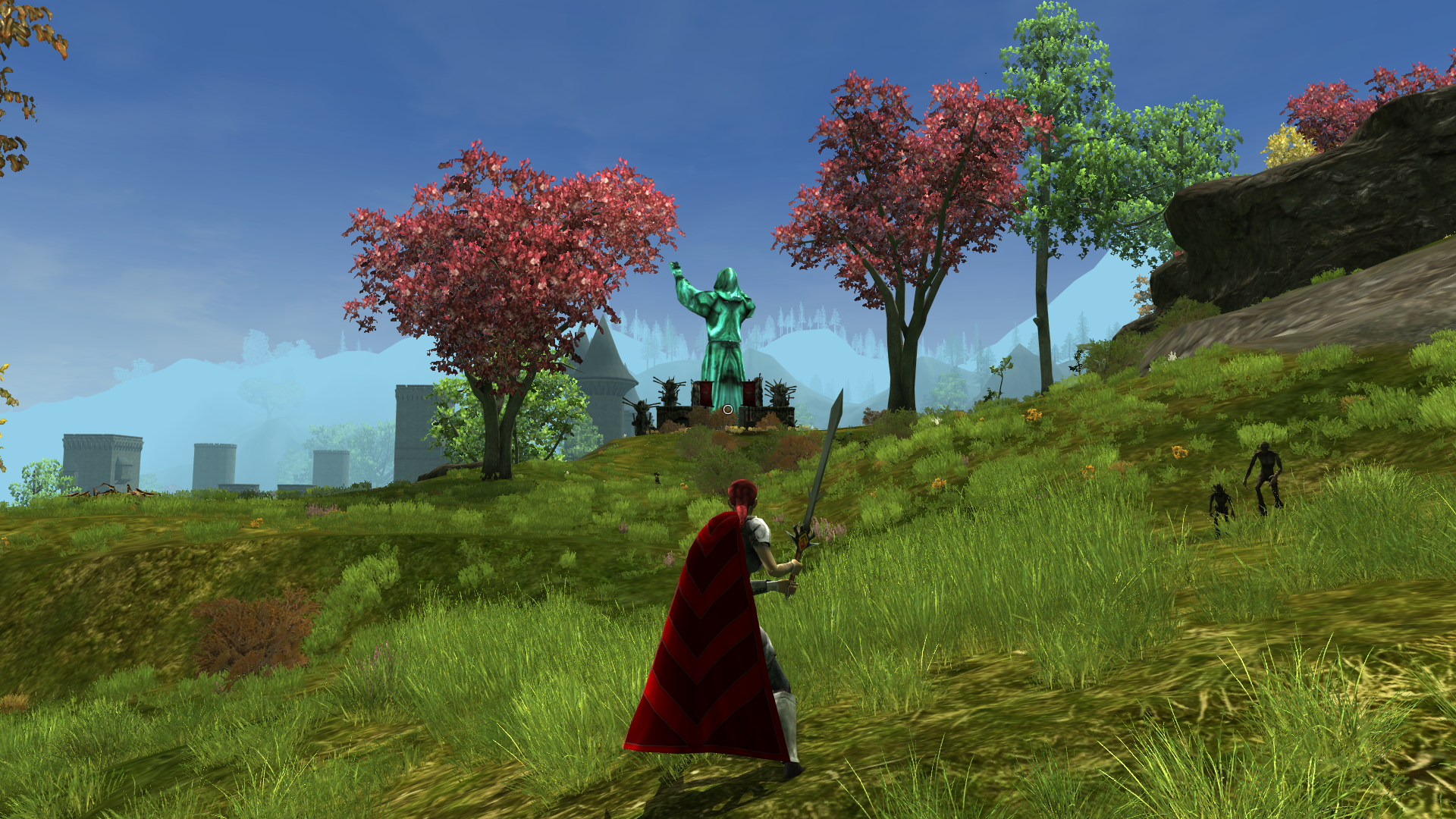 For one thing, it was effectively a series of quests that I picked up from a bunch of NPCs at the Keep that all told me to find the Caves of Chaos to complete. Those were, really, the only instructions; no pathing, no breadcrumbs. And since there was only one other logical place to go – the Borderlands themselves – the onus was on me to find these locations and complete my objectives.

While a general cardinal direction of where these Caves were hiding would have been nice initially, I also really appreciated how the quests all encouraged me to explore the Borderlands wilderness area. It also ended up being a double-edged sword as I would ramble about in random (and often circular) directions towards various points of interest that I saw on the horizon. I also started to fall deeply into the trap of trying to chase the wilderness objectives that involved finding locations, encountering rare fights, and slaying a growing number of foes. The fact that doing this apparently nets you a mount sure didn’t help, but it was nice to be rewarded for my wanderlust. I was hooked so effectively that I spent an entire day just trying to find the Caves and walking the wilds.

Eventually, though, I knew I had to focus down and get these eight different quests completed, so I focused on a direction and went, doing my best to reign in my fervent desire to explore interesting-looking locations on the horizon. I finally stumbled on a point of interest that said the Caves of Chaos were “just over the hill,” and sure enough I found where I needed to be. 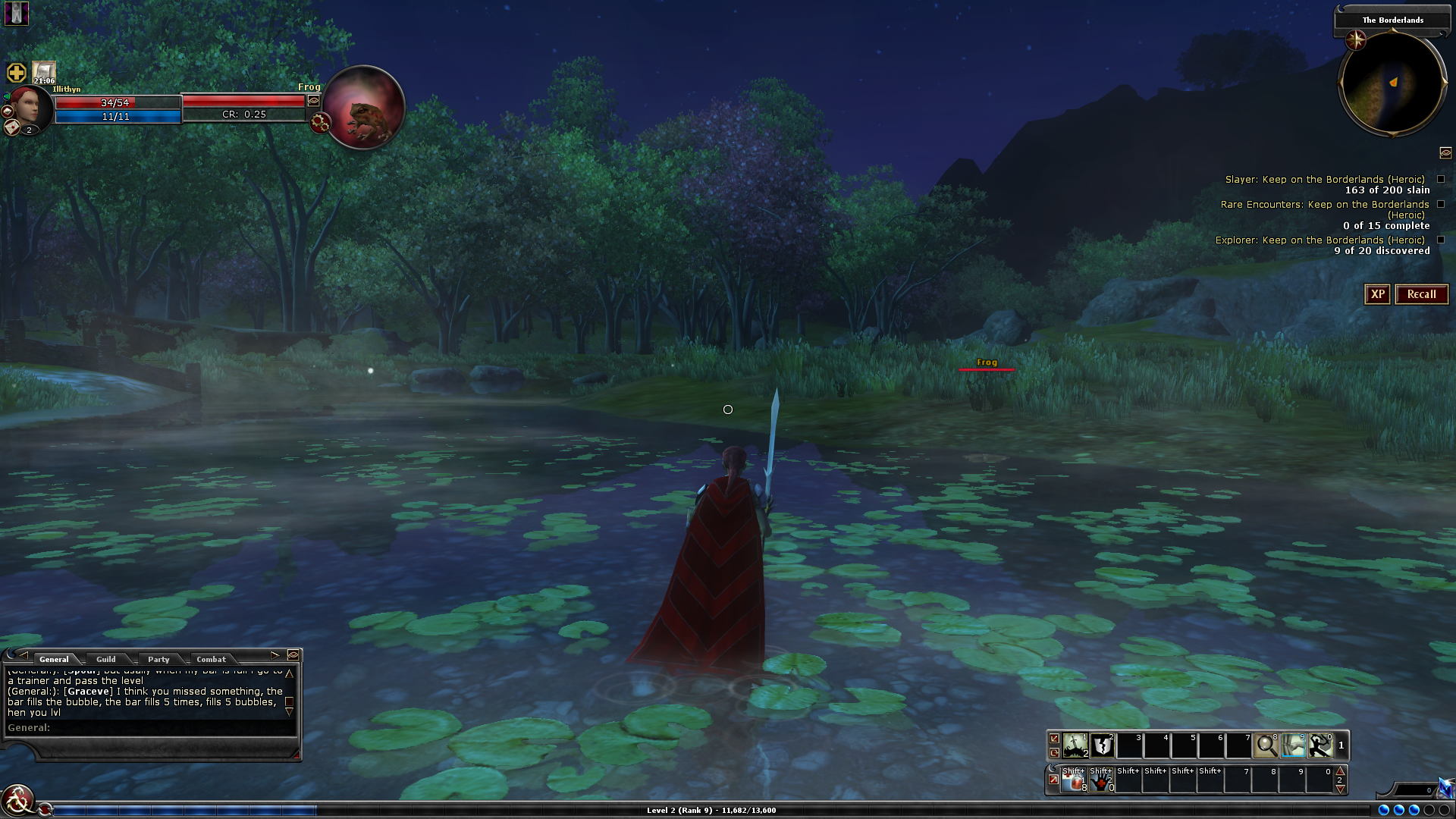 It was also at this point that I realized that the map had a whole bunch of green flags outlining where each dungeon entrance was located. Oh well, better late than never. And I have to be honest, I felt pretty good about finding the caves myself without needing to follow a compass arrow.

The other part of this adventure pack that I liked quite a bit was the dungeons. Someone remarked last week that DDO really knows how to make dungeons, and these little quests absolutely affirmed that for me. These were fun, self-contained, little labyrinthine delves that felt like classic D&D combat maps, interspersed with plenty of combat, a couple of fun (if not too taxing) puzzles, and more fantastic DM voiceover work.

While all of these dungeons had a connecting theme – help the people of the Keep – they all told their own little stories that were entertaining even if they weren’t exactly blockbuster stories. There was even one quest that was combat light, which was a nice change of pace.

In any other game, I would probably shrug dismissively or roll my eyes at such middling stories, but something about DDO’s quests hit differently. Probably because of the overall D&D tabletop feeling of it all; I’m mentally giving such simple stories a pass because they encapsulate the idea of simple and fun adventure that the source material grants, and DDO really does encapsulate that the best. 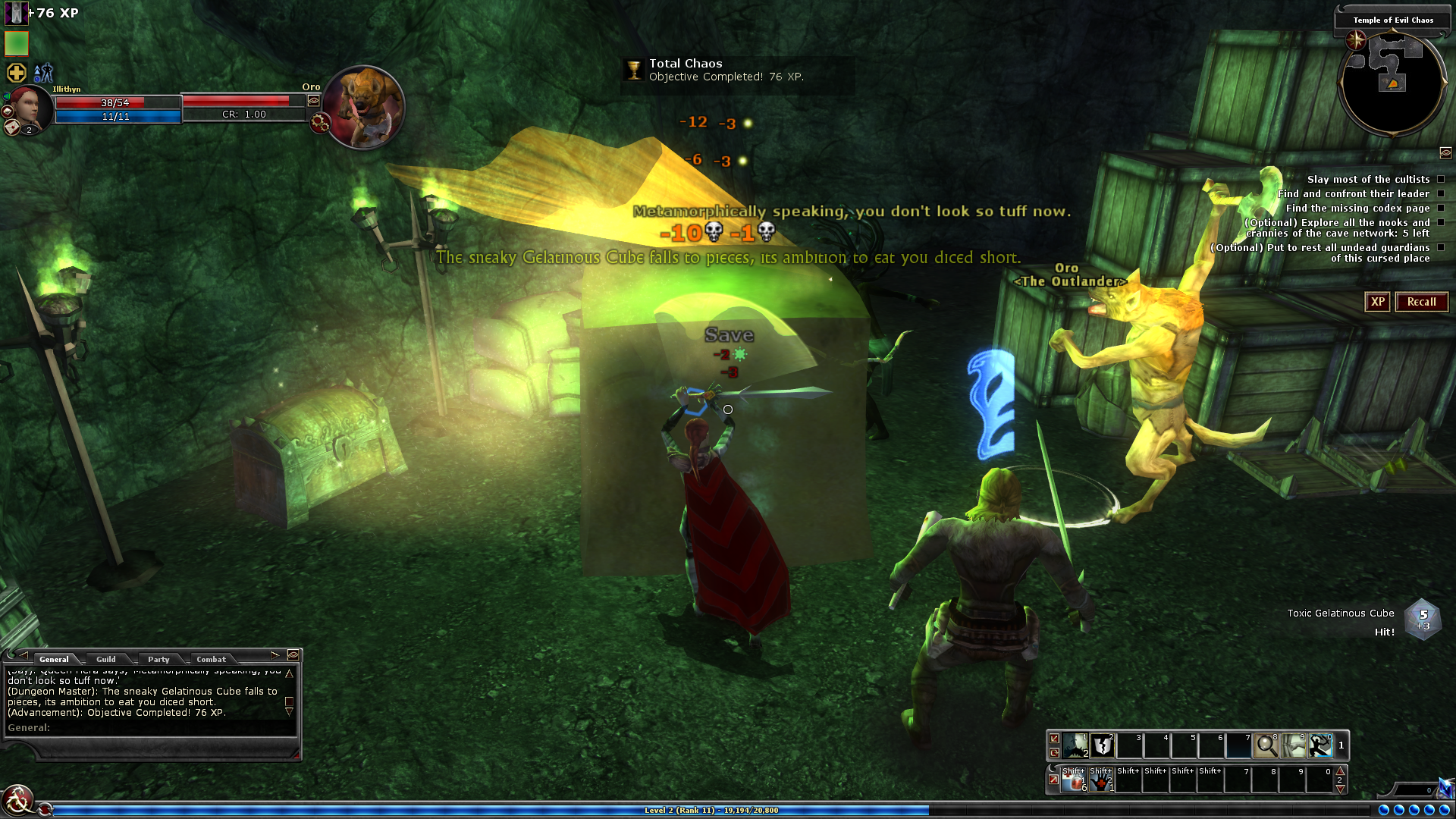 By the end of it all I got myself another level, a whole bunch of armor and rewards, a stupid amount of gold, and a two-handed weapon that actually worked against me because of my alignment apparently. It was at this point that I have to admit the tooltips for equipment are a bit confusing. Items can often be loaded with a bunch of extra affixes that read like the instructions of a card in Magic: The Gathering. I think I’ve got the right rewards equipped, though. When all else fails, go for the things that give you bigger numbers, right?

Now that the Keep at the Borderlands Is safe, it’s time to choose our next destination! With the help of a UI element that another commenter pointed out (seriously, the DDO playerbase is super helpful), I’d like to narrow down our next little adventure area to head to.

What area should I find my next quests from?

Poll two is, once again, all about character progression, but it’s not about where to plonk my Enhancement Points so much as leveling focus. Up to this point, it’s been all paladin, all the time, but I’m also curious if going multi-class would be a good thing to try at this stage. Thus, our second poll.

Should I level paladin only or multi-class? 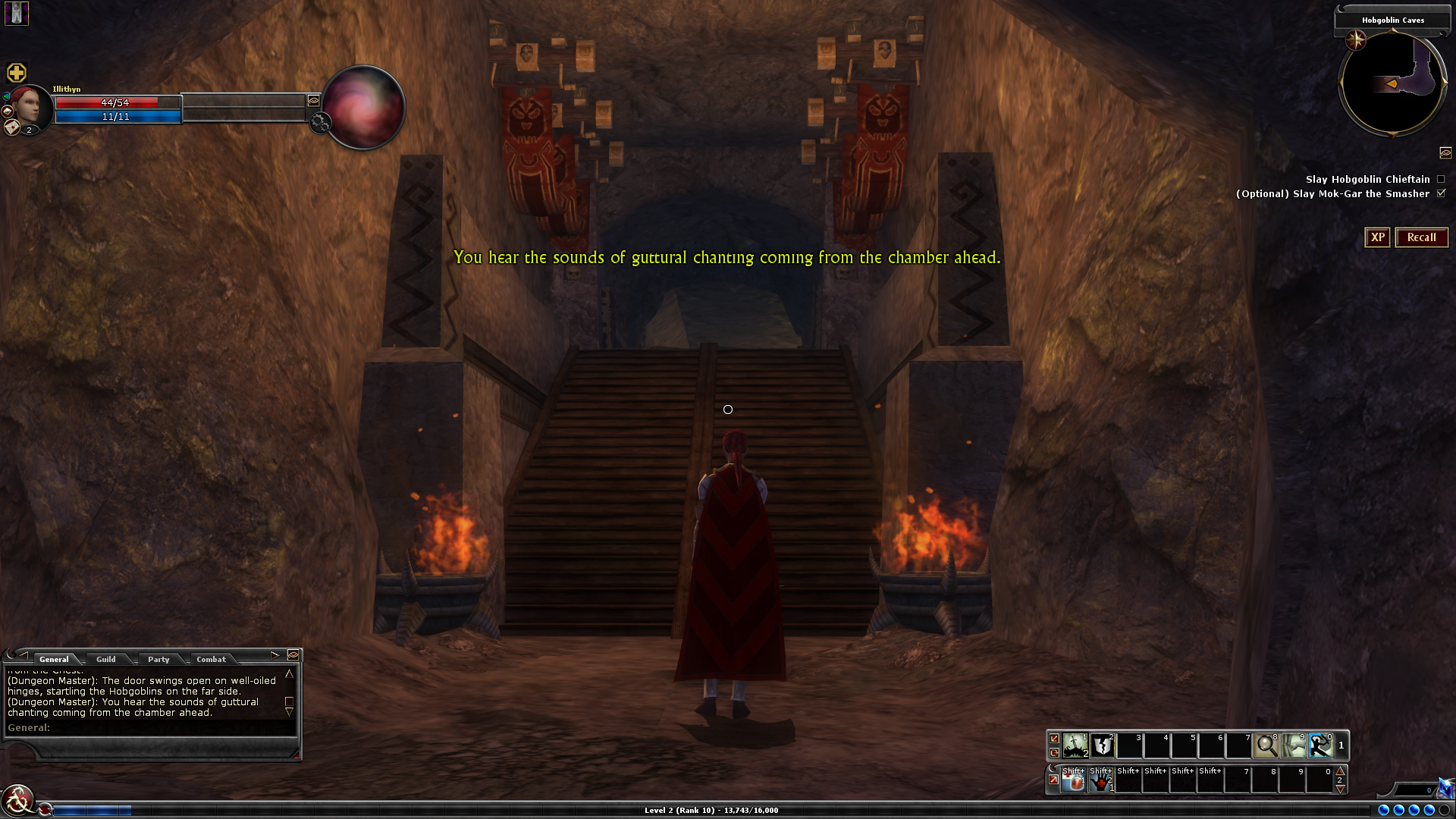 As always, polling will wrap up at 1:00 p.m. EDT this coming Friday, July 17th. In the meantime, I am seriously addicted so I think I’ll spend some time bumbling around the Borderlands in the chase for those area objectives and that mount.

I recommend you farm the mount. It takes mostly 2/3h solo.

Also, go Paladin only. Don’t multiclass unless you’re following a specific build. It’s really easy to screw up on this game. My build is a 18/2 Paladin/Rogue for evasion and trapping.

One note on the KotB map: Get people who care to help if you want a mount. Especially if they have already done it, but it won’t hurt you in any case.

DDO has a loot system that assigns each player involved loot from the chests. There’s a down arrow next to the loot, so you can pass it to somebody else. So, for example, if somebody with a mount was with you they could pass you the Quall feathers they get to help you on your project of getting a mount.

Additionally, there’s some interesting options with loot. A lot of it has skill boosters affixed. If you got any ingots while running KotB you may want to return long enough to talk to the smith there. They trade those for good weapons (likely to last you for 4-5 levels at least). Outside higher damage numbers, you will likely want to keep an eye out for skill enhancements on gear that suit you. For example, you might get an item that offers a boost to intimidate, which can work both in conversations with NPCs, and in that you can use intimidate as a taunt. (Intimidate acts as a taunt with increased threat generation so your hireling will be just dandy even if they do a bunch of damage output, and bluff can draw foes without pulling an entire group if I remember correctly, so having them on bar is a good idea. Diplomacy works similarly to bluff in that it reduces your threat, which is good to know if you have an actual tank around and diplomacy is higher than bluff.)

P.S. Multiclass requires a really solid plan from the get go, and is mostly used in solo play for 1 level in rogue or artificer to disarm traps and such… which can be very beneficial, but also means you need to keep extra gear with open locks and disarm device on it, and tools to do so with which are a consumable and need constant replacement.

Harbour quests: you haven’t experienced DDO unless you never want to see another kobold by the time you hit level 4.

Gatekeepers grove quests are new and very cool and fun, however they are more difficult than their level 3 designation would indicate. They feel like level 4-5 quests IMO.
So, I voted to work on the other harbor quests which are older adventures that have seen a little polishing over the years, but are still quite fun and safer for a new player.
On a similar vein I recommend remaining Paladin as multi-classing requires advanced theory crafting and a plan that starts at the create character screen.

You should also be gaining a few DDO store points as rewards for gaining favor, which can be used to hire gold seal hirelings that can play with you in addition to your vendor bought hirelings. So you could potentially fill a group of six with hirelings. Yourself, vendor hireling and four gold seal hirelings. (Not that I recommend doing that, just pointing out how it works.) You can also get a gold seal Rogue to pick locks and disable traps, the only way to get a Rogue hireling.

DDO points can also be used on a wide variety of buffs, cosmetic items and game enhancements like more character slots.

Have fun and beware, the deeper into the city you go, the more deadly the traps and denizens become.

The company that owns Gamigo bought out Wizard101 studio Kingsisle too

Cyberpunk 2077 developers share insight into issues that led to the...

The Daily Grind: Has anyone ever accidentally ruined an MMO for...