Week after week in this round of Choose My Adventure, I’ve been finding little things to love about Dungeons and Dragons Online and this final week put a capstone on my enjoyment. A cherry on my sundae. A flambe flourish on my Baked Alaska.

END_OF_DOCUMENT_TOKEN_TO_BE_REPLACED
And while I will admit that ongoing technical issues did create some potholes along my path to enjoyment recently, I still really had a great time. So much so that I want to make this a regular fixture in my gaming diet. 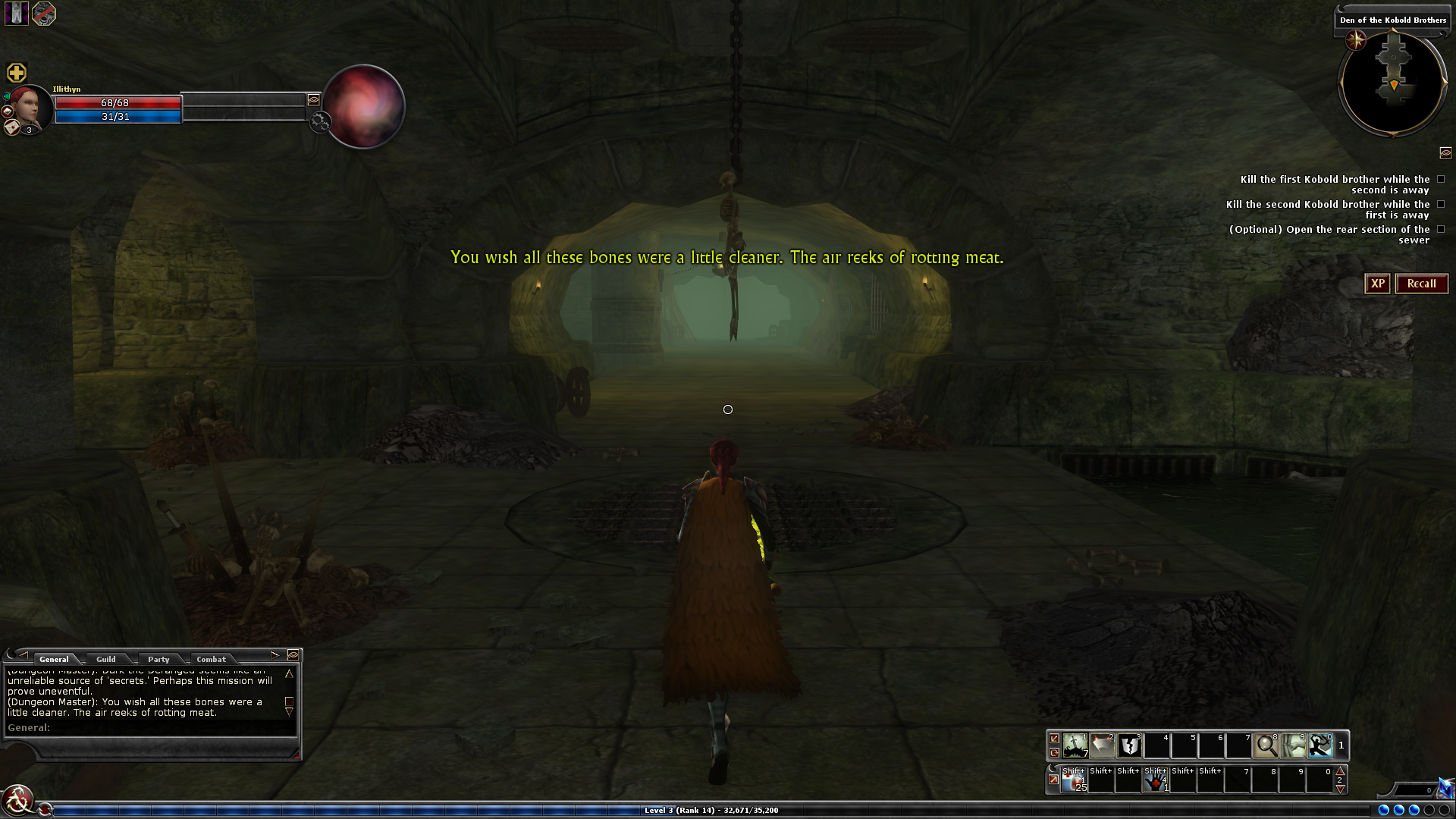 The formula for DDO’s enjoyment is so painfully simple — it just lets you go out and enjoy adventures. I don’t really need some sort of meta-narrative to take up digital sword and shield against things, I just simply want to be an adventurer. Lots of MMOs call player characters “adventurers” but also try to make them feel important, hoisting them to saviors as they move from facing highwaymen to outright gods. I don’t necessarily want to be a slayer of gods, I just want to go out and clear some baddies, and that’s pretty much what this game lets me do.

A lot of this, as I’d been saying over the course of this month, is enhanced by how DDO absolutely nails the feeling of playing a game of Dungeons and Dragonsat a tabletop, at least at a conceptual level. It tries to have a level of drama to the things my character was doing, but it all felt like it was that fun, winking sort of drama that doesn’t want you to get too emotionally invested in it. It’s all just fun theatre and playful melodrama. 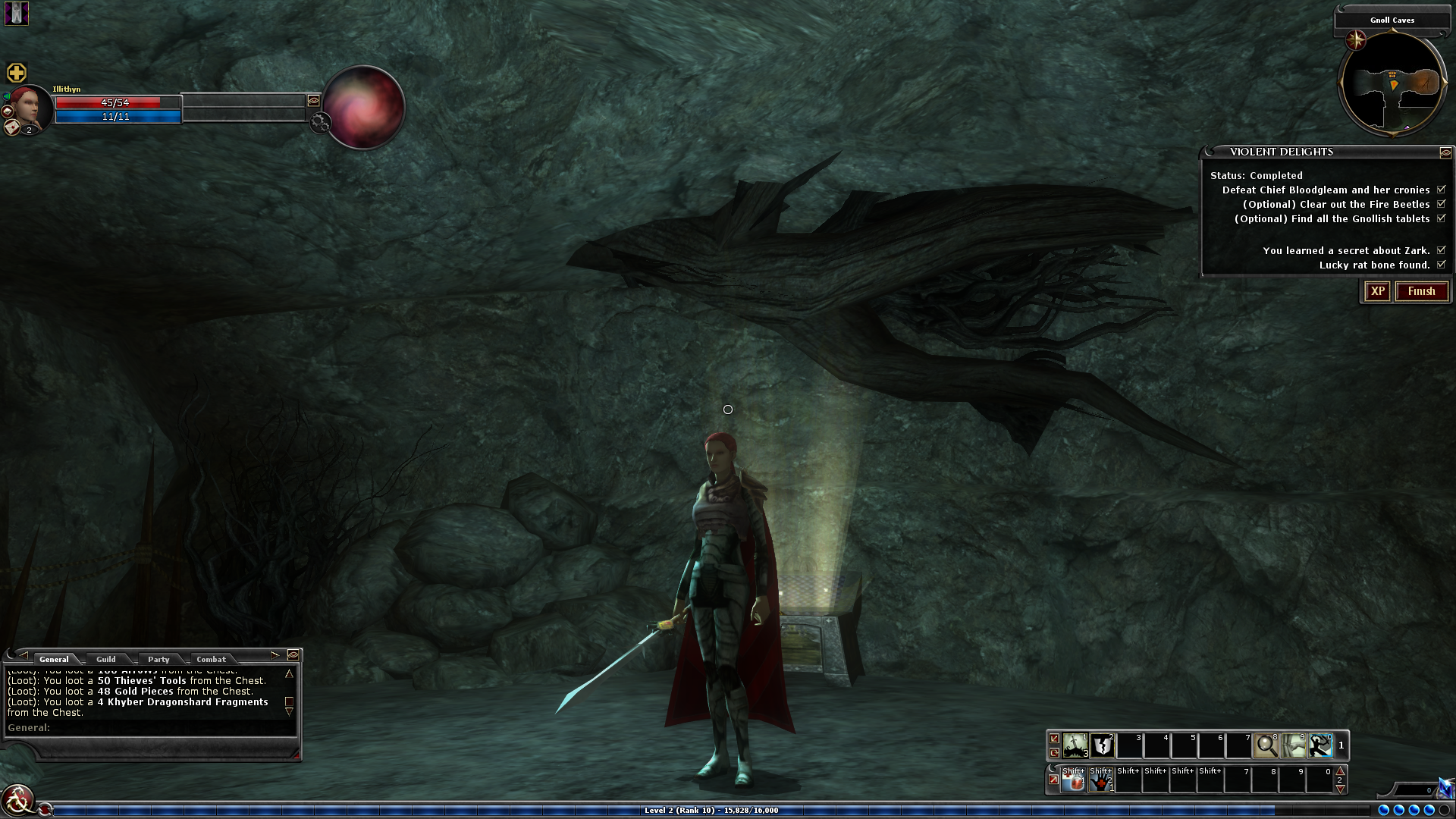 This sense of gleeful adventure is so enrapturing that I could pretty much ignore some of DDO’s greater faults. With a bit of introspection, I can freely admit that combat is not exactly compelling. My character skills and animations were pretty routine and boring, lacking any sort of panache. The sound effects and impacts of weapons feel spectacularly underwhelming in that Standing Stone Games way as I said before, and the game isn’t exactly a stunner to look at in terms of graphical fidelity.

None of that derailed me, though. I was a paladin cleaving through foes and righting wrongs to help some folks out. That’s all I wanted, and this game delivered. Dungeons and Dragons Online just arrived to me at a perfect point where I was hoping to find an MMORPG that would let me enjoy a few adventures. It’s basically like the excellent sidequests in Elder Scrolls Online, except the entire game is like that. 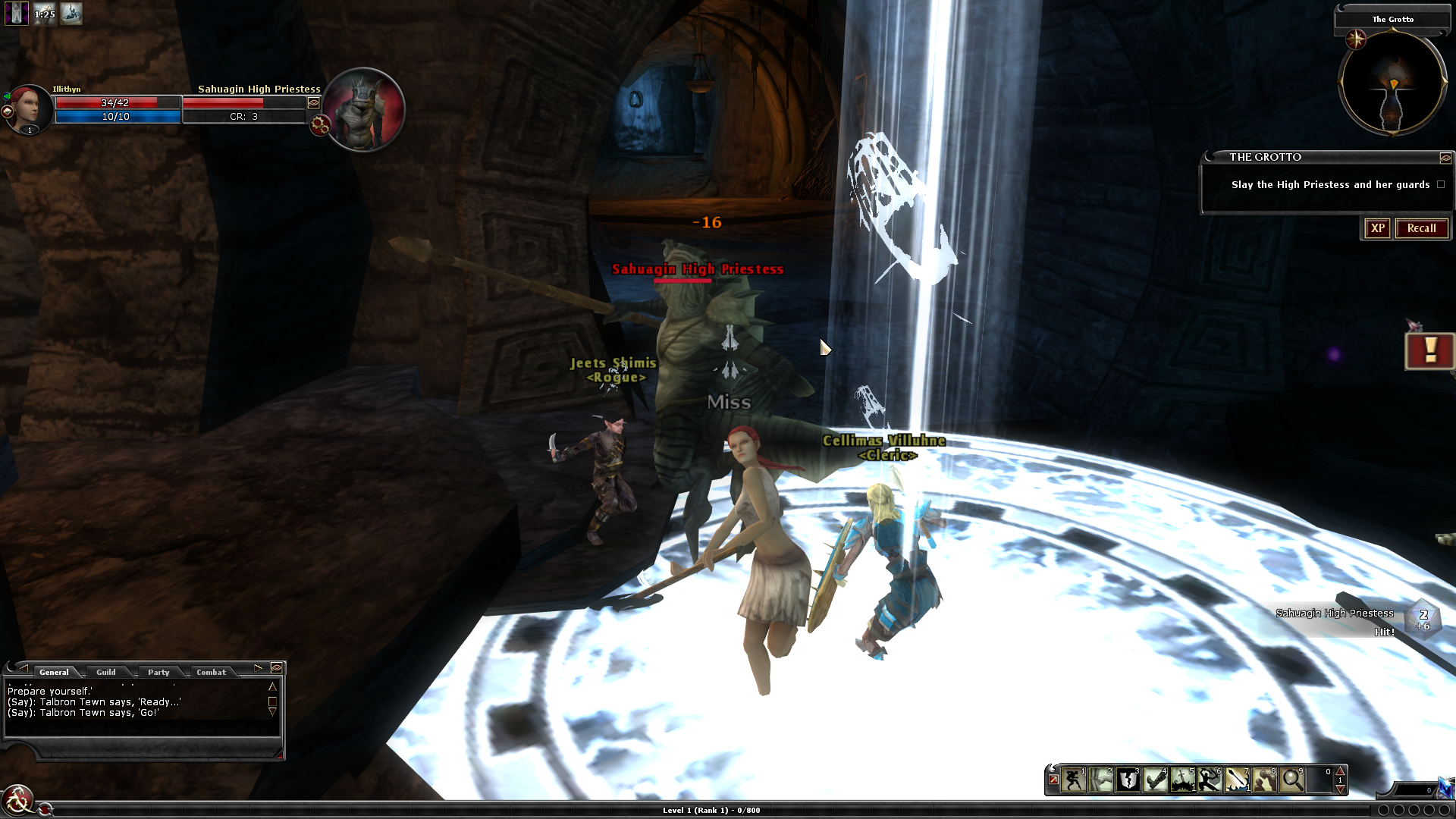 That is, of course, not to say that this game is flawless. One of the bigger issues I still am struggling with is how to know if I’m wearing the best gear possible. There are some obvious metrics for me to follow in terms of raw numbers increasing, but several of the affixed boons to weapons and armor often feel over-explained and don’t really give me a sense of what items lock into place with one another.

I also admit that I’ve only touched the tip of this game’s iceberg. I haven’t really gotten a look at what awaits at the top end of content except for that accidental sojourn into Hell, and I never really got any opportunities to see what group content is like, with only the occasional meeting of other players in Stormreach. The fact of the matter is that I’ve liked enough of what I’ve seen that I actively want to reach for those goals instead of remove a CMA title from my hard drive and move on with my life. The number of responses from players of this game also endears me to keep playing; folks have been so helpful and seemingly eager to enfold me as a new player.

I feel so strongly about Dungeons and Dragons Online, in fact, that I’d like to subscribe to it. The only thing staying my hand is SSG’s handling of its current issues; I can’t in good conscious reward a company that is actively withholding information with money. 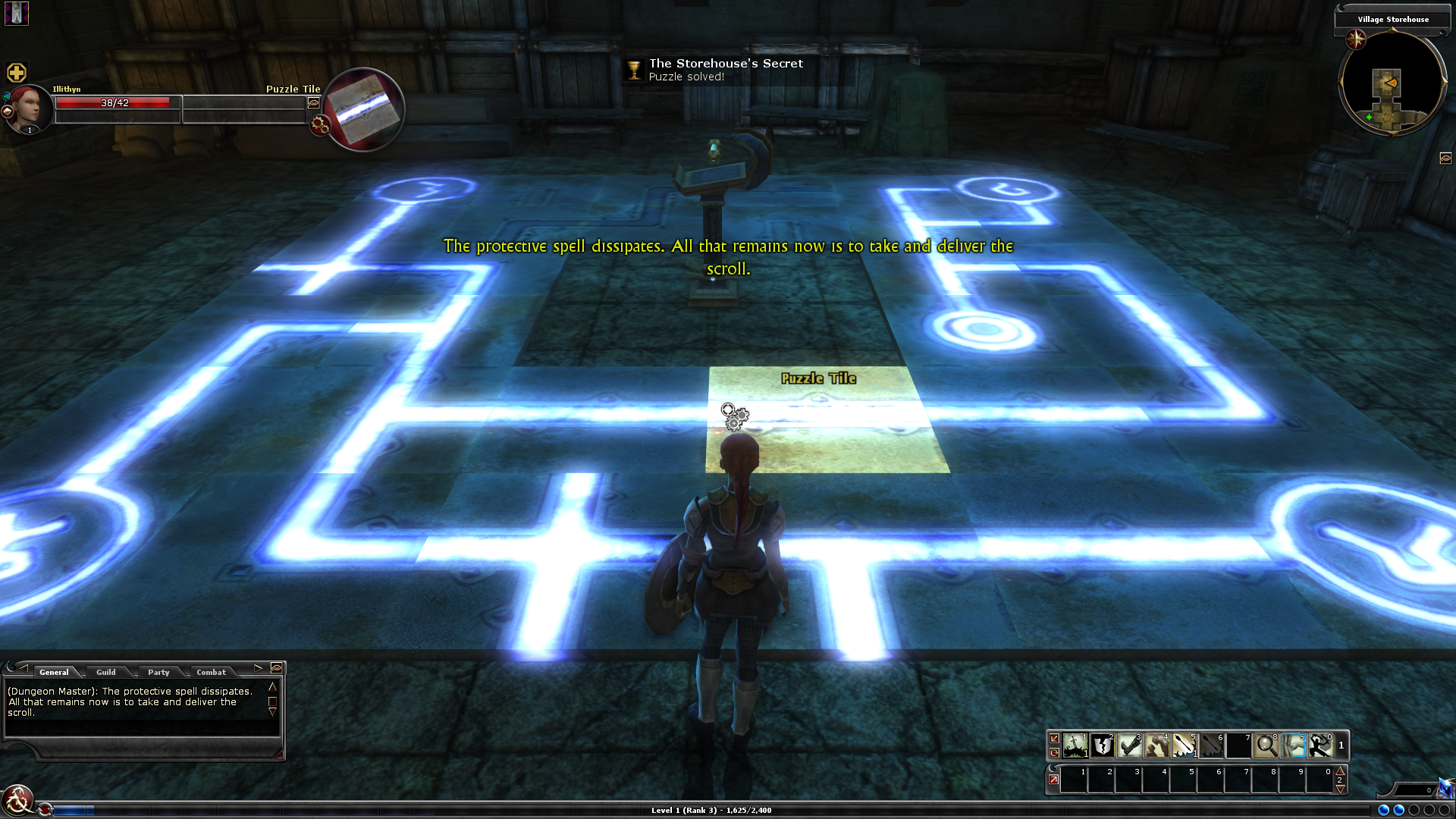 All in all, I’ve had a good time with this one. It’s structured in such a way that smaller play sessions still bring a sense of fun and a little bit of progress, the overall D&D vibe is enthralling, and the whole title has a comfortable, aged funk to it that I can get in to.

But that’s it for this one, ultimately, so now it’s time to get in to AdventureQuest 3D. I’ve dabbled in this one briefly but never bothered to circle back around to it, so I’m interested in seeing how this one fares. Before we press forward, however, there is one poll question that I need answered — a tried and true one: the starting class.

As it turns out, I’ve got a pretty chunky number of Dragon Crystals available to me, so our options are a bit more open here than they would be otherwise. So, yes, it’s one poll, but there are a lot of options open to me here. Which means I need your help to decide

What class should I start with in AQ3D? 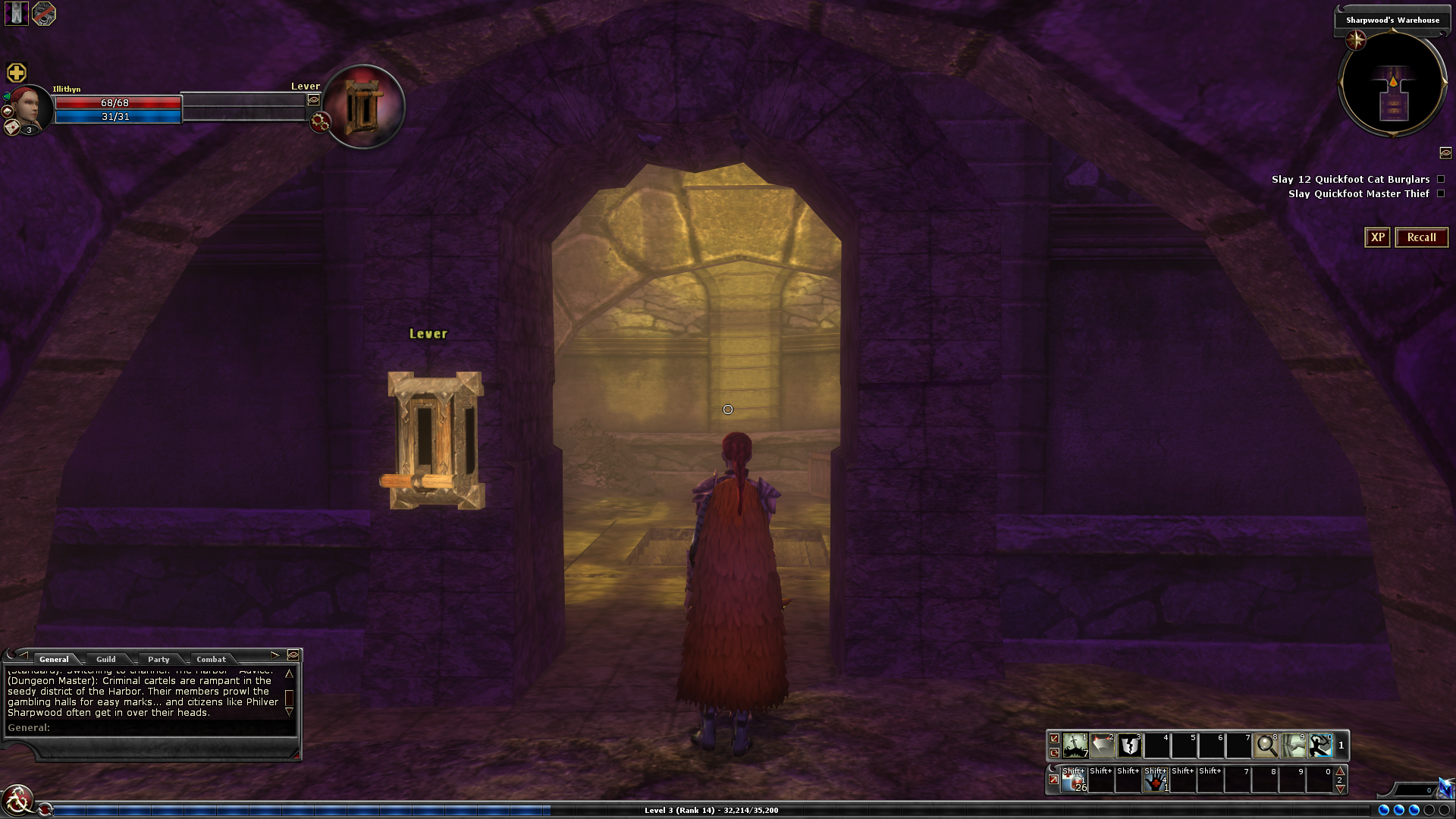 As ever, polling will wrap up at 1:00 p.m. EDT on Friday, July 31st. For the time being, I hope my fellow DDO (and especially LOTRO fans) can see some progress on connection matters soon. Especially since I want to see where this game goes from here.