Roblox VP of Product Deepak Chandrasekaran held a skill-building talk at GDC Summer 2020 this week titled Building the Metaverse through User Generated Content and the Cloud, but in true, the panel primarily was about Roblox. However, Chandrasekaran did bring up some good points that we can discuss in the context of the Billion Person Gaming panel. In keeping with the references to Ready Player One that year, Chandrasekaran does talk about multiple worlds and navigating them in a singular space, but we don’t have to limit that host space to Roblox for our discussion.

Chandrasekaran originally defined the metaverse as an online, shared space where players have a singular identity in a single persistent world. While he then changes his definition to worlds in order to discuss different themed and rule-governed virtual spaces, I would argue that it would defeat the purpose of having a metaverse if you really are going with multiple persistent worlds. Otherwise, what would be the difference between the metaverse and Steam, Playstation Accounts, your Blizz ID, and other accounts that often tie unrelated virtual worlds under the same user name for billing purposes?

In fact, I suspect using that definition would defeat what makes Roblox interesting: that the base game is a three-dimensional shared space where players can then elect to travel to other three-dimensional shared spaces with different themes and rule sets, all of which are contained in the overall Roblox universe. While MMO designer Raph Koster has discussed how social media like LinkedIn are almost like character sheets, most of us wouldn’t call social media a virtual world because we think in terms of avatars we can move in an environment.

One of the usual talking points for judging an MMO revolves around whether its environment is persistent and interactive. It’s hard to really call a character sheet an environment. But if your Steam account has a list of destinations (games), does that make it a virtual world or even a metaverse? That could probably be debated, but for the sake of conversation, we’re going to say, “No,” simply because Chandrasekaran argues that having a 3-D avatar is what should make the metaverse feel different when compared to just being on the regular ol’ web.

Life in the metaverse

Now this is all well and good, and we’ve seen this before from games like Warframe and Daybreak’s stable, not to mention Second Life, but as Chandrasekaran grew up in India, he knows intimately that different cultures have different relationships with money. Credit cards may not be the societal norm; certain payment systems popular in the west may not be so hot in other parts of the world. Whole payment systems are subject to the whims of the local government. Having alternative ways to pay players or receive payment is important too.

Chandrasekaran puts forth the idea of relying on user-generated content in order to make the multiverse grow with minimal capital. I’ll dig into this a bit later, but it’s certainly a way to generate more, low-cost content, especially if those creating for their metaverse mates also find their own ways to monetize their content, which the metaverse owners would get a cut of.

Then there’s the creation process to consider. While it might be tempting to charge players for the creation tools (which should be easy enough for an amateur to start making content with immediately), Chandrasekaran suggests to wait until players are receiving payment for their work. It helps motivate them to finish content creation, which is what the metaverse owner is after.

This isn’t all work, though. Remember, the players can create but also consume. If players want something like WoW, they can make it. If they want something like Goat Simulator, they can make that. But we’re talking about a single, persistent world where players have a single, persistent identity. Chandrasekaran suggests that under the hood, there should be a way for avatars to retain some features so they always feel like themselves while traveling throughout the metaverse, beyond maintaining their friend list and name. 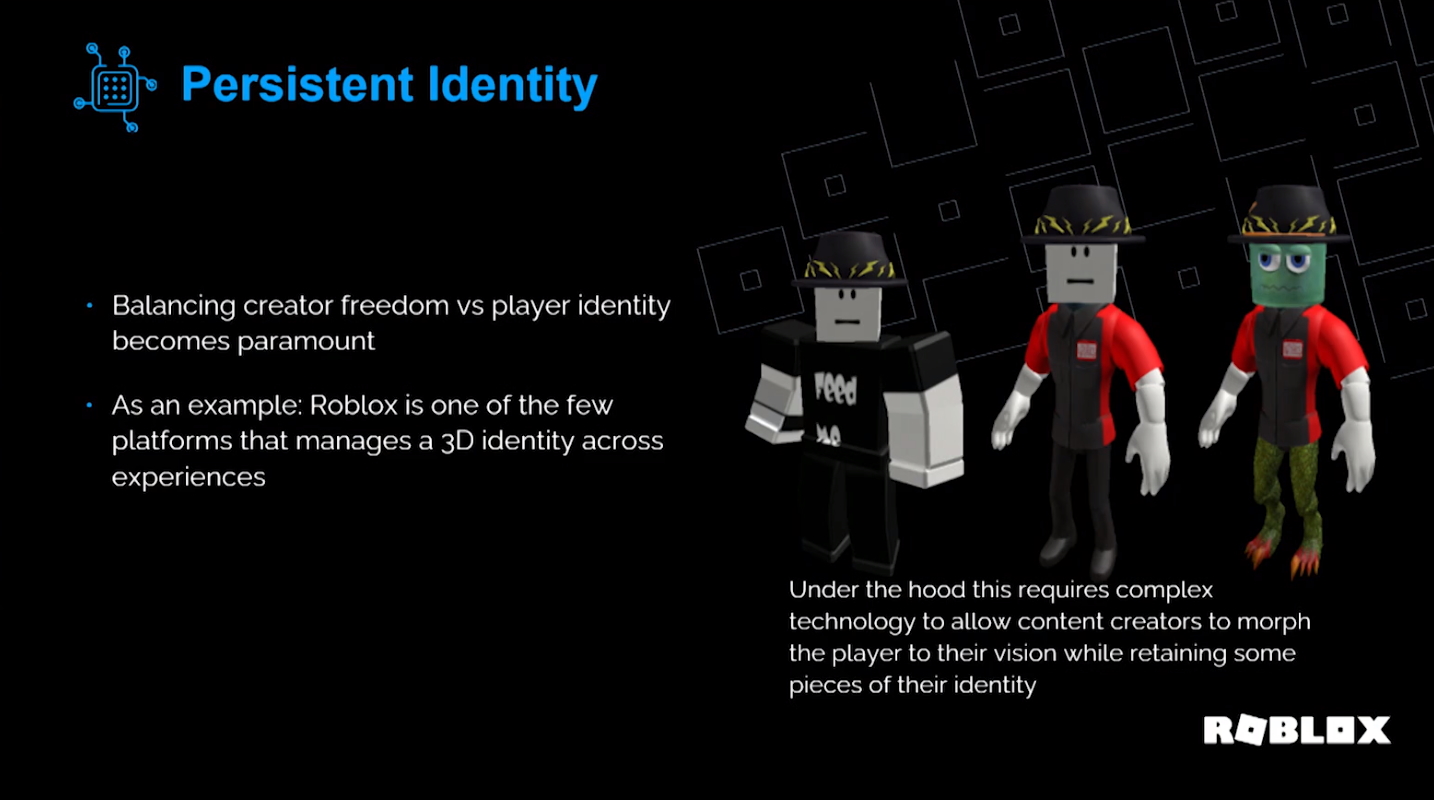 Content creators also need to be matched up with an audience. Especially if every self-contained world is competing for attention, it’s easy for content creators to be ignored. While I assumed players might organize ways to market content, Chandrasekaran suggested instead that metaverse hosts such as Roblox offer in-game advertising.

Now, Chandrasekaran is mostly talking chiefly about how Roblox handles this problem. And of course, as we’re MMO enthusiasts, we’ve probably already had experience with companies that make games that are light on content and rather high on the idea that we’d be making that content for them. So let’s jump into an assessment.

Before I get too nit-picky, I do applaud Roblox for trying to build a metaverse of its own; it’s enormously successful. Calling it “the” metaverse feels presumptuous, though, as the game is admittedly aimed at a younger crowd. And just look at the content buffet in the video above. Buggy, unfinished, dead. There are some winners that fellow MOP writer Chris Neal covered in his CMA of the game, but for every gem you find, there are… well, messes. I’m really holding back here. For all the theoretically cool ideas people may have in the game, I have seen far too many examples of what I don’t want to experience in user-generated content for me to brave the wilds of Roblox.

It’s not just the quality of the content that’s a concern; it’s the very nature of it. Content can’t just be allowed to go wild. People need to be held accountable. While Chandrasekaran mentioned rating for content, how is it enforced once online content crosses borders where acceptable content in one country may be severely offensive in another? It was suggested copyright materials could be dealt with by waiting for a DMCA warning, which as a consumer I’m fine with, but I’d hate to be a brand owner obligated to protect an image.

And then there’s toxicity. I was told a text filter can help with moderating content, but especially with kids, they’re going to find ways around that, either with non-standard alphabets or slang. I’m not saying that adults are that much better, but it seems like children are a lot easier to control… if the company makes the effort. I’ve seen numerous videos where it seemed like people were able to use admin controls in other peoples’ works to kick others out. Teen and young adult streamers grief for the lulls and hits. And in a children’s game. This is just the consumers mind you. I seriously wonder how many penis levels are in the game.

Chandrasekaran feels that 3-D identities in shared spaces helps cut down on toxicity caused by anonymity compared to, say, Twitter or Reddit where you’re just a name, but I’m not entirely sure of that, especially as alts are an bypass method.

And alts are also a virtual lifestyle, especially for roleplayers who technically are quite well represented when we use the term MMORPG. As much as I love my Denngar handle, I do switch things up depending on the virtual world I’m visiting. I sometimes wants to be tall, sometimes short, sometimes young, sometimes old, sometimes human, sometimes some living shadow person. How can I be immersed with changing those roles if I always wear the same jacket? Don’t get me wrong, I love the idea of a single avatar across the metaverse, and giving tools to content creators to ensure some carryover is empowering, but it also means trusting in the same user-generated content creators that already make me nervous.

Chandrasekaran has some nice ideas about approaching the creation of a multiverse, and Roblox certainly has executed a lot of what was discussed, so it’s not as if his advice is simply papercraft. The game also isn’t wholly unknown either; again, it’s staggeringly popular, just with an admittedly very specific age group and a reputation for less-than-stellar user-generated content. A metaverse where I can return to Asheron’s Call and maybe bring my Sword of Lost Hope with me in a kart racing game sounds cool in theory, but I think I’d prefer my world to be crafted and maintained by professionals. Until then, though, we can at least watch how things unfold in the world of Roblox and learn from its example.