I don’t know about you readers, but one of the first things I always do when starting a game with voice acting (or movie) is turn on the subtitles. I’m not hard of hearing, but between noise and a reading bias, subtitles just make everything better for me.

I say this because even though accessibility may be seen as a way to help people with special needs access games more, that’s not always true. In fact, as someone who really doesn’t play sports games, I’m always pleasantly surprised with the attention to detail sports games give to accessibility. While not everything in the presentations are applicable for our readers, I found a few panels at GDC Summer 2020 on the topic of accessibility that should be useful to just about all of our readers in some way.

I’ve picked out some of the meatier points from EA Sports’ Accessibility Lead Karen Stevens’ panel, Accessibility Best Practices: In-Game Communication, and Ubisoft’s Accessibility Project Manager Cherry Thompson’s presentation, Canary in the Coal Mine: Warning Signs for Accessibility During Production, for our discussion today. As both presenters noted, you can’t just add a “Special Needs” section to your settings and call it a day. What we’re talking about is usability – and anything that makes games easier to use, not necessarily lower the gameplay difficulty, is a win.

That being said, one thing that did come up was the idea of difficulty being related to gameplay. Imagine trying to execute a combo that requires you to press down on six different buttons while inputting directional commands. Or heck, think of games like Monster Hunter that are infamous for forcing players to employ “the claw” on various devices through the series’ lifespan. I doubt the designers intentionally want people to move their hands in such an uncomfortable way so as to force some players to take breaks, even mid-fight, to avoid injury.

It’s a gameplay difficulty born of difficult usability. To put it another way, if said maneuver were physically easy to perform, the gameplay difficulty shouldn’t change. It’s a tool that’s accessible to everyone. If it were intentional, then the designers were considering physical skill in their development, which – unless the game is focused on exercise or uses motion control – isn’t normal for virtual games.

Now imagine trying to play these games if you had some kind of problem with your hands, like arthritis. Playing the game may be downright out of the question. However, as Thompson pointed out, many peripherals that esports players utilize are also used to help those in with disabilities make the game more accessible. In essence, gameplay options and additions that improve gameplay for the target audience can often also make the game more accessible for those with additional needs. Simplified controls/combo in fighting games or other options, like the rails-on one for Mario Kart 8 on Nintendo Switch, can help newbies and people certain limitations.

One area of particular note is motion sickness, especially VR. I covered a study of VR’s unintentional gender bias back in 2016, but it holds up even now, and it’s not limited to VR. Many developers at Thompson’s panel noted that even their colleagues would completely brush their motion sickness aside on basic games. First-person perspective really made playing impossible for some people, so having a third-person perspective option in games like in Skyrim is more than just an option; it’s the difference between being able to play or having to skip a game entirely.

As I said, I often turn on subtitles pretty quick when given the option. One thing I really enjoyed about Stevens’ presentation was seeing that EA Sports games have a kind of welcome screen that allows you to mess with accessibility options even before the game is installed.

This doesn’t just help me with those intro movies where people talk all growly or with voice modulators that even give foreign subtitlers headaches. It means access to colorblind mode, audio options, and more. And speaking of colorblind options, the idea of combining colors with unique icons helps ensure no one’s left out. It gives people multiple ways to call out targets, locations, ability telegraphs, and more.

There are lots of issues a player may bump into, things a team may not even consider because no one on that team may suffer from them. It’s obviously best to start with what the team is familiar with, but then move on with your community. Devs can’t just google for answers because, well, those answers aren’t always good. Stevens noted that the much-maligned font Comic Sans actually is better for dyslexic readers than fonts supposedly created to fix it, according to some studies. In fact, she noted that some companies use it on important business documents to prevent critical reading errors. The importance of proper communication, visually or audibly, is important. 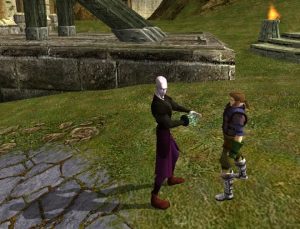 Communication is another huge area I think we can all agree needs help in gaming. Stevens’ presentation largely covered this, but even though she was talking from the perspective of someone in the sports game industry, a lot of it could be applied to MMOs and other online games, which was what Thompson largely discussed.

For starters, having narrated menus can help people who may be visually impaired. Subtitles can help, but actually the industry standard for subtitle size in the game industry is smaller than that for television and moves. People need an option to increase that. However, if those UI features become too big, that’ll take up precious space. Some people just need the audio. This is also why narration itself should explain what the option does. “Toggle light switch” doesn’t say whether a light is going on or off, so simply stating “on” or “off” when the option is selected helps.

Using voiced narration does have a cost though. You can use automatic text-to-voice software and never record a single spoken line for all your updates, and this can be supported with multiple widgets, but aside from sounding unnatural, you may not have access to all the languages you wish to support. I’d argue this is especially difficult for MMOs as expanding regions availability can be massive indeed.

Then we have player communication. There are people who either can’t easily use voice communication or don’t want to because of potential toxicity. Having preset chat phrases or voice filters (RIP, SOEmote voice fonts) can help with this. Admittedly, preset phrases can be a turn off when they require too many buttons to push, distract from avatar control, or become spammy, but they’re also great because you don’t have to worry about babysitting the playerbase. Filters sound good, but for whatever reason, they just haven’t taken off yet in core titles.

For people who don’t want to be bound by preset chat, there are tools that can convert written chat to audio chat, ensuring that those who can’t or don’t talk on voice chat can still audibly be heard. It can also help people mask their identity or do a lot to increase roleplay immersion for people who choose to play as a different gender, age, or race. Conversely, there are tools that convert audio chat to text chat, so if you’re in a situation where you have to have sound off, or maybe have hearing issues, you could potentially have an option to still communicate with players who only want to use voice chat. I think that’s appealing for everyone, isn’t it?

There is an issue with these audio-to-text and vice versa tools: They often have costs associated with them, and not just latency delays in the conversion. Game developers may have to pay a subscription or transcription fee, which not only increases development costs but will most likely be passed on to the player. However, I would hope that as games improve, we can see this in more AAA games and have it be successful.

The canary in the coalmine

Thompson in particular discussed how she acts as a kind of barometer for accessibility during game development, as she has multiple issues that help her employers get an idea of when and where a usability issue may arise. And this is important because if your developers are getting hand cramps, feeling motion sickness, experiencing phantom scents when they hear a sound, or having other issues while play testing a game, you’d better believe consumers are going to experience the same if nothing is done about it.

As game companies continue to release unfinished products and ask us to act as both quality assurance and consumer, it’s important for us, the player, to be vocal about our accessibility issues. Pokemon Go may be both the best and worst example of this. As I mentioned in our coverage of Niantic’s AR 101 panel, a large number of the game’s post-COVID features can actually be traced back to gameplay requests people with disabilities had made long before COVID. Niantic ignored these requests, presumably because they were at odds with the company’s own goals, but once these solutions could aid the broader playerbase, many of them went live.

It’s hard to say how much of the old feature requests were noted when adapting to COVID, but the POGO community is quite vocal and enthusiastic, which I’d argue is a huge advantage Niantic has over some other companies. Just because a company may not be able to hire a specialist doesn’t mean it has no options. Advocates can become experts. Caring devs who may not have anyone on their team with a specific issue can reach out to community members who do. Just make sure to make your presence known and present your perspective as clearly and rationally as possible.

This does bring up the final talking point I’d like to hit: It’s impossible to please everyone. Thompson herself noted that she cannot even wear a VR headset for more than 30 seconds without it resulting in a serious neck injury that takes weeks to recover from. Sometimes, a company may not have the time, budget, or technology to perfect a game. It happens. However, feedback shouldn’t be forgotten. It gives your product room to grow. If you feel a company ignores your accessibility issues, don’t simply give up. Be vocal. Let the developers know there’s a larger audience waiting for them if they can tackle those accessibility issues. For all you know, there’s someone on the inside already pushing for change – they just need your support.