As of right now, funding for Star Citizen just ain’t slowing down. A graph shared on the game’s subreddit illustrates that 2020 has already been a banner year for funding CIG’s efforts, bypassing last year’s $47.7 million.

The graph helps to visualize each month’s spike up to this point, with considerable funding surges shown in the months of May and June. Considering that most people were in quarantine in May and there were ship sales during Invictus Week in June, it’s easy to assume how things fell in to place for CIG.

Naturally, this information is leading to all sorts of speculative discussion. One poster believes that roadmap shifts and development delays could see a dip in revenue earnings leading to year’s end, while another response points out that CIG typically makes about half of its yearly income in the final quarter.

Of course, the new Talon is probably going to bring in a pretty penny too; the newly announced ship, which is set to launch in December, was just revealed with a $90-$100 price point.

For those who want to dig in further, the graph pictured below comes as part of a whole giant Google doc that outlines crowdfunding development with plenty of crunchy numbers. 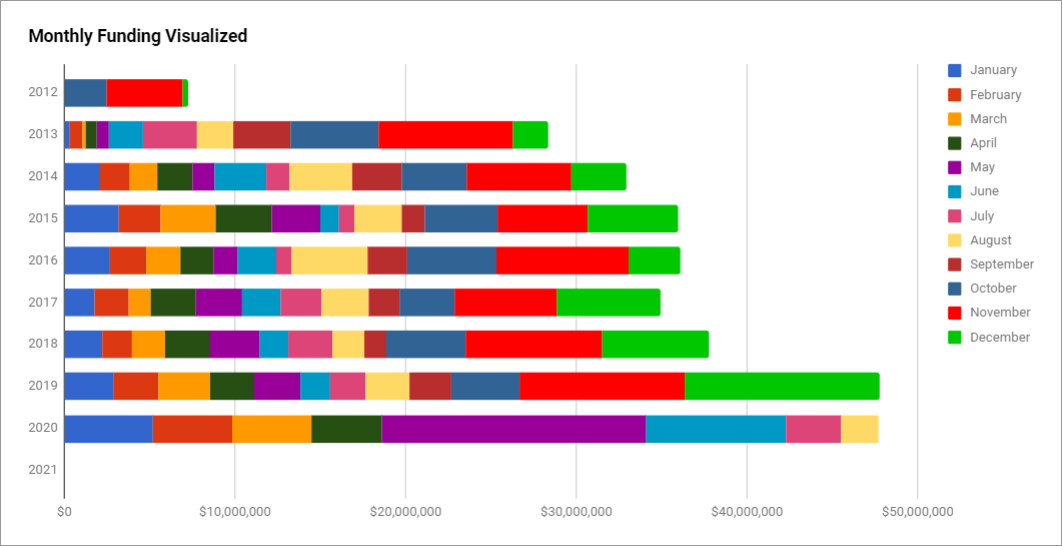 source: Reddit, thanks to Eggbert for the tip!
Advertisement

And so it continues, the cult members who are so brainwashed that they throw hard-earned money at a project without any real scrutiny as to whether it will ultimately be achievable.

However much money they manage to amass I don’t think it will change the fact that this game’s development is all over the place and CIG is being run by someone who has about as much focus as a fat kid in a candy store.

…. Both games are making progress while naysayers are using SC like a pinata to unleash their inability to handle frustration.
Scrutiny is more about how a generation have been brainwashed by soulless games over decades. Done as fast as possible, digested even faster, totally forgetting what ambition means and how much time and collective resources are required to achieve it.

And, if you spend one million dollars on a donation, they’ll tell you all about the aliens. No, wait, that’s a different cult.

A minute, a sucker, something being born, all that jazz.

All them stimulus checks being put to good use. CIG must be like

Have to give credit where it’s due. They have successfully managed to extend a kickstarter campaign into a perpetual and highly lucrative business model. That is quite impressive. Also there are real benefits to workers that come with this new business model since launching the game would likely mean layoffs.

No sir.
Lucrative= producing a great deal of profit. They don’t make profit, at best provision for future expenses.
Pledges do cover costs to create the company from scratch and year to year expenses to pay +500 devs.

It will become lucrative after release of SQ42 episodes and most SC features, techs and gameplay implementation, bringing in those waiting the project to reach their expectations: specific gameplay like salvage for instance, beta or release.

Launching them officially as good for release don’t mean necessarily layoffs as SQ42 is made of several episodes, SC will require regular new contents and DLC’s (playing Aliens), not counting possibilities to monetize CIG experience accumulated over pipelines creation and engine tuning.

Clearly their business model doesn’t require such spending but I suppose it is a good thing that they are offering employment to so many.

As for launching the game, I really don’t see it. As long as the money keeps coming in why would you ever risk a launch? It’s insanity to open yourself up for real criticism when you can keep selling promises instead.

You can also ignore SC as not being launch. It is in alpha state and SQ42 is approaching Beta in few quarters.
They keep delivering their promises: release when ready. Indeed they are over delivering. All stretch goals have been either delivered or scheduled after release, as promised.
They keep adding assets available for credits, including multi hundreds $ ships, as promised.
Quarterly patch while working on core tech like icache, physical grid and server meshing that would allow new gameplay (salvage, repair).

Oh yeah… Totally on time in every regard. Only a few exciting months until 2014 to go and then Star Citizen finally launches!! Oh it is amazing to live in 2013.

“The good thing about it is actually a huge amount of work went into Squadron 42. We really moved it forward, we actually answered a lot of issues and solved a lot of technological issues which means that actually it really pushed us very close to getting something that we can show the community and that’s basically where we are now.”

Fine. Keep ignoring SQ42 is now integrating progress made like PG planet and weather tech V4.
SQ42 as improved versus original scope… backer have not been spoiled quite the opposite.
Plenty of games have been released by companies making several billions $ per year during the same period of times and failed to make anything but re-skinned of past sequels, crap sold like polished (fallout 76), Anthem removed because it have to be reworked from ground and now remaster of old games.

The thing that is so convenient with “release when ready”, is that you don’t ever have to be ready. You can always find a new way to expand the project so that it is never finished, and always in need of backer support. That is the business model here.

It is evident if you would actually, honestly, assess the reality that SQ42 was supposed to be on the brink of release 4 years ago. It was supposed to beta again in 2nd quarter this year, and now you are talking about “in a few quarters”. It’s nothing but pushing the target quarter after quarter and year after year. I’m sure that this same discussion will repeat in 2030.

Quote: “you don’t ever have to be ready”

Come on. Despite some individual pretending Backers are just a mass of washed brain cultist, they are not.

+300M$, +1.2 million individual in Alpha… The best incentive for a company and shareholders is to release a good product more people will buy. The sooner CIG get out of the core game creation and production, the faster they can gather way more cash and make plan for future expansion.

Quality and ambition matter not date. Those pledging 45$ in 2020 or in 2016 did not have to spend an extra $ but they will get a much better product, at “cost” of time. We are not finance people, pledges do not cost us more over time.

Ping me back when SQ42 beta start next year.

It’s called the sunk cost fallacy. When you have dedicated your free time and your wallet for 8 years on the same promise of a game it’s hard to accept that it’s never launching. It is honestly a fascinating thing to watch. I would have never thought that you could pull the same trick for 8 years and counting.

The incentive for the owners of the company is to keep up the status quo, because the status quo is bringing in ludicrous amounts of money.

SQ42 might go into beta next year, although I’d bet against it, but it won’t launch this decade.

It is called sunk cost fallacy by naysayer/haters, simply because they refuse to admit they are wrong or are uneducated about game development and finance.

+1.200.000 individual backers, growing by 170.000 new citizens since last patch.
Whales do exist in every games and are a fraction of those numbers but let’s pretend thousands have bought a 17K$ package right? a package created on an Org leader request sold as per pledges count only… once.

Let’s ignore also that people playing MMO’s do spend $ regularly, either through DLC’s, micro-transactions or subscription… exactly what some backers are doing to support the game they want to play at release.
The average pledge is below 100$ through a 8 years period, less than 13$ per year…
I spend every year 200 $ just to pay for WOT Premium and ‘Humble Bundle Monthly’ package.

That is effectively fascinating to call “trick” what is a fully transparent financing model: crowdfunding linked to what everyone call a game in development…

Hey! This year SC might actually be able to pay for it’s yearly development costs. Even with the 600 employees.

Still, take any CIG pronouncement with an appropriate amount of salt.

This really only makes sense to me if people are doing illegal stuff by funneling money into and out of the Star Citizen ship resale market. Can there really be that many space whales that still fall for this crap? The answer is yes, but I still don’t understand what they could possibly spend so much money on (if its not money laundering).

Not really sure what to make of this, honestly. Is the reason due to Covid? Well no, the funding jumped up months before that. Might have helped with May/June, though.

Is CIG pumping out a ton of new concept ships for the whales? Well no, there are fewer ships so far this year.

Has development finally hit its stride? Not really–still delays after delays.

Has the game just reached a point where it’s fun enough for more players, and so they’re spending more money? Ehhh, maybe. There are still a million bugs and problems with the game, but honestly this might be the best explanation.

It’s funny, I haven’t been able to do much on the site since January and yet the stories on SC are still the same! The enscamulation continues. Love the subhead “another buyable ship“. Emphasis on “buyable“. It’s comforting in a way. Like the seasons. Thanks SC. You’re always there for me.

Feel welcome to re-join us, Alex <3

I wonder if the reason this game is not ‘finishing’ and really launching is if it simply will not run with any sort of performance in a real world setting with more than the few players currently in it?

Don’t know, but seems like given current technology that there would be significant problems running with all the bloat being loaded onto it.