I know we joke that Massively OP is not an uptime monitor, but when it comes to Lord of the Rings Online, we have been keeping a closer eye on the game lately thanks to the extended technical issues earlier this summer that took the game more or less offline for more than a week. And unfortunately, it looks as though the servers are stumbling again this week: first with outages on Tuesday, then with more widespread problems yesterday and today as players logged in to get their first glimpse of the merged summer festivals.

Particularly following the patch downtime yesterday – which overflowed almost into prime time – players have been complaining of the same sorts of lag and chat issues that plagued the game last month. While the servers are technically up, complaints range from unplayable lag (the kind where you stick mid-action and just stand there motionless until the server catches back up) to login issues. The word “unplayable” is being kicked around Twitter today like a well-used hacky sack. It also looks as if the chat server is napping on the job.

I logged in a bit ago to check on how Landroval was holding up, only to see people complaining about rubber-bandy lag in chat – that is, right until I lost connection to the chat server altogether, repeatedly, and experienced the same sticky lag myself. 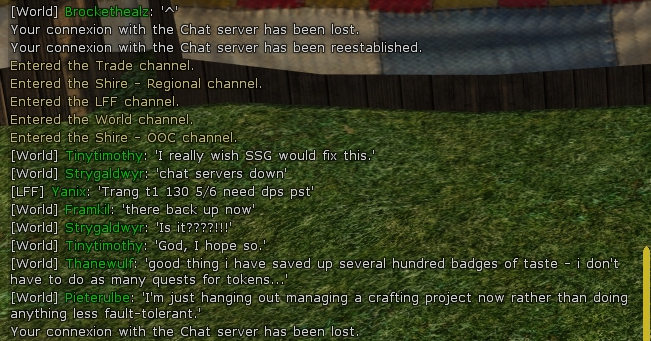 Standing Stone Games is not exactly known for its stellar communication, so it’s no surprise that the studio (It has now: See the update below). But it probably goes without saying that if you’re trying to scope out the festival, you probably shouldn’t try anything overly dangerous right now. In the meantime, cross your hobbit fingers that SSG can get this issue repaired before it spirals out of control again.

“The game worlds are experiencing periods of server instability due to external issues outside of our control. We are taking steps to mitigate these environmental and infrastructure challenges, and apologize for any issues you encounter.”