The devs of Neverwinter have peered deep and hard into their crystal ball and they see… they see… they see a content roadmap. Yes, yes, a chart of things for players to do stretching all the way into September 2021. Things like two new modules, a new story arc, the promise of “evolving-world content,” and a new class.

END_OF_DOCUMENT_TOKEN_TO_BE_REPLACED

The roadmap also features a number of reworks and updates including scaling improvements, siege event reworks, updates to Masterwork professions, and skirmish reworks. There’s also plans for a refinement of the tutorial, better reward drops, new adventures, and a streamlining of the leveling experience, all in an effort to help players get to epic level content faster. All of this is planned over the course of next year.

Naturally, there were a number of questions that players had regarding this new roadmap and so the devs held a Q&A session on video. It explains why the devs are worrying about scaling content, elaborates on several points in the roadmap, and why certain races weren’t introduced with certain modules among other things. You can watch the full video after the cut, as well as get a look at the complete roadmap which can be expanded on by clicking the image. 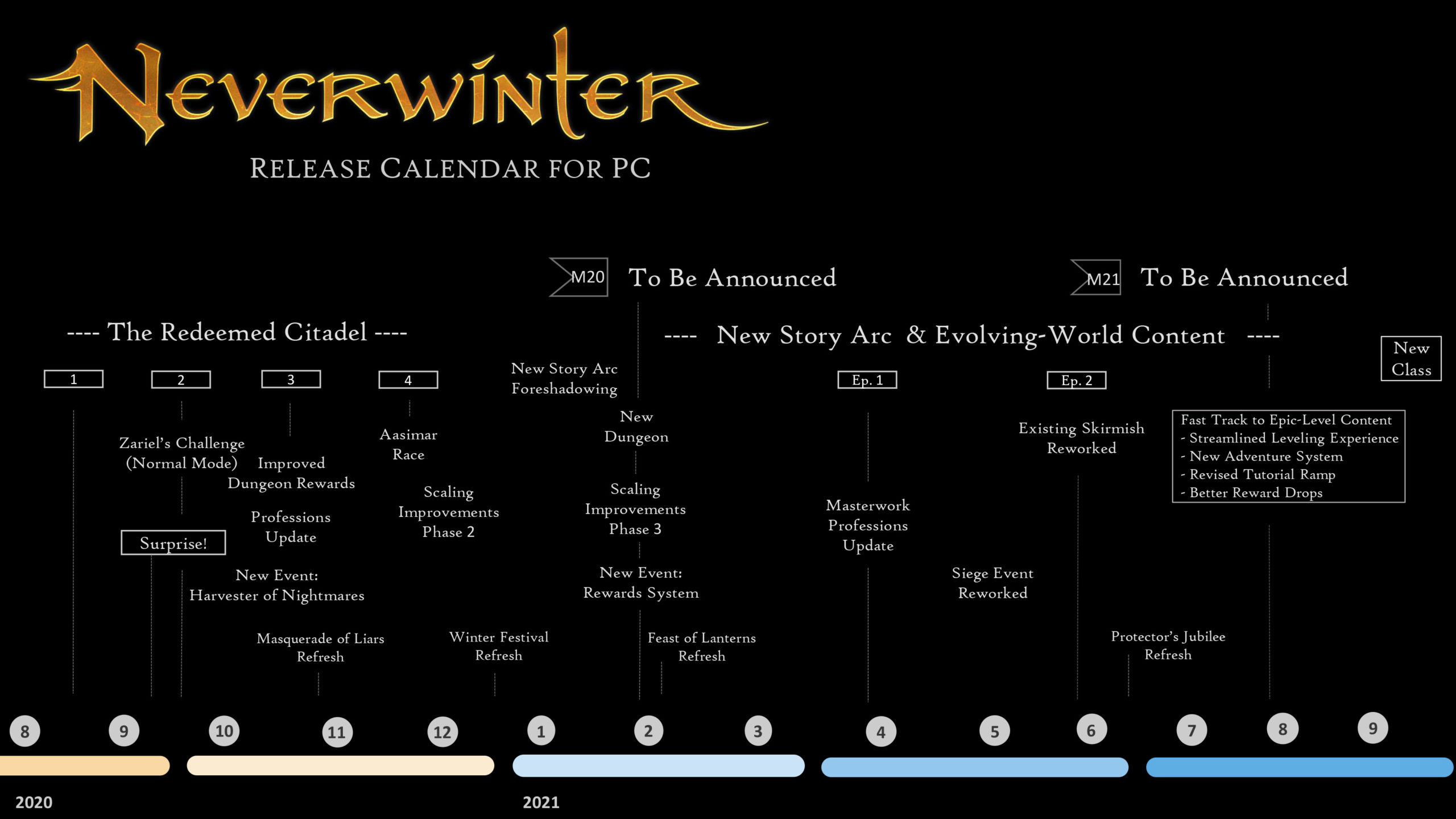 It’s been a while since I’ve played Neverwinter — and I really do like this game! — but I find the game frustrating in two main aspects. (1) It seems like there is a huge difficulty spike for the last campaign, and (2) I find the companions to be pretty weak and uninspired overall.

I like the fact that Neverwinter makes every class a kind of “pet class” (as does SWTOR) but, unlike SWTOR, the pets/companions in NW aren’t worth much, imo, and it’s prohibitively difficult or expensive to “upgrade” them. Getting continually curb stomped with unhelpful companions by my side is a bore. I’ll be back, though, once Neverwinter addresses these issues or once again increases the level cap.

Alas, I see nothing about either issue in these dev plans…

and it’s prohibitively difficult or expensive to “upgrade” them.

That’s because they make a good buck from cash shop companions. Neverwinter is prohibitive in several aspects because of it’s monetization.

None of the current classes really clicked with me. Hoping the new one is something interesting.

They actually do have a barbarian class (formerly the “great-weapon fighter”). I agree on the bard and druid, however.

It’s not a real Barbarian. GWF uses mail with plate pieces. Barbarians use studded leather, are highly mobile, are Axe oriented ( altho that may vary ) and have most of their abilities revolving around the Rage mechanic.

Cant hear anything but “uuuhm” “aaahh”. My poor brain

Wonder if they’ll ever bring back the Adventure creator?

It sure seems doubtful. It’s a bummer, but it makes sense to axe them if they’re barely used and they remain a constant drain on internal resources to keep it up and running as the rest of the game changes.

Don’t get me wrong, I still think that the Foundry system was good, it just never got the constant support from the developers that it would have needed to really been a longterm hit. I still think some MMO developer will eventually figure it out and it’ll be a god-damned goldmine. Roblox is functionally literally that in a game, as best as I can tell, and that game is successful as all hell.

At last count, there are less than 10 people in ALL of Cryptic who were around when the Foundry was created. Basically, no one knows how to fix it. They tried for over a year.

no class, no care

Actually sorry. It still applies a bit because its a small note off to the far side enough that we have to believe it when we see it, but I must admit I didn’t read the chart closely enough and was so dejected after so many years that I assumed that if it was ever coming, it’d have been shouted loudly by the developers instead of an itty box for Maybe 2021.