In another new twist, Pokemon Go has just released Generation 6’s big feature, Mega Evolutions, before Generation 6 pokemon themselves. While we’ve had mega hints coming at us for a while, and dataminers on Silph Road gave us some big hints on the feature, we’ve finally gotten some solid details from Niantic on how it’s being added. I won’t lie: I think the mechanic is quite an interesting way to adapt the main series’ once-per-battle uber-buff mechanic, but access has been, in a word, terrible.

We’ve accumulated a wealth of knowledge from various communities, Niantic, and personal experience to help not only get you started on your Mega Adventure, but understand where it might lead you.

A new resource called Mega Energy is required for temporary mega-evolutions, which boost the stats of your pokemon, its raid allies, and raid allies’ moves that share its same type as the Mega (which for some pokemon, like Mega Charizard X, may change). From my understanding, that means the Mega’s users doesn’t get buffs, but every other raider gets a general buff, and any of those Pokemon who share a move of the Mega’s type get an additional buff. The group buffs don’t overlap, though, so it’s best to have one Mega active in a raid at a time. Mega Energy, however, is specific to a pokemon species, so if you’re swimming in Mega Beedrill energy, it won’t help Mega Blastoise.

Unlike in the main series, Mega Evolutions last beyond a single battle. You can walk your Mega, fight in gyms (but put them in as defenders), beat up Team Rocket, and battle your friends (but no ranked PvP matches). You can’t have multiples at once though, so if you suddenly decide Mega Charizard Y isn’t good enough for you, making Blastoise Mega will revert the Charizard to its un-Mega form.

Mega Energy is being billed as a reward from Mega Raids, which grant Mega Energy for the defeated Pokemon (i.e., being Mega Venusaur grants Mega Venusaur energy)*. The faster your beat the pokemon, the more energy you get. This means that for series vets, you can’t evolve every mega right out the gate, only from what you can gain energy from. These pokemon are limited to Venusaur, Charizard, Blastoise, and Beedrill at launch, and you can view them in the Megadex located within the Pokedex. The new speed raid system also grants additional premier balls and overrides the previous team bonuses. Update: Niantic has heard complaints and is monitoring the situation. My personal advice would be to save your Mega Energy until further notice. 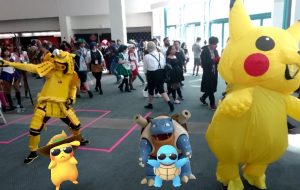 Although the form is temporary, once you’ve done the evolve, the Mega Energy required to Mega Evolve that specific pokemon will decrease from then onward, but it’s not clear from the wording whether it’s that species or that particular Pokemon. We were also told Shadow and Clone Pokemon can’t evolve, but no word on sunglasses Blastoise’s ability to wear sunglasses when in its Mega form.

For series vets, Mega Bracelets aren’t involved at all, but there are some available in the shop now.

Mega Evolutions are kicking off with a Special Research questline, A Mega Discovery. If you complete the Special Research, you’ll receive Beedrill Mega Energy, which indicates that raiding is not the only way to receive Mega Energy. This is key considering some of the upcoming events we were told about. We weren’t given the full details but from Tuesday, September 1, 2020, to Monday, September 7, 2020, Niantic is going to try to inspire you to do as many Mega Raids as possible.

From Friday, September 11, 2020, to Thursday, September 17, 2020, Niantic is going to push you to do Mega-Evolution Battles (gym battles, Team GO Rocket battles, and
Trainer Battles, not League battles, but they may happen in the future).

My own opinion is that these featured events may be Niantic’s way of giving alternative methods of gaining Mega Energy outside of raids, and that’s important. There are plenty of players who struggle to do any raids, especially during COVID. Friends who quit long ago partially did so because they simple couldn’t find a group to raid with to get a single raid-exclusive pokemon before it rotated out, and especially with Niantic no longer offering missed legendaries via research, they became disillusioned and left.

And that’s important. We’ve asked for clarification, but it seems like the Mega Raids are just raids that don’t involve catching Mega pokemon. What Niantic has done is essentially asked players to trade their daily free raid or premium pass mostly for a consumable rather than a potentially permanent and desirable reward (at least, until rare pokemon rotate into the Mega Raid rotation). When players struggle to do raids at all and suddenly have to choose between getting something new and getting a consumable, I doubt many will choose the consumable. Players are already quite critical of the approach.

By making Mega Energy types largely tied to raids (which will have to rotate), they essentially become a premium buff largely available for a limited time. High players may have them, hoard them, and occasionally use them, but not the general player base.

And Arceus help you if you want to Mega Evolve a regional pokemon not from your region. If you love Kangaskhan (Australian regional), but live in the US, even if you have one, you may not be able to Mega evolve it, unless Niantic’s secondary Mega Energy system(s) aren’t tied to events and/or the company changes how regionals are handled. The way to obtain Mega Energy, at least based on the way it’s being presented at this time, seems more like something created by the monetization team rather than the game designers.

Considering the upcoming coin revamp that will increase the difficulty for players to receive their full 50 coins per day, Niantic changing rare-hatch rates secretly mid-event, and paywalls for potential Community Day featured Pokemon, it feels like the company is relying more on selling streams of gamble consumables than permanent upgrades. The main game asks players to pay (in-game currency) once for an item that enables a specific Pokemon to Mega Evolve. The item is re-useable and works with any Pokemon of that species. Much like with storage, I think tangible, permanent items make players feel less like they’re throwing their money away.

That being said, Pokemon Go’s endgame is more raid and PvP oriented. As a social player, I think I care more about access than collectors or battlers. Alternative sources, especially ones that don’t reinforce potential seasonal raid rotations preventing free use of Megas, appeal to me.

As a function, I like the Megas concept Niantic has gone with. It’s still temporary, it still adds a lot of power, and it’s quite social, which is one of the main reasons I have stuck with POGO longer than any of the main-series games (in addition to its updates). However, the implementation also feels like it may step on the toes of Generation 8’s Dynamax feature. As the first main series Pokemon game with raiding, the Dynamax system really made it feel like choosing who and when someone would Dynamax to help the group was important. Niantic’s Mega Evolution interpretation kind of steals Dynamaxing’s thunder in my opinion. That being said, it may also mean Niantic has already figured out a way to differentiate the two features while staying true to each one’s characteristics within its own game.

*Update: Niantic did not reply to our pre-release Mega-related questions, they have posted their own Mega Evolution guide. Within, Niantic does confirm that Mega Evolution discounts are not per species you’ve evolved but per specific pokemon. It also mentions Mega Energy coming from research tasks, indicating that the company may be experimenting with the best model of how to give out the resource.