What’s better than getting a new Path of Exile league? If you are a Mac user, it’s getting the game on your favored operating system. And Grinding Gear Games is doing just that! When the new Heist expansion drops on September 18th (September 23rd for consoles), POE will be fully playable on Mac, with complete crossplay compatibility.

Of course, there is more to the expansion that just that. You have the full league of criminal capers (well, you are technically a criminal already, no?) to experience brand-new mechanics and collect all-new loot. There’s a ton to take in. But that still isn’t everything. Heist brings with it changes and enhancements to the standard league. Spells and curses have been changed, new uniques will be added, and steel skills got a rework. Ahead of tonight’s reveal, I sat with Managing Director Chris Wilson who filled me in on the details.

If you like to cast curses on your enemies, you may be interested to know that doing it manually again — versus triggering them with trigger or support gems — will net you some hefty bonuses. Self-cast curses will now grow in intensity over time; the longer they are up, the more potent they become. Wilson explained that the team wanted to encourage players to self-cast again. In addition to that, new gems that can interact with curses are being introduces. Existing curses have some tweaks, including improved visual effects.

A new support gem that benefits self-cast curse skills is Impending Doom. The name very accurately describes its use: When the linked curse skill ends, this support gem causes the cursed mobs to explode. (I can see myself going for a curse build now!) Even more fun, this explosion can be either because the curse naturally timed out or because the player forcibly removed/consumed the curse before it expired.

As a fan of the Witch, I am personally fond of casters. So learning that spells were getting some more love brought a smile to my face (and will likely swing me right back to Witch!). Wilson explained that some classic spells are being reworked. These will add defensive benefits as well as offensive ones for folks remaining in a particular area. As he put it,

“Basically the goal here is that we want to have these effects have offensive and defensive benefits for remaining within a particular area and standing still for a while. And while it’s possible for these to benefit a whole bunch of different builds, the important part is we want people who are casting spells by hand to not be penalized for standing still while dealing damage.”

Four new skills with these properties are also being introduced. One is flame wall, and just as you’d imagine, it creates a flaming wall in front of the caster that will create a barrier that does damage to any mobs that come through it. Even better, players can fire projectiles through the wall and see those projectiles catch fire! Yup, you get real flaming arrows from shooting through a flame wall, and those deal extra fire and burn damage for a brief time.

The second spell Wilson introduced was the void sphere. Think hungry black hole. The spell literally creates a black hole that sucks nearby enemies toward its gaping maw. Enemies that die near it will be completely vacuumed up like the debris they are. Sorry, this will not work on unique bosses, though.

Back in Betrayal, GGG debuted the impale mechanic, which ensures enemies take extra damage each time they are hit while impaled, and Legion expanded on that. Wilson told me that the Legion changes ended up erasing some of the unique identity of impale, so Heist is reworking the mechanic to bring that back. The original shattering steel and lancing steel skills have been retooled, and two new steel skills are being added. The new iteration of impale utilizes a new “shard” mechanic. Using Call of Steel, a new skill automatically available whenever a steel skill is equipped, brings forth swords from the ground around you that burst into metal shards that float along behind you. It’s basically an ammo type you can also replenish by ripping currently impaled shards out of nearby enemies using call of steel; this will also deal area damage. The steel skills themselves determine how the shards are used.

Let’s take a look at the lancing steel skill next. Previously, it was a a projectile that launched in a specified direction with some smaller projectiles following behind. Now, the new shards can create more intense damage for a prolonged period of time. By consuming shards, lancing steel turns into a mini-turret firing projectiles faster and for a longer time. The more shards you get, the longer your turret runs.

The new steel skill is splitting steel. Once you call shards, you consume a shard to fire a single projectile that explodes on impact, creating smaller projectiles that then hit any surrounding enemies. It’s fun to note that these smaller impacts will also generate explosions, albeit smaller ones.

As with any new expansion, there are new uniques put into play that can change up gameplay and builds. Wilson revealed the first, and let me tell you, these boots are made for walking! Corpsewalker unique boots will generate corpses at your feet everywhere you walk! It looks a bit gory, but if your build utilizes corpses for your army or fuel (or my favorite, landmines!), then these will give you an unending supply right at your feet. 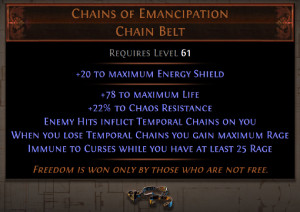 The second unique shown off was the chains of emancipation belt. This allows players to take advantage of a loop that will both negate temporal chains curse and maintain rage — as long as players can get rid of the curse the first time. Once the cure is removed, it can no longer affect the player and each subsequent cast of it just replenishes the player’s rage mechanic.

Another very interesting part of our interview came when Wilson was describing a new loot creation mechanic the team has been experimenting with internally but is only going into practice now. In talking about players examining loot at the end of grand heists, Wilson explained that the devs didn’t want players to find loot with a good enchantment but random junk mods:

“So we’re using a system where it kind of prerolls the item to be better than average. So we kind of make a lot of copies of it and throw away the bad ones, keeping just one of the good ones to show the player.”

In a fun fact tidbit, Wilson revealed that Heist was originally supposed to be June’s release. This expansion was being worked on in March; however, when New Zealand went into lockdown over the COVID-19 pandemic, it was deemed that working from home limitations would hinder the scope of Heist too much, so it was postponed, and we got Harvest instead. Wilson also noted that in a twist of irony, New Zealand is back under lockdown now, and the team has had to finish Heist on from home anyway. Nevertheless, it appears this final hiccup hasn’t derailed the expansion. It still sounds pretty great, and I for one cannot wait get in and let my inner catburglar free!

Don’t miss our companion piece on all the new content coming with Heist!

What if your world changed every three months? What would you do differently? Path of Exile does, and MOP’s MJ Guthrie explores and experiences each new incarnation in Wandering Wraeclast. Join us biweekly for a look into each new challenge league and world expansion — and see whether MJ can finally reach the end of one world before it ends!

It is going to be very hard to resist installing this on my work iMac. Very hard.

Neverwinter gives you a taste of its reimagined Sharandar