Are you tormented by the unrequited desire of executing a daring caper, perhaps pilfering a rare antique or infiltrating a secure vault, all because you’ve been hindered by the legal or moral ramifications of perpetrating such an escapade? Have you dreamed of Oceans Eleven-ing your way through a storied jewel or art heist? Well Path of Exile is offering you the opportunity to live out those fantasies virtually — without the fear of real legal entanglement. Welcome to this OARPGs’s next expansion: Heist.

END_OF_DOCUMENT_TOKEN_TO_BE_REPLACED
What all will Heist and its accompanying league entail? I recently met with Grinding Gear Managing Director Chris Wilson and discovered the ins and outs of this next chapter in POE history. Remember that August tweet that teased what could be included, either 900 gems, a giant, 13 NPCs, a new town-like area, or a cat with a monocle and bow tie? The answer is… all of them! You’ll travel to a den of thieves to take on some elaborate clandestine jobs, select hirelings to join your exploits, and try to filch a few treasures from evil syndicates. Just be sure you don’t get caught, or you lose everything you found. (And keep an eye out for that cat!) Sound like fun? You can start scratching your cat burglar itch September 18th on the PC, with console release coming September 23rd.

Entering the den of thieves

Heist takes place in a new town-like area, Rogue Harbor. As one might expect by such a moniker, it is populated with thieves. But these are the thieves you are looking for! Players travel to Rogue Harbor using markers (a new currency that will drop in the main game) and start coordinating jobs from these new NPCs. Not only will players take jobs from them, but they will get to take them on the jobs!

Four of the new NPCs offer their services in the set up of heists or the ultimate grand heists, which are specialized itemized world areas, much like the maps of endgame. These heists are accessed via contracts (heists) or blueprints (grand heists) that players have looted/traded throughout the game. These NPC coordinators then can help with information on the job, travel to it, and other things to prepare you for it. 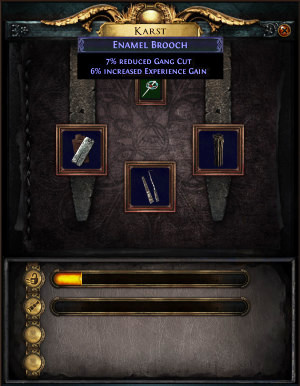 The other nine NPCs, however, introduce a new system to POE that Wilson says GGG is experimenting with. They are like the hirelings, mercenaries, or agents in other games. (Note: Wilson emphasizes that these are only available in this specific content in Rogue Harbor and will not work in the rest of the game.) Players use markers to hire these rogues to assist them in their endeavors. Will you want to use the services of your own thief posse? It depends. You might want to avail yourself of their specialized skills (such as lockpicking, finding traps, or demolition), but doing so comes at a price: You must pay with markers up front to hire, and they also take a percentage cut of the found loot. Players can hire up to only three per heist, though they can hire different sets of three for each wing of a grand heist.

These rogues are more than just mindless NPC meatshields. Each rogue has one main skill and up to three sub skills that gain experience each time they are used. You can also outfit them with four types of special equipment to help boost their abilities or add other effects. Possibilities of gear bonuses include skill bonuses and reducing percentage of cut or noise level. This equipment can also be modified akin to player gear using currencies.

Because this mechanic is available from very early in the game, everyone has a chance to experience it even if they don’t make it to endgame maps. Wilson told me that contracts will drop about once per area on average, but blueprints will likely be only once per Act.

So how do heists all come together? Players collect contracts and the rarer blueprints, adjust the mods and rarity how they wish by using the in-game currencies (just like maps), and then embark on the escapade. The contracts state what artifact is its objective and also lists the type of expertise needed in a hired rogue. It is up to the players to decide whether they want to hire rogues to help them successfully navigate the secure vault or chance it on their own. (Note: The percentage of cut the rogues take is set, so you can take one or all three and the amount won’t change.)

Wilson noted that grand heists not only require a blueprint but need more intel and planning. And lots of markers. Players take the blueprint to Whakano the Barber, who utilizes the info gathered in previous heists to reveal things important things; this intel might mean uncovering a better escape route, discovering traps, revealing the different wings involved, and pinpointing reward rooms. Players will also likely need several rogues to pull off a grand heist.

Rob the evil to give to the… paying

If being a thief gives you pause even while you inhabit a land where criminals are banished (don’t worry, we know you were innocent!), know that the whole premise behind Heist is stealing things from the evil syndicates. They deserve it; you wouldn’t want evil profiting, now would you? It just so happens that you will be paid for your time and effort — as long as you are successful, that is. When you fail, you lose it all.

An important and unique facet of Heist is that players will need to be sneaky when executing their capers; if they’re caught, everything is lost. We are not talking about just the payment you forfeit for a botched job; all that loot you picked up along the way is also gone. And there are no second chances for a heist (though there is a special mechanic in grand heists – we’ll get to that). Wilson told me how players will want to move through as “quietly” as possible, and each guard you kill and each chest/locker you open causes commotion that raises the alert level. Once you reach the max threshold, the alarm is triggered. The alarm also triggers once you pick up the target artifact. This means all doors open and all guards will try to mob you to prevent you from escaping. And these guards all use a new AI that allows them to rove and path around while also being in formation!

If you are killed in a regular heist, you drop any of that contraband loot you picked up, and your contract expires. If you die in a wing of a grand heist, however, you lose only everything from that wing as long as you have stashed your items from completed wings. And you’ll want to stash: The reward at the end of each wing is a choice between special items. (Note: Players get unlimited portals in the grand heist, so stash often! Also, if you fail a wing, you can still attempt other wings. Once all wings have been attempted — completed successfully or not — the blueprint then disappears.)

Wilson acknowledged how this new loss-aversion tactic may upset some players, but he also believes it can also make it more exciting for players to know what is at stake reward-wise as they try to complete the heist without losing their treasure.

Many other new additions are being introduced in the Heist league. For the first time since the game’s initial launch, a new equipment slot has been added for trinkets. These will allow players the chance to specialize in improving heist rewards without compromising their builds. With trinkets, you can make such alterations as changing one type of currency drop into another. (Wilson did confirm that if Heist goes into the base game, this item slot will also go.) 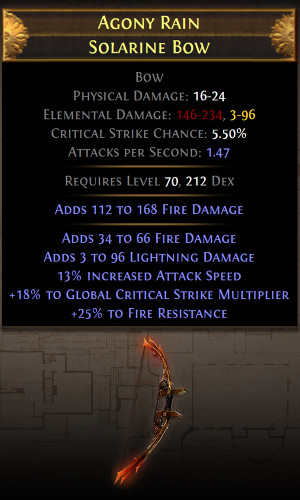 Next are replica unique items players will find at the end of grand heist wings. Wilson describes these replicas as pretty close to original but not quite; they are based on existing uniques but with a change or two to alter the function and useful to different builds. Around 100 of these replicas are in game.

Another new reward at the end of wings comes in the form of experimental base types, which provide something quite different to conventional base item types (like a bow with low physical damage but astronomical fire damage); there is one new experimented base type per weapon type, and several new varieties of jewelry experimented base types. Note that for each bonus you also get a penalty.

Additionally, grand heists can also reward enchantments on two new slots, weapons and armor, which do not take a modifier slot. And finally, players can also acquire gems with an ultimate quality. Labeled as alternate quality, this set of gems has a different stat increase as they gain quality, which can can sometimes result in a pure damage boost or change the nature of the gem to unlock new build potential. There are around 900 alternate gems, approximately one to three for each existing skill and support gem.

Want more information on Heist? Check out our companion piece on Mac, crossplay, and the standard league!

No thanks. Just give us PoE 2 already.

This new season is so completely outside of the games genre. Its like when a 2d JRPG puts a racing mini game in it.

While it might be a neat mechanic, I think its so out of place within a super fast paced hack n slash game that it will have many simply not wanting to take part in any of it.

For me it very much depends how much prep work is involved for this to work. If it’s a lot then I might fall away from it like I eventually did with Harvest.

Honestly after Harvest I was kind of hoping for a simple see the thing, kill it and get the special loot without much else getting in the way of that loop.

As always I will try it when it launches on the console and make up my mind then.

(Hoping the PS4 version has had a bit more attention to performance and crash mitigation too as Harvest was also the worst league in that regard for me on console so far).