One of my friends once said to me, “Carlo, I always see you play those random 6 out of 10 MMOs, and I don’t get why. You know the game’s going to be trash.”

I didn’t argue; he’s right. Why do I play a game like Kritika Online when I could be taking a stand against Mordremoth in Guild Wars 2 or wiping my party in Final Fantasy XIV? (Sorry, Kritika fans.)

I know why: It’s the unknown. You never know what you’ll discover in those MMOs. Most of the time the experience is forgettable, but every once in a while, the search is worth it – especially when I find that diamond in the rough.

One day, as I lazily scrolled past Facebook posts about the world’s problems and politics, Nexon’s ad for V4 came up. “The Ultimate Fantasy MMORPG Without Boundaries,” it said. “Raise your weapon and deal critical damage across a gorgeous open world in the newest cross-platform MMORPG!” Yeah, sure Nexon. We all know this is going to be some overly grind MMORPG with autoplay and an endless grind.

So of course I went ahead and downloaded it anyway. Every mobile MMO makes the same promise. I just wanted to see how much of a hot piece of trash this game was going to be.

But I found my diamond. It’s actually good.

I’ve played through a lot of mobile MMOs, so I can say with confidence V4 really sets the bar for that subgenre. And I’m not saying that from a day’s worth of gameplay. I’m ranked among the top 100 warlords as of this writing. I’ve already clocked in well over 200 hours into this game. So I’m very familiar with the game’s systems. A combination of classic design leveraged with modern convenience and the requirement to play just made it work for me. This game really demonstrates everything a mobile MMO can do while still having a free-to-play model and the type of autoplay I like.

But what exactly is V4? For one thing, it stands for Victory 4. I’m not exactly sure whether this is the 4th game in a series, nor do I know what the other Vs are really meant to be, but what I can do is express what I think about the game in my own four Vs.

Running on Unreal 4, the game has some pretty impressive-looking beasties and character models. And while it doesn’t exactly have the most inspired aesthetic, the Warlord’s armor shine like they should and the spells go off with impressive particle effects. During world boss events filled with players, the frame drops are barely noticeable. But I do have the privilege of playing the game on an iPhone XR, which has some horsepower behind it. The same goes for when I played on my PC, which sports a 1080ti and a i7-6700K. It ran well on both.

Of course there were some concessions made here. Monster pop-in is worse here than in my home game of Black Desert, and I couldn’t find any way to increase it in the settings, which is kind of a bummer. I wish that were an option on the player’s end, especially if we’ve got the hardware available for it.

The camera work is pretty impressive too. If the pop-in bothers you too much, there’s the isometric perspective, which hides it; a free camera for more traditional MMO camera angles; and a fun “action camera,” which honestly makes the game unplayable unless you pair it with auto combat. Then it becomes a treat. I found myself just watching my character crush enemies under his hammer with the camera, and it’s fun to see him grinding away.

Mobile games tend to suffer from an overly cluttered UI. But V4 really hit a good sweet spot with the UI. It’s not overly cluttered on phones, and shows all the important information and everything else is put in a separate menu.

This game’s design is rooted in the same tradition as Lineage II: There are ranking systems, open PvP, large maps, and plenty of mobs to kill. For those waiting for the Unreal 4 remaster of Lineage II (me), this game can scratch that itch until we can get our hands on that game. It’s a very classic experience, and it just doubles down on what players enjoy about these games: the grind, the loot, and the PvP. The game provides all that in major heaps. And I like that it’s not trying to be anything else but an enjoyable game. 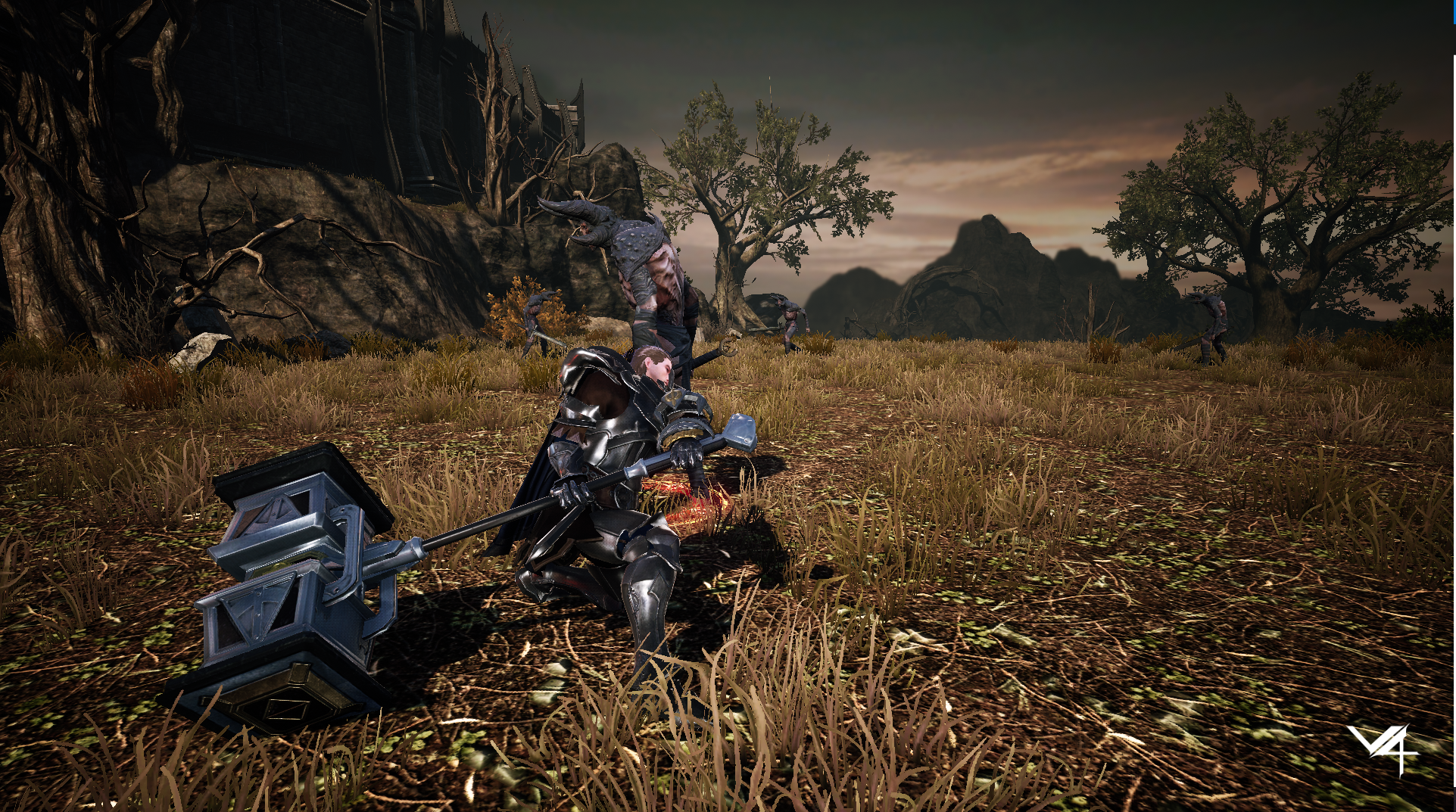 Of course, it’s still just that, though. It doesn’t really bring anything new to the table. It’s just well-executed, and players who know exactly what they’re looking for will get it here.

The drop rate is also abysmally low. One of the most sought-after items are the Brellan weapons and armor, they have the second highest rarity in the game. I’ve put in a lot of time grinding out the mob that drops it, and I haven’t gotten a single drop yet. According to players, the drop rate is 0000052% or something. And there aren’t any items (to my knowledge) that increase drop rate. The same goes for enhancing. This game’s enhance system makes BDO’s look like child’s play. Failing an enchantment destroys your item. And once again, there’s no way to increase your odds. Not yet, anyway. I’m torn on this. It is a classic design element. But is this really one of those things that should be kept around?

Unsurprisingly, this game does have autoplay. But don’t write it off because of that; this type is well-implemented, and that’s partly because of the design. Considering how it’s based on Lineage’s gameplay loop, I think this is a good example of the game design coming before implementing autoplay. It’s completely optional to use, but it’s best to strike a balance between direct input and autoplay. And that’s the key: balance.

It’s not a good idea to just leave this game running. Your character is going to die. If the potions don’t run out first, then you might get PK’d. The best grindspots are also in the most dangerous areas. So the decision is still left to the player. The game doesn’t just funnel everyone into one spot; the players ultimately decides where they’re going to grind and how they’re going to make the most of the session. 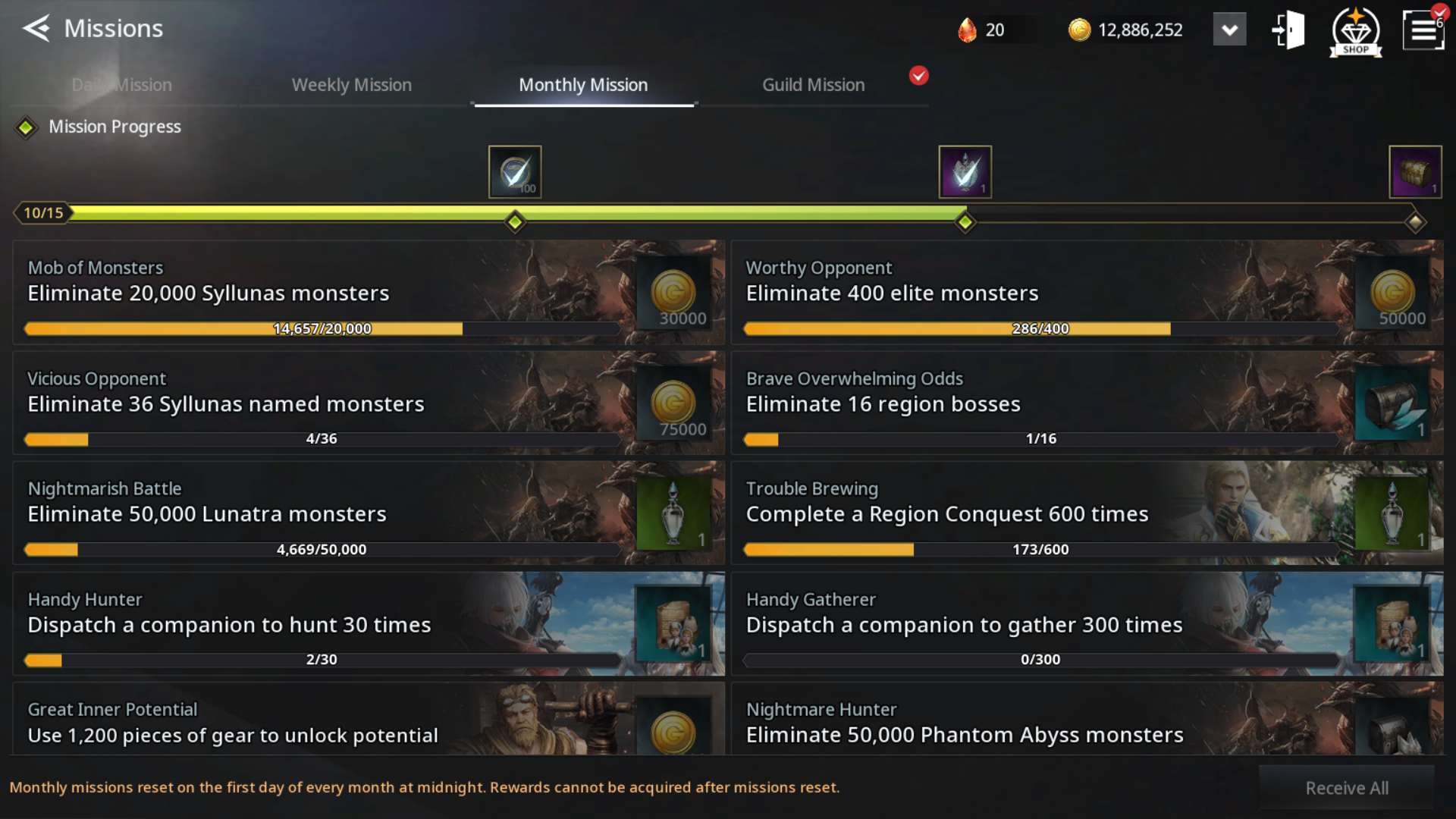 Nexon came up with a great design decision to counteract the downsides of autoplay: the monthly quests. Remember the items with abysmally low drop rates? Completing 15 monthly objectives will reward players with a piece. These are not short objectives, and a bunch of them can’t be done with autoplay. Some of these objectives include taking down named monsters, and because of random monster spawns, players will actually have to run around the map and hunt them. I had my guild member run around for three hours hunting for his targets to complete these monthly objectives. Awarding the best items in the game through live play is a great incentive, and I hope to see this in more mobile MMOs.

The most annoying thing about mobile MMOs how ironically inconvenient they can be. While games both this game and Black Desert Mobile feature a sleep mode, the game has to be running on the phone. The game disconnects if you push it to the background.

The main reason I found so much success with this game is how flexible it is. I can play on my phone or on the PC. And it’s not huge resource hog, so I can have it running while I’m working from home. This is such a great addition! Crossplay like this should be added to any mobile MMO that wants to increase player retention. Many mobile games are making that jump already, but V4 is currently the best and most recent example of good execution.