As part of our Massively Uplifting column this past week, we covered an emerging story on the Warhammer Online Return of Reckoning rogue server, as a veteran player named Gary aka biploargary shared that he had terminal lung cancer and wished to say farewell to the Warhammer community he loved so much. That community sprang to action, with players swapping memories and making plans to memorialize him in-game. 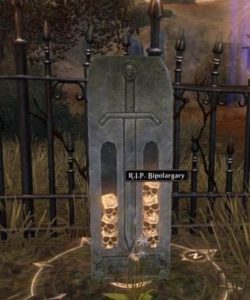 Unfortunately, as we noted just a day later, Gary’s sister let the community know he had indeed passed. But now he’ll live in the game forever, as the player devs have added him as an NPC and created a permanent memorial for him.

“When we made the NPC, Gary was still fighting for his life,” ROR rep GamesBond told us. “We did not know he was going to pass away that soon, as his illness guarantees his death. Today, the team has added Gary’s nickname in the graveyard area of Praag. Praag is a region partially destroyed and has a graveyard interest point on the map. On Wednesday’s patch note announcement, we will mourn and honor the brave warrior who fought cancer in an effort to show support to anyone who’s fighting the same battle.”

In fact, last night, players swarmed the server for a truly massive memorial to Gary.

Tonight it's not about patch notes, Drops or even new content.

Tonight, we're posting one of the many reasons why a game is sometimes more than "just a game".
Here is a glimpse of the community mourning for Bipolargary – aka Gary.
– – –#ReturnOfReckoning #RoR #WarhammerOnline pic.twitter.com/EJHHCnPzDB

And that’s just a small clip; Twitch streamer Gravord captured much more in his stream.

MMOs take a lot of crap for their toxicity, and player-run emulators don’t exactly have the best rep either. But moments like these should remind us all that our communities can and do rise above the muck and come together to celebrate each other. And you know what? I bet everybody from Mythic who ever worked on this game is beaming with pride right now too.

Source: Twitter. With many thanks to the ROR staff who shared this with us and granted permission to use the images.
Advertisement

Good for these guys, that’s a great testament. Also kudos to your server tech, that’s a lot of people in one place with decent stability for a private server.

Alongside the team and the wonderful RoR community, we’d like to thank MassivelyOP for covering this story.
– – – – –
A message from Gary’s sister, sent on September 10:

Hi everyone this is Gary’s sister Dawn.

I have seen the grave and footage and would like to thank the people who run this game and everyone who went to his grave. My brother’s main passions were bodybuilding, running and gaming.

He was so excited when he found this game was back and played on most days. My brother was only 42 and knew something was very wrong last Feb after suffering from blood clots. Doctors could not find out why he had them but assured him nothing was seriously wrong. My brother gradually deteriorated and could no longer exercise. He then started having problems with his vision, but doctors again told him it was simply a health anxiety.

(…)It was not until 3 months ago, till he went to eye emergency his eyesight was now really bad who saw something wrong and referred him to hospital. There he got diagnosed with cancer autoimmune retinapathy and had scans that confirmed our worst fears: Cancer.

My brother knew yet he was dismissed and ignored. My brother’s final words, on the day he died, were how soon he will be with Harry. Harry was his old dog who died last December at the age of 20.

Once again, thank you, all of you. It meant a lot to the family and his girlfriend. We have all watched the footage and cried… Never realized how wonderful gaming communities could be.