Yes, more not-great-news in Pokemon Go, and yes, it’s once again mostly about Mega Evolution. While it’s been nice that the official Pokemon Go Twitter account has been trying to engage players in positive ways more so than I can recall in the past, it does so in the face of a tidal wave of player dissatisfaction. As the game enters the second week of its Mega Evolution events promoting the feature, Niantic is once again making tone-deaf decisions, making it feel as though we all should have taken Niantic’s week off to rethink Megas and the game.

Dataminer LeekDuck put together this visual of the new Pokemon Go Mega evolution timed event (meaning after 10 p.m. local time on September 17th, 2020, you can no longer finish the quest), and for even casual players, it’s an immediate letdown. 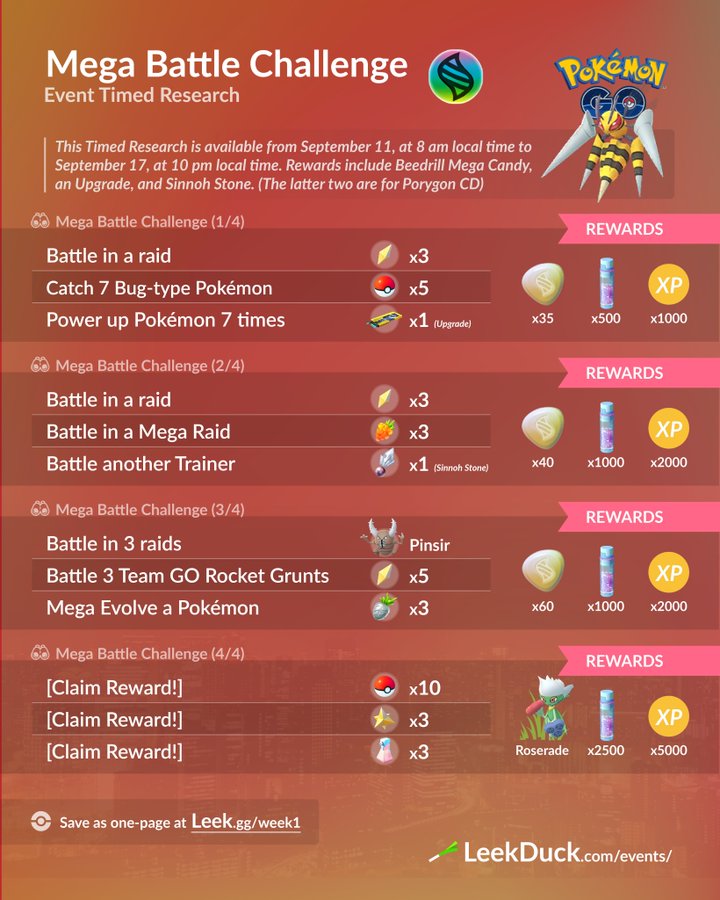 Not only are there complaints that the rewards are bad (which is true), but the questline is also fairly demanding. For example, one step in the quest asks the player to Mega Evolve a pokemon. Beedrill is the cheapest, costing 100 Mega Energy. The quest gives 130 Beedrill energy total, for a net gain of 35 energy.

However, Mega Beedrill Energy is also the hardest energy to replace at the moment as it lacks raids.  Players can get only five more through random quests – if they’re lucky enough to find them. A player could choose another Pokemon species to Mega Evolve, but those all require multiple raids during a time where some people can’t even leave the house, either due to the pandemic or raging fires or hurricanes or whatever other horror 2020 is throwing at us this week.

The game also asks players to complete six raids (five if they stack the Mega raid requirement with one of the other raid tasks). First of all, last week was the Mega Raid event, so Niantic already pushed players to do this to unlock Mega Pidgeot. This was also when it gave players three nearly free remote raid passes. If players used them for the past event, they have three new ones now, but it means they are still short two or three passes.

This is important because as noted our present situation in the US and elsewhere obviously makes it more difficult to go out and play the game. Raiding is a premium activity for many people right now. Let me illustrate how poor the rewards are for this: A single Mega Raid may net you 60 Mega Energy at least. Niantic is asking players to do three raids and spend 100 energy to gain 35 energy total, a bug that plagued 10k eggs for ages, and a common flower pokemon.

For any homebound player, it may seem more profitable to not complete the quest. It feels like spending $5 to get $1, or if you can go out and be patient, earning $1 over five days of gameplay. And I’m trying to be generous with that assessment. The only problem is that Niantic has told players to “[c]omplete the Mega-Evolution themed Timed Research story to unlock an extra treat during Halloween,” meaning anyone who (understandably) doesn’t want to use rare resources Niantic is bound to adjust in the coming days/weeks may miss out on future content (“may” because the layout of the information is a bit confusing). The whole quest feels like a test specifically designed to see how much “pain” the player is willing to tolerate.

In addition, Niantic has done something new with Mega Beedrill. Dataminers noted there’s an obfuscated field in some new code that, after further research, appears to dramatically boost Mega Evolved Beedrills during the event to have level 44 stats, no matter what level they are. This is clearly the “temporary CP boost” Niantic mentioned in the event notes, but this kind of massive upgrading is very much a first in the serious.

While it is kind of fun in that your level 15 Beedrill can reach a godly level (as the current level cap is 40), it also bloats the strength of the Pokemon that’s using a new feature. Niantic didn’t completely bring this out of nowhere, but even people like myself who keep up on these wouldn’t have expected something like this, meaning it could potentially lead players into believing that the Mega Evolution feature is more useful than it really is. It feels icky to say the least. Here’s hoping that Niantic and/or The Pokemon Company hear player complaints we’ve outlined and directly address them.

Update: There’s a list of new quests that also came out for the event. Reports and personal experience shows that these quests aren’t too uncommon, particularly for Mega Beedrill. This makes Mega Evolving as an action less problematic, but may only exacerbate concerns about the massive event buff.

9/15 Update: Niantic is releasing a third wave of free remote passes. It’s a nice gesture and hopefully is a hint at upcoming changes for the Mega system and/or Daily Passes.