You start by blowing up the world.

Literally – a button is pressed and then the entire planet explodes. But that’s OK because you’re then whisked away by some extremely fancy deer lady to a new world and tasked with rebuilding civilization!

This is the completely weird and threadbare impetus behind life in Craftopia, a game that by all accounts cribs the open world exploratory survival aspects Legend of Zelda: Breath of the Wild and makes it its own game, combining that overall feel (as well as its visual aesthetic) with some tried-and-true survival sandbox gameplay elements. 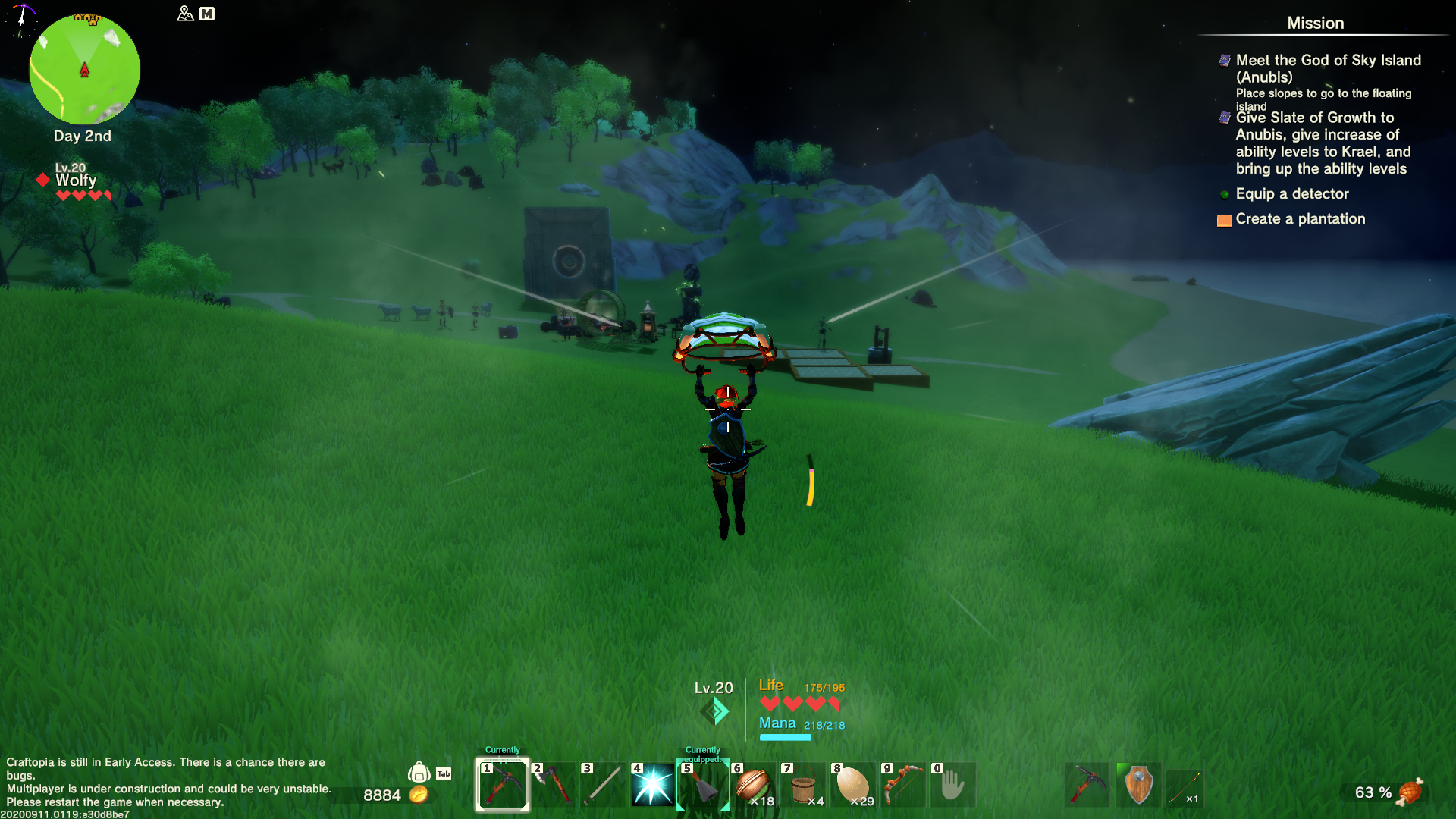 As one would expect from that description, the beats are pretty familiar; roam the island, harvest resources, build crafting stations, cobble items together into stronger items, and earn levels to spend skill points on various boons like new abilities, new spells, or passive boosts to blocking strength, mana regen, or harvesting speed. And while none of this is particularly groundbreaking, the generally relaxed vibe of the game’s world as well as the overall ease of grinding towards new materials and new heights of personal power makes this an enjoyable, if familiar, routine.

About the only point where Craftopia breaks from the contemporaries it follows is in its use of advancing time to unlock new tiers of craftables. One of the items that you can craft is an Altar of Civilization which, when fed certain numbers of materials and gold, progresses the world’s clock to a different age, thus opening up some new technologies to build. This can happen pretty quickly overall with a bit of focus, and there’s no overall pressure to even progress onward; you could stay in one age forever if you really wanted to. Though, at this point in the game’s build, there is something of a soft cap for advancement, as reaching the Age of War is unimplemented at the time of this writing.

Moving forward in time will also require you to move to different islands as well, a somewhat arduous process that involves building an Altar of Transportation, ensuring the island you move to is of an appropriate level, paying the requisite cost of gold or materials, upending your entire infrastructure, and moving to a new island. This, too, is optional, but perhaps a bit less so as the starter island is extremely small and lacking certain required resources for certain builds. But, then again, if all you want to do is build basic copper items on your starter island, you’re welcome to it I suppose. 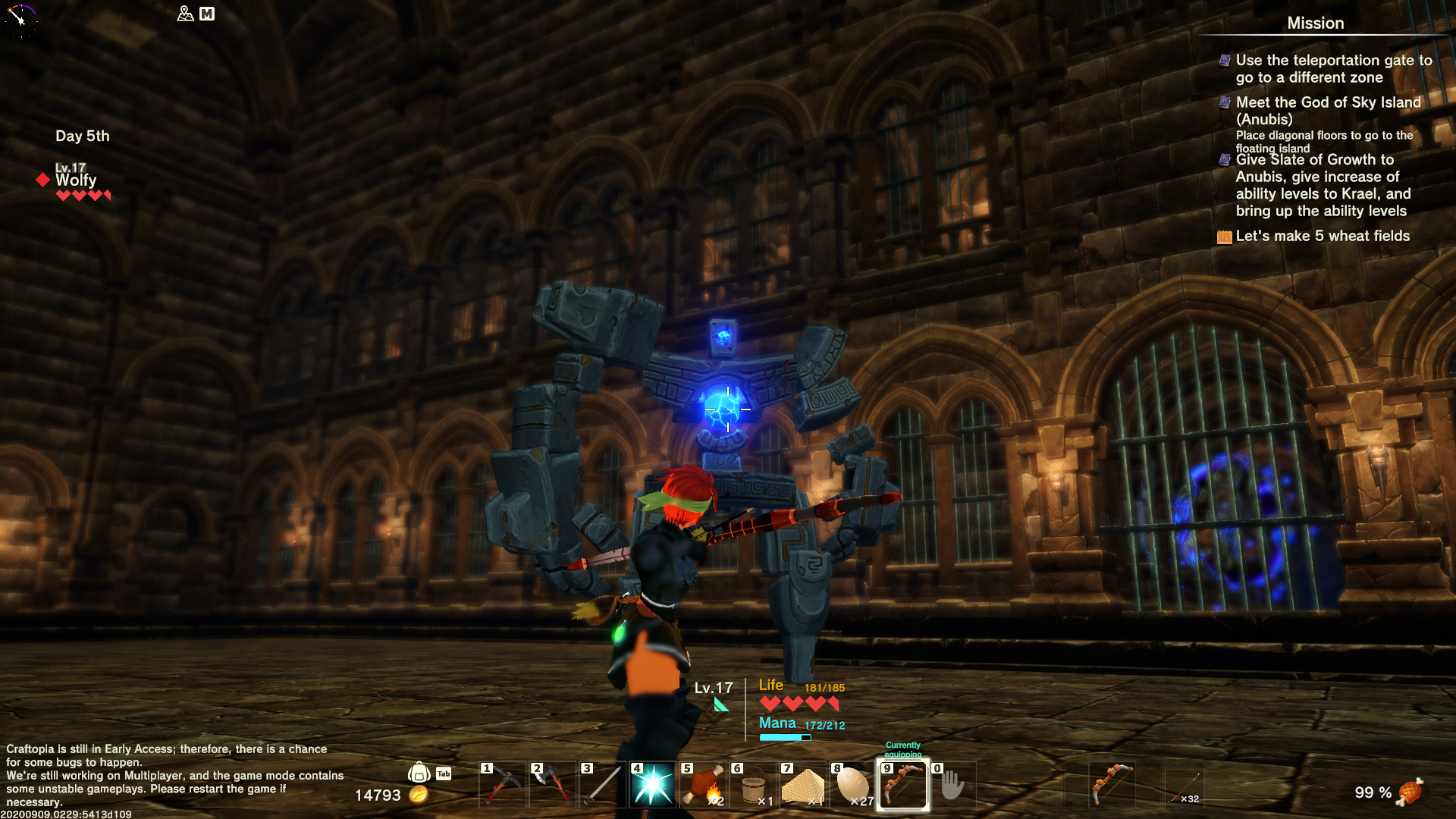 About the biggest complaint I can leverage against Craftopia is that it is spectacularly unrefined. Translations have run the gamut from amusing to utterly confusing, enemies move with the sort of random bumbling that you’d see from townspeople in your favorite 16-bit era RPGs, combat feels a bit weird and slippery, and there are a number of missing sound effects (imagine my disappointment when I finally built a motorcycle and it made no noise).

Also, there are some systems that just feel janky, especially when you enter the factory building segment of things. As of right now, operating machinery requires the capture of animals out in the wild, which requires a particular throwing item (it’s not a Pokeball; it’s a Pokediamond), which may or may not actually land even though you’ve thrown it point blank at a target. It’s spectacularly frustrating.

Furthermore, building a base – the big goal of any survival sandbox – is missing some pretty vital piece and is overall really challenging to do, with pieces that just refuse to auto-snap to where you want them. And, ultimately, it makes little difference as my one attempt at building a domicile saw sheep and bears simply spawn within, ultimately negating the whole point of building a shelter.

Then, of course, there are the amusing moments of jankiness. At one point while I was waiting for bioethanol to ferment, a sheep ran into my open campfire, got stuck, and simply burned itself to death. But hey, free meat and wool. 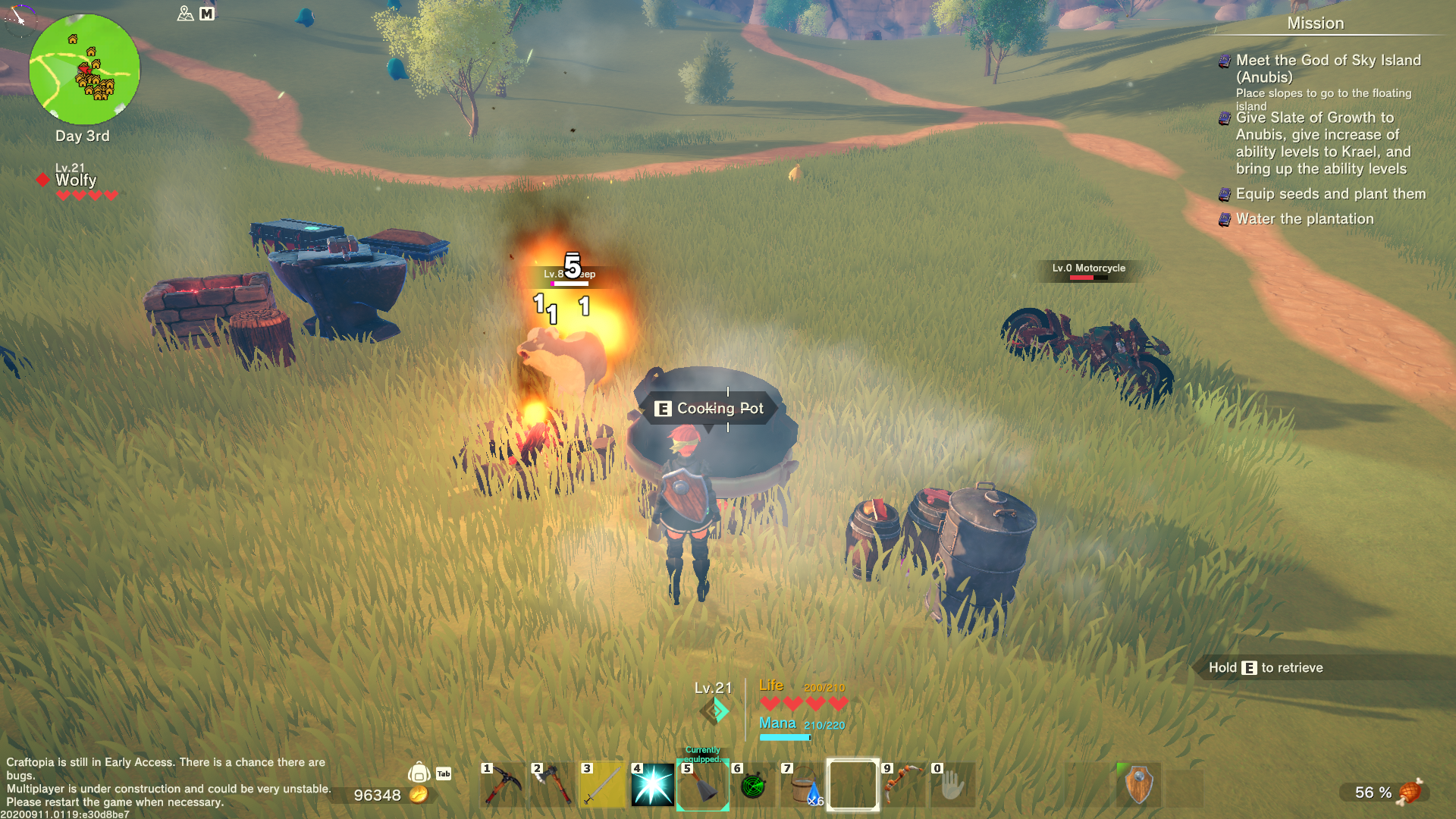 As for multiplayer – the whole point of Craftopia even being on Massively OP’s radar – it’s not exactly well-built right now. You either invite friends or join via IP, with no other way to find games to play with others at the moment. This isn’t exactly a dealbreaker, but it does require you to know other people playing the game, which might be a hurdle for some.

Even with all this weirdness, I found myself losing hours to Craftopia and its more laid-back form of survival sandbox gameplay. It’s generally low-stakes and colorful, which will either be enticing or boring depending on one’s proclivities. That said, I would still perhaps wait for more time before buying in, as there is a whole lot of fine-tuning, polishing, and shoring up of existing systems that needs to be done. Luckily, the developers have been busy updating the game with bug fixes and adjustments practically every day of the week to this point. 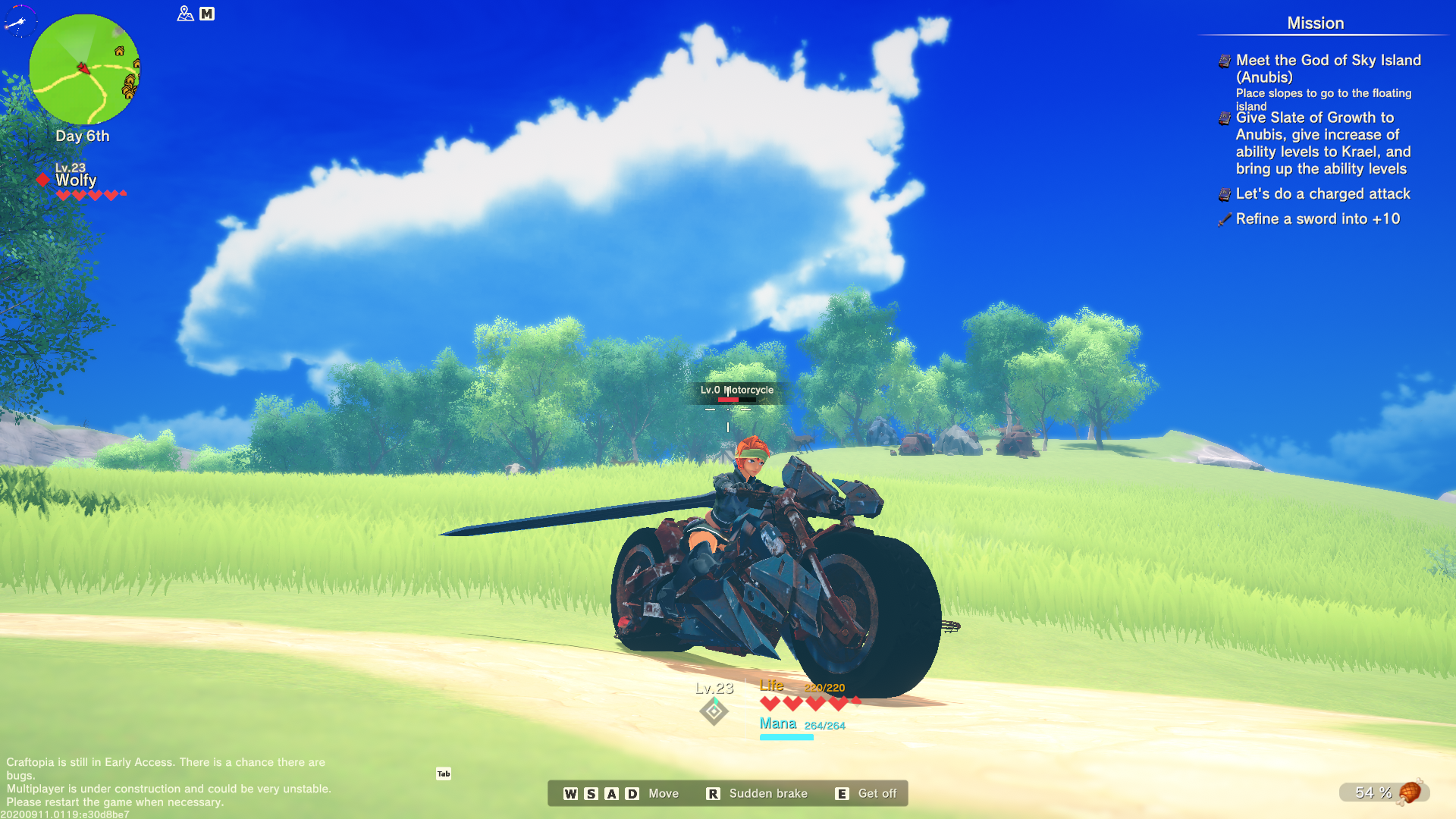 Even though its flaws are a bit too insurmountable for some, I genuinely do think that Craftopia, given time, will transform into something special, especially for those who are looking for a more calm experience.

Of course, the classic sheep jumping into the fire. Was amusing on the first dozen times.

It is a great skeleton of a game actually, and I’m impressed they made so many different things work together so well. They just need to keep refining those things, and the current rate of patch releases shows that they’re doing a great job on it already.

I like BOTW and when I watched the trailer for this I was curious and then at the same timeflabbergasted by the mash-up of things. I will wait for it to cook a while longer and get multiplayer up to speed and run it on my server.

I watched Splitsie and Capac (who normally do games like “Space Engineers” and “Stationeers”) play this for a bit. It was *extremely* Early Access – the only clothes they managed to craft were wildly oversized hats, moving from one island to another tanked Splitsie’s framerate into the single digit range, and dear gods I hope that the sounds for animals were not final. The bears and deer stand out as especially awful – defeating a deer triggered a five second sample of either a high pitched deflating balloon or a squeaky screen door swing slowly open.

It might get better eventually, but personally I’ll stick with Space Engineers, Ark and Minecraft for my “hit things to get stuff to build things” gaming needs. OnO

I really hope they expand and improve the multiplayer so people can run servers you can join with randoms (ideally much more than a single group but enough to feel like a small community of people occupying the worlds). I feel like I’d get bored and lonely playing a game like this by myself but with other people around (or to play with) it would feel much more alive and would give my character a purpose and reason to progress.

Its times like this when I realize that articles like this could really benefit from having an additional video review.

That way you could actually be showing the things being talked about in game, all at the same time.

Looks interesting, with a lot of time, effort, and polish, it might even be good. But, I’ll play the wait and see game.

Sadly, I got bored just reading the description of game play. And, the graphics don’t make it for me either.

Looks interesting based on what I’ve seen. I plan to keep an eye on it as they polish it and maybe pull the trigger once they clean it up some.