Utakata’s shot of a “quiet earth” in Blade and Soul here is not from the starting area (I’m assuming!), but it definitely makes me think of all of the MMOs that seem to think that the only way to start your character out on a journey is to shipwreck them and give them a good amnesic bonk on the noggin.

I always feel that this is the worst possible place to begin a career as an adventurer. Maybe a career as a hospital patient with PTSD or as someone who realizes that he’s been given a free beach vacation and should make the best of it. 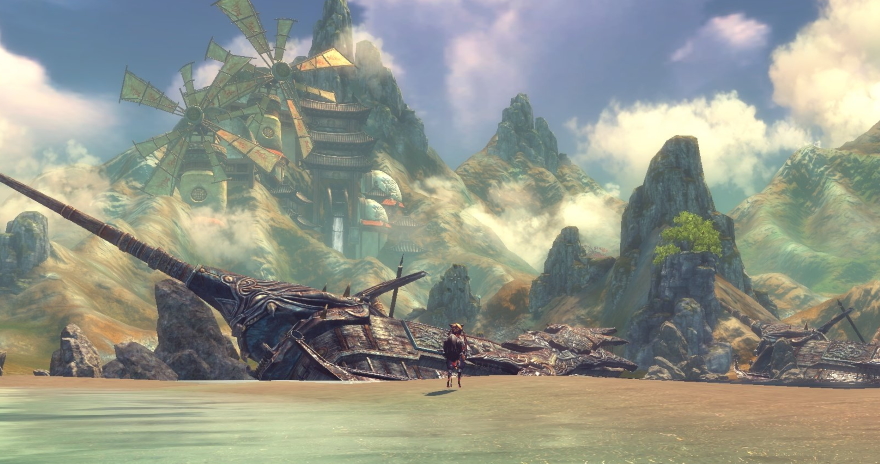 Katriana is totally creeping on Elves in Lord of the Rings Online: “This is yet another shot of Duilond at night. The beauty of the elven towns of Ered Luin at night always makes me want to screenshot them.” 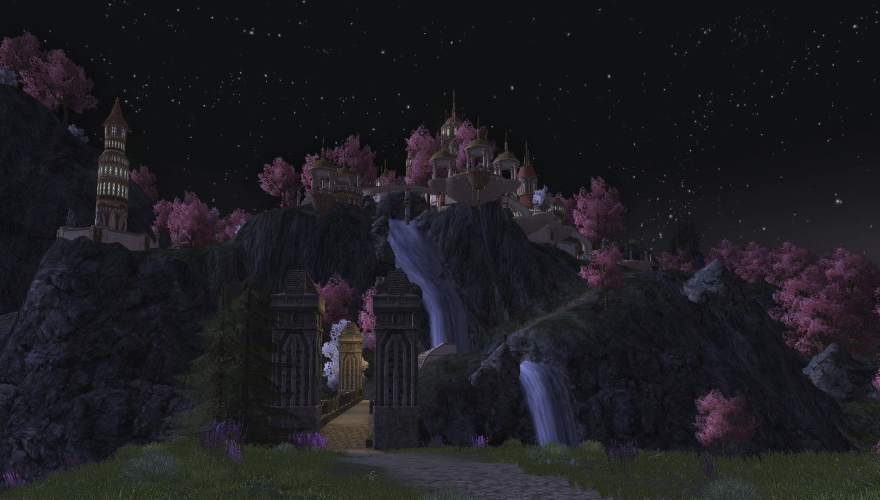 Miol absolutely smothered us in gorgeous Guild Wars 2 pictures last week, but I found this one pretty striking for displaying a distaster in motion.

“Zommoros’ invitation for a private tour of the Mystic Forge is a tourist trap! Well, that’s the life of a tourist!” 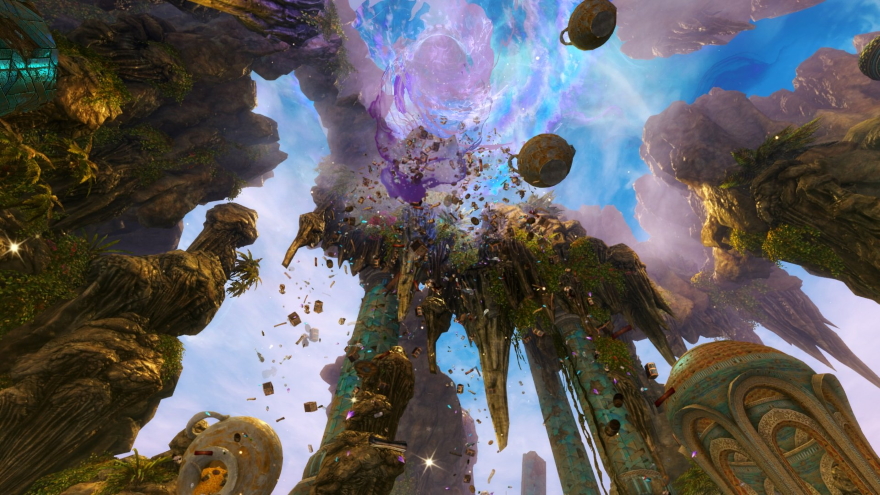 JonBuck is walking on the other side of the gender fence in Final Fantasy XIV and finding it interesting: “Playing a male character is actually a novelty right now. Found a good look for him.” 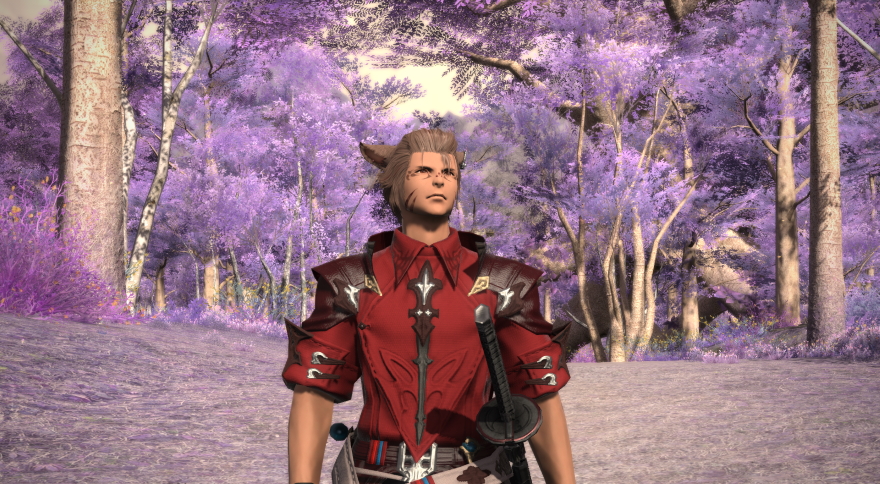 “Here’s a shot from Star Trek Online,” said Stormwaltz. “It’s Governor Hannah Welch’s current flagship, the Buran-class U.S.S. Arica, in orbit over South Asia. I don’t know how often people fly around to the the far side of Earth from Spacedock. I remember the dark side being… well… darker. Also, North Korea used to be devoid of city lights, which struck me as an odd intrusion of modern geopolitics on the future-fiction. It has the same lights as anywhere else now.” 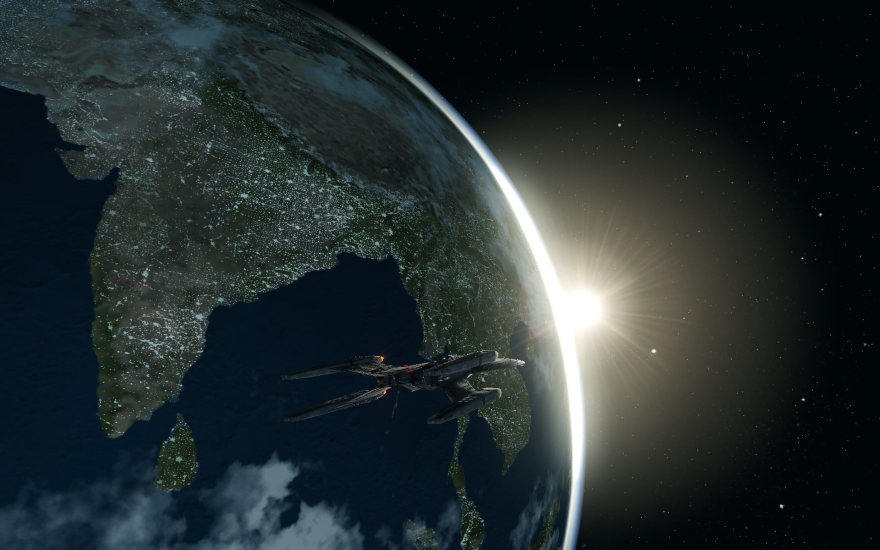 All Conan Exiles, All Day, Everyday

PS: Thanks for the OP screen plug, Mr. Justin. (and last weeks too, I might belatedly add.) /bows

Also note: That if any readers have questions about my contributions, feel free to ask away in the commentary. As I don’t give a lot of reference to go on. And that’s fairly deliberate, as I want the screens I present speak for themselves.

You can likely see, most of my contributions come from Blade & Soul right now. As they are in my pigtailed opinion, most captivating. There will likely be more added from World of Warcraft whenever Shadowlands proper drop…

…and as long I’m not in an area where my characters get their faces eaten off as soon as I am trying to get my National Geographical moment. That would be bad. And bloody. And repair bill expensive! >.<

Finally, as it maybe noted, a lot of my brief captions have pop culture reference, apparent, obscure or otherwise…that may or or may not reflect what is actually going on with my screens. But seem appropriate anyhows. Thusly, this was respective to my as for mentioned OP screen featured for this fine column:

Brewfest is here and with it the start of my favorite time in WoW, the music alone make me happy no matter how many time i listen to it, the fest provide the socializing i like most in games, people having fun being silly.

For a while now in No Man’s Sky, if you feed treats to friendly animals on alien worlds, there’s a chance they will like you well enough for a while to let you ride them as mounts.

You think that sounds strange? Check out the pics below! :-)

I’ve also managed to see a couple of the new planet-types in No Man’s Sky — swamp worlds, and volcanic worlds.

Do you think I’m standing far enough away from that volcano, or should I back up some more? :-)

Meanwhile, over in Neverwinter Online: don’t you just hate it when evil sorcerers mess with gravity itself? My rogue character (right) and my wizard NPC companion (left) certainly aren’t enjoying it here.

I have to try NMS, but maybe later this year, right now too i have too many games, but i didn’t play NMS more than few hours when it was launched, looks beautiful in your screens.

Well, I certainly didn’t expect a feature! Thanks Justin. Here’s another shot of him in the Heavy Metal tanking gear. Not really a story here. I have two characters maxed out. I started this one to go through ARR again and my employment situation makes me think I’ll have a third (unfortunately).

I’ll toss out a couple as well! A little summation of my week in FFXIV:
1. Emmet-Selch. Definitely one of my favorite antagonists!
2. Standing on a cliff overlooking a foggy sea in Kholusia.
3. Attending a RP theater show. (I didn’t realize how dark it was until I posted, sorry!)

A Cult of Cows – This is an RP guild I joined in classic a few weeks ago. Good people. This is part of the Sunday night gathering of members, where guild business is dispersed, rank ups, etc.

A lovely druid just jamming in Dalaran. I’m not generally a tree hugger, although I do think environmental issues should be addressed, but this particular dancing tree is none other than my sweet wife in real life.

Whether it be storming castles…beating back the void…finding serenity in the least likely places…exploring the wild…or (ahem) relaxing in a hot tub…the life of an adventurer is a wild ride.