Hey, remember how Blizzard is still work on Diablo IV? Yeah, one or two other major things in 2020 may have made that slip from your mind. But today the studio released another quarterly update on the game’s development. Lead Systems Designer David Kim says the studio has been busy tweaking ancestral, demonic, and angelic power, adjusting the sorceress enchantment system, improving the “ratio of effort” for rewards, and shifting character dependence on items as the game works through development. Most notably, the skill system has received a massive overhaul, as seen in the massive skill tree.

“We have made some major changes to Diablo IV’s Skills and Talent systems. We’ve been reading through a lot of the comments from the community and agree that the Talent system needs more depth. Similarly, Skill system progression felt too simple, which created issues where a player would have no meaningful reason to spend their skill points. With this valuable feedback in mind, we’ve have been iterating on a new Skill System. The upper Skills section is where you will spend the Skill Points that you earn by leveling up. Here, you unlock brand new skills, unlock additional functionality for these skills, and unlock Passive Points that you can then spend on the lower Passive section of the tree. The Skill Tree you see above consists of many specific nodes, a sample of which you can see in the screenshots above. If we imagine every single node on that massive Skill Tree affecting different skills in different ways, the path that you decide to take will determine big power increases and playstyle choices.”

Players won’t be able to grab every skill tree node – probably more like a third of them, with the goal that “players can have very distinct, and different ways they build out their character.” Blizzard is also working on the endgame character progression system and promises more info next time. 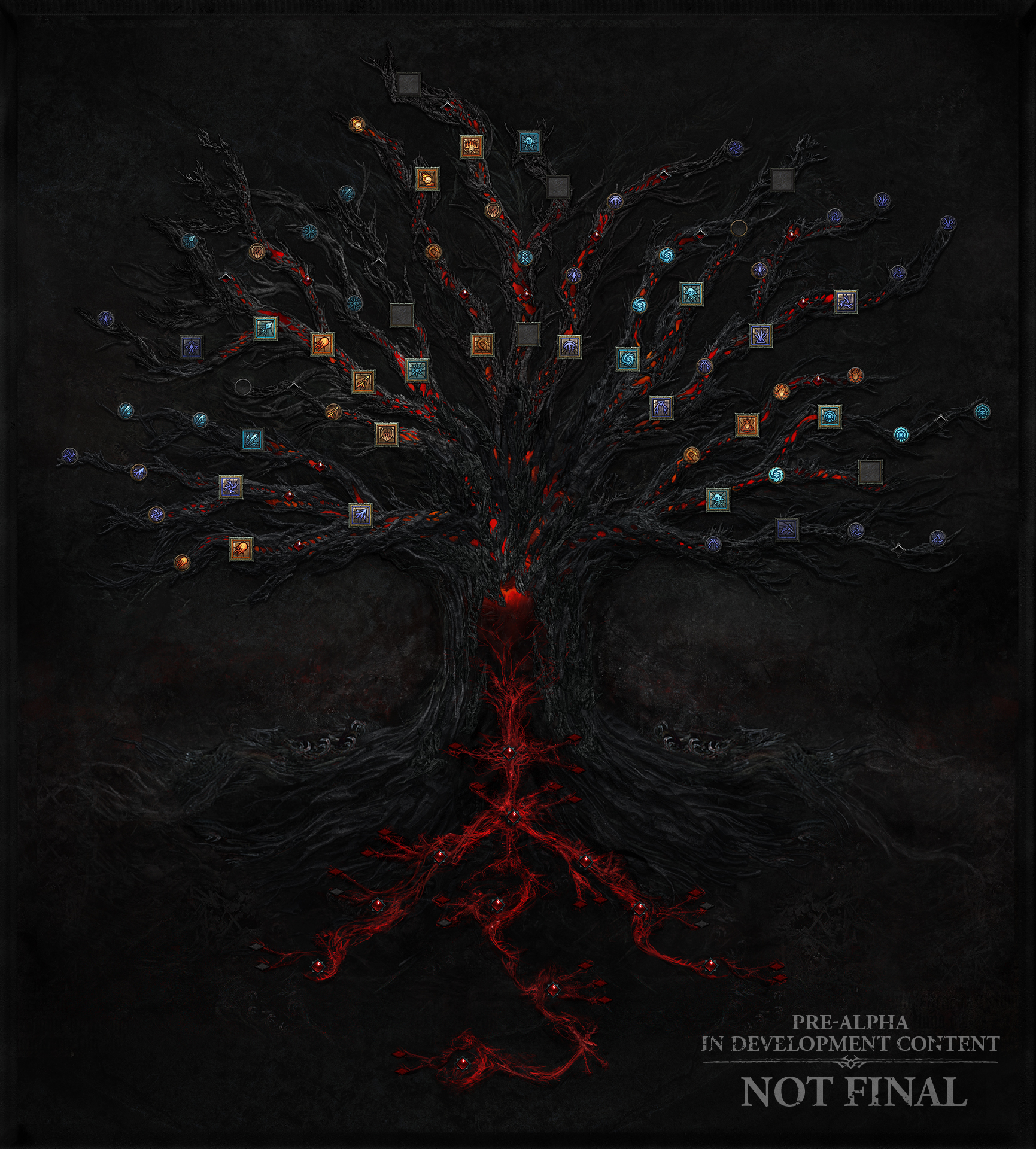 Looks like PoE spiderweb skill tree which I hated

Why is Blizzard bothering with the idea of giving players a choice in skills? Why are they dangling the idea of custom builds for semi-unique, personal play styles? They’ll just patch out any semblance of player choice and force cookie-cutter builds down our throats down the line, anyway…

Still looks too simple. If you look closely there is only a couple passive buffs to each skill and it’s all linear. It looks like you choose what skills you want and then spend points to buff them. Not very interesting at all.

Whatever happened to Diablo Immortal? Or is that Diablo IV? Did they change it to PC?

You’ll have to ask NetEase about the status of the phone game.

There were some rumors from insiders that they are done and only waiting for Blizzard to give green light for launch. That was at least 8-10 months ago though.

I wonder if Diablo IV will require any sort of player skill? III certainly didn’t, one of the shallowest games I’ve ever played!

Seems like you didn’t play Diablo III properly then :) It’s one of these games, easy to learn, hard to master. Certainly there is plenty of challenge in the game, but you have to reach it first :)

More like… easy to learn, RNG to master. Skill will only get you so far untill you’re blessed with the right drops.

Well, that’s the thing about these kind of things. It’s about the right drops. Please, I still remember tons of all-nighters I did in Diablo 2 back in the day in gaming cafes and at home grinding for loot.

THere is always challenge if you want to do it. The problem is not that, but that it gets boring pretty quickly. Going up on the ladders while doing greater rifts can hold my attention only this much. I hope end game is more interesting in Diablo 4.

Highest I reached was paragon 350ish, and those rift things up to level 55ish. Nothing ever changed. The gameplay when you first hit 70 is identical to the gameplay at paragon 350, the only thing that changed was the loot. The gear drives the meta game, but the set bonuses are so damn overpowered that there was nothing to work out, it was all so obvious. In fact, a lot of those set bonuses actually made a lot of your skills worthless, reducing the depth even further as you only needed to use a couple of skills at any given time.

but you have to reach it first :)

I think people prefer to look for challenge in PoE.

Believe it or not, there are Diablo fans that don’t want care to deal with a passive skill tree like in Path of Exile.

I’m hoping for a happy place in between Diablo 3’s accessibility and PoE’s customization.