So, you’re first of all likely all wondering what happened to the voted-for Fallout 76 that was supposed to be part of this column. I ran into some technical issues, I’m afraid: I was able to get the game as part of my Game Pass subscription and assumed that I could just play the thing on my secondary drive like most other games I own. Unfortunately, this game didn’t like that, and the only workaround was to install the game on my boot drive. They wanted me to cram 84 gigs of game on to a drive that, even if it’s cleared, only has a max capacity of 150 gigs. (Yes, it’s a small drive, I know. I’ve only got so much I can spend on hardware, I’m afraid.)

So in the interest of having something to do, I elected to take up the runner-up choice for this week: Spellbreak. And, much like Apex Legends the last time I did a Not-So-Massively mix, I was reminded that traditional battle royale is a young person’s game. 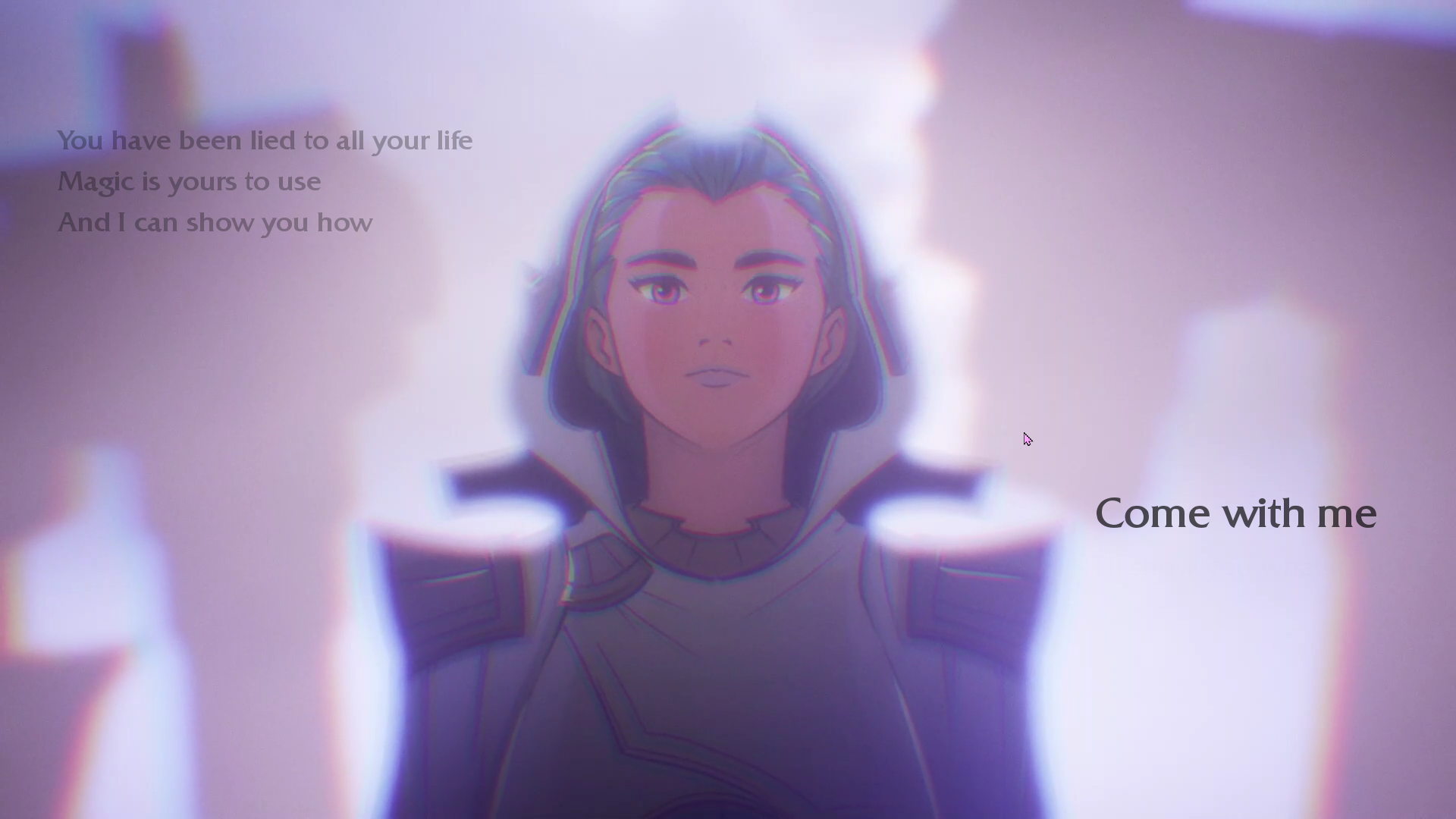 It started reasonably enough, with a tutorial segment that got me acclimated to the mechanics and controls while also sprinkling in a bit of lore. Something about being a Vowbreaker and that I would need to defend myself from Vowkeepers. But if that’s the way everyone is introduced to the game, then doesn’t that mean we’re fighting ourselves and not this purportedly nefarious enemy force? Are other players supposed to be Vowkeepers? Are the Vowkeepers the one causing the ring to close? So many questions that I don’t think the writers thought to ask.

Threadbare as the rationale for why mages are fighting in a last person standing contest may be, the game of Spellbreak itself is certainly competent enough. The typical battle royale beats are all there, with loot to find and all of the wanted tension of keeping your head on a swivel.

The big wrinkle, of course, is the use of spell-slinging gauntlets, with each one set to a specific element; you start out with one that you choose and can find a second gauntlet to equip as a secondary spell attack. I often leaned towards the lightning gauntlet as my primary with the earth gauntlet as a secondary, with the earth gauntlet doing a good job of softening my target and the lightning gauntlet working as a rapid-fire assault rifle of sorts. Additionally, each gauntlet has a Sorcery – a powerful attack that can sometimes be combined for unique effects. 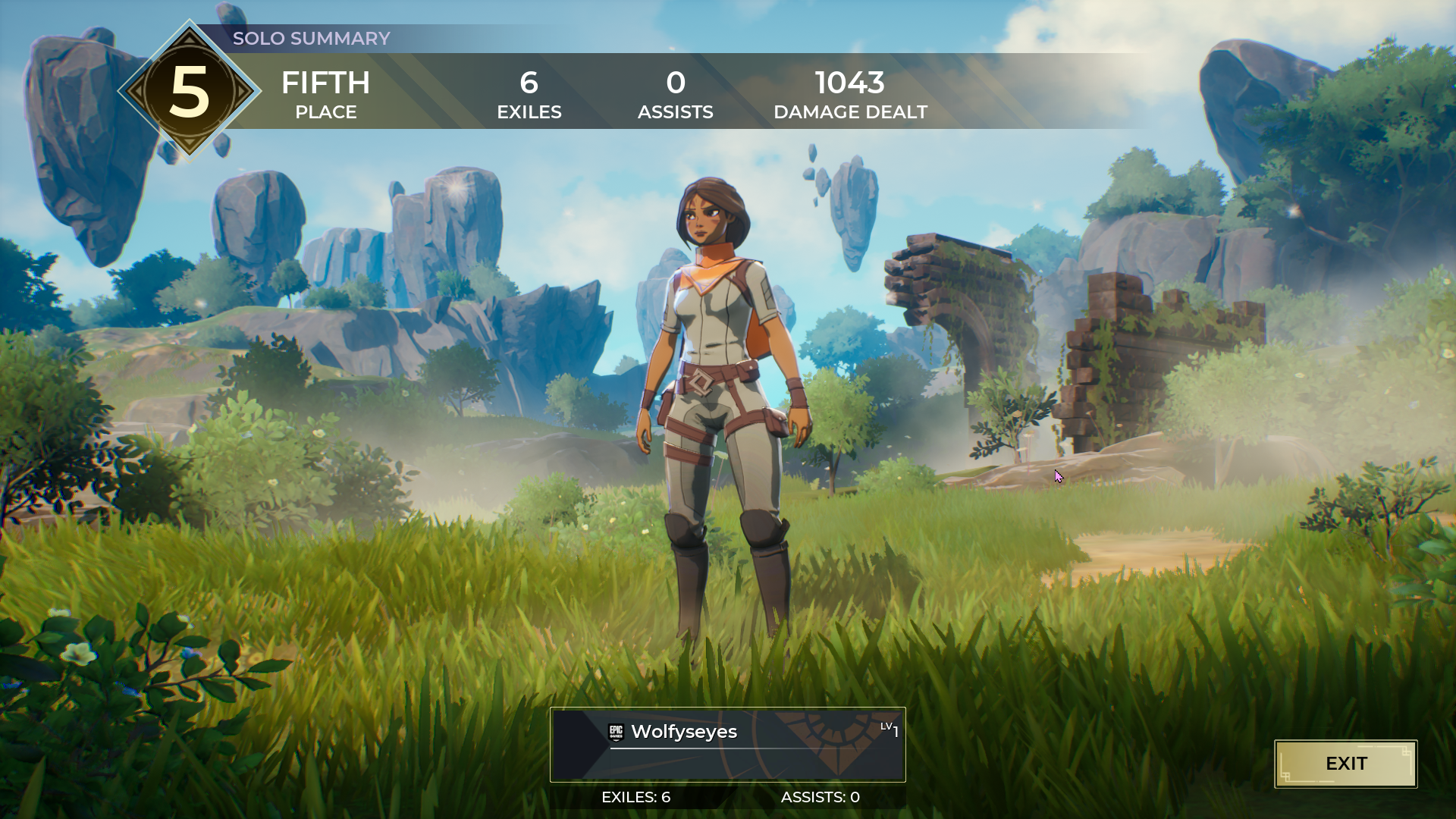 So really, the problem I have with Spellbreak isn’t so much its gameplay as it is my skill. I am not very good at these kinds of games, and continually losing to people who are perceptibly so much more skilled than I am over and over and over again is not terribly motivating to me. There’s also the fact that I just mentally fall apart in PvP, losing all sense of spatial awareness and aiming skill. About the best I did was take out five others before being wiped myself, and that was the only shining moment in an otherwise endless series of kill-less attempts.

I even brought my husband along as backup, which made things more tolerable in that we were not taking this all very seriously. Goofing off with one another in voice chat was the highlight, but honestly I could goof off with him in-person without also being used as a punching dummy for other people.

For anyone who adores battle royale, I suppose there is plenty to find enjoyable here, and there appears to be a whole lot of people playing as matches populated within seconds of readying up and entering the waiting area. MOP’s Sam loves the game, for example. I’m just not one of those people, I suppose. My Tribes 2 and Unreal Tournament 2K4 days are well and truly behind me. 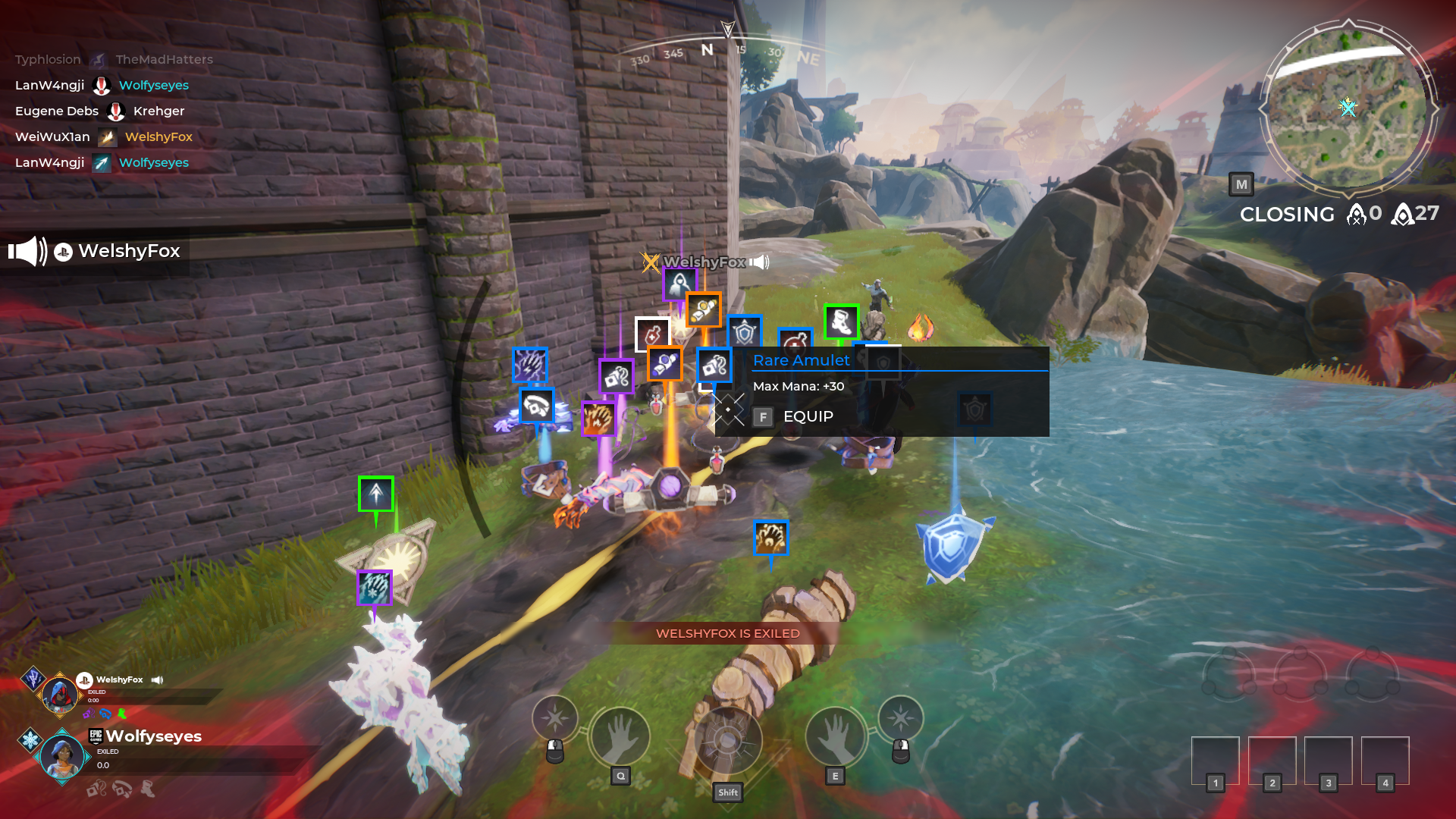 So, with that confirmed, it’s time for us to move forward in the Not-So-Massively lineup. In this poll, I’ve eliminated the lowest-scoring choice (you all really don’t want to read about me playing Rocket League, it seems) and replacing it with another new option, but otherwise the choices are the same as last time.

What game from the list should we tackle next?

Now circling back around to the matter of Fallout 76: I would like to revisit this again once I’ve gotten a larger boot drive, and even devote an entire month to it, but that is ultimately up to you guys. I’m still going to see about replacing the drive regardless of the poll results, but I’d like to know what you all think:

Should Fallout 76 get its own month? 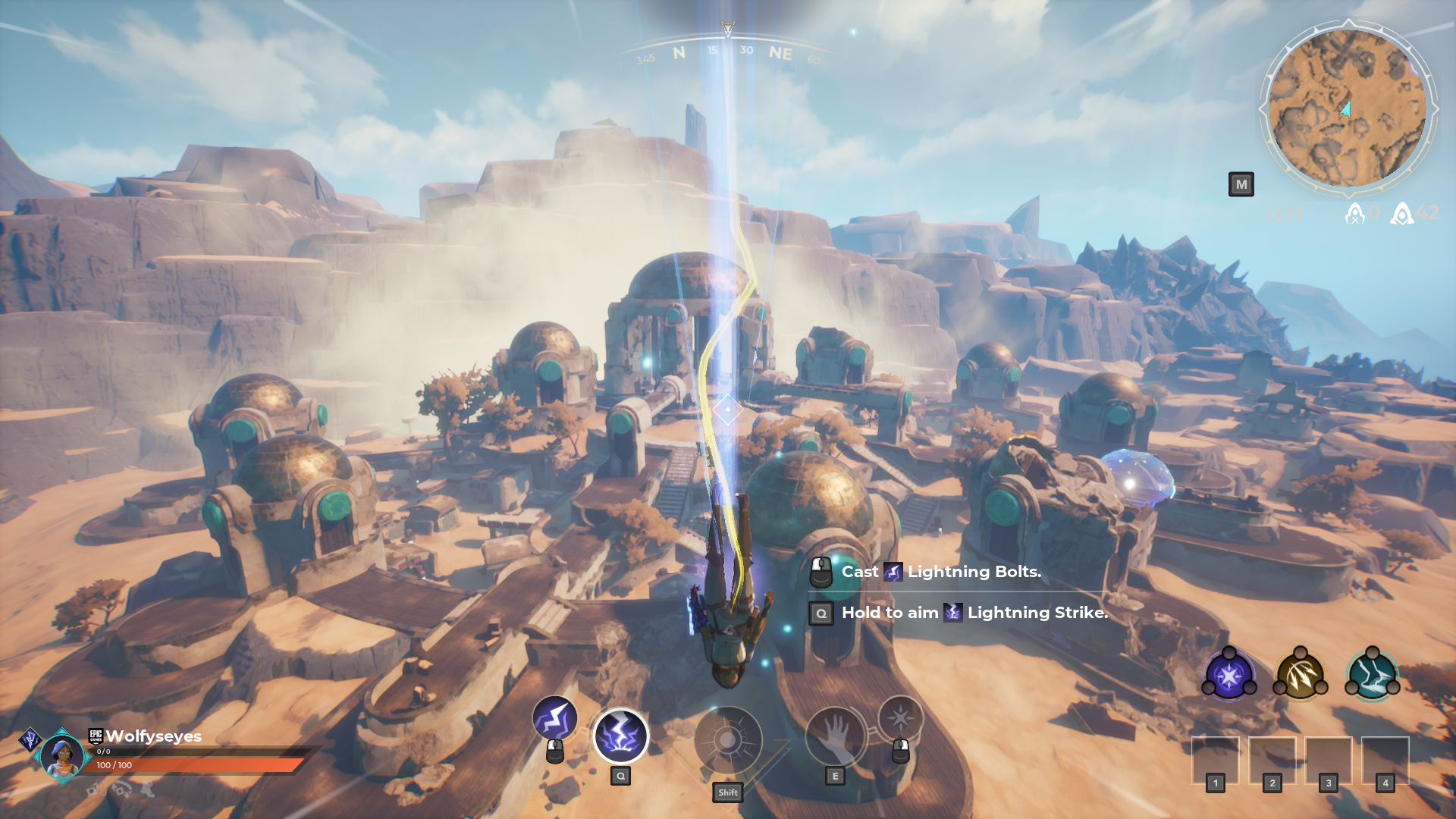 As usual, polling will wrap up this coming Friday, October 9th, at 1:00 p.m. EDT. In the meantime, I’m going to go sit in a corner and feel old.

For all the reasons above, I have never played a BR. Know your limitations.

I want to hang this on my wall lol

Seriously, for under $100 you can get a 500g SSD. And, they usually come with free software to ghost your boot drive to the new drive. That is exactly what I did and it has worked flawlessly. Took under an hour to do the whole job. WD, Samsung, Crucial, all make super drives.

That’s only about five triple A games in today’s install environment. My Steam folder alone is over 1TB, that’s not including Origin and Epic Games, or any stand alone titles like WoW.

Much cheaper to get a 3TB hard drive as a C drive, and if you have an SSD just install a select few games on it.

Well, I am assuming that he nukes the games he is no longer using, and I was responding to his issue of cost vs. ability to even play. But, yes, a multi-TB hard drive would be just as easy to install and also innexpensive.

That being said, I also have a main gaming SSD that I only install drive performance limited games upon. All the rest go on my main SSD drive. :)

But, maybe the whole discussion is mute as he might have only a laptop. :(

Weird. I’ve had FO76 installed on secondary drives since launch without issue. As much as I enjoy stomping through the wastes with my wife, the bugs in this game really make me wonder…

Are you playing it via GamePass via the MS Store? I think that makes a big difference in the way stuff installs, such as all the issues had during the abysmal PSO2 launch.

For some reason, this particular bugbear is unique to the Win 10/Game Pass edition. Lucky me. :/

Any chance you tried the fix posted to Reddit?

You can find it here: r/fo76/comments/hq3r2w/automated_fix_for_fallout_76_noregionping_on_xbox/

First I’d heard of it! Thanks for the link, I’ll be sure to give it a shot.

Sure thing. Best of luck!