The season of Extra Life is almost upon us, meaning all your favorite MMO studios are going to be dispatching their developers to play all the things for the long-running gaming charity.

“Since its inception in 2008, Extra Life has raised over $70 million USD for sick and injured kids. Right now, children’s hospitals need YOUR support. Be a hero. Sign up today and raise funds for the Children’s Hospitals COVID – 19 Impact Fund.”

This year, the festivities begin on November 7th. Here are a couple of the studios you could help with the cause this year:

Standing Stone Games (Lord of the Rings Online and Dungeons and Dragons Online) will be aiming to raise $20,000 for the Boston Children’s Hospital, donating $5000 to seed that fund. SSG has some pretty nice rewards for folks who donate, including titles, minipets, and point codes.

Most of the Daybreak sub-studio crew (EverQuest/EverQuest II, DC Universe Online, PlanetSide 2) are turning out for the cause too, with the EverQuest teams angling to raise $10,000 and the PS2 and DCUO teams hoping for $20,000 apiece. Funds will go to Dell Children’s Ascension in Austin and Rady Children’s Hospital, the Children’s Miracle Network Hospital in San Diego.

Finally, KingsIsle (Wizard101, Pirate101) are likewise hopping in to raise $10,000 for the Austin Dell Children’s Medical Center of Central Texas, with prizes on deck to include mounts and crowns and more. 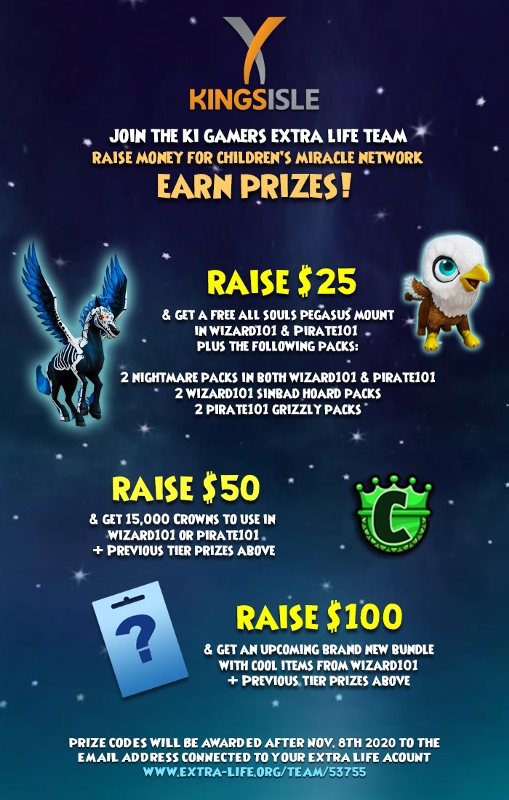