Well, I was hoping for this to be more fun than it actually was. I adore the heck out of X-Wing vs. TIE Fighter, it should be pretty evident that I absolutely am in love with space flight sims and sim-lites, and I most certainly like playing multiplayer and MMOs with friends. So it certainly felt like I was stacking the deck in my favor as I headed in to Star Wars Squadrons for some multiplayer.

Unfortunately, all of my pre-prep was dashed upon the jagged rocks of other people’s behavior. 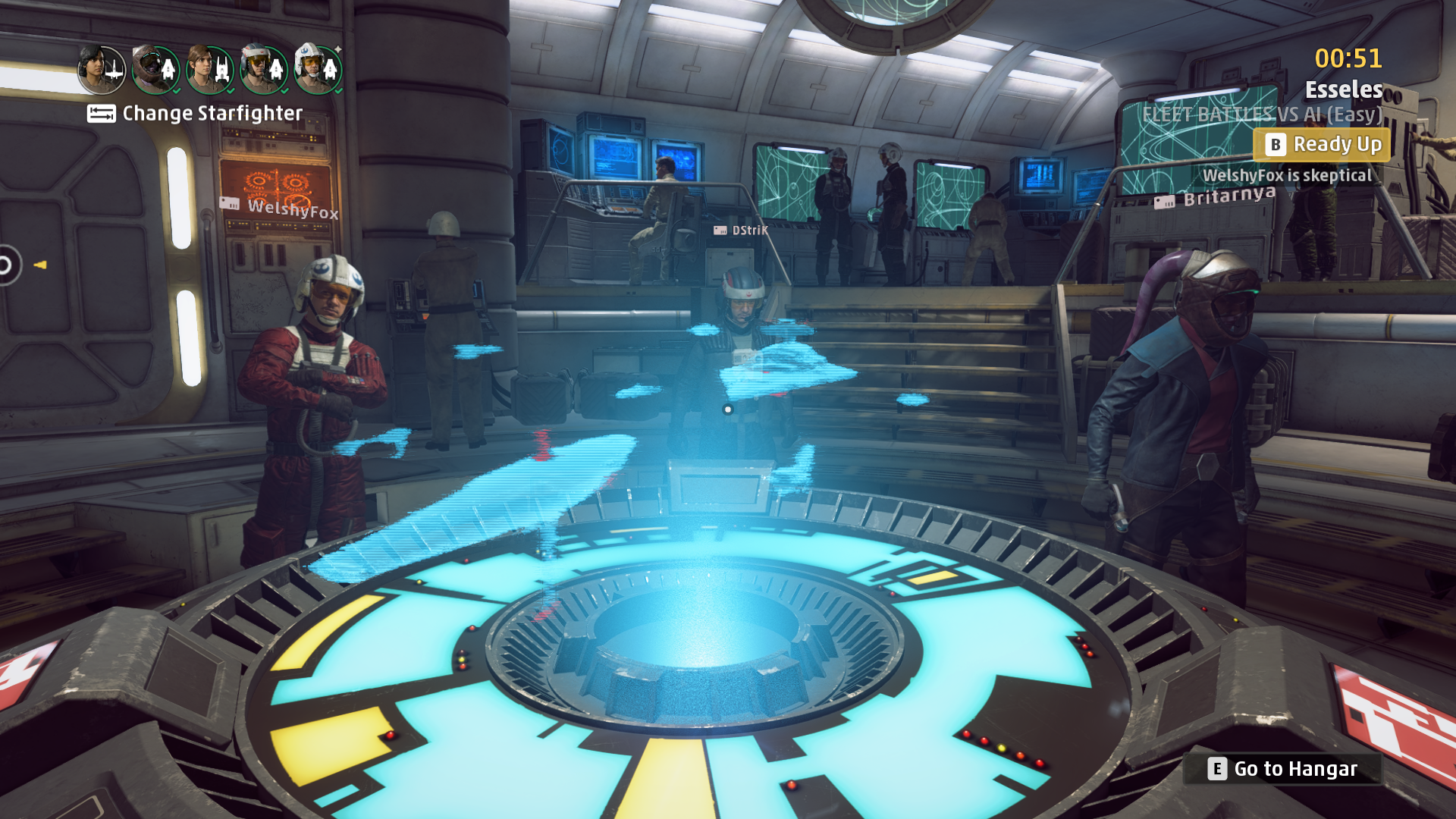 Starting off the multiplayer life in this game does come with a couple of caveats. For one, if you want to enter Fleet Battles, a tug-of-war-styled multiplayer mode, you have to first complete a guided tutorial and then finish some battles against AI enemies until you’re at least multiplayer rank 5. This is certainly understandable, but I really can’t in good conscience recommend this mode, especially in one particular map (it’s literally just a skybox). I just found it to be markedly boring and uninspired, like a MOBA without any of the laning or strategy but with internet spaceships. And while I love me some internet spaceships, I really dislike MOBAs.

Mercifully, my husband and a very good friend of mine both also hate Fleet Battles mode as well, so we really didn’t spend too much time in here; a couple of matches complete — one ending in victory and another ending in defeat — and we moved on to everyone’s preferred multiplayer mode, deathmatch.

This one is even more straightforward than the watered down space MOBA of Fleet Battles, but then, if you’re looking to hop into a cockpit and shoot other player spacecraft, you really don’t want anything more. This basically meant the mode’s far more interesting maps and Squadrons’ excellent gameplay could really shine through to the fullest. And let me tell you, this game does feel extremely good to play. 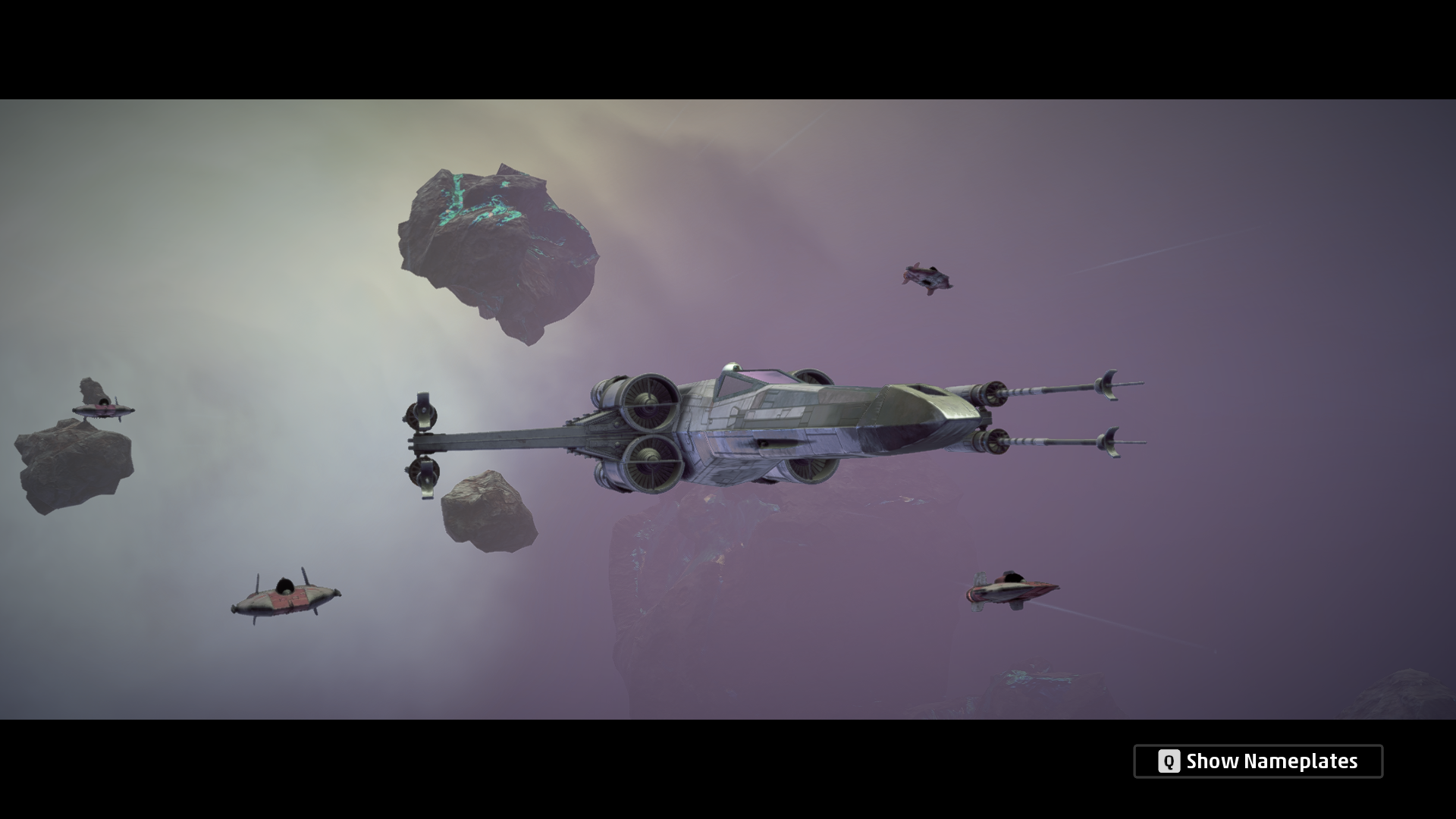 Up to this point, I’ve been playing Squadrons’ single-player campaign up to the very near end, and while the story itself ultimately got pretty boring, the sense of flight in the game and its balance between simulation micromanagement and simple flying joy is sublime. There are auxillary systems to manage (weapons, enginges, and if you’re in most Rebel craft, shields) and proper banking and throttle response is pretty important. The whole experience really feels great.

As for the variety of ships, there are only a couple that I truly liked, but there are a number of customizations that can be applied to engines, auxillary weapons, primary weapons, shields, and hull in order to tailor a favored ship to your playstyle. Thsi was especially handy in multiplayer, and even moreso in deathmatch, particularly since the base weapons are fixed and don’t have any sort of lead reticle; there is a type of weapon in a couple of ships that operates like gimballed guns in other space flight titles, which feels kind of cheap, but still requires some modicum of control to keep a target in sights and the gimbaling to operate properly. 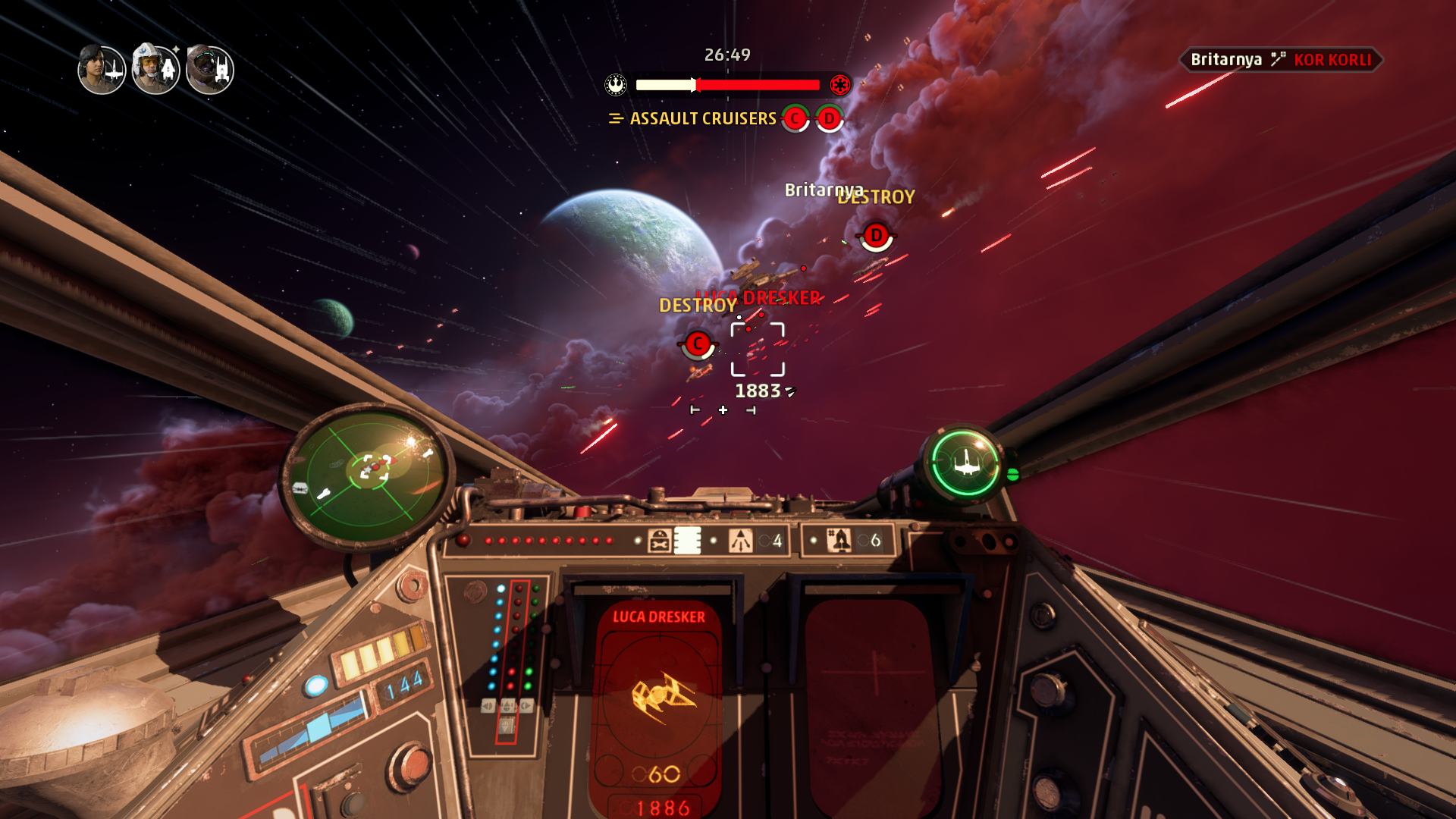 So, what’s the problem, then? Like I said, other players. Particularly the act of what I started referring to as “turreting”: Players would often arrive to a blind spot or lie in wait, shut their engines off entirely, and then just simply steer themselves at us and open fire with impunity. Speeding away would only sometimes work against this tactic, and more often than not in the case of my own experience, I couldn’t come to a stop and come about fast enough to retaliate.

I appreciate that this is a tactic (emergent gameplay, am I right?) and that the game doesn’t particularly halt people or discourage people from doing this, but it also feels extremely cheap to me. These games are about flight and maneuvering and deft control, not the internet spaceship equivalent of camping. It was like we were fighting an entire team of Bastions. And what’s infuriating most of all is that the move works; at one point, nearly everyone on an opposing team were turreting and we were beaten soundly by a score of double digits.

After several matches’ worth of this behavior, I called it a wrap and ruefully uninstalled Squadrons from my system. Which is an absolute shame because I really would love a cross-platform internet spaceship game to play with my husband and my friends, but we’re not allowed to unless it’s a competitive multiplayer shooter. A shooter which happens to be absolutely rife with camping snipers. 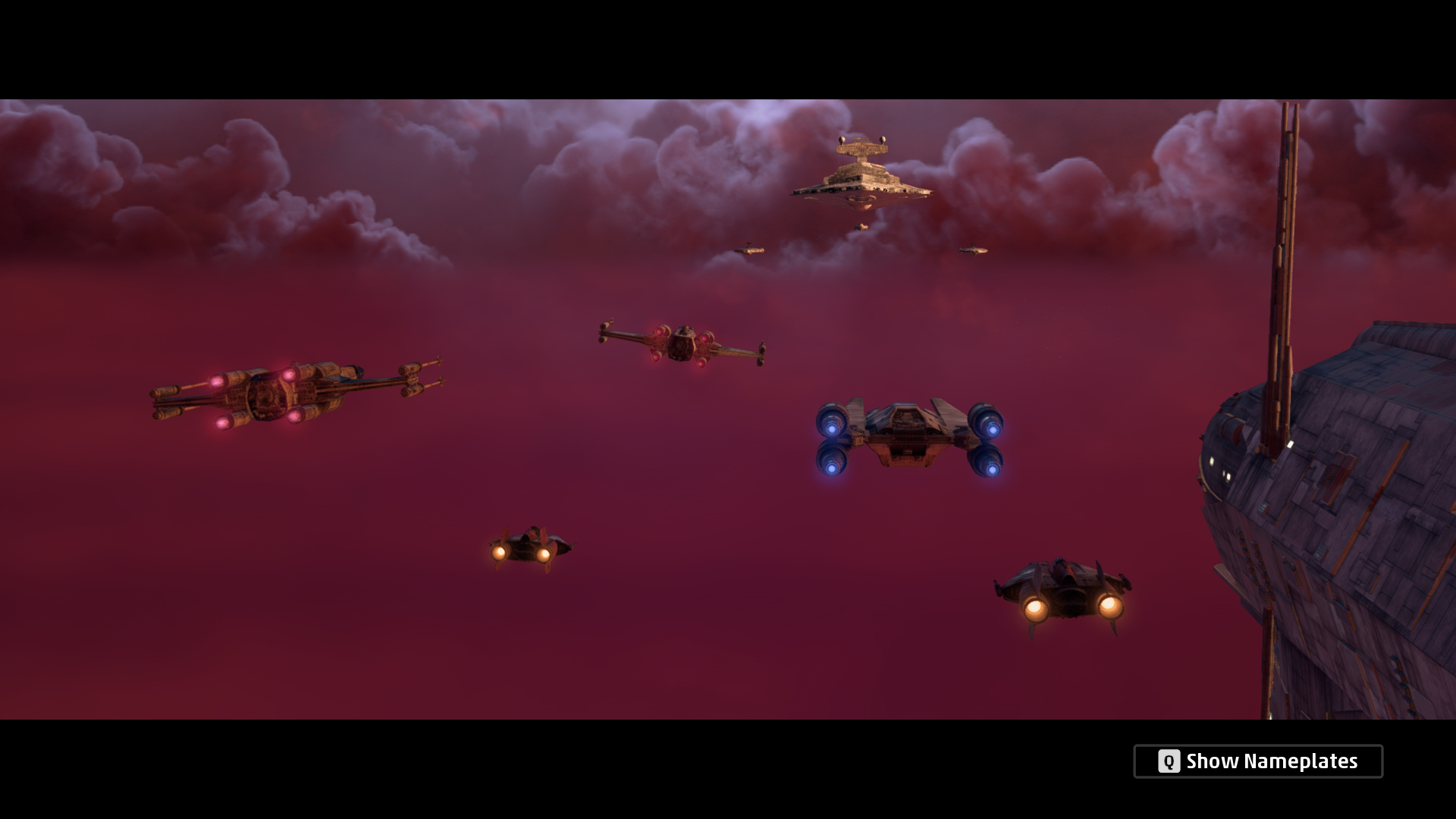 I’d much rather end this entire series on a high note, so there’s one final week of Not-So-Massively titles to go for. So, we’re opening up the polls for one last batch of multiplayer titles. So, let’s see if we can’t finish strong, shall we? Here’s the last round of picks.

Finally, we’ll be looking to the next month’s game, and since I’ve just had an absolute hungerin’ for a space-based MMO, I’m going with that as the central focus for November. Here are the choices I’m considering there.

Which space-based MMO should we try next? Choose My Adventure (in Spaaaaaaaace)! 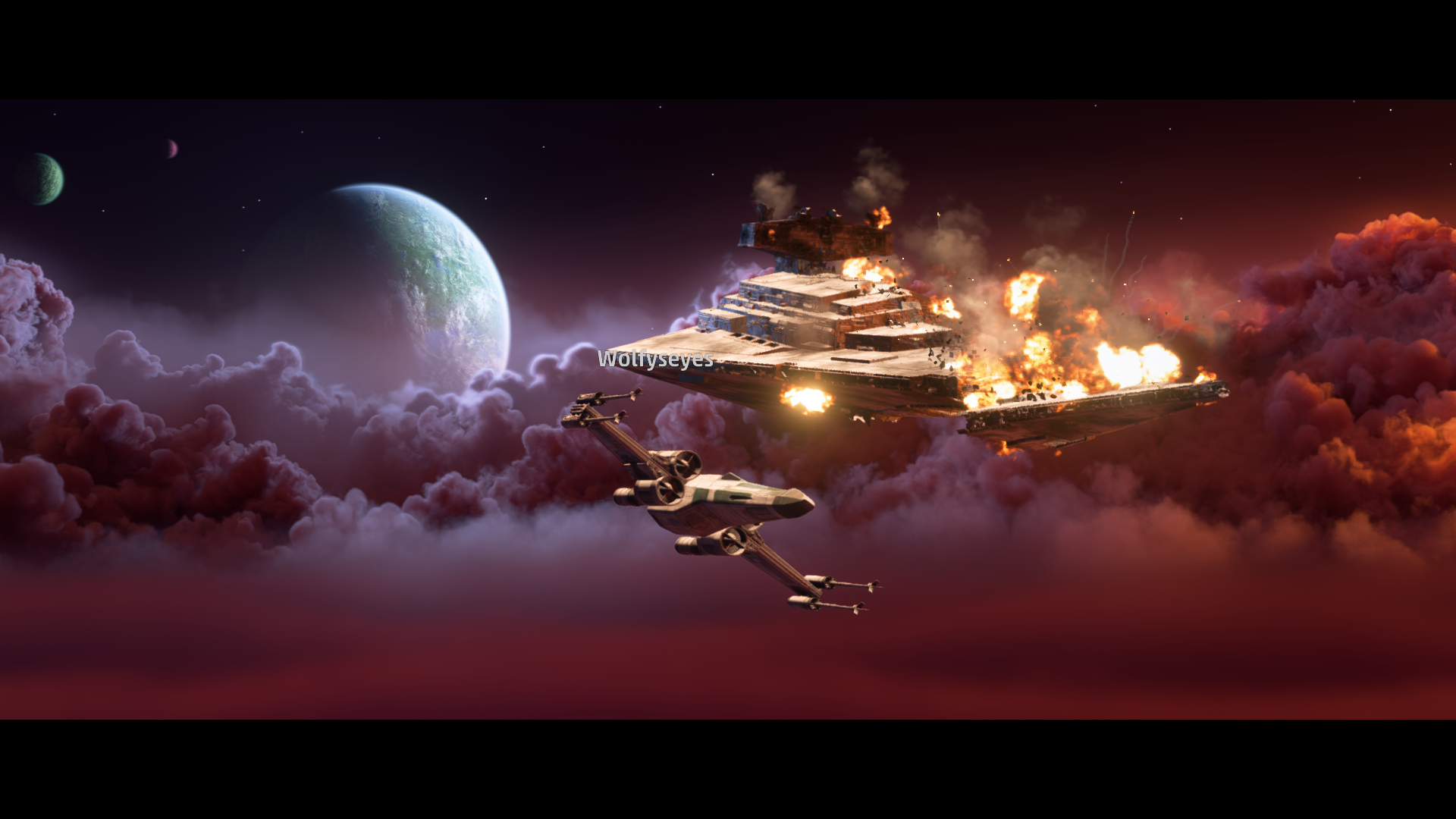 As usual, polling will wrap up at 1:00 p.m. EDT this coming Friday, October 23rd. Also like usual, I’d like to thank those of you who are participating and leading along this weird little idea of mine. And a special thanks to my husband WelshFox as well as my extremely good friend Britarnya for flying along with me for this article, even if I was a salty salamander at the end of it all.

I can’t believed they missed that one. In Elite:Dangerous, and even in the old X-wing Alliance, if you reduce your speed to zero, you turn very slowly. So you have to keep moving at some speed otherwise you are a sitting duck.

I know elite has to sometimes apply gameplay mechanics over real world mechanics (that’s why the Newtonian /Flight Assist Off mode is so limited) but Star Wars shouldn’t need that excuse.

I hope they patch out turreting otherwise a lot more players will leave like Chris.

How disappointing… not surprised some folks prioritize kills over actually playing though. So no counter tactics to stationary ships?

You know it’s bad when they even programmed the AI to adopt this behavior; in the AI fleet battles, the vast majority of my deaths are at the hands of stationary fighters just swiveling around idly. There’s zero penalty to movement at slower speeds, and this is one area I wish developers would look to Elite: Dangerous for inspiration.

tldr – speed needs to have an effect on turn rate.

Welcome to the world of competetive PVP, where there are always people trying to cheat in any way they can. Unfortunately unless you are playing against friends, that is typically the case. That said I liked the single player part and story of that games, so there is that