A question that comes up consistently for any Kickstarter MMOs is whether or not the game is ready to be played. Love it or hate it, Kickstarter games have often opened up player access to these games like never before. And a lot of backers will remind you that the game is in development, the game’s going to be buggy, it’s only pre-alpha/alpha/alpha 242/pre-beta, and on and on. While there is a lot of legitimacy to this reasoning, it also gives MMO studios an incentive to keep releasing beta patches and never actually officially launching the game. “Hey, you can’t be mad bro. It’s beta!”

But this is a legit question for a game: Is it launched or not? If players can get their fingers chapped while spending hours playing your game, then the question is valid.

So how does this play into the current state of Crowfall? Well, I’m here to stand before you all and give you a definitive answer: Maybe!

The latest patch was a huge class talent and specialization overall

The reason I’ve been thinking about this question lately is largely because of the most recent patch posted by ArtCraft last week. In it, we saw a gigantic overhaul to the existing class talent trees and skills. This sort of update is a great sign that the game is approaching a fully playable status.

I asked several questions about the update in our interview with Rhea Shelley, so if you want to understand the actual intricacies and thought processes behind the update, you should check that out. But in sum, the array of talents and skill points has been significantly streamlined. Choices that players rarely made were overhauled so that there is no single best option for each class; instead there are different bonuses for different playstyles. On top of that, the devs added the Domains system, further expanding on the importance of your choices while building a character.

Now, I still have misgivings about the entire vessel and necromancy system. I wrote up a lot of my thoughts on it previously. It’s just difficult for a lot of MMO players to throw away the concept of having a “main” character. I still play my Guardian from Guild Wars 2’s launch!

Still, I wouldn’t describe myself as a min-maxer, but I think on paper I might be. I’m really into the “game” of trying out different builds and combinations, of seeing what works and what doesn’t. This is one of the main concepts that I love about the Guild Wars franchise. Even before you could freely switch skills and stats, there was always the PvP mode where experimentation was readily available and encouraged. I just don’t like making choices that turn out to be trash and find my only remedy is to… start it over.

Regardless, the fact that skills, talents, and streamlining those systems are the sort of features ACE is focusing on in Crowfall is a really great sign about where the game is headed. We aren’t seeing foundation-level patches in this case. The specialization update isn’t a new feature like adding a crafting system or adding harvesting. This is refinement. 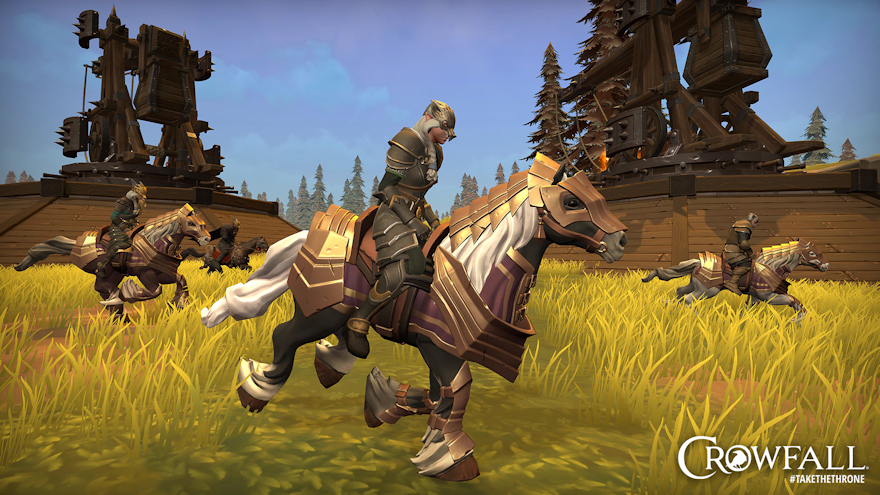 The combat gameplay loop is ready

So if we want to know if the game is ready to be an MMO player’s daily driver, we need to understand whether we have enough in the game to do. Can you sit down to play with a goal in mind and find a way to achieve it? In this case, it is a resounding yes.

I’ve previously discussed the God’s Reach and Infected zones, where players can level up and then ultimately join the Dregs campaigns. There is a clear path to playing the game and achieving results. The Dregs campaigns include several different win conditions for guilds to focus on and achieve. This gives players something real to do. You start playing to level up, then find a means of gearing up, and finally try to earn some victory points for your team.

However, this gameplay loop is kind of limited currently. If you are the kind of player who enjoys making connections within your guild and working together toward some of these specific tasks and goals, then I’d say you’re set. But if you prefer to keep your head down and just grind out your crafting, I think there are still some missing pieces.

While gear does have durability, I don’t think we have a solid repair system yet. There aren’t a lot of different cosmetics in the game either, so you won’t be able to really create a marketplace for yourself to stand out with the best-looking set of this gear or that. Crowfall does have some options available in the Eternal Kingdoms and even some market stalls for players to sell their wares, but there isn’t a real economy for this gameplay yet.

While relatively small, there is a very committed and active playerbase

Another aspect to consider when determining whether a game is ready for your time is the playerbase. Very early on in a PvP game’s life there simply isn’t that critical mass of players that enable the combat to be fun enough.

Admittedly, Crowfall’s playerbase is still relatively small. I say that thinking of the big four (World of Warcraft, Final Fantasy XIV, Guild Wars 2, and Elder Scrolls Online) and dozens of other released MMOs. However, even with that in mind, playing the game when a patch arrives sees players all around. It’s a clear contrast to even just a year ago when I started playing Crowfall. Back then, I could run around the map for hours and never see a soul. Nowadays, though, there are players hanging out in the lobby cities and leveling up throughout the zones.

On top of that, the community in the game is serious and helpful. In addition to the one big guild, there are dozens of guilds with 50+ active players, many of whom are clearly already playing daily. Joining one of these guilds will give you plenty of community and things to do. My guild regularly sets up leveling groups, campaign raiding teams, and even Eternal Kingdom practice fights.

So, back to the question from the top: Is Crowfall ready to be your daily MMO? Well, you can already fight in RvR maps and claim keeps and camps for your guild. Players can level up and craft the best items in the game. If you consider this the type of gameplay you enjoy, then I’d say it’s ready to be your everyday game. If you’re more like me, and you enjoy being shiny and having more independent goals in mind, then it probably isn’t quite there yet. But it’s close!

What are all of your thoughts on the current state of the game? Are you already a full time crow? Or is there something still missing for you?