It’s certainly been rough seas for Amazon’s upcoming New World over the past year — especially with a significant change of development direction for the title and several delays — but at the end of it all may be a welcome harbor for an eager fanbase. That’s thanks to the fact that the revised and retooled fantasy/horror MMORPG actually seems to be striking a chord with testers who peppered the title with positive word-of-mouth during this past summer’s playtest.

Now that New World’s dipped back into alpha testing and quiet development in anticipation for its 2021 launch, Amazon is eager to keep the ball of hype rolling. The team reports that it’s been hard at work stuffing in a lot more midgame content — such as better combat and additional quests — into New World. The delay also allowed for the introduction of spears as a weapon for adventurers who would rather keep danger at the end of a long, pointy pole.

This week, Amazon invited Massively OP to check out a demo of an upcoming alpha build of the game that will include two significant additions to the MMO: an endgame zone called Reekwater and the fin-slapping fun of fishing. 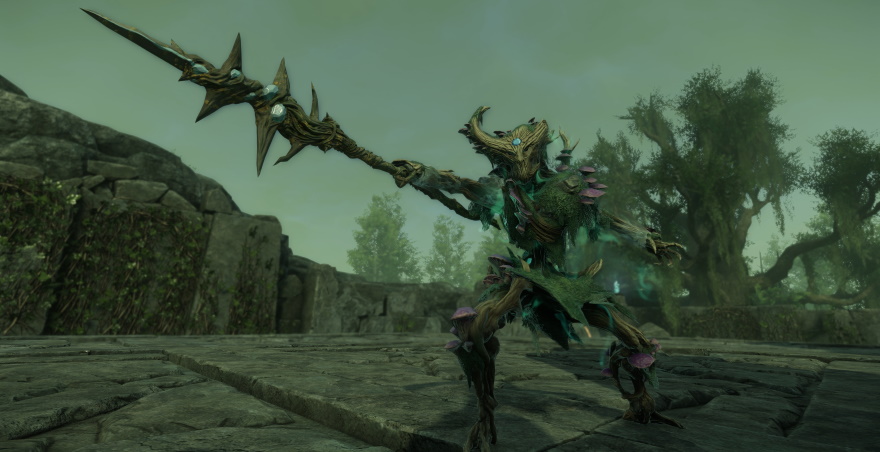 As its name suggests, Reekwater is a pungent swamp that shouldn’t have been anyone’s first choice for a new home. But some fools did just that, then discovered that a Siren Queen wanted to move in and gentrify the place, and everything got a lot more messy.

Reekwater is described by the team as “where life and death meet and shake hands,” which sounds very congenial to us. It’s dripping with green decay, made all the worse by supernatural threats and the aforementioned Queen who figures that she’s the boss in these parts.

Players who do decide to venture into Reekwater best bring their big kid pants (and other endgame gear) as they push back against the Siren Queen, explore a Venice-like Bayou Village, learn about the lifecycle of the local dryads, and maybe even answer a question or two about the origins of the Guardians.

It’s never really an MMO if it doesn’t include fishing, right? Apparently Amazon Game Studios thought so too, because the team was bouncing with glee to announce that angling would join the menu of available activities while players explore Aeternum.

Besides giving you a laid-back option between being ganked or turned into a voodoo puppet, fishing has a purpose. Whole fish can be used for various crafting recipes, or alternatively, they can be “broken down” into parts for other uses. That sounds even smellier and messier than Reekwater, but who are we to judge?

Of course, you’re going to have to land a fish before you can use it. Fishing requires the navigation of a couple of quick minigames to cast a line and reel in The Big One. Amazon said that the game will stock its lakes, rivers, streams, and oceans with over 40 types of fish, with some of the aquatic residents preferring one zone over others.

The best place to fish in any given location is at a “hotspot” where the water bubbles, fish fly into the air, and fishing time is decreased. Players with higher fishing skills are able to locate more hotspots than others, giving them an advantage in the escalating race to open and run a seafood market (we’re guessing).

It’s at these hotspots that the game’s more rare fish can be found, because of course there are fish rarities. The ultra rare fish — sea monsters — only pop up once in a blue moon and require the best of skill and luck to reel in.

Diving into the demo

After a brief presentation about these two new features, we were invited to jump onto the alpha server and try out the game for ourselves. Why am I still talking in third-person plural when you know it was just me? We have no idea. Perhaps we are royalty.

Initially, we faced a lot of hiccups, crashes, and outright failures to connect — which is probably pretty typical for the alpha experience. But once I was in, I discovered a game that feels and functions, well, like an MMO should. That’s a good thing, by the way. It means that New World is pretty intuitive to any beginner who has played an online game somewhere else, and I ended up not asking for quite as much clarification to my hosts as I expected to be doing.

Like probably any swamp zone in an MMO, Reekwater isn’t going to be my cup of tea, but it was still intriguing to explore it. As everyone in the demo was standing around and allocating mastery points and whatnot, I spotted a grazing buffalo nearby and thought… hm, why not? Ka-blammo! went my musket, and two seconds later, an angry bison charged right into the thick of a group of woefully unprepared players. It knocked people left and right, but everyone recovered fast and that buffalo became that night’s main course.

Shooting myself in the foot

There are two things that really stood out to me during my hour or so in the demo: combat and environment. Starting with combat, New World uses an action (versus tab-targeting) system that lacks any sort of locks or aim assists. The dev leading our little tour group said that the hit box in this game is “fairly precise,” meaning that you really did need to be aiming or positioned right to make the hit. In frantic fights where enemies were running or floating all around the place, this made for a far more annoying experience than I liked.

However, I got used to it fairly quickly and took to my role as a musketeer with gusto. Once I specced up and had a few skills at my disposal, I started to get the hang of firing a gun that required a few seconds of reload time. It felt like being a sniper on the go, and the sound effects made firing these muskets quite satisfying. Even more satisfying was when I hit something, which was… not a lot at first, but far more later on. I even sniped a geist that was skidding all over the place like a caffeine addict on that final pot of the day, and I felt accomplished for it.

My first impressions of combat are, therefore, adequate but not ideal for the tab-targeting fan. It’s really easy to get overwhelmed by more than one mob, and if you have a melee weapon equipped, you’ll probably end up flailing about frantically rather than going through a carefully choreographed dance of death.

Come in, if you dare

The environs of Reekwater made for a far better ambassador for New World. The whole place felt like a giant haunted house, with off-kilter beached ships, hidden graveyards, and dryad landmarks. It reminded me a lot of Elder Scrolls Online, especially in terms of visual design and attention to detail, and that’s great for any explorer. The game world’s 13 of so zones call to me with possibilities, and sooner or later, I want to answer and see what they hold.

And yes, I tried fishing. I’ve never found an MMO that’s made fishing a “must do” activity for me, but I have to say that New World has a pretty good setup here. It took me a couple of tries to get used to the sequence of fishing, but once I did, I actually got a bit of the feeling of hooking a catch and reeling it in. Mmm, red snapper, very tasty!

Overall, I’m pretty impressed with my first session with New World. I can see why people have said that this game has promise, because it definitely feels solid and (in parts) polished. It’s shaping up to be a strong launch candidate for 2021, and I can only hope that Amazon continues to round off those rough edges and pack in as much content as possible to keep players around.