It was often remarked going in to this week’s Choose My Adventure task that base building in No Man’s Sky is something of a black hole. I just sort of assumed that was in relation to chasing tech trees, unlocking items, and building up like usual survival sandboxes. However, I was pleasantly surprised by just what else was waiting.

To be fair, the usual progression that I’ve experienced in other survival games was absolutely present here, with additional items opened up through the Base Construction item or learned through blueprints. And I had a surprising number of things available to me by the time I retraced my steps to my chosen paradise planet, along with a lot of the materials I needed to get started. At long last, my weeks’ worth of hoarding was bearing fruit.

I wasn’t ready for storylines, though. 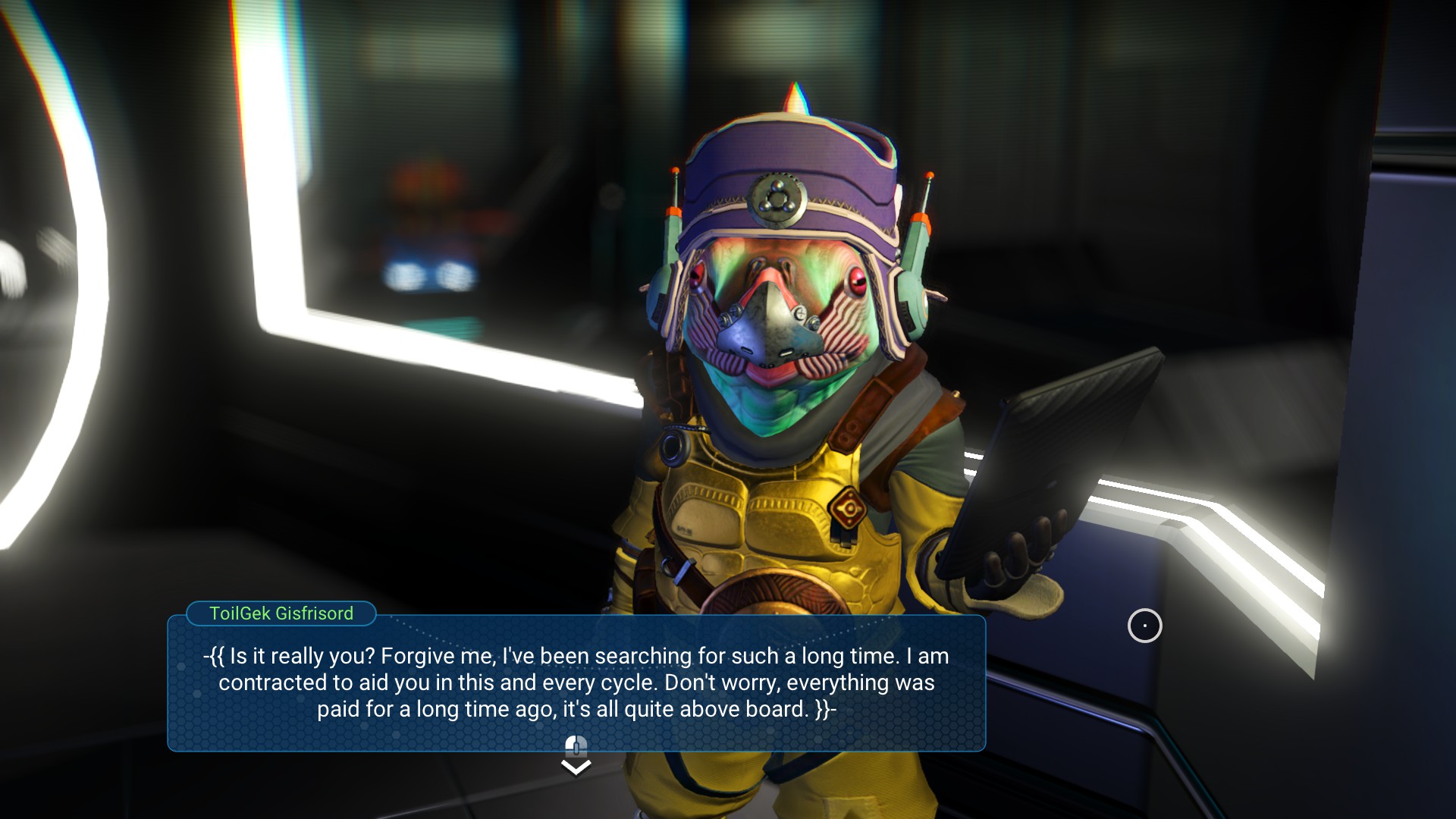 The quest steps laid out for me like they have other times, both in No Man’s Sky and in other games before. In this case, I was being guided towards building stations for construction, science, and weaponry. However, it was all interwove with a narrative – perhaps even linking with the overarching lore of the base game itself – and was beginning to tell an intriguing tale.

Apparently, the construction Gek I had hired knew me from before or from a past life or iteration. The Korvax was eager to follow me as part of some divine destiny for his people, whether it was to get new materials or to clean my windows. And then there’s the Vy’keen warrior who was living vicariously through me as I hunted down targets. It was that last line of chores that I was chasing most closely up until the point where I had to find Vy’keen daggers.

While these stories aren’t what I’d call particularly gripping narratives, it was more than I had anticipated to see in the process of building up my character’s home. All I was expecting was to just follow tech trees, not meet characters. It made the game’s world feel a little bit more alive, and made building my base up from nothing that much more involved. 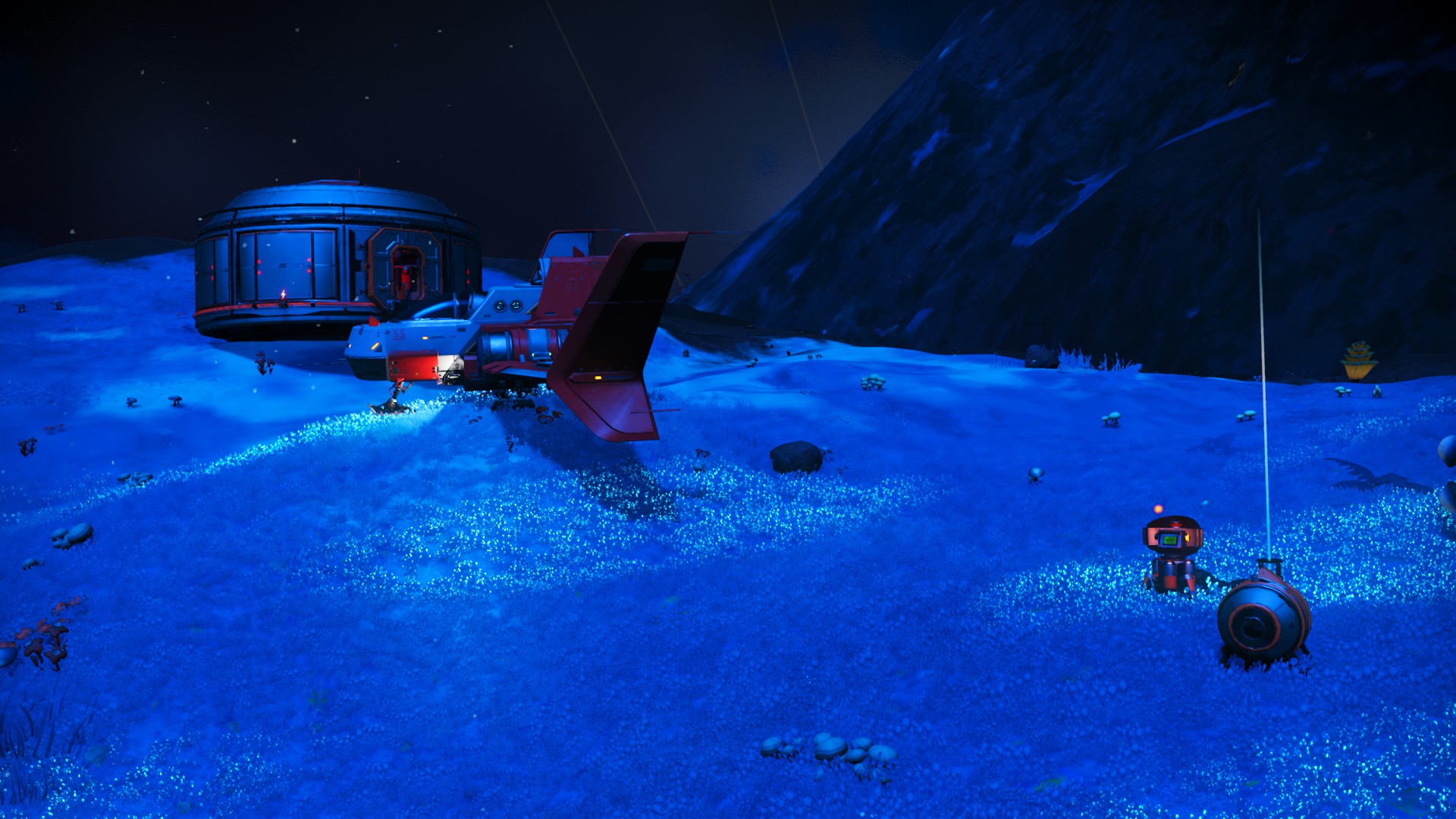 The building part, though, I didn’t really dig in to too much. Partially that was because I was following storylines, but mostly it was because there were a lot of things to unlock. It was the first real time that playing No Man’s Sky in normal mode felt like a hindrance; all I was able to really put down was a cylindrical room that was crammed with three specialist stations.

And I know that there’s more to base building in this game than that. At least from a creative point of view. For once, I was kind of wishing I was in sandbox mode, especially in this planet that had literally perfect living conditions. So maybe I’ll circle back around, play in sandbox mode, and see if I can’t find that needle in the galactic haystack again. After all, as I said last week, discovery really does feel like the point of No Man’s Sky.

As I’ve travelled through the stars of this game for the month, I really have come to appreciate just what this game tries to do. It’s not particularly challenging. It doesn’t really demand a lot of careful survival mitigation, at least in normal mode. The tasks that you can chase after and the goals you can complete are, by and large, pretty simple. Taken at those individual parts, No Man’s Sky does feel like it’s not doing anything it tries well.

Combine those pieces together, however, and the whole game comes alive. It really is better than the sum of its parts. Especially for those who just want to explore and find things. Sure, there’s guides and steps to take. There are overarching plots. Obviously there’s a bigger mystery about why my Traveler is here. But my time really has been about combined aspects.

This has been an absolutely fascinating ride. And I think I might continue. Or start fresh now that I have some knowledge. I can’t wait to find out more. 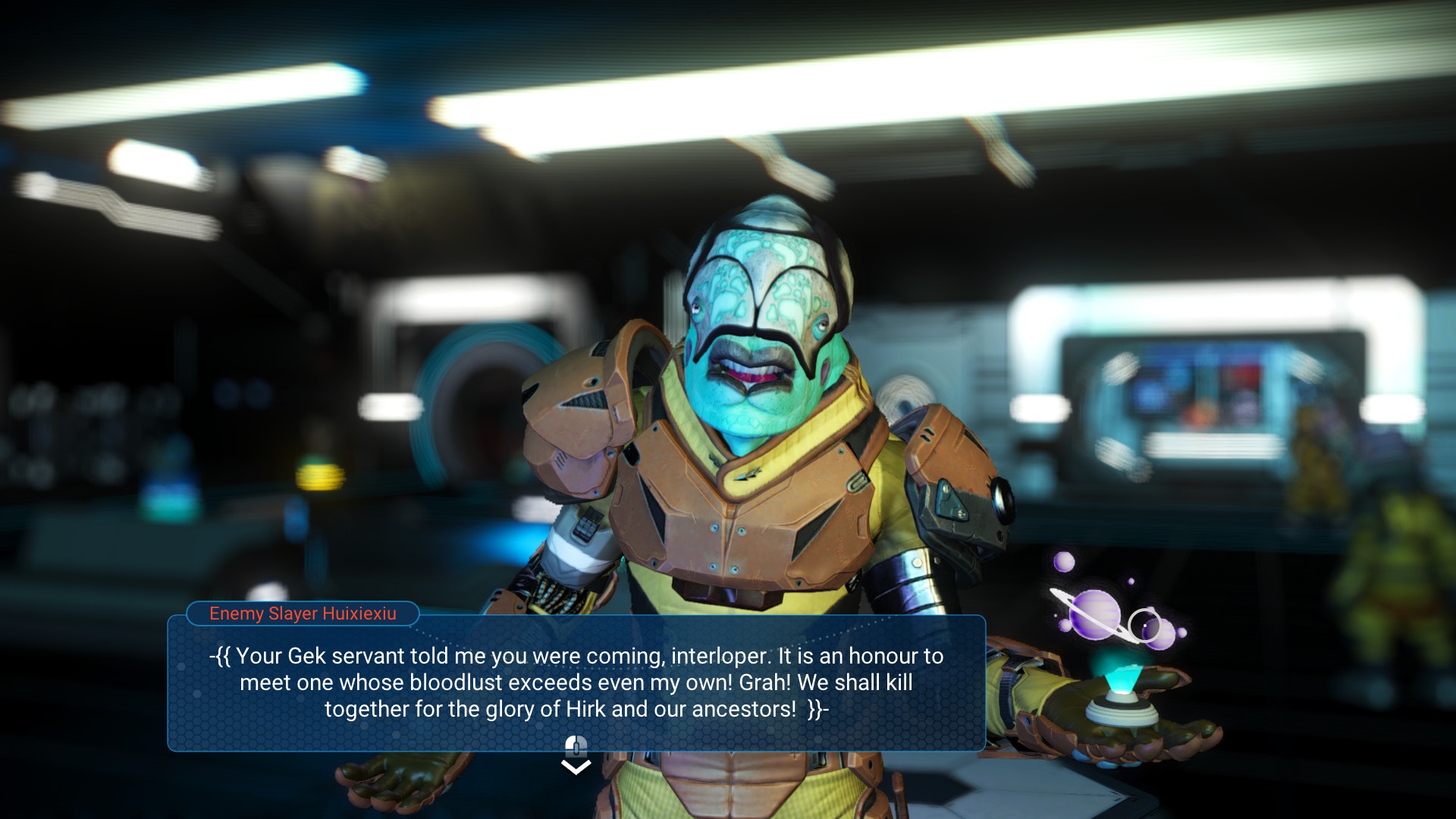 That all said, for the purposes of this column, my time in No Man’s Sky is at a wrap, and it’s time to look in to December’s adventure. And to close out this year, my first-ever trip to the West Virginia wasteland is back on the menu.

With help from some of you fine folks as well as other internet denizens, I was able to get my Windows 10 copy of Fallout 76 working properly. So to honor my previous promise that I made several weeks ago, we’ll be making our first steps. But, as usual, it’s a question of which direction to go. Thus, the poll questions:

What should be my first order of business in Appalachia?

What should be my first Perk card? 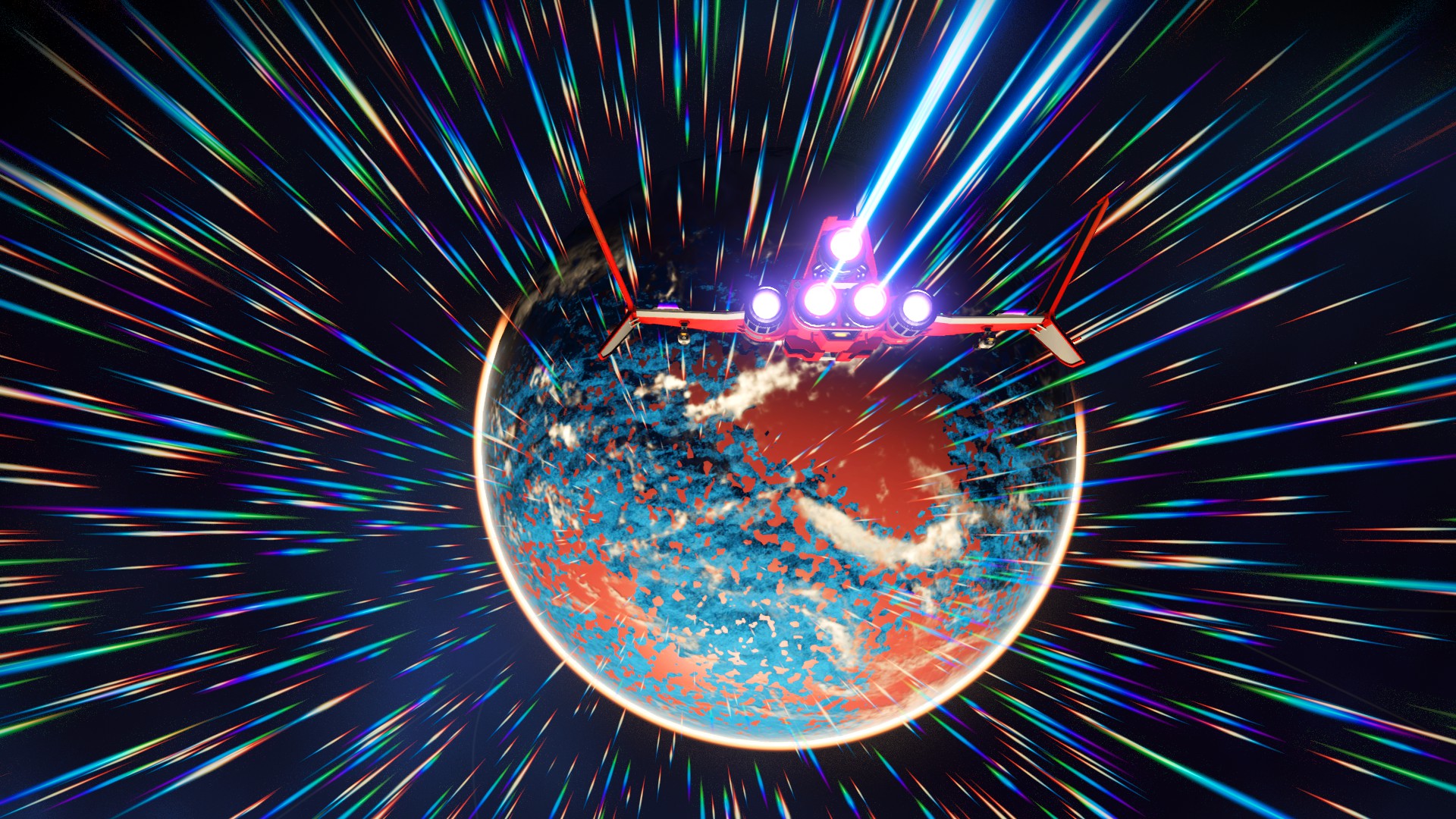 As usual, polling will wrap up this coming Friday, November 27th, at 1:00 p.m. EST. Until then, I’m going to ponder whether I should press on with this normal run or hop into sandbox and really dig into the core of No Man’s Sky.

>Spends a month in No Man’s Sky.
-Still flying the newbie ship.

…because I didn’t focus on raking in the millions needed for a new one (even if making money doesn’t take too much effort), and as much as I would love the prog rock organism ship, that would take too much time. :D

I think as it has morphed over time, this is the best sci-fi survival and exploration game out there anyone can buy

“Pleasantly surprised” pretty much sums up my ongoing experience with NMS

It’s both funny and sad that despite not being one, No Man’s Sky is the best example of a successful live service game

So maybe I’ll circle back around, play in sandbox mode, and see if I can’t find that needle in the galactic haystack again.

Plop down a Signal Booster and screenshot the coordinates that come up. Then you can plug them into a calculator to get the portal glyphs required to go back there.

Maybe you already know, but I figured I would drop the tip here just in case.

Fist time I played NMS was in normal mode, soon got annoyed trying to find then mine resources without sentinels getting all up in my face. Stopped playing, forgot about game.

Revisited game to see living ships, but played in creative mode to sidestep annoyance of resource gathering. Played for 455 hours, built dozens of bases. While liberating, creative mode’s lack of challenge/consequence does detract from sense of achievement.

What I would prefer myself is Survival but with the stack sizes of Normal. Normal mode is too easy, Survival makes inventory management too annoying.

“Normal mode is too easy,”
TBH I feel like I’m using a cheat code playing in “creative” mode.

The Daily Grind: Do you have hope for World of Warcraft...