I wish I could say that I’m arriving to Fallout 76 without any sort of pre-formed opinions. I haven’t ever touched this game since it first made its less than stellar debut or even after it started to pull itself together with the Wastelanders update, but I’d be lying if I didn’t also admit that I hate this IP. A lot.

Perhaps it’s because I’m a late adopter, having only ever played Fallout 3 and being sorely disappointed even though I finished its main story and a lot of its side quests, but the world of Fallout never really interested me. Nothing about its mechanics engaged, none of the characters stood out, none of the choices I made mattered. About the only thing it did to hold my interest was let me watch enemies blow apart into meat confetti in slow motion while some of jazz’s greatest voices played in the background.

Still, I felt the same way about The Elder Scrolls games and I think Elder Scrolls Online is a fabulous MMORPG. So perhaps I can put that aside long enough to get through this month. 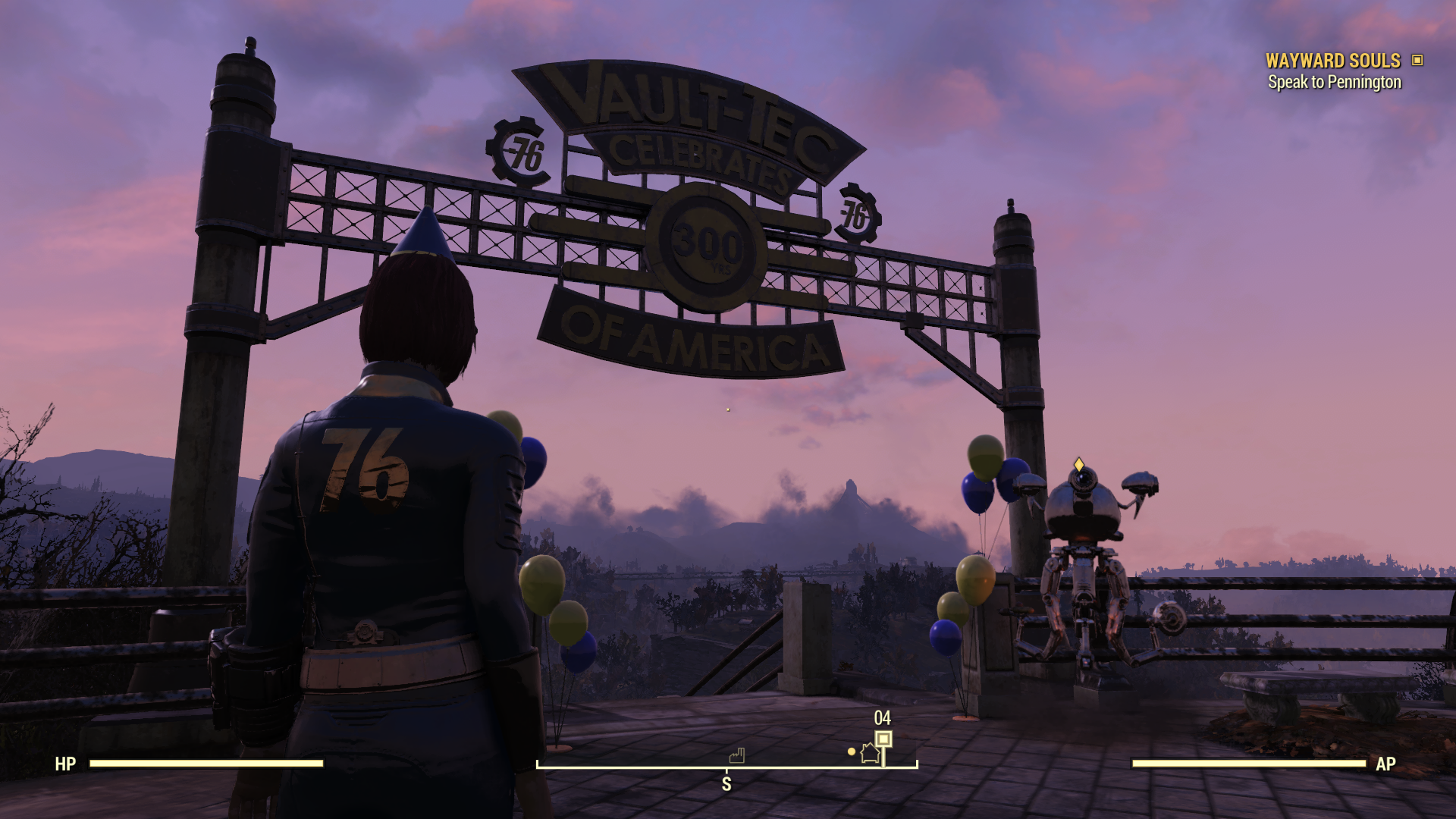 Straight away, a lot of the routine hit me square in the face. The game’s overuse of acronyms and its blase nuclear family ’50s pastiche smeared over me like so much mayonnaise. I’m a part of Vault 76 meant to revitalize America after the bombs fell. Also an Overseer for the vault disappeared and I’m made to care, I guess. Woo. Oh, hey look, I can wear a party hat.

The first NPCs I met after the stodgy butler bots were a couple of ladies looking for whatever the Big One is inside of the Vault. That seemed to be almost interesting, but just as quickly as it was brought up, it was forgotten as I made my way to the Wayward. It was here that I started to perk up a little bit as I wandered the world. Not because the scenery was interesting mind you — it isn’t — but because little side quests kept popping up. I fought mightily against my ESO-playing lizard brain to ignore all the lovely things popping up around me because I had a job to do.

…right after I clear this house of enemies. I hear a kitty in there and I don’t want it to come to harm. 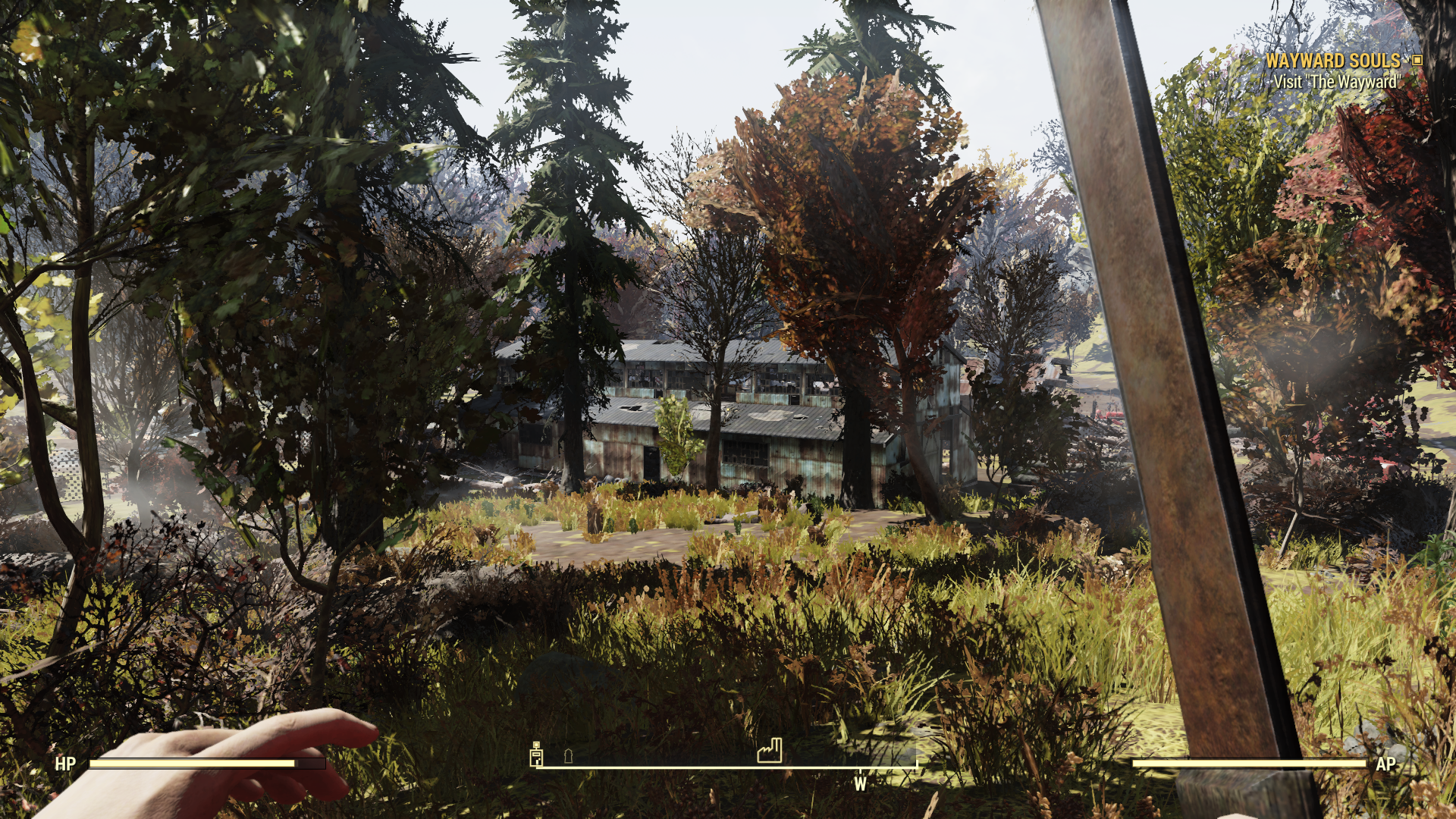 Making way to the Wayward did start me on a couple of interesting quests that actually did a pretty good job of acclimating me to the game. These weren’t the literally guided tutorials that I experienced in Vault 76 but were interwoven in to the narrative of the quest line. And a couple of the lines of dialogue were actually pretty funny, too. I don’t know if I’m going to remember Mort or the Duchess terribly fondly, but they are entertaining at least.

But then, Fallout 76 kind of let me down once more when I decided to try and use V.A.T.S., making things feel less tactical and more like turning on an auto-aim bot that sometimes worked. I even unlocked a perk that let me target specific parts, but it just feels sort of slapped on, as if the devs felt they had to have the system in the game no matter what, even if it ended up being a pale green imitation of itself.

My early time in Fallout 76, then, has been oscillating between amusement and the niggling sensation that my instincts to not care were correct. I can’t necessarily toss this in the bin so soon, but I am having a hard time working up anything resembling emotional investment right now. But we’ll see how things progress. 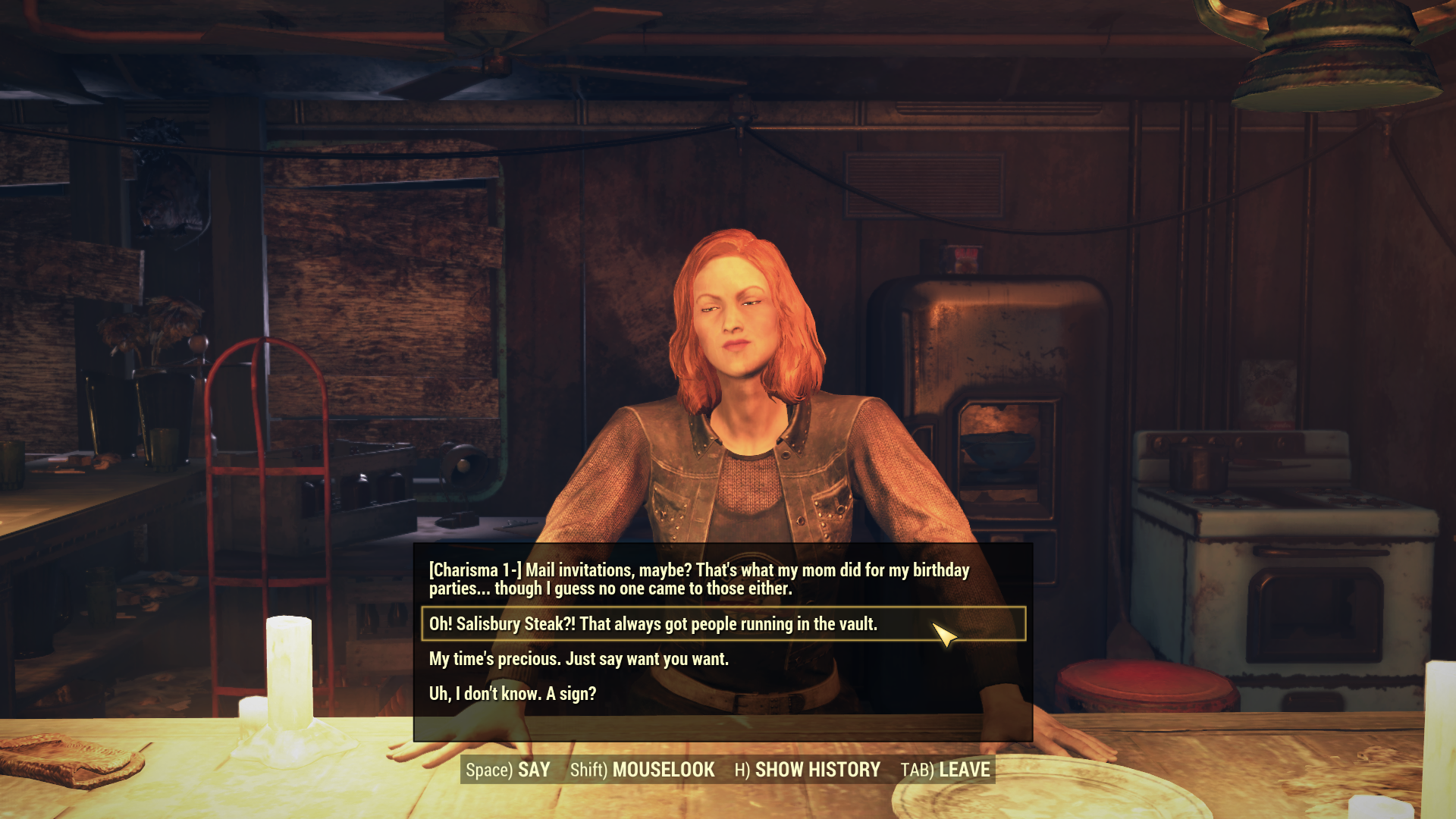 On the subject of things progressing, I’m at a point where I can make at least a few different choices here, and so I turn to you lovelies for some guidance. The next step of my quest to help the Duchess and the Wayward involves a couple of routes, and I’m open to suggestions here.

How should I approach the next part of my primary quest?

Next up, it’s once again a question of focus. I know I pretty much started off asking this question, but I once again defer to those who are playing the game more regularly on the best course of action here. Especially since a lot of resources like ammunition and caps to buy same seem to be pretty darn hard to come by.

What should be my focus while in the wilds? 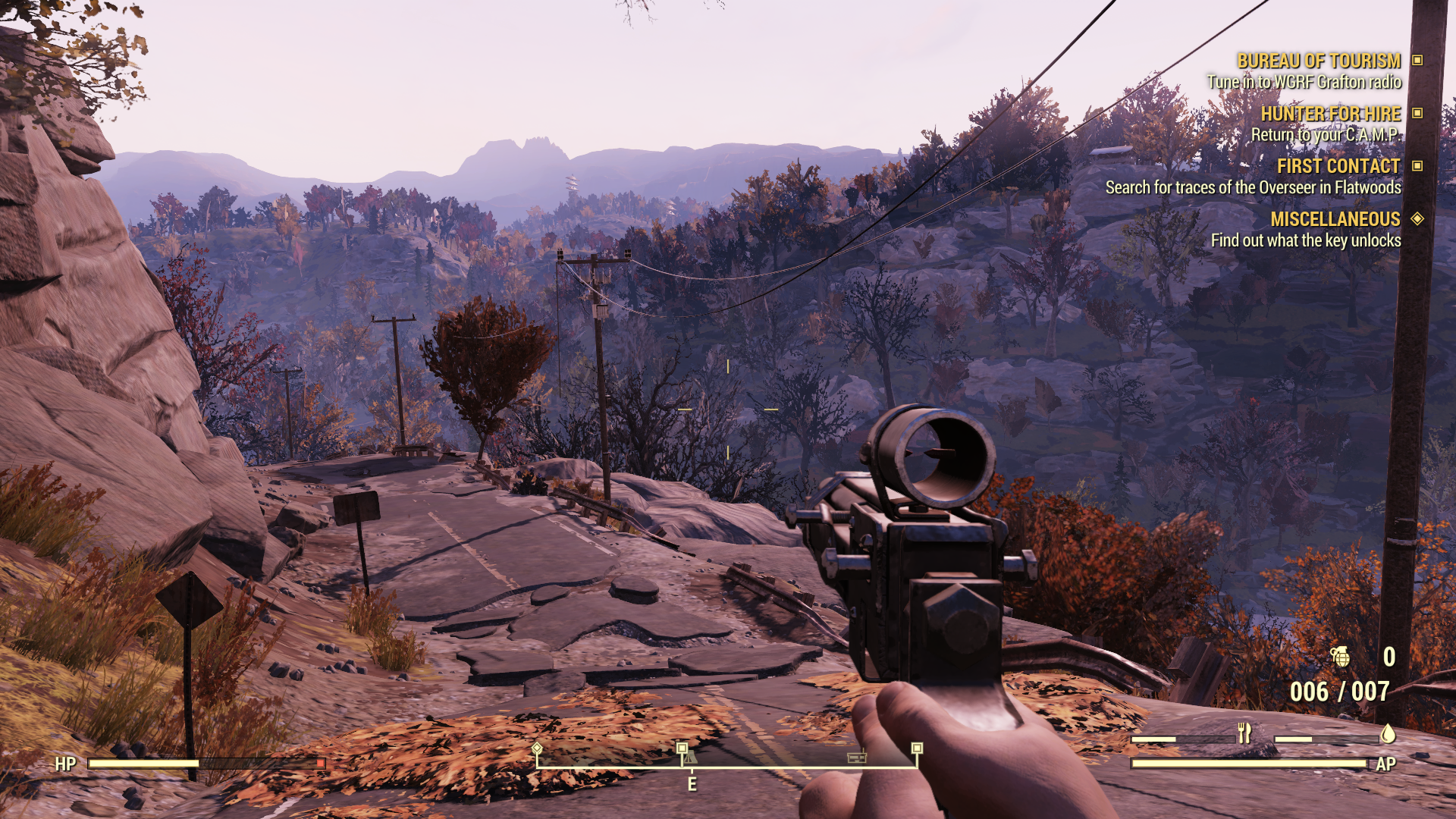 As usual, polling will wrap up at 1:00 p.m. EST this coming Friday, December 11th. For now, I’m going to be happy that I don’t have to tromp around Appalachia for a bit. I’m ready to do something else.

I enjoy the story. Reading all the pieces left behind, connecting things from months ago to some new note found in the forest… The stories woven here and there are what excite me.

Game play is what it is. Other players can be good or horrible. But the stories can be interesting. Everyone plays for their reasons. Once you find yours, you might enjoy the game.

What I really enjoy about it is interacting with other players. People can be incredibly generous, more so than in other MMOs that I’ve played. Now if we could just get text speech…

If you truly hate this game, it’d be nice to gift it to me instead. I still couldn’t afford to spend on it at its full price. For me, their persistence with silly acronym is one of the thing that roped me in.

Sadly, Fallout 76 quickly becomes little more than an elaborate doll house where you ultimately end up with nothing more to do than build your house and then decorate it and dress up your favourite ally and yourself.

Personally I’ve largely ignored all the quests I’ve had and just sort of do and go wherever I feel like. There are some progression-ish quests that do unlock things such as the Wastelanders storyline and so on, but unless you’re like really wanting to jump to a (still) fairly shallow endgame daily grind loop I’ve personally had a lot more fun by just exploring bit by bit and doing whatever I feel like.

Fallout 76 at launch was depressing as hell… meet (recordings of) interesting new people, learn how they died and loot their corpses. Wastelanders re-engaged me with live human NPCs, which seemed an enormous novelty at the time… but it lost me again with One Wasteland, which made gathering resources more of a chore than ever. I’ll probably get back to it sooner or later, but yeah, when the ability to launch actual nukes seems a little humdrum, it’s time for a break.

This is going to go well then

I reserve the right to change my mind. :) And as I wrote in the article, I felt similarly about Elder Scrolls but I love me some ESO.

I like the game, but I’m not sure its the one to make that happen.

Picked this up a few weeks back and…I’ve been super pleasantly surprised! I’m mostly just exploring around and slowly trying to work on side quests as those pile up and eat up the entire right side of my UI, but it’s not just “much better” than I thought it’d be, I’m straight up enjoying the hell outta it still.

Dang, and here I am like level 20something just slowly tinkering away. I’m trying to rope some friends into playing so I can create an alt without feeling guilty, but it seems they’re all still turned off by the poor launch and bad rep : (

That’s more an indication of hours spent playing (and a desire to try different builds) heh – best advice is take your time and enjoy the journey. There’s a huge world in there to explore. Agreed most people are turned off by the poor launch – it really isn’t that game anymore.

Also – I have a second account (one on steam, one on Bethesda) which is handy when playing multiple characters to trade stuff etc (I fire the second one up on the laptop whilst playing the main one on the PC) – got the second one for next to nothing on CDkeys

Fallout 76 and my fight against the all too familiar feeling of not caring..

If you are not a Fallout fan to begin with there is nothing in 76 that is going to change your mind and probably a lot that will turn you further away from the franchise the higher you level your character.

That said if you intend to press on stick solely with the Wayward / Dutchess quest line as much as you can as that is the best experience you will have at the start of the game.

Specifically to your poll question 1 there is nothing stopping you exploring both options to see where they lead. You can follow up on one, both or ignore them and come up with your own solution.

Best of luck and I will be interested to see if you change your mind at all.

Completely agreed, Wayward Souls is a fantastic quest. The side content, on the other hand, is very hit or miss. Some of it is awesome, a lot of it is just box-ticking.

I’m more just a fan of the exploration aspect and all the things that you can stumble into without needing a quest telling you to go there.

Speaking of which, it took me a couple of minutes to place your name when we were grouped together a couple weeks ago. Cheers!

Oh, nice! Sorry I didn’t say anything back if you tried to say hello, I always play games with voice chat disabled. :)

This is a great way to play the game and pretty much how I do things now I am a bit more established.

If you are not familiar with 76 it can be a little daunting right from the start.

The early questing does equip you both in levels and various bits of gear be that weapons, armour or camp equipment that can help the exploration be a bit more manageable and less frustrating.

Either way it’s all good as long as it’s fun.