It’s time for another title update to The Division 2. The 12th such update, to be exact: Title Update 12 is now online, and the patch notes offer up a number of details about what’s available in-game.

Much of what’s in TU12 we’ve touched on before, such as some adjustments to the Summit encounter, the addition of an Optimization Station to make items better, and some new exotics and item sets. In addition, there have been a variety of skill improvements and adjustments including the ability to always show a mask on your character, the ability to pick up placed turrets, improvements to mod filtering UI, and an increased magazine size for the Bighorn exotic. The update also marks the beginning of Season Four, complete with a new calendar of events which we’ve got below. 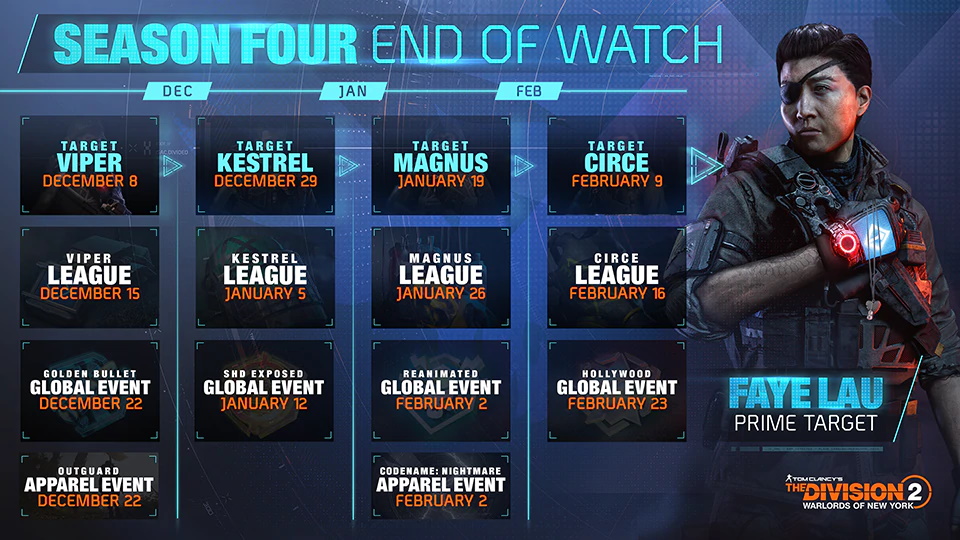 I haven’t logged into Div2 since the start of season 2; but oh boy I’m coming back for this season – Faye Lau, me and you going to have some words.

I feel the exact same way! Cant wait to see my encounter with Faye Lau. Started with her and will end with her.

just outa curiosity, did they add new content after release? Or has it been more like items and gameplay adjustments?

The seasons added events for the most case bi-weekly ‘mods’ to the missions you scored and progressed in; the other main thing they did add was the targets, like in Warlords of New York it’s expansion. It’s worth noting the expansion added Manhattan as new content and another raid as well as shaking up progression and item systems.

If you clear all the targets (by doing challenges to find them – fairly straight forward) and best the prime Target (this season being Faye Lau) you gain a skill mod currently unique to the season.

The final thing of note has been the Tower, as far as I can tell it’s a ‘go as high as you can’ gameplay rogue system, I’ve yet to play it myself as it only dropped in the past few months

thanks for the info