As per your instructions, I was voluntold to volunteer for the Responders for my return trip to Fallout 76, and boy was it something of a night-and-day difference between that quest chain and the one being handed out by the Duchess. It’s pretty obvious which of these was made recently.

The opening steps to being part of the Responders involved some rudimentary tutorial mission following that felt like something I had already done before. Or maybe I just understood how to craft boiled water and cook meat already from simple deduction. At any rate, it was informative at the very least and confirmed what I was already doing. Also, hey, free food and drink. Can’t really complain about that, right? 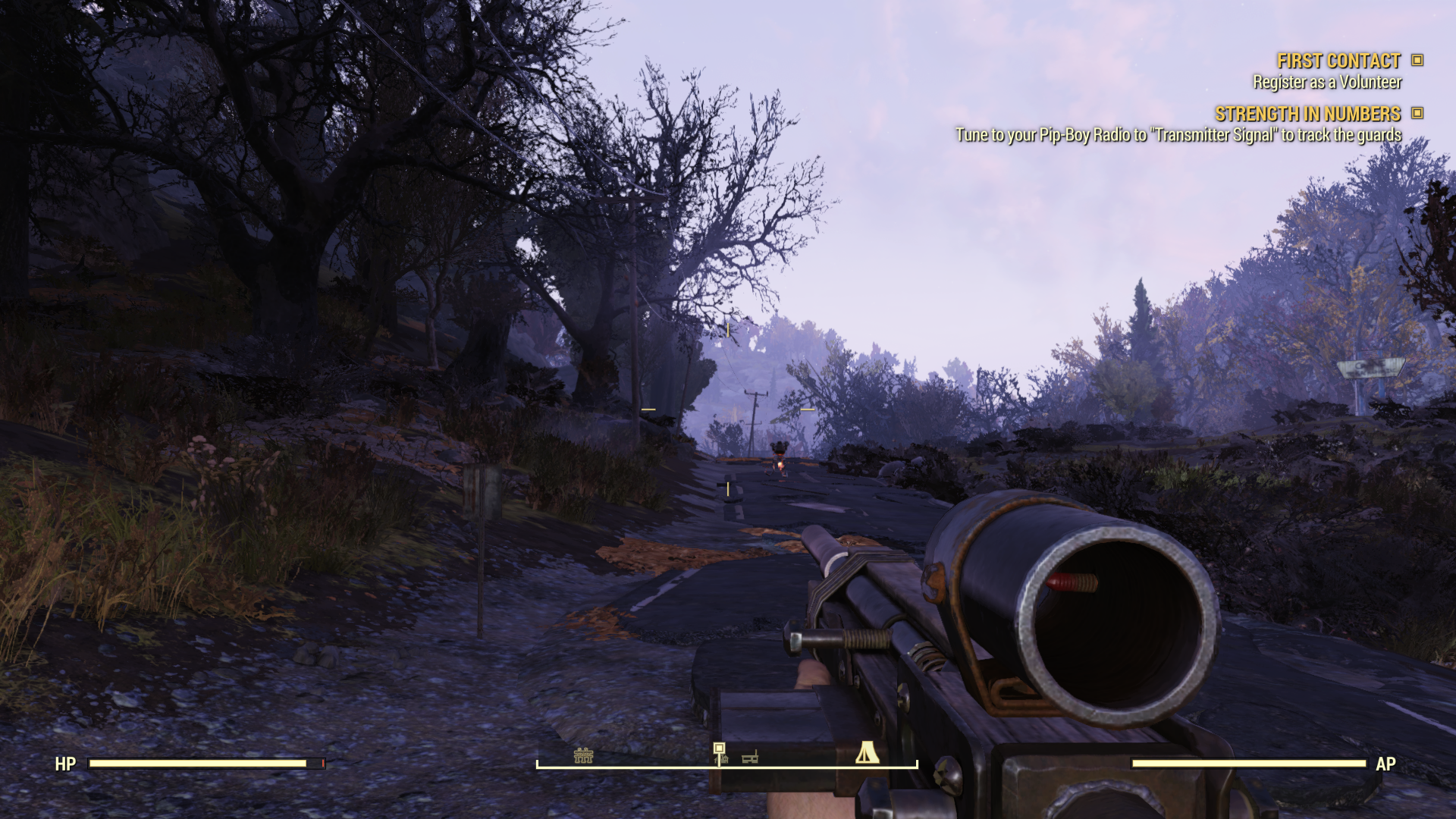 Wandering through the Appalachian wastes was pretty routine for the most part — pluck berries, shoot at robots, wonder why my shots weren’t initially landing, just stop wondering and use VATS — until I happened by an area that had some pretty obvious gunshots ringing out in the distance. Sounded like there was some trouble afoot and I needed the diversion.

What ended up happening was my arrival to a little event where I joined one other player to defend a junkyard from more robots. I’m pretty sure this individual was well kitted out, but thanks to the One Wasteland thing going on in the game now, I was able to contribute. I even managed to take out a couple of enemies that were sneaking up on my new friend. Afterwards, we were directed to a terminal to shut down targeting computers and the job was done. 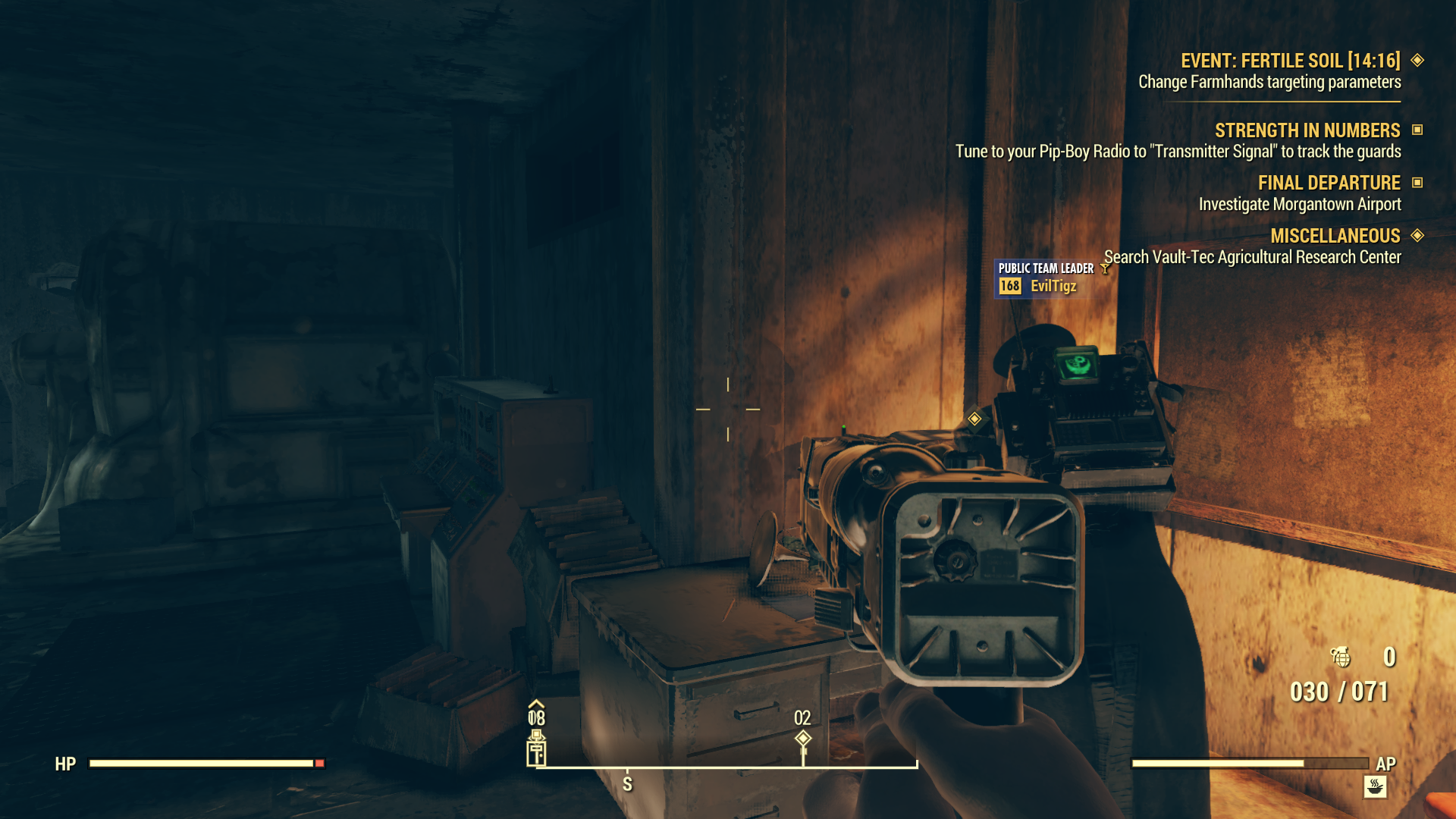 This was very much like the delve runs I’ve done in ESO, except far more enjoyable since it was just myself and one other instead of about a half dozen people steamrolling through the content. It was refreshing and one of the things I truly liked doing while in Fallout 76. Being able to divert from the path and encounter other neat things to do is absolutely my jam. Still, I had a job to do. There was an apparent attack at the Morgantown Airport and I had to clear out the Scorched that raided the place.

But not before I watched a couple of random NPC robots toddle around, one of which just sort of tripped on its own feet, gave up, and fell over. In any other universe, that’d qualify as weird. 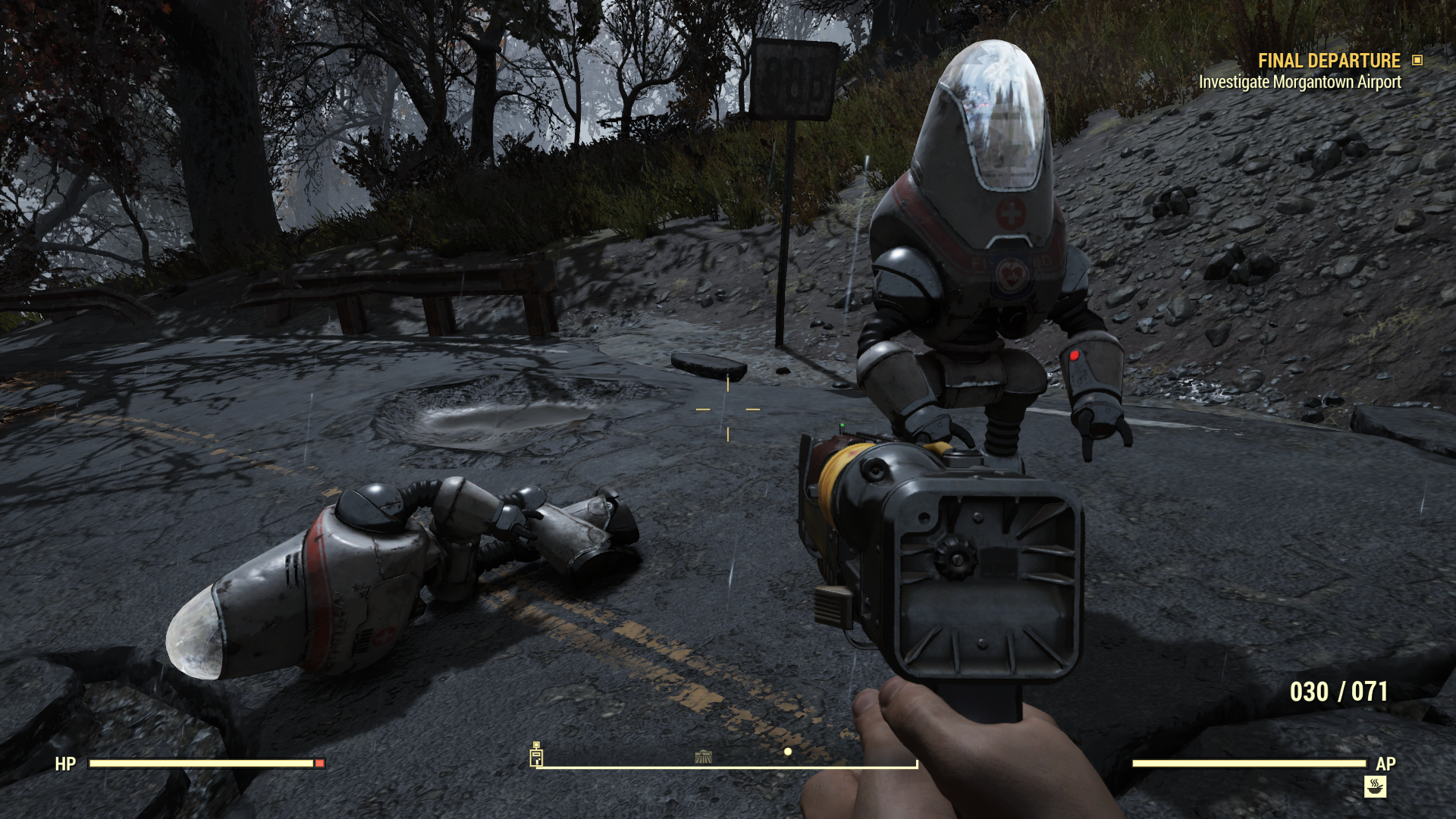 The Morgantown Airport is where things started to get a little bit challenging and dicey for me. My ammunition was beginning to run thin, and there were a lot of angry things that were ready to fire at me. Luckily enough, there seemed to be just the right types of ammo drops as I went along with my shotgun, blithely charging at foes and VATSing them in the head. It was about as barbarian as I was going to get and it mostly served me well.

Mostly. I did die one time after my trust shotgun broke, which forced me into the Atomic Shop to buy a repair kit in order to patch my beloved shottie together then and there. Not a fan of that, I have to say. Sure, I could have just left the airport, found a crafting bench, and repaired there, but I really didn’t want to at the time and I had enough Atoms from the free handouts to at least afford one kit. Still, the fact that I felt compelled to do that was a hard splash of cold water.

The questing up to this point was another splash, too. I was, effectively, running after audio logs. It was extremely rote and boring. And that’s pretty much when I realized that this game just isn’t really hooking in. 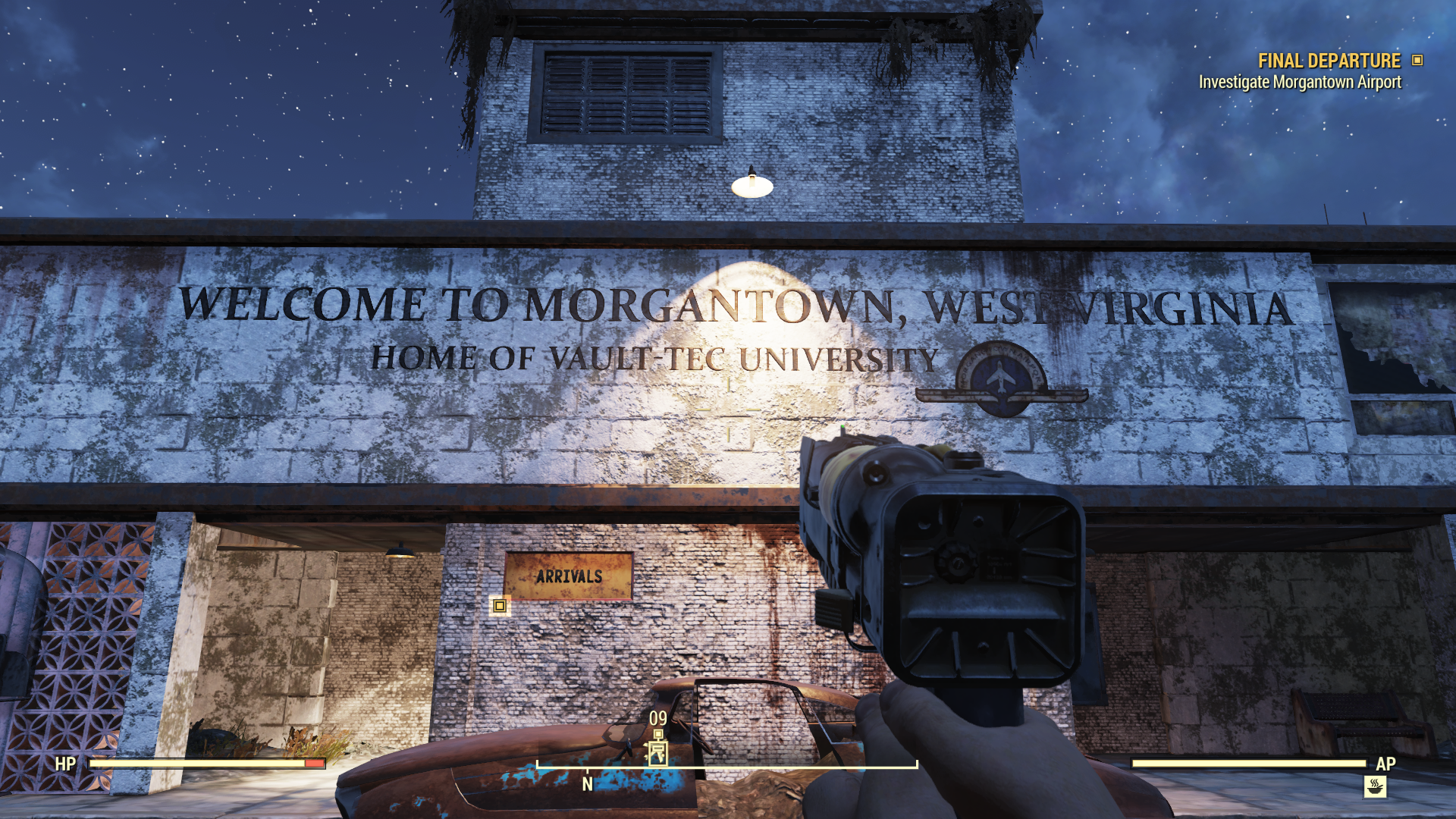 There are some good ideas here, to be fair, and now that I’ve done things for the Duchess as well as chased after the Overseer, I can absolutely appreciate that Fallout 76 has evolved significantly. Still, there’s just something about this series that I don’t particularly like and being able to play the game with others doesn’t really ameliorate that.

It’s hard for me to really put a finger on what’s missing here, but I guess it’s mostly the setting; I really dislike the ’50s nuclear family pastiche of the Fallout series, and even though I get that it’s meant to be a sort of lampooning of America’s insistence on everything being hunky dory even though everything is literally on fire just behind the propaganda poster, it just doesn’t seem to strike me as something I want to dig in to. Also, the combat is just boring and feels random and the SPECIAL Perk cards system doesn’t really fill me with a sense of growing strength, which is something I sort of hoped I would feel after 10 levels.

Even so, it is absolutely apparent to me that Fallout 76 has come a long way, and I hope that it keeps its fans. There are folks that love this game, and I might even suggest those who felt initially burned should try to come back. That said, a couple of commenters from earlier weeks were right: There’s not a lot here that’s going to sway me into being a lover of Fallout. I’m still glad I tried. 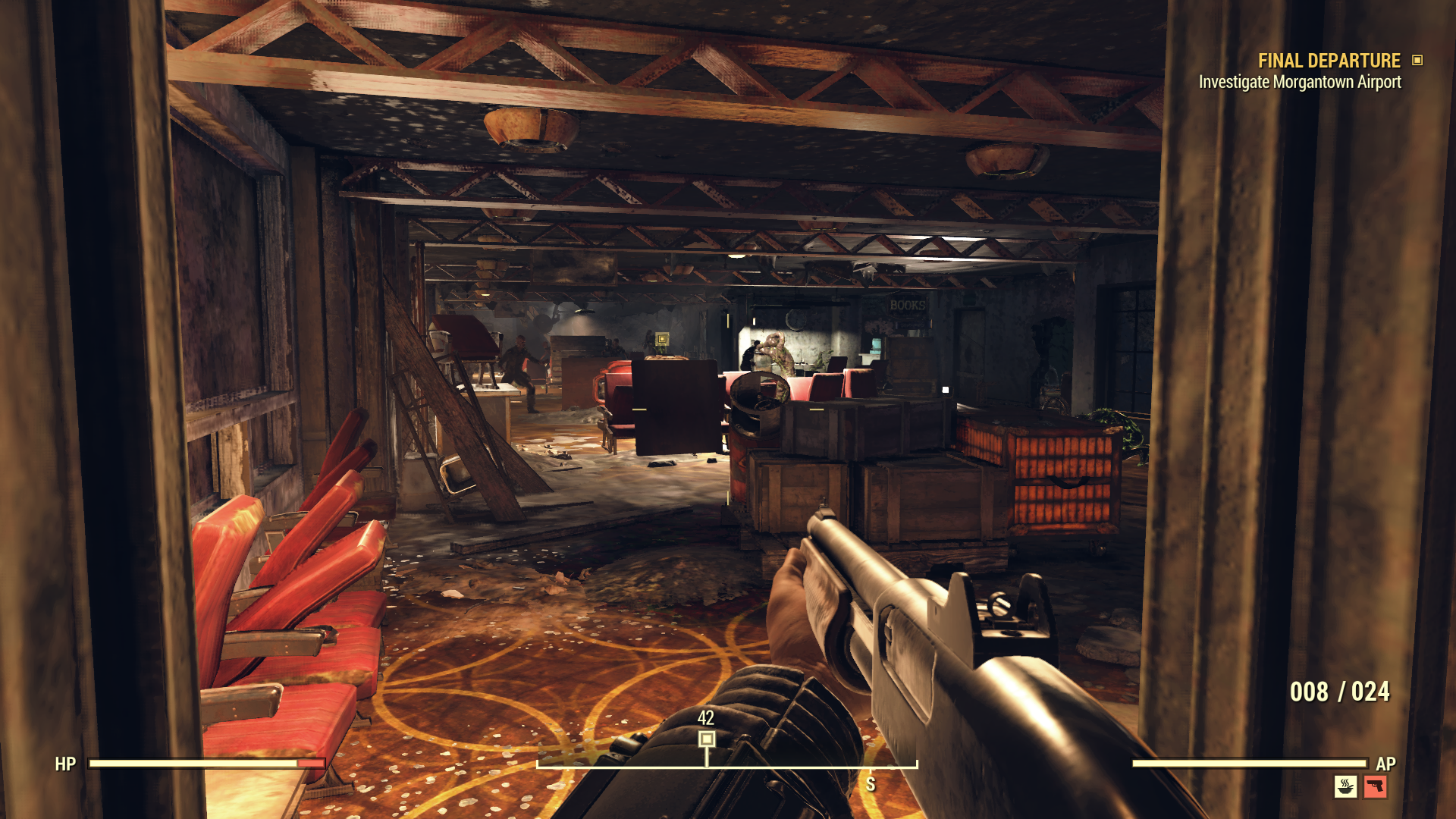 That, of course, infers that we’re trying something different, which would certainly make sense since we’re heading into the next month and into 2021. This time around, I’m going to draw from a few of the lesser-loved MMOs out there. The games that maybe don’t have a lot of spotlight time. Arguably, they also don’t garner a lot of interest, but this column is nothing if not an opportunity to try something new, even if that something new is right under my nose.

Here’s where I’m considering going next:

Which of these MMOs should we go to next? Choose My Adventure! 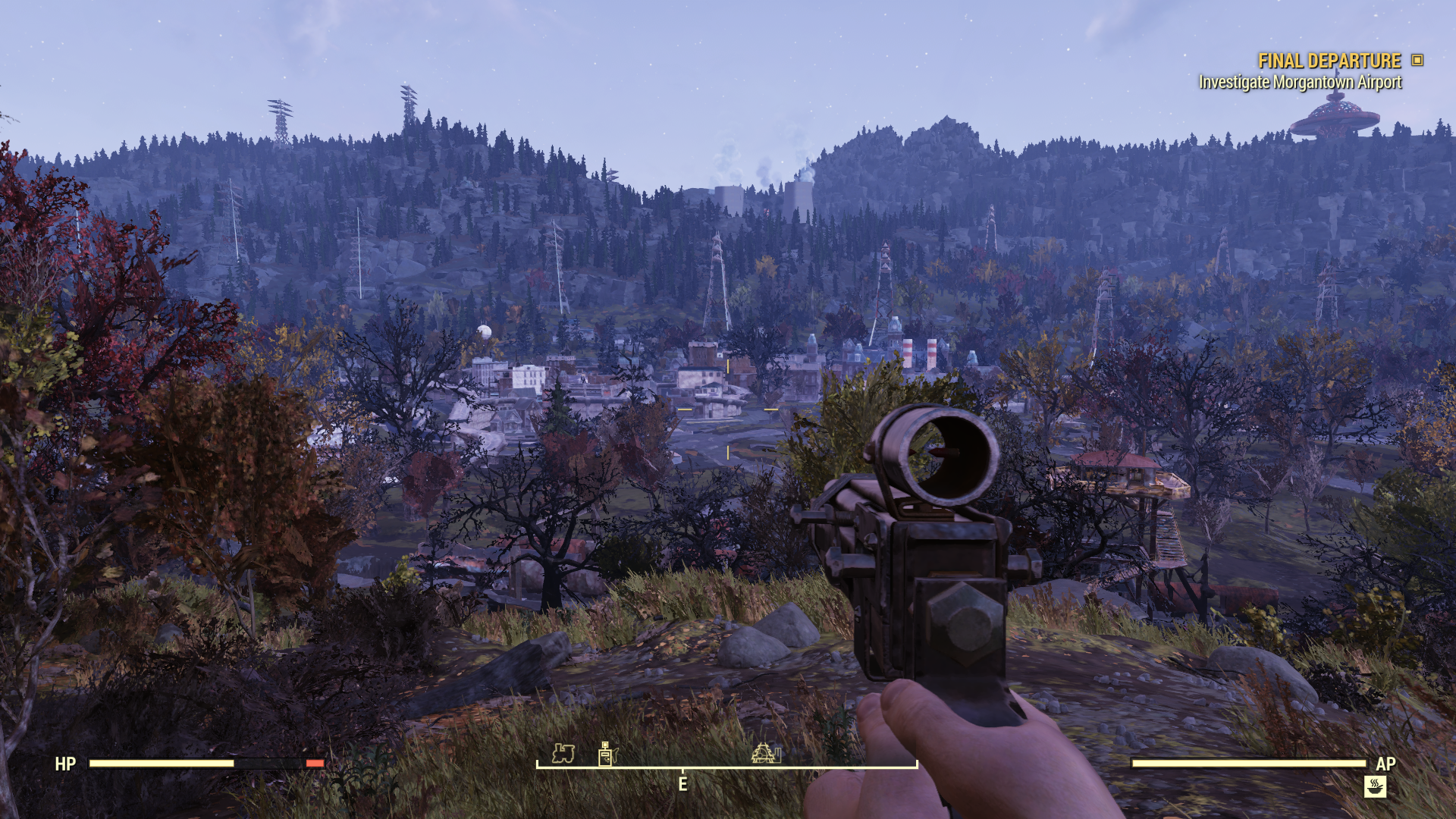 As usual, polling will be wrapping up at 1:00 p.m. EST right at the start of 2021. In the meantime, I hope everyone reading this has a safe and happy New Year’s celebration. And may all of us have a spectacularly boring, vanilla, and routine 2021. I think we’ve all had enough “excitement” for one year.

Recently tried the game and enjoyed it. But nobody does events and grouping with people is difficult. Shelving it for those two reasons.

Yup this was one of those occasions that the voting did you a disservice imo but that is the nature of CMA I guess.

There are some neat things to find in the responders quest line but really only in the latter parts of it. Up till then it’s a bit of a slog to be honest even if you are experiencing it for the first time (lord help you if you are in double figures when it comes to alts).

As for your repair issues you needn’t buy a repair kit nor did you need to spend ages searching for a workbench (there are a few at the airport but if you have never been you wouldn’t know).

Your easiest option (at least until / if you ever build a detailed camp) would have been to retreat to the edge of the airport, find a clear spot and summon your camp. You can then plop the appropriate workbench down and do your repairs then be on your way.

Again while the responders quest does a bit about the camps it doesn’t really go into details. Whereas the Duchess side of things has a series of quest explaining the benefits of camps if you talk to the feral dude Mort.

I would always encourage anyone new to the game to do The Wayward quest line to completion as it gives you a more solid understanding and is a great springboard into the rest of the game.

On the whole I have enjoyed reading your adventures in Appalachia and hope you had some fun along the way too.