There are very few MMORPGs that can plausibly compel me to sit down and log in the weekend of a big real-life move, seeing as I am surrounded by grumpy family members, boxes of everything I own, and disassembled furniture, but here I am doing just that, so you know it’s worth it. And it’s for a rogue server no less!

Yes, Star Wars Galaxies Legends, the most prominent and active of the emulators that have been running for the beloved Star Wars Galaxies in the years since its untimely sunset, is pushing out a genuine, volunteer-crafted expansion early this year. That part isn’t a secret; we’ve been covering its development since early 2019, and last month, we even learned the expansion’s name: City in the Clouds. The newsworthy bit is that press and vloggers were allowed on the Bespin test server this past weekend for a preview. I ran around like a madwoman snapping screenshots and soaking it all in! Here’s what I saw – and what you can expect if you’re thinking about hopping a cloud car yourself.

This place is massive

Bespin as conceived in SWGL is more akin to an extremely large themepark than a traditional SWG planet (themeparks in SWG are like large quest hubs with multiple levels of open-world and instanced dungeon attached). Everything I saw looked open-world, however, so it has the feel of Mustafar and Kashyyyk rather than Tatooine or Naboo. Size-wise, though, it feels significantly larger than Theed, and the topside areas have only a handful of mildly dangerous spots. It’s also just as tall as it looks, and some of those buildings actually go up several stories with views to match. In other words, it doesn’t have a direct cognate in the MMO.

One of the last things I saw from the staff guides before I took off solo on my test character to have a look around was, “You’re going to get lost!” Only a few times did I feel lost, fortunately, but that’s no mark on the City, just familiarity with the way maps work in SWG!

The exterior is just as gorgeous as you’re hoping

The only clouds I saw during my two-hour self-guided tour were the glowing sunset-orange kind, not the rainy ones. The player devs have done a stellar job with the cloud skybox and the huge, rounded buildings in particular. There are definitely meshes I do not recognize from the existing game here, so don’t go in thinking this is just a reskin.

One of my favorite parts might just be all the blue glowy holo signs, which just scream Star Wars to me. Sure, Nar Shaddaa fans probably won’t be impressed, but it’s a big step up from the low-res street signs in the 2003 edition of this game, and the animations make the world feel more alive. The onrage/blue colorway doesn’t hurt at all either.

Also, roads! Longtime SWG fans will know that players begged for roads for player cities for years, and I understand that several emulators have been working on that very problem. Cloud City’s exterior does include a ton of roads. I hope this means player-built roads are on the way too, though I do want to caution folks that there are multiple levels of roads and you can’t just hop a curb to get down to a lower level, which is a bit annoying until you get used to it.

This seems bad… (but check out those reflections!). 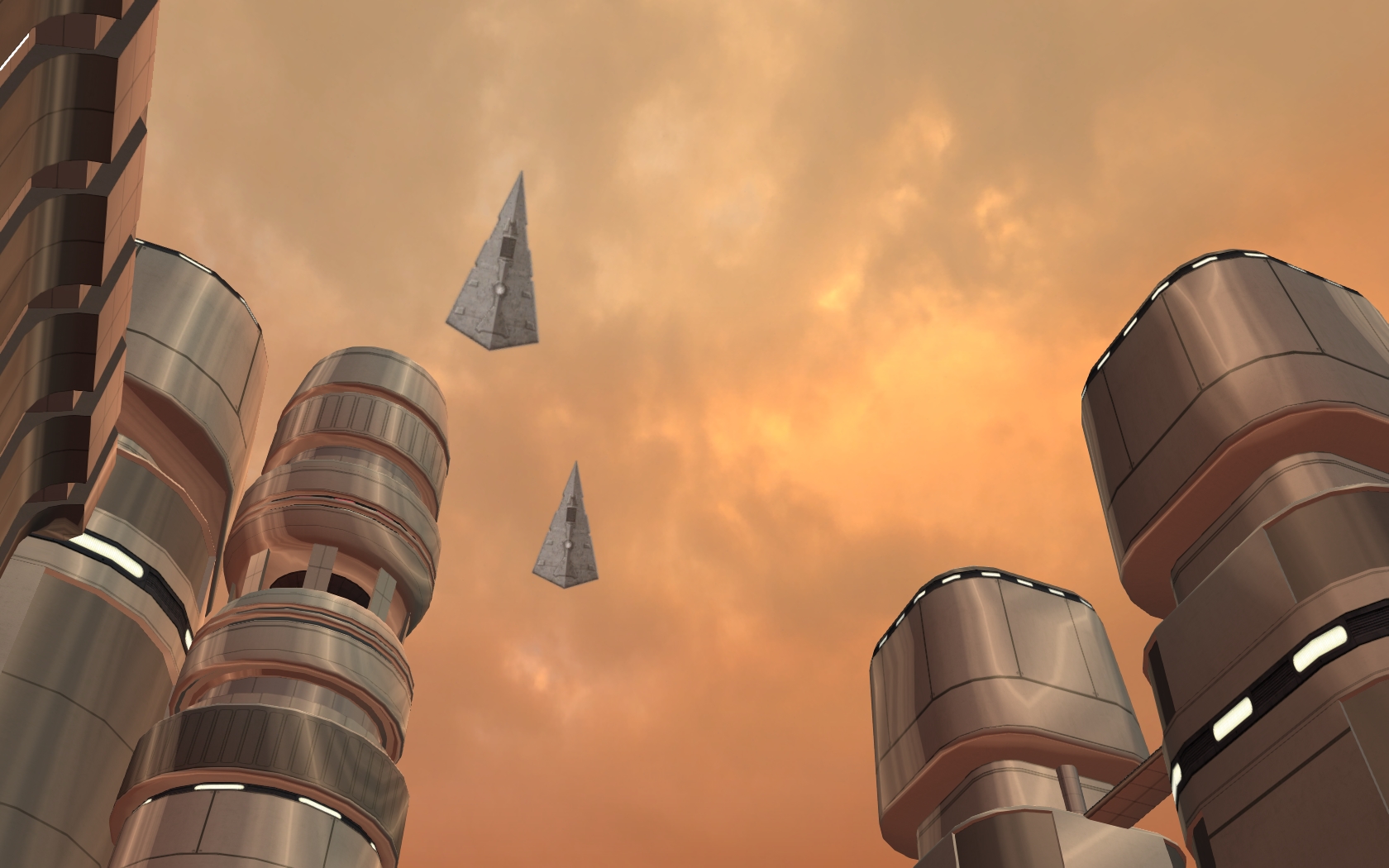 The interior is creepy as hell

And I mean this in a good way. In The Empire Strikes Back, Cloud City used special effects sparingly when it came to interior shots, leading to a weird and incredibly effective sensation of superficial civility and oppressive claustrophobia thanks to the endless white-walled corridors with no windows. A lot of that sense was lost in the retouched version of the film when George Lucas added windows back in. SWG’s take on the floating city does both, but most of the interiors are much more faithful to the original. I did find myself overwhelmed at times inside.

And when it breaks from the ominously claustrophobic motif, it’s stunning.

I also found myself slightly disturbed by how massive some of the buildings were – and how empty of NPCs. I’m not sure whether that’s for performance or effect, and it’s certainly in keeping with the original game. Fortunately, in Cloud City, it works.

It has all the requisite cool stuff

Buried among the city’s spires is a crafting guild hall with at least two (that I found, anyway!) NPCs vending crafter schematics and jewelry. And I mean really nice jewelry sets, with stats not just for crafters but for manufacturers. The new cloud car is easily the best multi-person vehicle in the game too. Gotta love new droid schems and the diner structure finally! And the PvP vendor seemed to have plenty worth buying as well. It doesn’t seem as if any playstyle is being left out here. I didn’t spot anything specific for entertainers, mind you, but it did seem as if some cantina NPCs had quests but didn’t want to talk to me – perhaps because I wasn’t an entertainer myself.

Another thing I didn’t see was a way to access housing – but I saw several apartment buildings, which seems like a big clue as to how the devs could achieve it. Housing fans will be delighted either way thanks to the craftable wall schematics! More of these please!

Likewise, hat-tip to whoever built the new cantina set, glass elevators, and science center in particular. The under-areas of the tibanna mining platforms are dramatically dark and spooky too. These spaces break up what could otherwise seem like visual monotony.

There’s a new ship too, seemingly modeled after the original yacht. I didn’t get to see the entire space mission (because I, uh, saw a button for an escape pod and had to click it, and pro tip, it works), but I saw some of it through the ship windows!

With lots of familiar faces and places! Including some people whom I did not expect to see in Cloud City. Apparently I missed a couple of books in the EU.

I love that they put a carafe of Bespin Port on Lando’s desk, too. Clever touch for the chefs in the audience. Ok, the chef. OK, it’s me. I’m the chef. 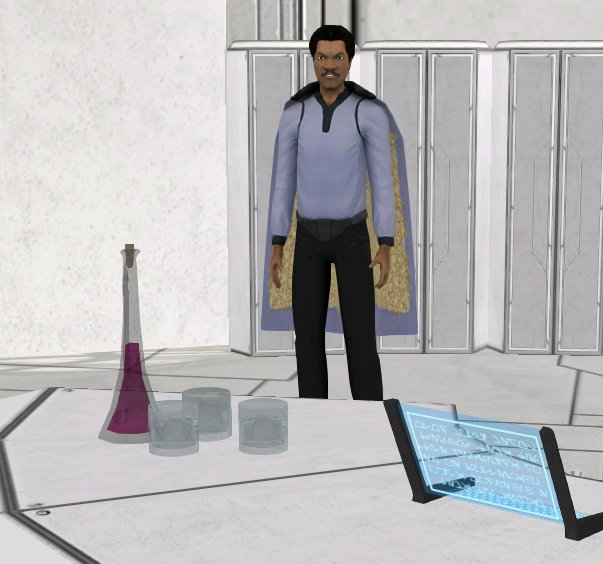 I got chills when I stumbled into a couple of these rooms and points of interest. We would be honored if you would join us.

No surprise, though – SWG always was. I may have fallen through the world a time or two, and I definitely saw some loading lag and lighting flickers. But given the scope of this and the volunteer nature of the project? No big deal. I’ve paid for many live MMOs far less polished than this. (The leaves might not have been a bug? They were animated and floating across the floor of the hospital. Very odd!)

Friends you have there

I already played SWG Legends, so I was already looking forward to this content and am hardly an unbiased source. Press were also given just two hours to explore the whole map, which meant I didn’t even touch on the questlines or peek much into the PvP areas – which might be for the best since I don’t want to spoil that content for myself anyway! But I do have to say I’m incredibly impressed with what I saw. This is a massive build that’s as good or better than any of the custom work I’ve seen in other SWG emulators, and this one pays homage to one of the best locations in sci-fi.

If you’re more the video type of MMO player, I highly recommend YouTuber Napyet’s footage of the preview too!