In this week’s edition of “why is Sam still so sad and unable to find a regular MMO to play?” I’ve decided to take a look back at a battle royale style game with fast action and quick rounds. If everyone can remember back about 10 years ago in March 2020, we got our hands on the Black Desert battle royale spinoff: Shadow Arena.

At the time I gave my take on the game, it was overall a positive experience, but I found many aspects of it to be redundant and meaningless, especially when looking at the gear system. Our resident BDO expert, Carlo, had a similar experience but tended to enjoy it more than I did. It could be because of his insight into BDO, its playstyle, and the lore behind it. Or maybe (read: absolutely) he was just better at the game than I was. Winning and being generally good at a game tends to improve one’s opinion on said game.

As it’s been the better part of a year since I’d played it and Pearl Abyss has been pumping out a ton of updates, I wanted to see what has changed in the interum and whether there is now enough to make me a more regular player.

Tons of new heroes to control

When I say there are a ton of new heroes, it’s no exaggeration. I wish I had counted up just how many the game launched (beta launch? Pre-alpha launch? Does it matter?) but there are easily at least double, if not triple, the number of playable heroes. For games like Shadow Arena that rely on heroes rather than character builds, I think this is really important.

I know I’m in the minority on this one, but I think being restricted to only a handful of select heroes always feels so boring. Even in a similar BR game like Spellbreak, players get to build their characters. Even though you are choosing within a fairly limited scope of skills and talents, it still gives you that feeling of agency and ownership of the character you’re playing. It might make balancing decisions more difficult (and since I’m a regular PvPer, balance is always on my mind), but I’d rather have custom characters with frequent balance updates than not. Because let’s be honest, balance decisions are always difficult and the result is never perfect!

For anyone who played the game back in March when I originally got my hands on it, I’d definitely recommend taking another look at it. At the time, none of the heroes really struck the right chords with me, but this time around I think I found one I really like.

Hand-in-hand with a ton of new heroes, we also have a ton of new game modes. I was seriously impressed. You don’t often see games actually trying to work outside the box that often with their PvP game modes (cough cough Guild Wars 2 cough). Typically you’ll have a couple of standard modes the developers want you to play, perhaps some shorter or unranked modes, and then maybe a practice mode. Pearl Abyss has really blown the door off the hinges with this one, though.

In addition to the original solo, we also have a trio mode (which appears to replace the duo mode), 1v1 arenas, and even a pseudo-PvE mode where players take on bots. There’s a deathmatch and champions arena too. I absolutely love this. I’ve yelled at the top of my keyboard smashing each key with as much force as I can to translate these clacks into the cloud hoping someone would be listening. I’ve always said, “Give gamers more options and let them decide what the best PvP mode for your game is.”

On top of the multiple new modes, the studio added a respectable tutorial as well. It was quite buggy for me, though, unfortunately. It was designed to be one of those tutorials where the NPC tells you to use Skill 1 to cast magic missil,e then it waits for you to do so before moving to the next step. However, instead of waiting on my skill activation, sometimes it just moved on to the next step. Other times it looked as if multiple steps were being displayed on screen at the same time. It was weird. It had a bunch of trivial steps, such as telling you how to use WASD, but there were many useful ones as well. Overall, it currently comes in at a C- for me. Passable, but just barely.

I actually really enjoyed the PvE mode. It is sort of a nice, laid back version of the standard BR mode. You run around killing mobs, picking up loot, and occasionally fighting a player or a bot. The difference in this case between a bot and a normal mob you’d fight is that the bot isn’t a demon-looking monster (maybe Carlo can help me out with what they’re called!). Instead, it looks a lot like a player and will fight like one of the heroes with more skills and being overall more deadly. It’s actually a great introduction mode for new players. 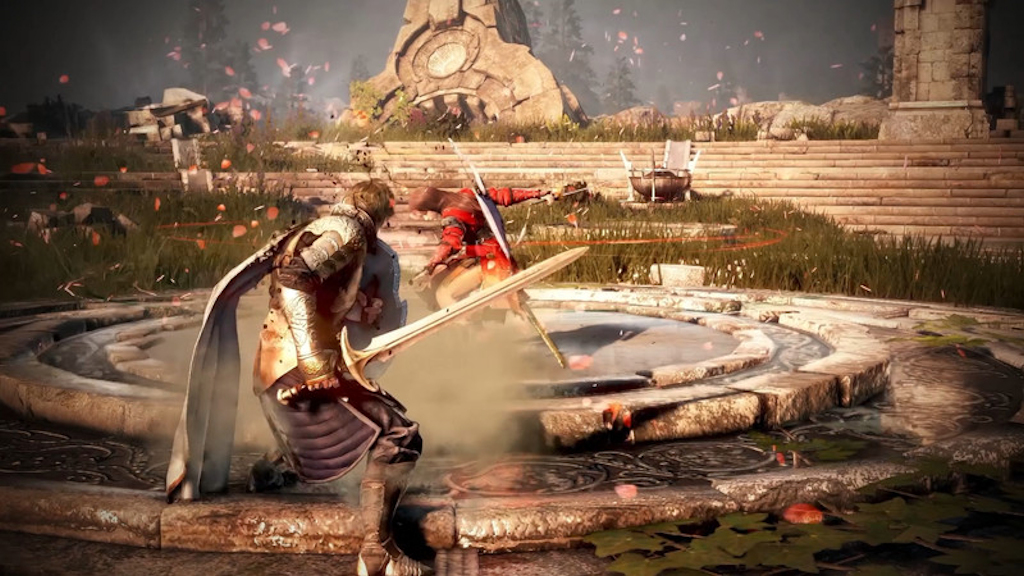 But there’s hardly a soul in sight

After playing through the new tutorial, the first thing I tried to do was play a round of 1v1. What better way to test what you learned in a tutorial than to get smacked around against someone who probably knows their hero inside and out, right?

Well, unfortunately for me (or maybe fortunately), no one ever showed up. The game’s population hasn’t been super healthy.

I waited around for maybe five minutes in the arena hoping another player would join, but no one did. I’m simply not the type to wait for over five minutes for a queue to pop, so I left. Maybe 1v1 is too intense of a game mode and it scares players away. So, I decided I’d try to play a round with a team of three. I joined a queue and waited for it to randomly assign me some friends. Once again, I waited around five minutes, and I never had a player join my team. To say I was becoming discouraged was probably an understatement. I suppose it’s great to have a ton of game modes – but not so great if no one is playing them.

I’m not so sure what a great solution for this case would be. I don’t love shuttering a game mode – there are certainly some players that love it and would hate to lose it. At the same time, you don’t want players to have a negative experience with it like I did either. One thing I might try is to give players some additional information. Maybe a count of the number of other players currently queued for each mode or possibly an hourly average so players have a rough idea of the queue size but not the precise number. Another option would be to give players the average queue time before the teams fill up. While none of those options might be perfect, they are certainly better than sitting in a queue not knowing whether you’re the only breathing being waiting to play or are just on the cusp of joining a game.

That’s been my experience popping back into Shadow Arena for a bit. There were plenty of good (new heroes and modes), but if there’s no one to play them, it doesn’t bode well. Has anyone else out there tried to peek into Shadow Arena lately? Was your experience the same as mine, or do you have a vastly different take on the state of the game? Let me know!

To be perfectly honest, Pearl Abyss got greedy when they separate Shadow Arena from Black Desert Online.

Player’s interest in Shadow Arena was greatly hyped due to that when you complete a Round/Game, it will give rewards that adds to your Black Desert Online Progression.

Removing Shadow Arena from Black Desert Online was the start of its downfall.

Battle Royale modes are brittle and can only work at some point.

Any of you heard about Hunter’s Arena Legends? Yea, I bet you dont.

You could consolidate all the game modes into one, it’s not going to help if there’s peak player count of 40.

Shadow Arena was doomed to fail and there’s no solution to it. The combat relies on the same model as Black Desert which outside of the crazy good internet of South Korea is total and complete dogshit most of the time. It desyncs like crazy and many cases the DPS of classes is entirely reliant on your FPS or you actually lose damage. These are truths that any Black Desert player knows, and all the content creators they invited for Shadow Arena told them, but they as usual they ignored the NA/EU audience and pressed forward anyways cause it worked fine in Korea.

The game should have never been split off from Black Desert and all the costs of investing in the game should have been instead invested into creating better GM tools and handling hackers/cheaters in Black Desert (which is why they split off the mode in the first place). Instead they have this boondoggle and think they can just throw development at the problem and have it work like it does with Black Desert.

You’re probably right on a lot of counts. Although I do think there is some good in there. I’m not a BDO player but maybe it should be brought back into the main game.

There is certainly some cool modes and fun to be had. Plus if it were part of a real MMO and I could play my character in these modes, that’d be pretty slick.

Well even in the MMO BDO version of the game you couldn’t play your character in there. Instead you’d spawn as a black spirit and instead find the hero you wanted and control them instead. What was nice however was it was an alternative way to play BDO because if you wanted to go PvP you could get a reasonably fair PvP experience in there without facing down people who have been playing 8-16 hours a day since game launch and just have an immense economic/time advantage over you in PvP and still be competitive.

Really they can’t bring it back though because they never addressed the issues why they took it out in the first place, all the hacking that was going on.