Yes. Yes, that happened. I absolutely am an idiot.

END_OF_DOCUMENT_TOKEN_TO_BE_REPLACED
This week in CMA saw me rambling onward in ArcheAge with a fresh set of skills and a whole bunch of exclamation marks leading me along as I climbed the levels. The chosen secondary skillset was Auramancy, and I have to say that this was a fabulous selection. I’m not sure what the skillset’s description of manipulating space and time is on about — maybe those skills come later — but what I do know is that, as of this writing, I can now lay down this big giant trail of hurt before flinging my Malediction missiles at foes, I have something of a little shield, and best of all I can summon a magical snake that creeps up on a target and unloads hell on someone.

In short, this combination is awesome. 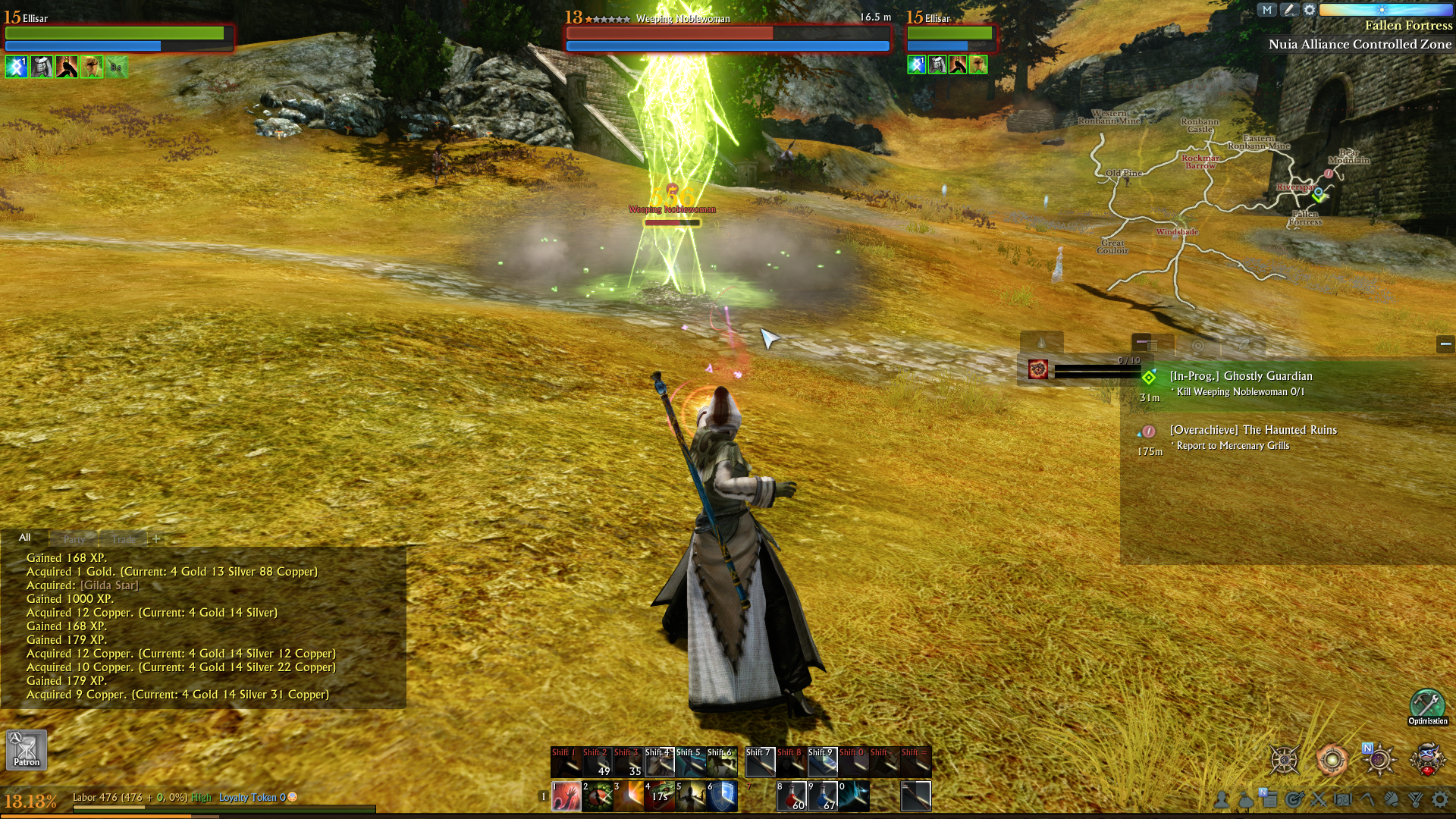 But I’m getting a bit ahead of myself here. As I said, I continued to merrily jaunt my way through the woods and into a more open grassland area, picking up quests as I went along. This was perfectly serviceable up until a point where I had no more breadcrumbs to follow, giving me pause for a moment. Was this where the handholding ends? Was I meant to make my way on my own after this point? Was I missing something?

I started to suspect that was the case when I was facing off enemies that probably shouldn’t have been a challenge and I was falling over dead or barely scraping by the encounters. It was at this point I realized that I was still wearing my starter garb.

Years of themepark MMORPG conditioning had me thinking that I was supposed to have gotten some equipment rewards, so I searched my inventory to see if I had some item drop that I otherwise hadn’t noticed. I didn’t, but I did have this potion that let me select one of several different buffs. I elected to go with magical attack, which basically made me… well, not chug-to-win, but chug to stop sucking so much. 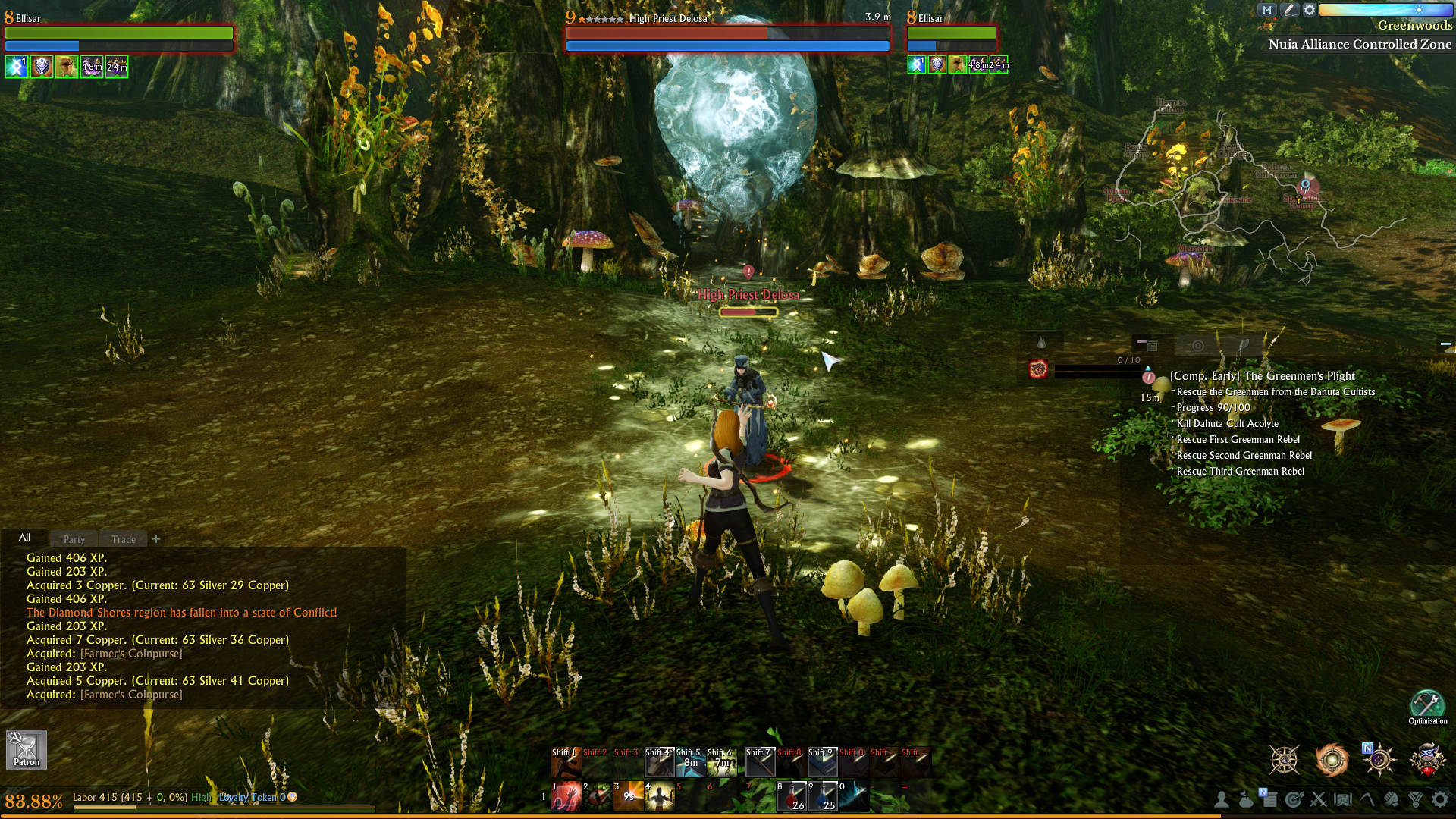 With the search for random loot in my inventory proving fruitless, I then opted to backtrack a bit to see if perhaps there was an equipment merchant I had walked by. When that didn’t turn out anything, I decided to stubbornly move onward, hoping that maybe some more quests would appear that would give me goodies. Along the way, I found what I’m pretty certain were some player-owned houses that were scattered about, including some cute little mushroom houses and a somewhat unnerving platform full of a wide variety of truly creepy toys. Player creativity at its finest.

Finally, I had the bright idea to open my quest journal to see if there was something I had skipped over. That’s when I found out that there are racial quests. And I had a sneaking suspicion that those racial quests were at the very beginning of where I started from, so I hopped on my purple elk and rode the trail all the way back to the start to confirm my suspicion.

Sure enough, there was a quest NPC waiting for me. So yes, in fact, it did turn out that I was missing something. My idiocy did have the side benefit of making one of the NPC’s dialogue hit a bit different and more hilariously at least. “Best and brightest” indeed. 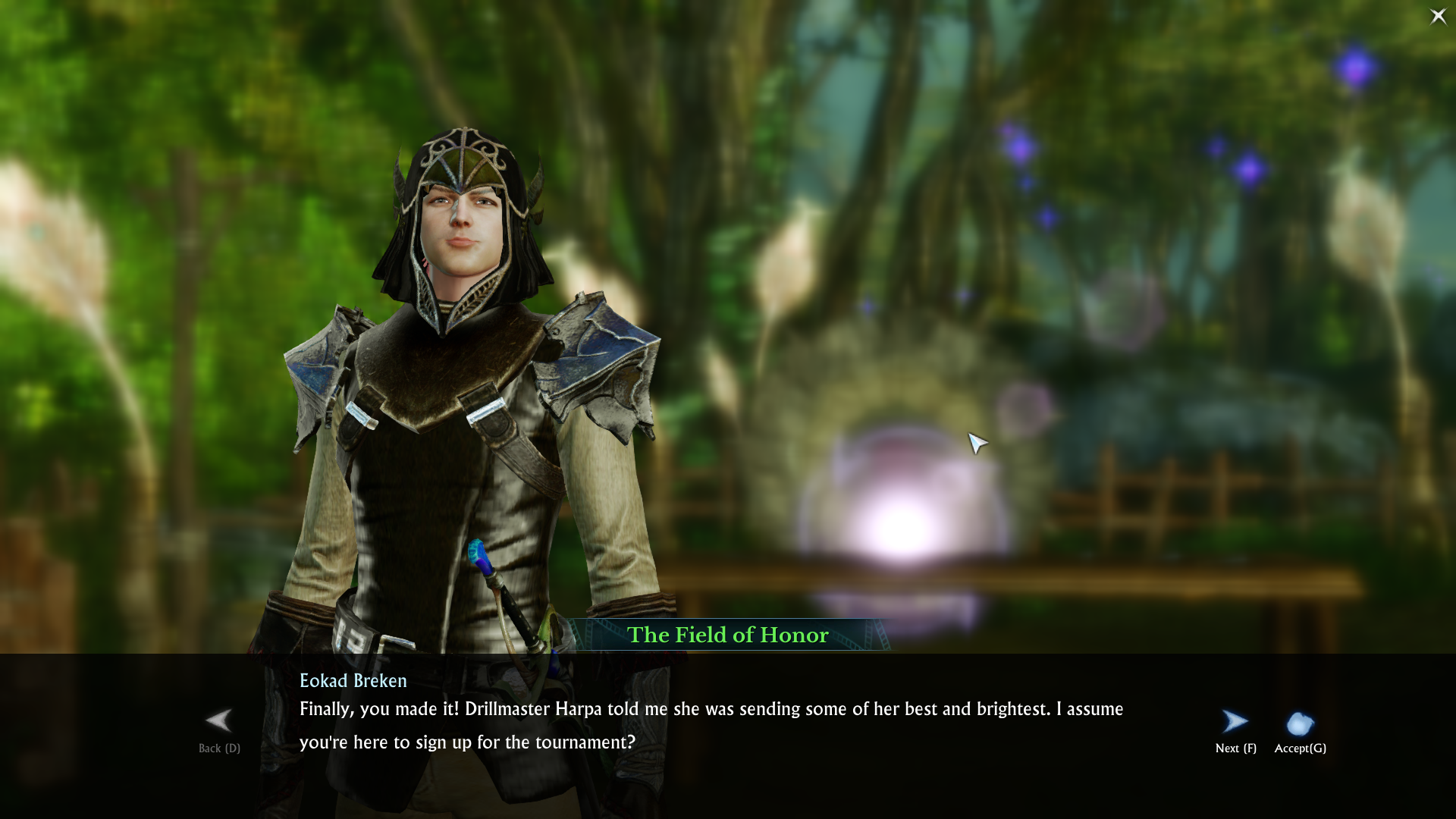 As expected, these quests were the ones that got me into some much more improved gear. They also began to weave far more of an interesting narrative that involved my character tapping into the shared memories of the Elves’ fallen monarch, a ritual battle that turned into something of a small international incident, and the unraveling of the backstory for the Elven people. It wasn’t what I’d call particularly riveting stuff, but it was certainly intriguing. I just wish it wasn’t being told through narration paired with low-res still pictures of art.

In spite of my detour of stupidity, things have otherwise operated rather optimally. This is very much your run-of-the-mill, breadcrumb trail-following, themepark MMORPG experience. Only now I get to unleash snake hell on foes and look pretty neat doing it. Also, I have a glider now, so that’s fun.

It’s overall a pleasant experience to this point. I’m not really seeing the consternation that ArcheAge is getting in general. Perhaps it’s because I’m still very low level and there are stumbling blocks for those in the late game or endgame, but up to now, this is just a middling, routine, but generally pretty and enjoyable romp. 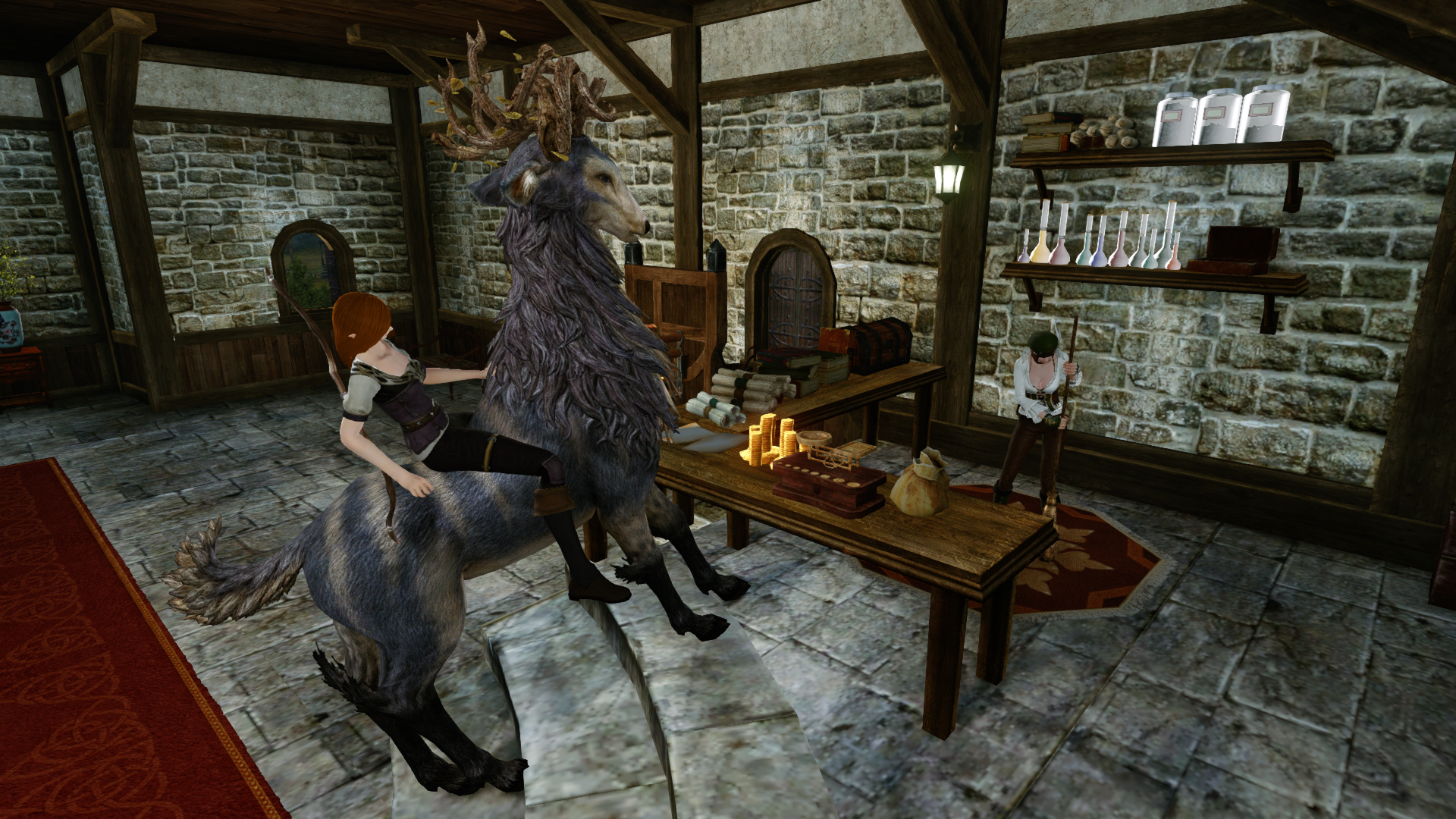 Unfortunately, the very on-the-rails sort of nature of things means that, once again this week, I’m left with a single poll question. Sorry about this, friends.

I’ve hit level 15 and that once more opens up some skillset choices. Additionally, the options that are highlighted appear to be the ones that are the best fit. So with that in mind, the poll for this week is also a rehash of the previous week’s poll as it turns out, just with one less choice.

So, to review, we’ve got a weak poll that has one less option than the last time and my dumb ass effectively had to start from the beginning because I was too thick to pick up the main quests. Good times.

What should be the next skillset I select? 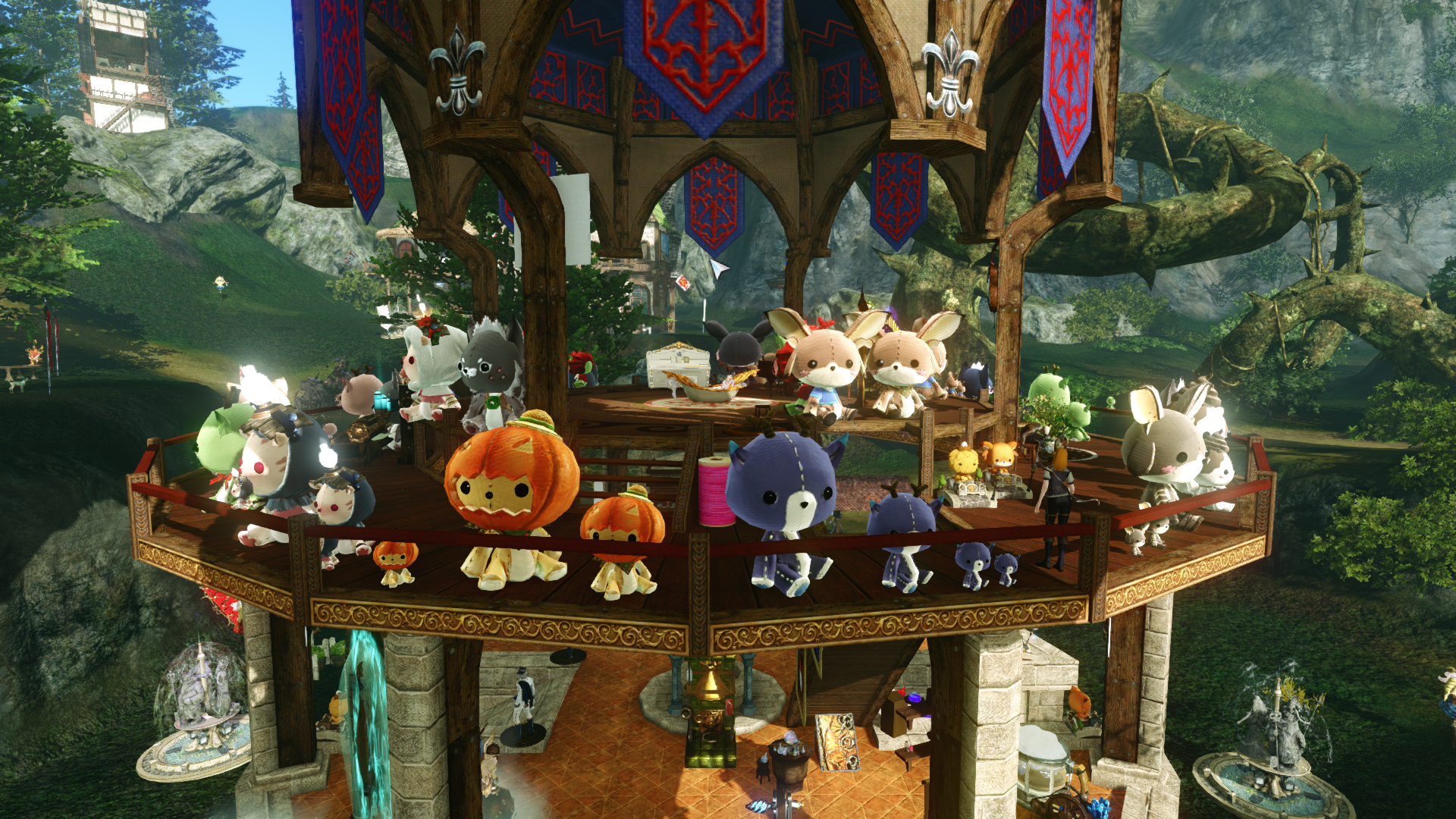 As usual, this week’s poll will close at 1:00 p.m. EST on Friday, January 15th. Until then, I’m going to do some research on what else there is to do so next week’s poll won’t end up being even more boring. Or I’ll have something to actually make a poll about. I’m open to suggestions in the comments if anyone who plays the game is willing to provide.

Thanks again. And sorry for the dumb.