I have to admit, from the demo, Monster Hunter Rise isn’t what I was expecting. Having played Monster Hunter World on both PS4 and on PC, as well as having cross-culture experience with the series, I have certain expectations. I’m not saying I’m the best at the game, nor the most engaged, just that I have broad experience on this topic.

So when I first played MHW on PS4, I felt like Capcom had really created something special. I’ll still argue that MHW on PS4 is the most accessible, most intuitive, and perhaps the most social Monster Hunter game ever released. Rise thus far feels like a step back in terms of accessibility, but a step forward in, as our own Chris “Wolfy” Neal put it, “adding a little more skill ceiling” to the series. 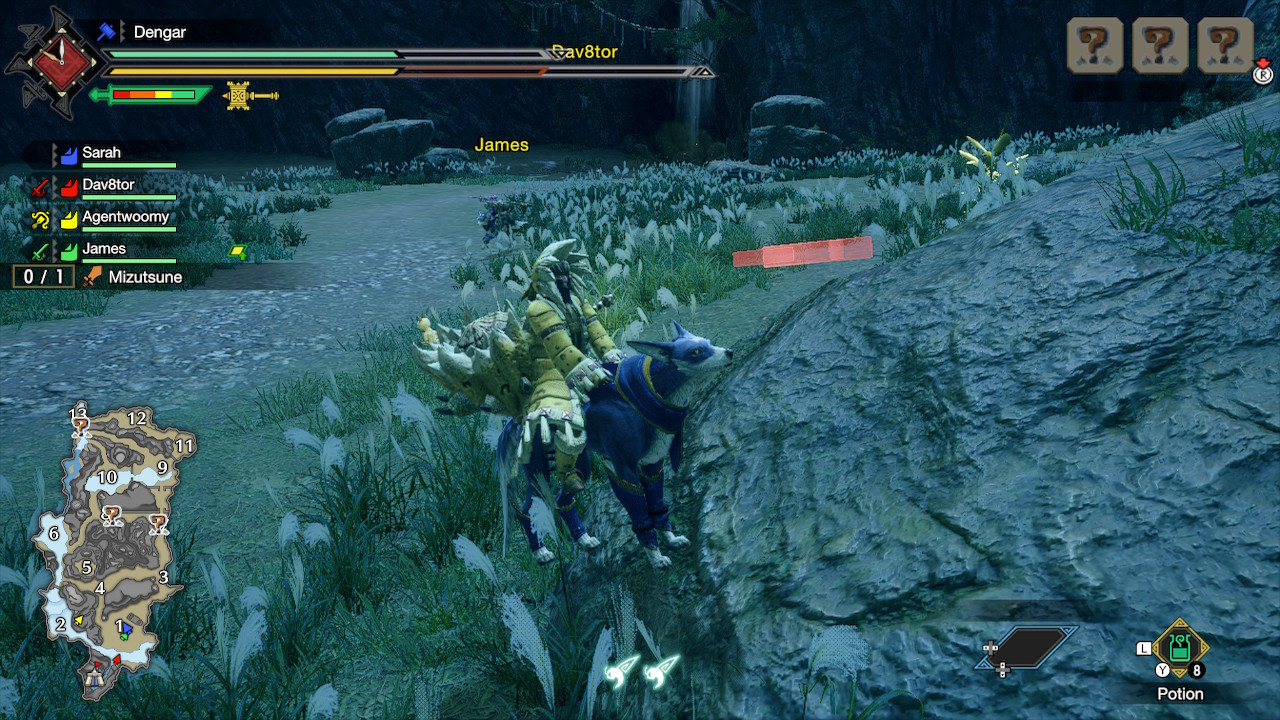 I know I don’t usually say much about graphics, but almost immediately when I started up the game I noticed the graphics on offer here. World certainly spoiled me. The grass art feels like merely a fuller version of what we had in Monster Hunter 4 for the Nintendo 3DS. The environmental colors are quite drab, though I saw a few lesser creatures with some nice coloring. Overall, though, the visuals made me feel as if I was trying an older game when playing on my TV screen. Admittedly, playing in the handheld mode invoked a sense of nostalgia, but I feel like that once again brings up the comparison to MH4, which wasn’t a bad game, but that’s hardly a compliment after what we got from MHW.

It’s not just the graphics that are dated; it’s also the design choices. While harvestables are obvious (monster parts glaringly so, looking almost like flares), control pop-ups are awkward. For example, while going through my inventory, I kept getting a pop-up about how to use items. I received this pop-up not just while scrolling but using items. I’m still unsure as to why the pop-up occurred and why following this did not cause it to disappear, but that was that. On the other-hand, using the wirebug, one of the game’s newest features, created just one pop-up. I went through the tutorial to help get me through all the new additions at least once, but there’s so very, very much to learn that proper pop-ups would really be helpful.

The game also did away with the scout flies, which helped bring the player’s attention to useable environmental affects as well as pointed out where the monster you were tracking is. Instead, Rise just uses a big, immersion-shattering arrow.

While we did get some new features, one that I really miss is * mounting. We’ve gone from combat-while-mounted to mounted combat. The former was key when you could use an arial attack to get ontop of a monster to attack it. This could be especially useful for tail cutters like me, as we could safely unload a barrage of targetted damage to ensure breaks. It was also pretty cool.

The new Wyvern Riding mechanic is… not that. While there are creatures that can help make mounting easier, the only way to usually get to this state is to wear down a monster until the game signals that you can mount the creature. At this point, you can force it to move, use weak or strong attacks, launch it at a wall to deal damage to your mount (and a creature if you hit it), or unleash a special attack.

While it sounds cool in theory, it’s actually quite rough. In terms of realism, it makes sense, as the creature is trying to throw you off. However, you’re basically using special insect silk to make creatures into a virtual puppet. It’s odd to say the least, and it’s part of that new skill ceiling Chris hinted at in our discussions on the game.

In fact, I’d argue many of the new adjustments come from the wirebug. MHW‘s clutch claw had a bit of adjustment needed as well, but I felt that players received plenty of hints on how to use it, both in terms of UI (pop-ups, glows, hints to use it) and intuitiveness (seeing a branch and trying to swing from it). Maybe we’ll see more of this in the full game, but aside from the single pop-up I previously mentioned, I felt like most of what I learned about the wire-bug came from the tutorial. MH games are notoriously difficult, but I often overestimate my skills as a veteran.

While I’m often amazed at how my fingers know when to dodge and barely get me out of harm’s way when I’ve encountered a brand-new monster, the wire-bug initially made me feel as if I was trying to control a greased brick. Normal running and dodging is what one might expect, but then the wire-bug movement suddenly makes me feel as if my character’s been kicked forward on ice. The movement is slick, but not really in a good way.

Chris suggested to me that things like the wire-bug will eventually become intuitive to players, and I agree to an extent. While I may overshoot my target still, I’m still zipping in-and-out of range. It vaguely reminds me of the Attack on Titan’s 3-D maneuvering gear in the way I use it, especially to recover from knockdown attacks or get out of monster’s combos. The thing is, I have seen plenty of people fail to use it, most notably in the demo’s intermediate monster battle, mizutsune. 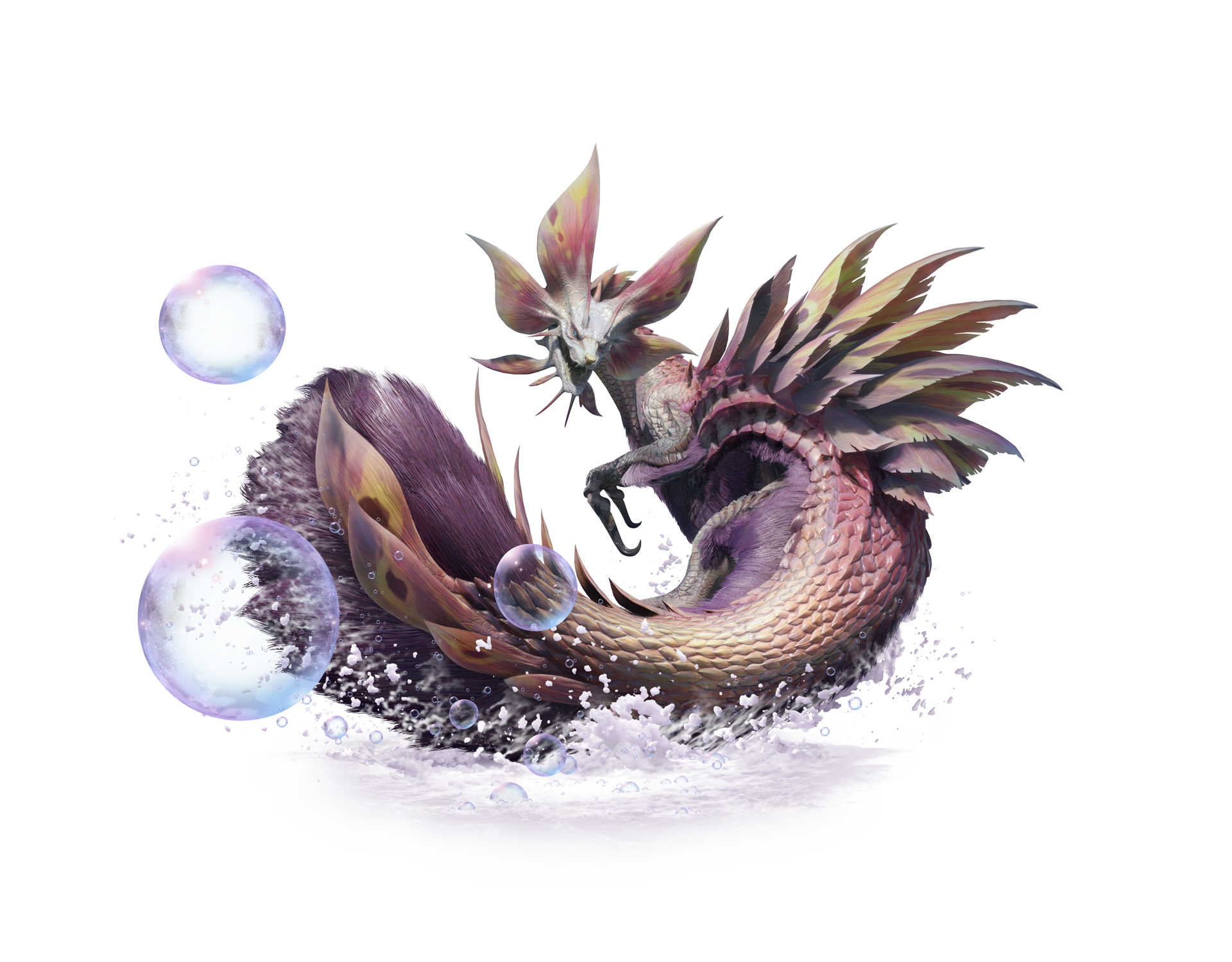 The monster is constantly throwing out bubbles in all directions and heights and will combine that with a kind of high-blast water attack. While you may not need to use the wire-bug in the battle, it certainly seems to speed things up, which is important because hunts once again last 50 minutes max before auto-failing you. I often suspect I can tell how new a player is by how she uses the wire bug to battle mizutsune. Not using it is a sign of newness, over and under launching suggests a learner (that’s me!), and then there are the people who are all over the battlefield, clearly masters.

To note, the creature isn’t new to the series, so hardcore veterans should have some exposure to it, though I admit I skipped the game it appeared in. That being said, I’ve seen a few discussions about its changes, and one of the things people have noted is that players may just not be used to the wire-bug. With its speed, various height attacks, 360(+?) hose attack, and more, the mizutsune encounter does seem like a skill check.

And sadly, it’s one I already see English speaking fans failing at. Nearly all of my group play has been to hunt the beast. No one seems interested in the beginner hunt. The players mostly seem like veterans too, as I’ve been with many that took out veteran monster rathian with few issues, even demonstrating that they could use lifepowder to heal the group.

While I’m no master hunter, I did solo mizutsune so I could learn the basics and was able to sever its tail and break its head. I also learned about its bubble blight effect, which makes your character’s movement feel even more slippery than when you’re trying to master the wire-bug. So the fact that nearly all of my groups failed was disheartening. Admittedly, the demo’s a new game and people are still learning.

In my frustration, I also (wrongly) wondered if perhaps the Nintendo Switch audience attracts a more casual player. But nope. The game allows you to choose to group with players from your language group or any language. Communication in the demo is restricted mostly to “stamps” (visual) and phrases (pre-set), and the default is your language group. The very first time I switched it off, I was grouped with several Japanese players. They were not perfect (someone nearly got blown up with a barrel bomb and a trap got wasted), but the kill was clean.

Obviously, I’m not arguing that Japanese people innately are better at the game. The series is just bigger in Japan, and thus people are more familiar with the series. It also helps that, as I noted previously, Japanese players in MHW favored groups, while even our own readers admitted there were times they’d just solo because of the lack of common MH etiquette among western fans.

And that was why I felt my non-English speaking groups did better. For newcomers: Hammer users (and other blunt weapons) stand at the front because they can “dizzy” monsters for a bit by whacking their heads. Long, sharp weapons hit the tail most of the time because they can sever it. These two roles aren’t interchangeable (switch-axes can’t “dizzy” a monster and hammers can’t cut tails). Western players I met didn’t follow this rule, among others (like using wide-spreading attacks that can knock-over your fellow hunters). While it can be fun to experiment with ideas, given that the demo is limited to 30 group quest attempts online, maybe try thinking about working together. 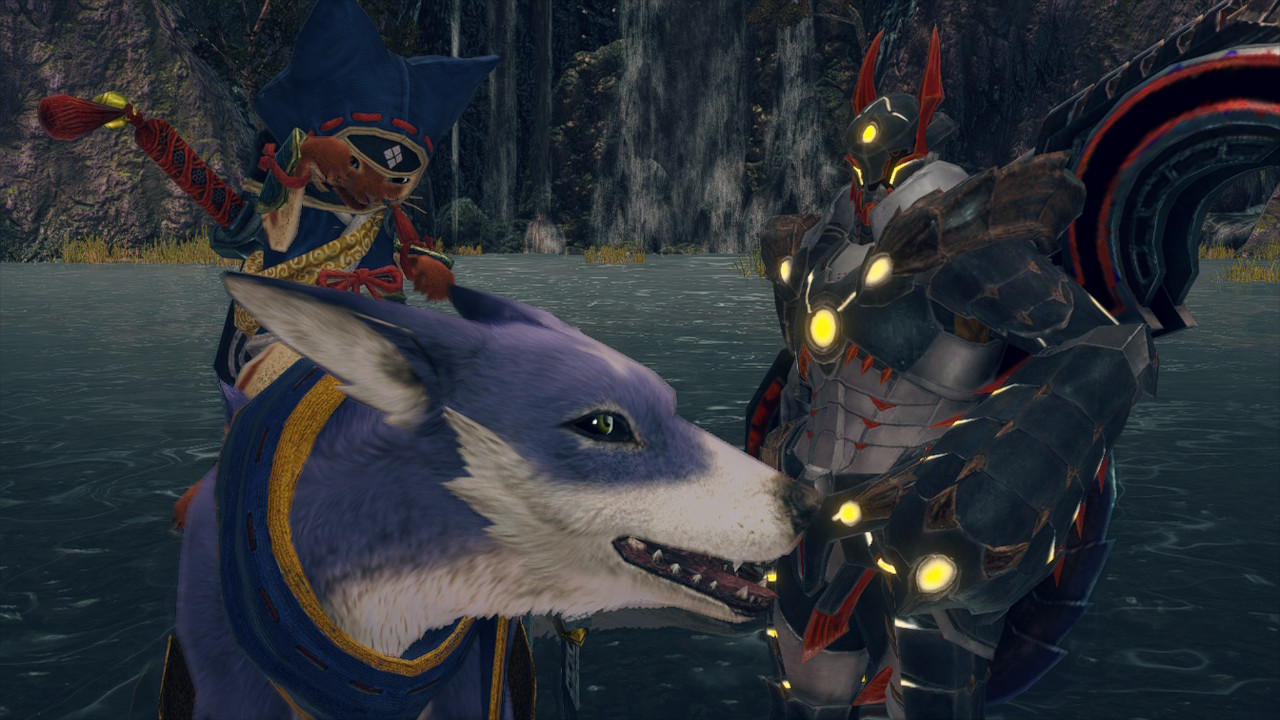 I do want to end on a positive feature though: the palamute. The MH series has long been obsessed with cats. Our dog companions, while unable to grant us support such as heals the palico cats can, still attack, but they also act as mounts. They function so intuitively and so seamlessly that I honestly wish mounts in other games were more like them. They attack with you, emote with you, allow you to mount them while you’re running, follow you, and allow you to leap from them to start an airborne attack.

In all, the Monster Hunter Rise demo makes the next MH series entry feel as if it’s aimed more at veteran hunters than trying to welcome new players, but it’s not all bad. It’s a good reminder that the series does tend to have a bit of a learning curve, but already it seems that the game rewards those who invest in it.

*2/6 Update: I misspoke about mounting being a series staple. I was lumping in encounters like Tri‘s Jhen Moran encounter. As for much of the other “criticism”/stanning in the comment section, I’ll personally leave it, but I also know many of it comes from 4chan users proving my point about the negative aspects of the western community.

Tower of Fantasy opens up for pre-loading today, will toss so...