You’d think it would be mentally exhausting to be a Klingon, what with waking up every morning fully expecting to die and looking for every possible opportunity to throw yourself into the jaws of the Grim Reaper (or whatever the Klingon equivalent is). I’d say that Hikari settled on a good solution here in Star Trek Online, what with trying to take on a Bird of Pray with a ground party during the remastered tutorial.

Our screenshot challenge last week was to go spelunking in caves and other subterranian spaces, and reader Daniel sent in this striking Guild Wars 2 picture in response.

“This was in Tangled Depths,” Daniel wrote. “The entire zone is underground, other than Frog Town (not pictured).” 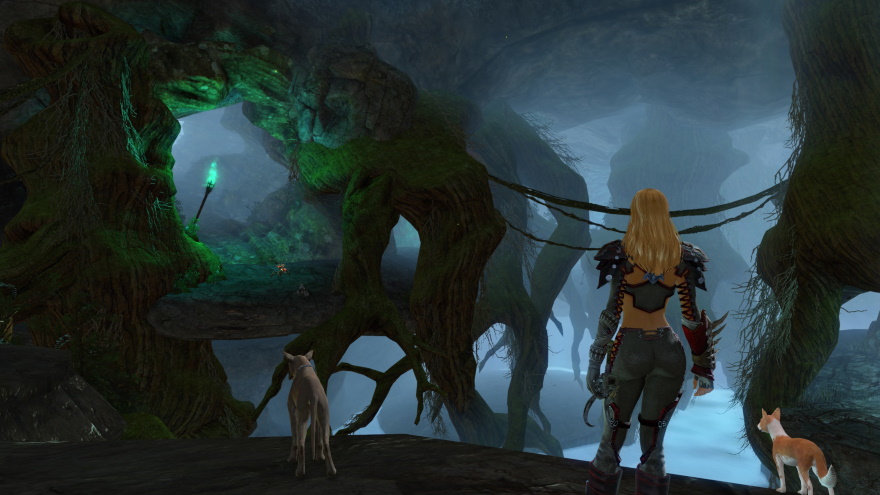 Meanwhile, Captain Minimalistway is contemplating how long paper lasts in frigid water before losing its buoyancy. Six minutes? Depends if it has a waterproof coat of wax.

“Here I am sailing on the Arcane river in MapleStory with a paper boat,” Minimalistway said. “I think this place is beautiful.” 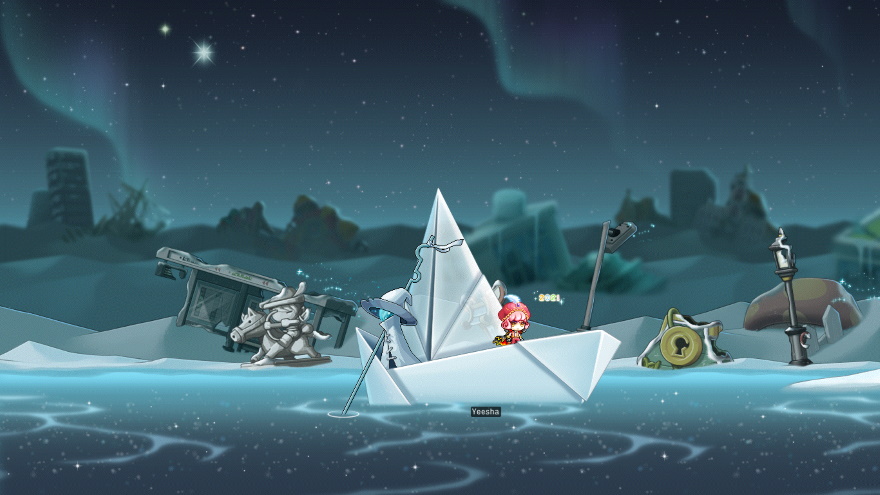 And here’s another lovely starry night shot, this time in Genshin Impact. Little Bugbear wanted to show off “cool guy Kaeya.” He’s got an eyepatch, so you know he’s a tortured — but relatable! — soul who is simply misunderstood and needs the comforting embrace of many lovers. 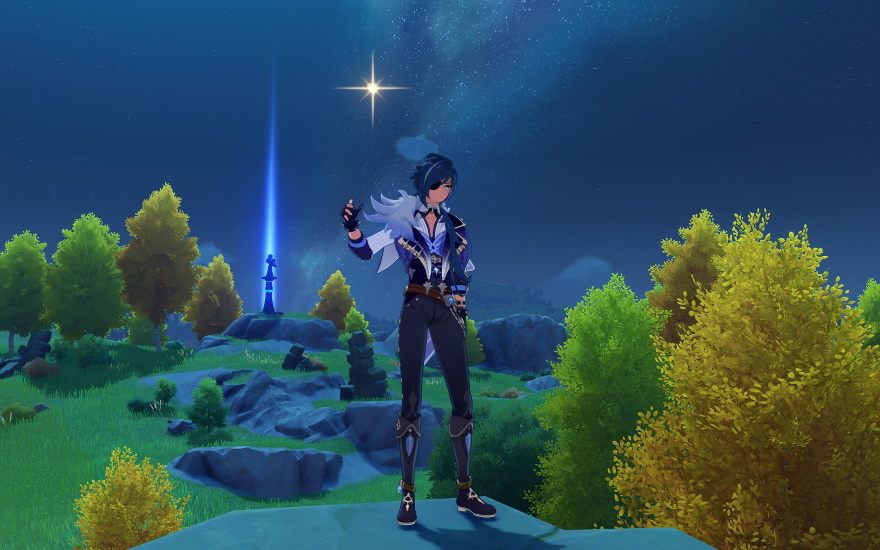 We’ll head back underground with Katriana here in Lord of the Rings Online: “This picture here is from a cave in (I think) Southern Mirkwood. There are these worm things that have made these shimmering curtains of goo that are very pretty, though very disgusting if you think about what they are.” 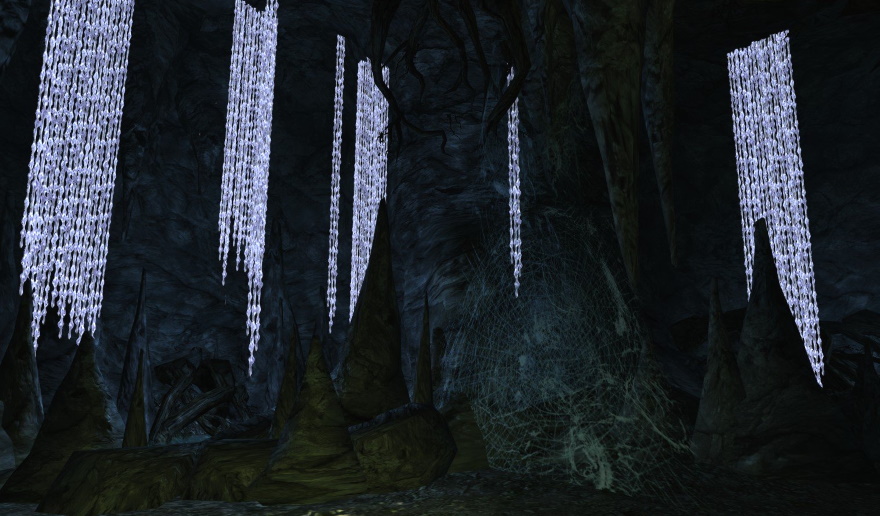 That’s it for this week’s selection, but the fun continues in the comments! Post whatever you want, or if you’re looking for direction with a screenshot challenge, submit a picture of life surviving even amid a winter scene.

Here’s Talyia in an alpine meadow on MicroTech with a stuffed Pico the Snowboarding Penguin. Some flowers manage to bloom, even if it is cold enough to frost over the armor.

A few minutes before I shot that, all we’d have seen was snow and mist – then the storm decided to move on – although I did have to put Pico up against that rock to keep him from tumbling away…

If there’s no lava it’s not a proper MMO

Last week i played Blade & Soul, the game is fun to explore and i would like to go back one day to keep exploring, i didn’t reach any snowy zone so no winter scene here.

You won’t get into the snowy zones until well into the Silverfrost Mountains arc of things, which follows Moonwater Plains and Cinderlands ones respectively. It appears you are still only in the Viridian Coast arc though…thus you have a long and complicated way to go before getting there. Sorry. >.<

…but I do hope you can stick around till then. In many ways it's very much worth it, IMO.

In the meantime though, feel free to drop me an ingame line at Utakata Hanabi, Otogi Juushi, Ichigo Hina or Mars Gunnm. And the pigtails will see about arranging you a Friend's List invitation…in case you have further questions, in need of help or just want to hang out. /bows

Thank you, i moved to other games, that’s why i said that i would like to come back one day, i want to come back later, i still want to see the world and the story.

As it happens, yesterday I returned to the Misty Mountains in LotRO for the first time in… probably a decade. I was playing on my Hobbit Guardian, who I’d left in the mid-30s (using the XP-blocking Stone of the Turtle) for over a year, so I could take my time enjoying the beauty of Evendim and Trollshaws.

I don’t know if SSG did a visual revamp of Misty Mountains at some point, or if it’s just a product of me having a much better computer now, but everything looks a lot better than I recall.

Content-wise, it still feels like a “flyover” zone, with a few points of interest nestled in the corners of wide, flat snowfields dotted with random spawns. It’s definitely not on par with their work on Forochel, or later snow zones.

Anyway, here are some landscapes. :)

LotRO is still so, so pretty. Especially the first and third pictures are just incredible.

Greetings from Clock Work City, can’t do a weather picture because there’s no winter here, but I suppose I’m one of the few examples of life surviving somewhere that’s completely constructed.

All great shots, but that first one…yowza!

I’m back. The need for a story-driven MMO that is very solo-friendly was staring me in the face all the time. And as I’ve not played for a good few years I have to learn everything again. So it’s new but very familiar.

A few shots from the last stretches of leveling my warlock (the ending of Night Fae story campaign is truly epic, the only one that didn’t make me yawn in Shadowlands). Now I’m off to enjoy the struggle of relearning the new, old spec of destruction (leveled as affliction). Fun times– for a change, until it’s time to hit Torghast again.

No one messes with Lady Moonberry, she will bust you up.

“When day comes, we ask ourselves where can we find light in this never-ending shade?” – Amanda Gorman

Or flying high in the clouds on a dragon built for 1.

The Icebrood Saga spends quite a bit of time in the not-at-all snowy Eye of the North.

As for the odds of surviving that fight; the ship is mine and the ground team belongs to the former Warden of Rura Penthe.