Have you really had a good, long, hard think about what your Shroud of the Avatar public cache chest says about your player-owned town or property? Do you think that just having some basic-looking treasure chest exudes the right sense of style you want to project? According to this week’s Avatar Update, you’ll be getting options when new types of public chests arrive.

Just envision how you’ll set the right spooky mood with three “immersive” varieties of corpse/coffin containers, one of which can be crafted. Perhaps subtlety is more your thing when it comes to hiding treasures in player-made treasure hunting ventures, in which case the smaller public caches are right up your alley. Or maybe you’d rather show off a bit with some fancy premium varieties form the Crown Store, which will feature larger storage space and ornate or special qualities.

So many public chests. So many possibilities. And they’re coming as early as January 28th when Release 28 goes live as SOTA does the vital work of “[improving] the overall guild, player quest, and inventory sharing experiences throughout the community.” Which is an actual thing that was typed in this newsletter.

The articles are getting more and more sarcastic, deservedly so. These “updates” are so bad that even Chris Spears himself has stopped showing up in the comments to defend them, as has the usual group of players (i.e. real-money sellers).

If you’ve scraped the bottom out of the barrel, sell it as upgrades!

Neat I guess, and of course it’s a MTX outside of the corpse/coffin ones.

Jesus, they’re still hawking those $8K bundles to go eat with Garriot? But real…what the heck is this even? Because it’s technically a trident…but like…what? 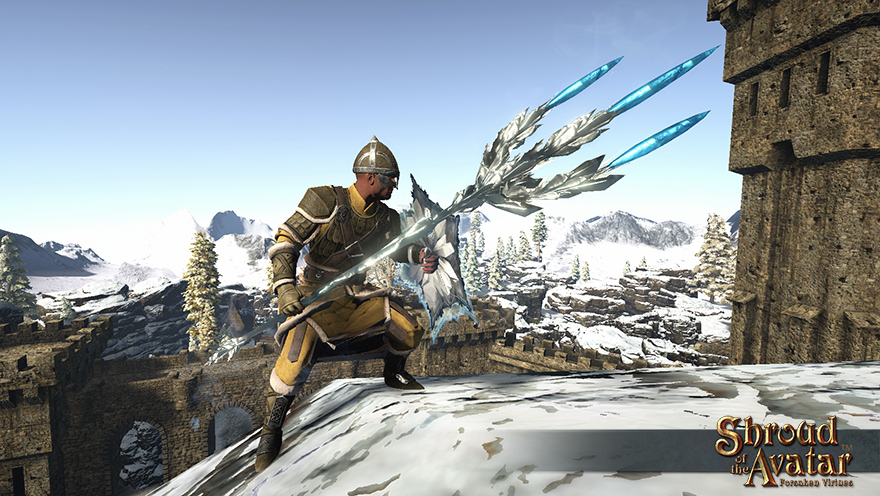 The “Fine dinner and drinks with Lord British, Darkstarr, & Atos at a location TBD in Austin or NYC” will be delivered in the same way as the game itself – a zoom call with Lord Brexit’s World-Famous Mac & Cheese Recipe!

There’s also the “One real silver ring crafted personally by Lord British” which someone’s found a sneak peek of.

Oh, and the house thingy has already been revealed here on MOP.

I’m hopeful that someone involved with the SeedInvest campaign talks to MOP (or someone) and we figure out what the hell is going on with this game behind the scenes. If there is I doubt it’s some intentional and nefarious plot, but the funding/support for this game has been…odd.

Wasn’t Garriot like, using a robot to pal around in the office for a bit? Is he still doing that or did he jettison himself completely outside of maybe a dinner here and there?

RG hasn’t been seen on the forums since Oct 23, when he gave his biggest contribution in years of his World-Famous Mac & Cheese Recipe (what I linked above). He occasionally shows up on the livestreams to read names but little else.

MOP usually has an info box attached to their articles about SotA to explain more, as seen in this article.

The SeedInvest campaign was another scam, with nothing given back to them, no reports, and Portalarium no longer has rights to do business in Texas as that has lapsed. SotA was sold to Catnip Games, run out of Chris Spears’ living room with a scant handful of remote contractors. They are basically able to do… well, this article sums up what they’re able to do while Chris busies himself with fiddling with combat while the rest of the game burns.

But to get an idea of how screwed this game’s development has been, that info box is a good start down the rabbit hole of rabbit holes.