The announcement of Splatoon 3 has actually shown me that I know more Splat fans than I thought I did. Like, people who are still playing despite the lack of updates. Not that the game isn’t fun. I jumped back in myself after the announcement to get a reminder of what Splatoon 2 added to the series, as I played the first one much more, mostly due to some lifestyle changes. Splatoon 2 actually added a good amount to the first game, so I’m hoping to see the same from Splat 3.

While Nintendo’s Twitter tweeted out some additional info, I can think of 10 features I’d love to see in a threequel. Some may even have been hinted at! 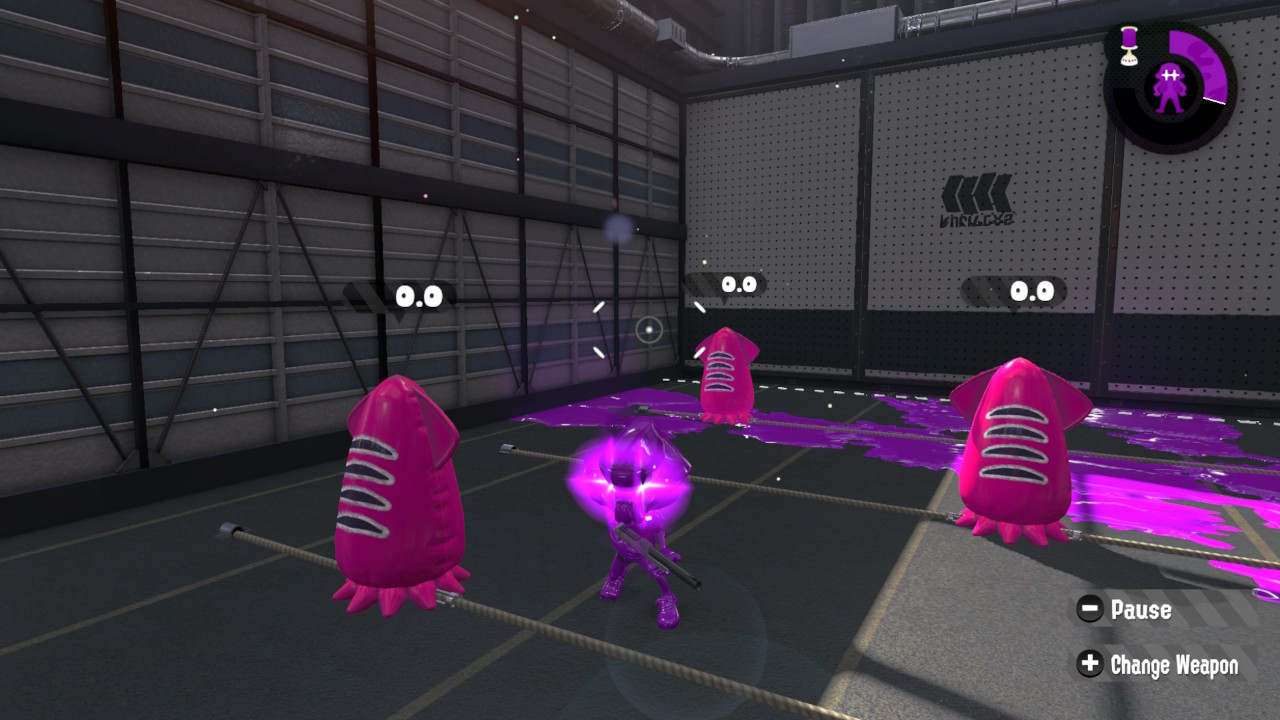 It’s nice that Splat 2 let us change our gear after a match without needing to re-queue, but sometimes we need to fire off a few shots or just move around to get the hang of our loadout.

9. Stealth Jump as a built-in feature

The Stealth Jump ability was nerfed pretty hard since Splat 1. Originally, it helped prevent spawn camping, which made the game feel so much more accessible for new players, but it also made veterans pay attention to the map.

Now, if you kill someone, just wait a few seconds to see if someone is about to land. And then someone else. And someone else, again. Sure, you can’t see people coming from as far away if you’re using it, but unless it’s reverted to its old version, Stealth Jump still feels required but boring, which is usually not a good design point. Maybe the new spawner drone helps with that, though.

Just google nautilus and Splatoon. Ignore the guns; focus on the fan-race designs. Nice, right? I would love to see something like these as a new third playable race (Octolings were playable in Splat 2 once unlocked via DLC, and the official Splat 3 site confirms their return as playable characters). Maybe they won’t come at release, if ever, but I’d be happy enough to get them in a DLC. And speaking of customization… 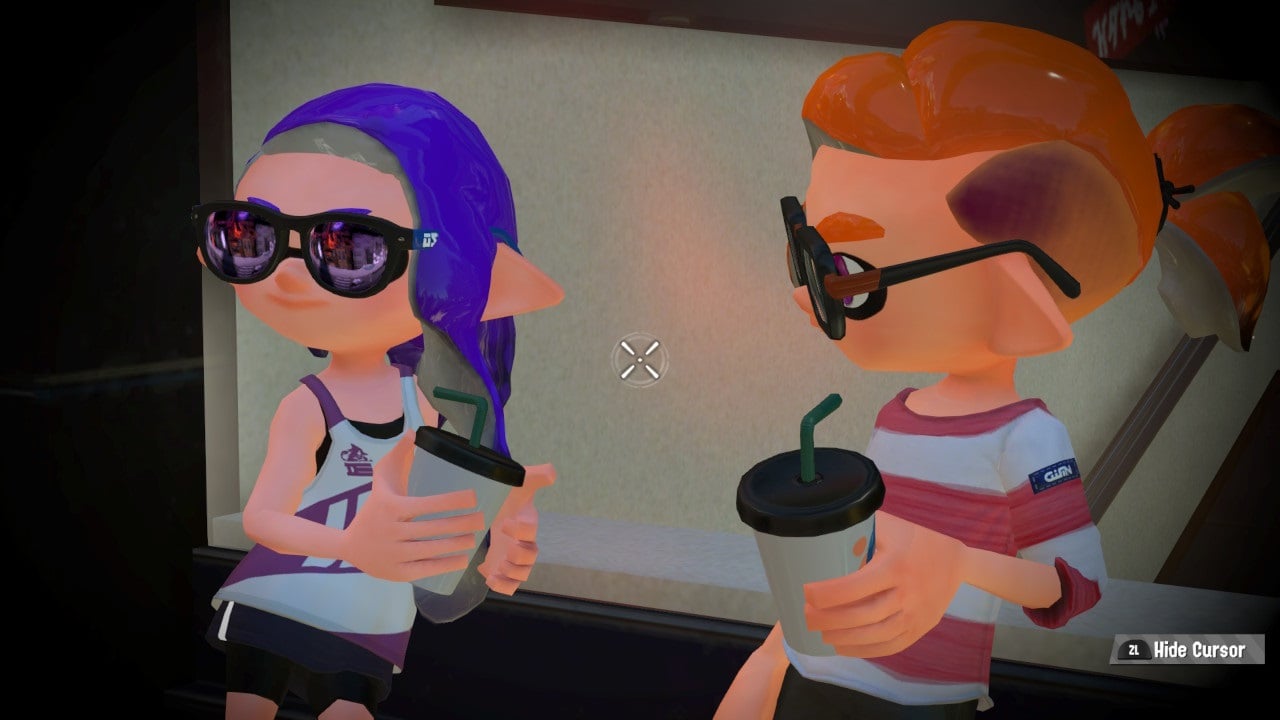 I know the Nintendo Switch app allowed you to occasionally get gear that didn’t follow the traditional rules (i.e., Green Rain Boots without Stealth Jump), but it often felt like a clumsy add-on. Nintendo likely wants something e-sportsy, but for that, wouldn’t it be easier if everyone had pre-set gear to ensure an even playing field? As in, players could have a “tournament closet” and a “street wars” closet. That would allow casual players to dress as they like without also camping on the app. I’m sure someone was hoping that driving players to the app would increase voice-chat use, but I never saw that. And to build on the idea of customization…

This is where I’m gonna start dreaming big. While I’d be OK with just a place to show off some trinkets, It would be nice if you could lay stuff out to make a small, simple, customized map that can only be played with friends. Heck, I’d just settle for it to be a custom solo map during the queues as your practice area, hint hint. Still, player housing always feels best when it’s social, so I think it may be time for… 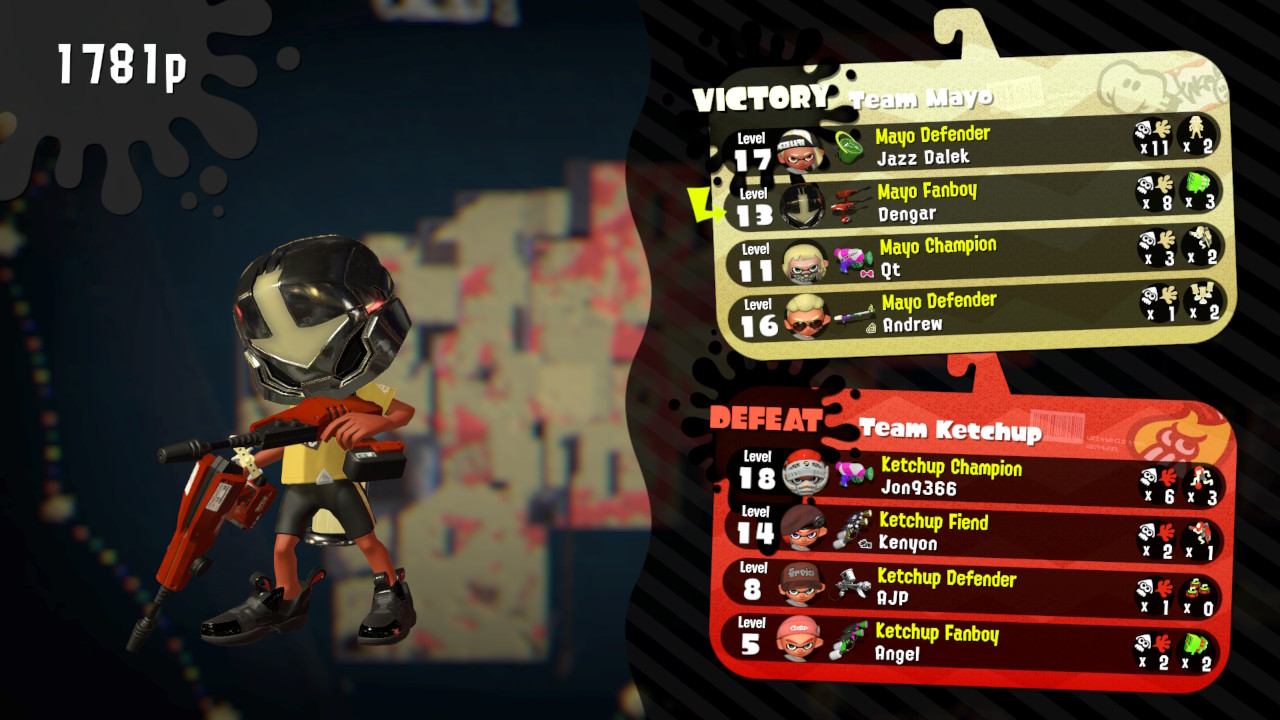 5. Factions in between Splatfests

Splatfests are Splatoon’s core community content. For example, you normally have Mayo vs. Ketchup for the main Splatfest, but maybe for the month, there are burger factions: beef, chicken, turkey, salmon, shrimp, walnut, or black bean. Or heck, just make up factions, like “Shrimp Eaters” or “Inky Kids.” Splatfests are nice for a couple of days of bonding, but 30-days could help with socialization opportunities.

Factions could allow for larger battles, help prevent one side from overwhelming the others, and if paired with squads, could lead to deeper social bonds, especially if Nintendo wants to keep using its app and include a faction chat (realistically, with pre-set dialogue). Some people like ladder matches, some people like pick-up games, and some people want something in-between. Factions could do that, especially if Nintendo paired factions with…

We’re going full Mad Max with this. Between the desert wastes and sprawling city, territories could be as simple as featuring your faction’s art around the map or as complex as connecting maps with separate towns with their own reputation grinds, rewards, discounts, and in-game services. I doubt we could have something as complex as PlanetSide 2’s continent locking, but thematically it could fit, especially if simplified. But as much as I love PvP and online play, let’s consider something else…

One thing that I like about mobile titles is that it’s much easier for me to lure people into mobile titles than ones that require people to come to my house or they have to install on their PC. It’s like a gateway session: they see what’s cool about it, and then choose if they want to get the full experience before hopping online. It worked great for the Monster Hunter series!

While I’m not the guy that brings my Switch to a rooftop party, I have busted it out while lining up for events where you gotta camp for a few hours without moving. Splat 2‘s Salmon Run was nice, as the local multiplayer was fairly flat in terms of itemization stats so people could focus on skill, plus you could adjust the difficulty. A friend who hadn’t yet gotten a Switch but had heard about the game was interested once, so the guys fired up some Salmon Run matches so she could get a feel for things.

The problem, of course, was that I had to switch off my Switch to my friend so she could try it. It’s fun, but we could do better. That’s why I’m excited about the Smallfry pictured above. I’m not sure what our little fish buddy does, but it would be cool if there were modes where a friend can control that little guy, maybe with one player as the inkling swimming around and the second player as Little Buddy doing the shooting. 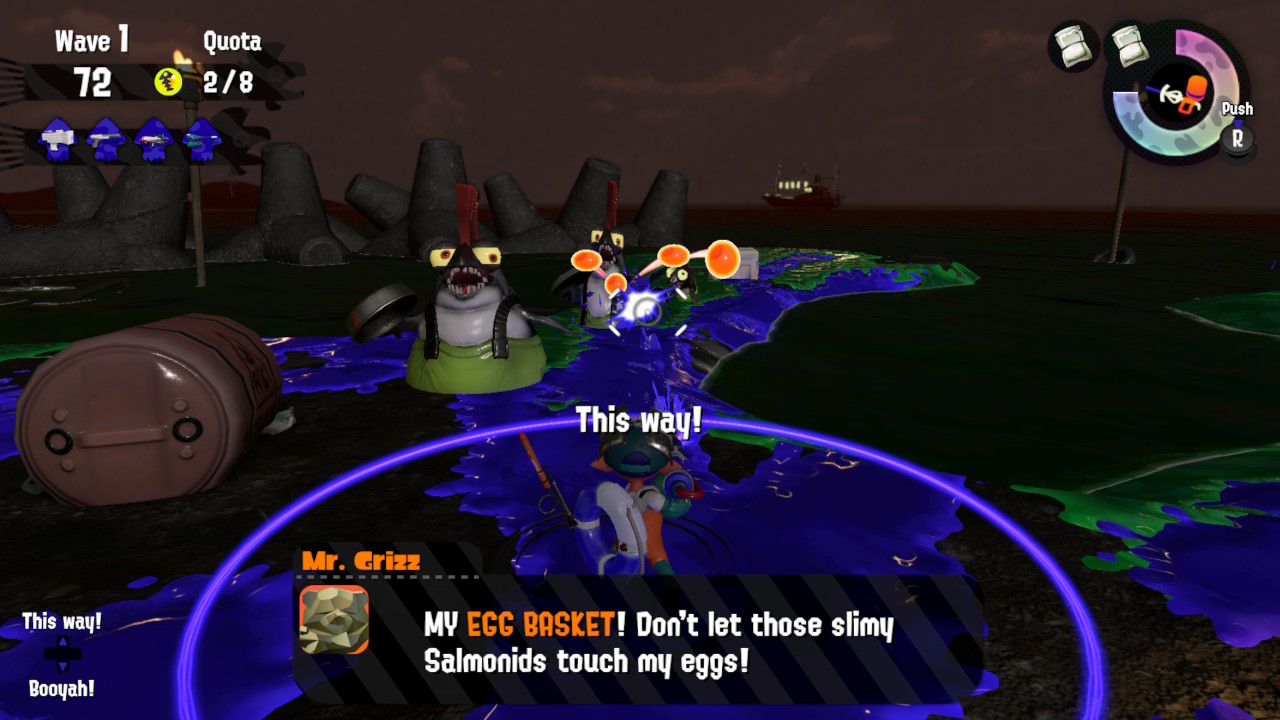 I really feel that the PvE content drew more people to the franchise. In fact, the only person I still knew who was really into the game prior to the announcement played Salmon Run, the series’ first co-op multiplayer option, with her friends and partner. The wave scenarios are fun and varied for the most part, though it can get frustrating with randoms. That said, the “rank” system probably helped with that.

I imagine Nintendo could do better, though. Food delivery quests, splatting rival NPC fashion models hidden around a city, ride protection from sandworms (I can’t imagine there not being Splat sandworms of some kind… sand eels?), co-op mazes… our basic gameplay, especially in terms of movement combined with paint, have created some wildly interesting situations, many of which feel restricted to the single-player mode.

We also have some really cool weapons that fit a variety of roles without resorting to the traditional DPS/Tank/Healer trinity that has seemingly invaded every genre at this point (RIP Mezzers), but I feel many rarely shine. Salmon Run helps a little, but I know Nintendo can do better.

Splatoon stands out among “shooters” as a non-shooter. I mean, we shoot, but painting tends to be the main focus. We’re (mostly) squid kids running around a post-apocalyptic world that somehow contains crazy tech yet battles are with paint. Nintendo’s creativity and depth with the franchise through world-building arguably rivals older franchises such as The Legend of Zelda. And finally, speaking of world building…

1. The return of the Inkstrike

I don’t care about the old lore; just bring inkstrike back in one of the special format battles, cowards! Tenta Missiles are cute, but there is nothing as satisfying or horrifying than realizing there’s an incoming paint-nuke. Scale it up, make it scary-fun, even if it’s just a PvE mode. Inkstrike defined Splatoon in terms of crazy, and the new setting seems to fit it perfectly.

Everyone likes a good list, and we are no different! Perfect Ten takes an MMO topic and divvies it up into 10 delicious, entertaining, and often informative segments for your snacking pleasure. Got a good idea for a list? Email justin@massivelyop.com or eliot@massivelyop.com with the subject line “Perfect Ten.”
Advertisement