Now personally, I don’t do a whole lot of scuba diving or anything, mostly because I have a healthy fear of everything that lurks underwater. I’ve seen sharks and jellyfish and other nameless terrors in person, and so I’m going to keep my butt on dry land for the time being.

“This is a pic of Aquabase Terror Seven from Guild Wars 2. I really like the underwater part of this game. I hope to see more when we go to Cantha in the next expansion. Maybe we will have some good Deep Sea Dragon action!” 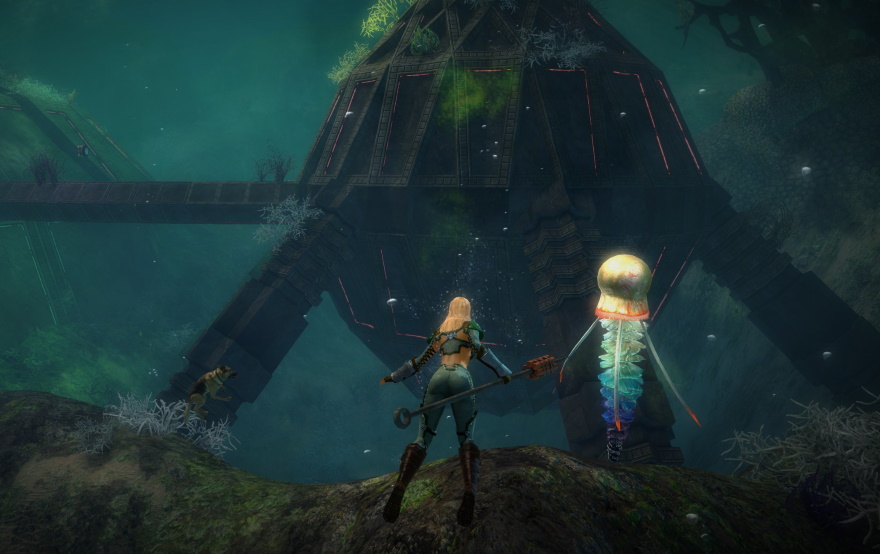 “It might not be underwater but I did try to make my character looks as if she’s gliding above water while watching a remnant from a mysterious civilization,” posted Lethia. “As I’ve been raving about Allods Online for a bit now, I just had to show how pretty the graphics still are for a game born over 10 years ago.” 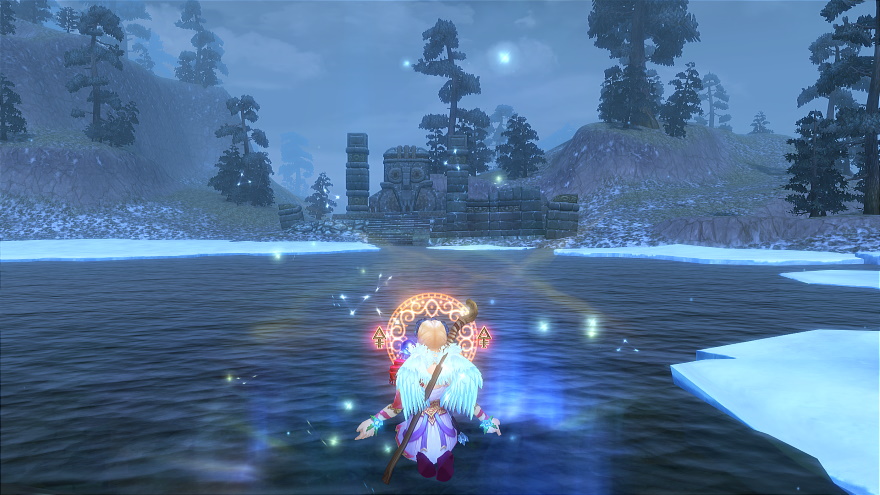 We were a little low on submissions last week, so I’m throwing in a personal screenshot here for the fun of it! My Elder Scrolls Online Warden had a great time exploring the prison corridors of Coldharbour and helping to facilitate a jailbreak. 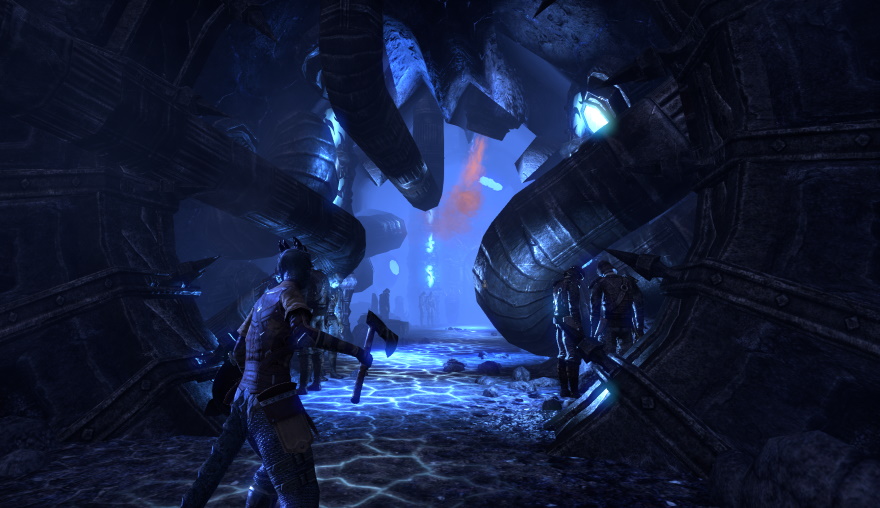 Bereman99 is here with a Final Fantasy XIV fashion tip: “Apparently one of my minions didn’t take too kindly too whatever wizardry we use in Eorzea to take those pictures. *Bonk* The first thing when finalizing a glamour is to pose to show it off via a screenshot to someone else (in this case it was my wife).” 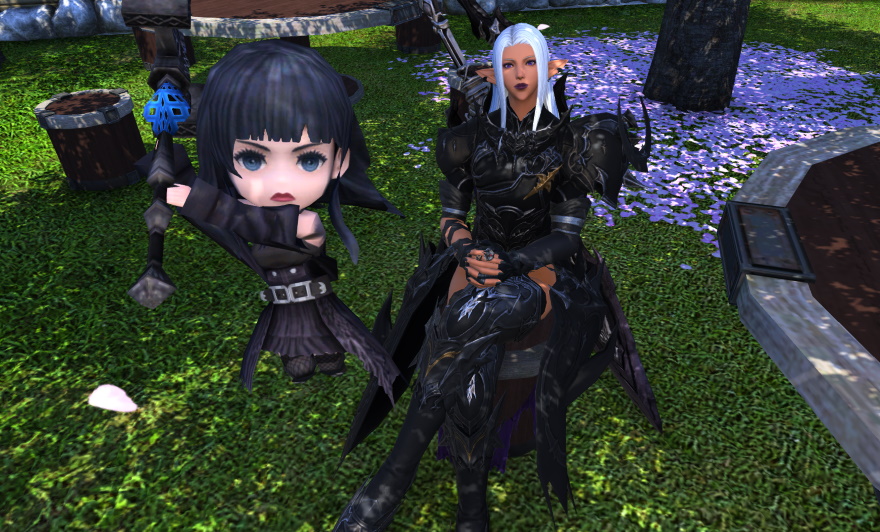 And Utakata made it a personal mission to climb to the very highest spot in Blade and Soul — and then presumably drop a penny to see if it would kill the raid boss below. 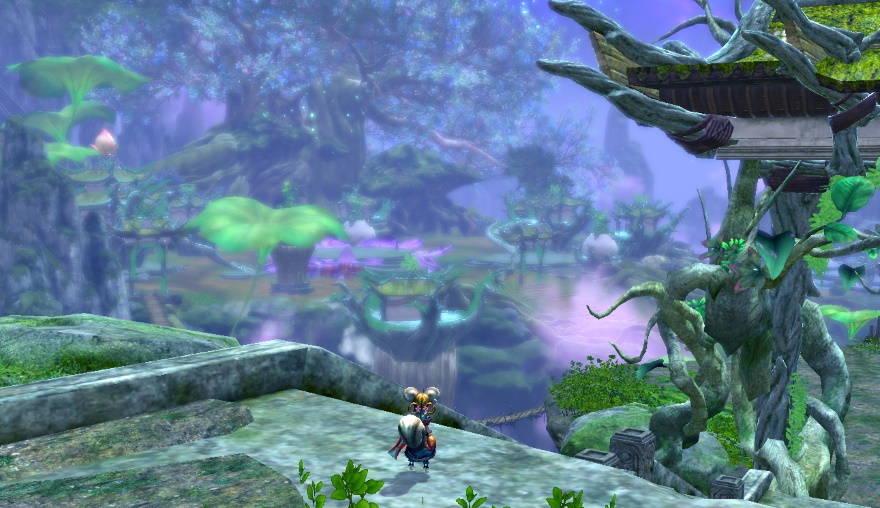 Now that you’ve enjoyed the fruits of others’ labor, it’s time for you to flex that print screen finger and get to clickin’! This week’s optional screenshot challenge is to wing us a picture of your favorite MMO avians — big or small. Birdies. Take pics of birdies.

This magnificent creature is a Tengu. They were almost a playable race is GW2. Sadly, my dream of a playable dinosaur in a MMO is still unfulfilled. Birds are modern dinosaurs, fyi.

I have a special fondness for this ludicrous fellow, which we used to gun down the biggest damned dodo you’ve ever seen.

I haven’t taken any good screenshots in the last few weeks, but I do have some… passable old bird pics from before my video card & monitor upgrade.

My nameless Destiny 2 character chilling with an owl at The Farm last summer.

And a couple of old screenshots from 2013, not long before I took a 3-years break from LoTRO:

“It’s a beautiful morning in Rohan, and you are a horrible black swan.” (Seriously, I don’t get the malice ascribed to these birds in the lore…)

Meneldor the Great Eagle, after an encounter with some equally oversized arachnids. Doubtless some species from Australia.

It’s one nice change of pace in GW2’s world of constant conflict, when you get a ride on an airship and enjoy such a beautiful sunset!

Last shot: It’s been a year since concerts were safe enough (except in New Zealand, ofc), so a concert in your favorite MMO is the next best thing!
(I must say Anet’s devs really outdone themselves on this one! The 3 Metal Legion songs were produced by Stan LePard, who sadly passed away recently.)

Here’s a video, but participating in it, is whole other experience!

As for the challenge, is a griffon a birdie? ^^ If yes:

While catching up 3+ years of content in GW2 in this pandemic, I finally scraped enough gold to unlock the griffon mount and enough gems for its snow owl/leopard skin!

I found them already so majestic, when I first encountered owl griffons in the starting area for my main Norn, when GW2 launched! Now it comes full circle after so many years playing this game!

This one is an easy pick for me: Solar Spirehawk (rare drop from the world boss Rukhmar in the Spires of Arak, Draenor). I started the hunt for this beauty in December 2019, and finally got her in February 2021! For the reference, I started running Firelands raid at the same time, and got the pureblood fire hawk back in October 2020. It took me a little while, but it was worth it. Collecting these beauties is really what keeps me playing WoW still.

Right. So, not the avian variety, though.
I played a beta test for a mobile game called Birdie Crush back in September of 2018.
It’s an anime-themed golf title, and eagerly awaited the launch.
The game has been available in many far east countries for about 2 years, but was finally released in the west about a month ago (after more than a million pre-registrations). I play it on my PC through Bluestacks.

There are live head-to-head matches, asynchronous tournaments with up to 60 players, and Clubs (guilds) to join. I’m not claiming it’s an MMO, but it has elements. It’s great fun. And lots and lots of “birdies”. ;)

Bat out of Hell…

PS: Oh right, Mr. Justin did post my contribution least week at the bottom, now that I can see ’em all. To which I thank him for again. /bow

Just a clarification on that though…it’s the highest point where the main story content goes. It may not be the highest place in the physical game world. I hope that makes sense.

The pictures aren’t showing up on the page. I have to view each image as a separate tab.

Clicking on the images, then going back one page seems to be bringing all up for me. But yeah, we shouldn’t be needing to do that to see what the author has posted. :(

…PS: Glad I wasn’t the only one having this issue. /phew

Nevertheless MOP got significantly slower over the past year or so for me, even without loading all the media!

Not sure what you folks are doing, but something in your image coding is making Ad-block just block every single image you put up. Headers, all the photos in here, the story article front photos, and even logging in is making me toggle one of the two ad-blocks I have on/off just to login. I mean, if your intention is to just become a text based web-page, keep it up…

Interestingly, it’s NOT blocking the person below me’s photos.

I have a similar thing, I thought it was my end. I can see the normal ads and if I click on where the images should be, I can view them fine, and yeah can see my own posted shots normally. Not sure what the issue is.