Naïca hasn’t been around long enough for anyone to remember the combination of keys to make the ï without copypasta, and now it’s over, so no one will have to. Readers will recall that the game popped up on our radar at the end of 2019 and rolled into open beta last November as a 2-D cross-platform MMO. The game was intended to get much more development before launch, but as of this week, that’s no longer the case.

“[O]n friday 5th of March, the majority of the team will leave the company (me included),” Millenium [sic] Studio developer ZeddOTak told players on Discord. “This is directly related to the launch of the open Beta on November 10.”

“In short: the launched failed for multiple reasons, and the project is not sustainable for the company in this current form. Naïca was the first video game project for the whole team, and trust me it wasn’t easy to go this far! […] Naïca will still be available to all players, and everything stays in place.”

Apparently, two devs will remain with the company as Lead Developer & Level Designer, but they’ll be working on “a new exciting project related to Naïca, which will be available later on” rather than on the game people already paid into. The devs later clarified that this is a “new game, with Naïca’s design, characters, etc.”

Players in the Discord (and our inbox) seem pretty miffed over the situation, as developer comms until yesterday were sparse but gave no indication that the end of development and maintenance mode were coming, suggesting players were unwittingly feeding the cash shop the whole time even as developers moved on to this new project behind the scenes. Moreover, both our tipster and Discord players reported rather serious lag, bugs, and account exploits that seemingly remain unfixed. At this stage, we recommend that if you have a Naïca account, you should change your passwords and take steps to safeguard your PID. 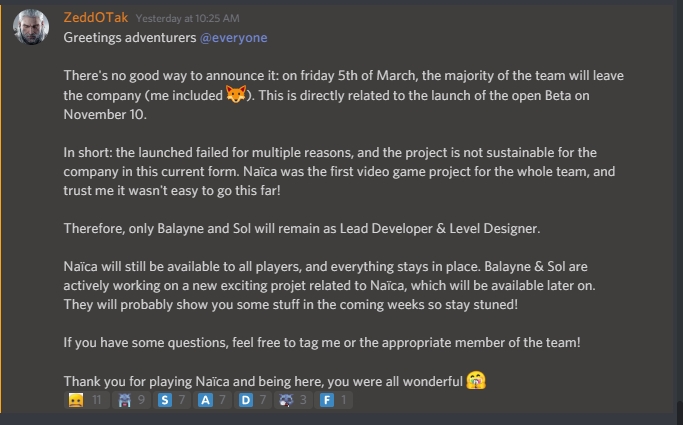 Source: Discord. With thanks to Sam!
Advertisement