Ready to bask in the riches that Gamigo wishes to pour down upon your upturned face? Then you’ll first want to head over to either version of Defiance, where the company is handing out free sets of caches and crates to any player who participates in a single Arkfall during these successive events.

END_OF_DOCUMENT_TOKEN_TO_BE_REPLACED
Gamigo is trying so hard to pave over hurt feelings from the game’s imminent cancelation that it’s even allowing players to petition them to grant the special item that they’ve never had. The company said that it won’t grant all of these wishes but will hold a daily lotto to do some of them. So it’s a make-a-wish foundation for soon-to-be-displaced Defiance players? Pretty much, yeah.

Things get even weirder over at Gamigo’s Trove, where the studio is bribing players to fill out a gaming preference survey (which includes giving themselves a Bartle player archetype test). If you take this survey by March 9th, you’ll get a free lustrous gem box in the game.

Finally, the studio has posted the full schedule of sunset events for the Defiance franchise, so you’ll know exactly when to show up. 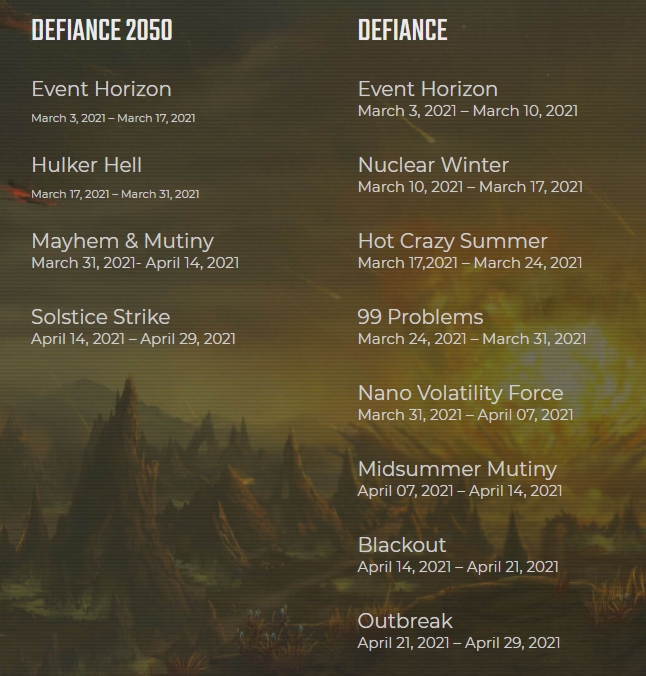 For a final exploration of Defiance, I created a new avatar in the original version, a female Irathient to provide contrast with the male Human avatar I still have from 2013. She was horrified to discover that many graphic surfaces are missing, like much of this house at Iron Demon Ranch! Bridges have support beams but no visible surfaces, so you walk on air! Architecture varies in whether the loss of graphic surfaces makes the thing black or transparent, but you still can’t walk though it. Apparently an entire “folder” of graphic surfaces was erased or disconnected.

I don’t think it’s weird, i think it’s literally what Gamigo is: Lackluster.

This survey is clearly their way of gathering data ( because they fucked up their main channels when they decided to not give a shit about their games ), and they’re trying to figure out the direction they wanna follow.

It’s a really dumb way of doing things, and i expect nothing less of this godawful company. The Defiance wish-a-ton is just a slap in the player’s faces.