Whether you ended up indifferent or excited after Elite: Dangerous offered a preview of a mission from its Odyssey expansion, you very likely had a number of questions. In which case, you very likely will want to look over this recap of a Q&A livestream from this past Thursday.

The livestream offered a number of additional details about missions in Odyssey, such as confirmation that there will be a wide variety of settlement types; confirmation that missions can either be unique to certain settlement types as well as static or available to all settlements; and word that mission variance takes into account things like the planet itself, the type of faction that currently has ownership of a settlement as determined by the background simulation, and more. One example of a different type of mission is one where players have to replace a power core, depressurize buildings, and put out fires in a settlement, all while possibly dealing with hostile scavengers.

As far as clearing mission objectives, there are reportedly a number of methods that players could use to complete the mission shown in the video, including making way to the command building to take security systems offline, carefully scanning patrol routes, using stealth-based suit mods and silenced weapons, or even scanning an NPC to snatch security clearance to an otherwise unauthorized building. Naturally, NPCs will react to any number of actions players take in a settlement, and guards may ask players to submit to a scan if they are suspicious. Player relationships with a settlement’s controlling faction can also factor into a mission; if players are hostile against a faction, things will likely open up with a full-blown shootout. Furthermore, actions will have consequences in the form of bounties for criminal acts. 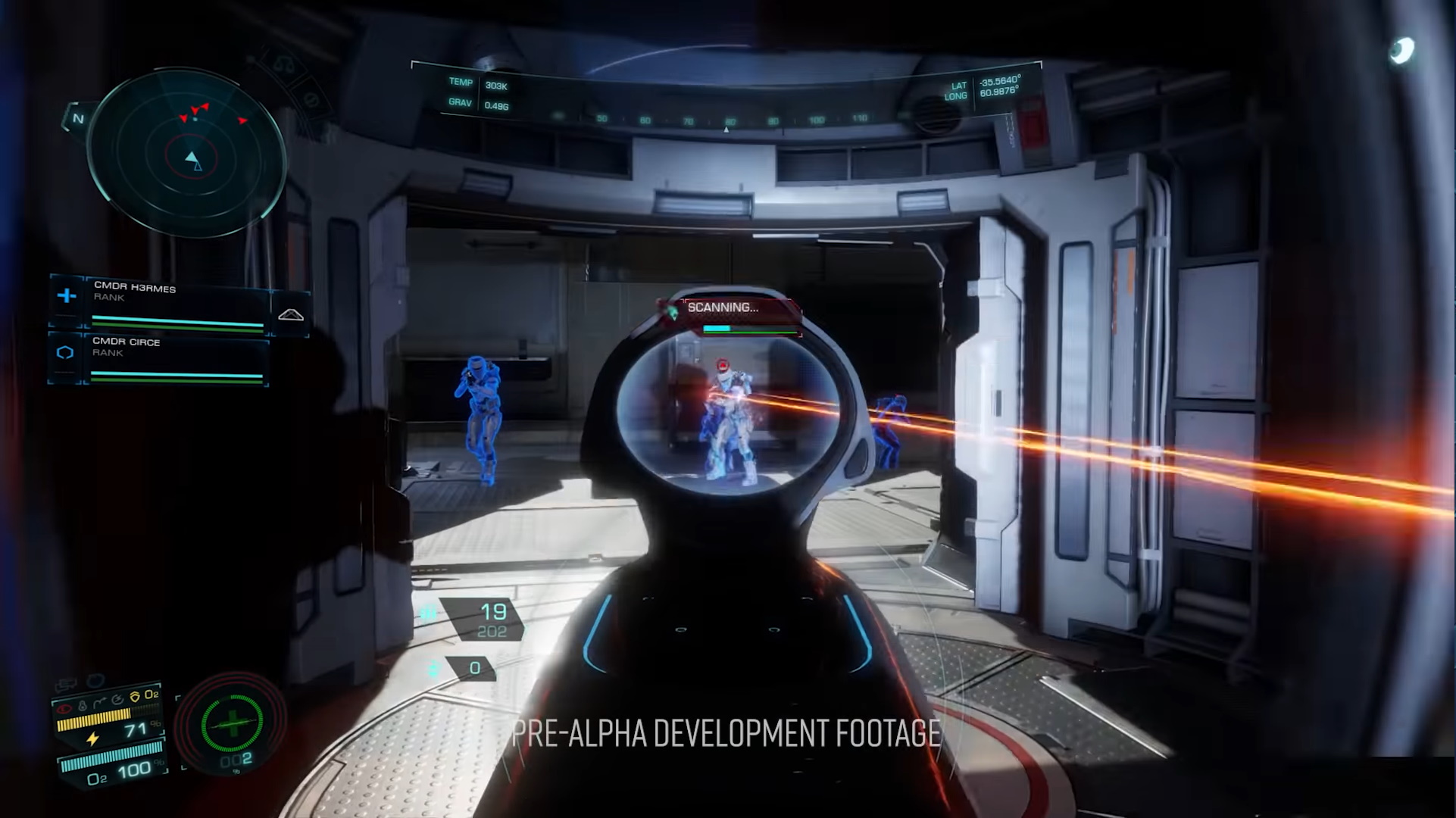 Speaking of NPC guards, their difficulty is noted as “incredibly variable,” with variance based on gear as well as behavioral elements like weapon accuracy and dodging that scale up with higher tier AI. Players can scan NPCs to get an idea of how strong they are, and naturally taking on more challenging missions will yield greater rewards.

On the subject of gear, suits will play a major factor in the kinds of weapons and tools players can carry, and players can specialize their loadout based on the mission they’re taking on or for specific tasks; one player can field powerful laser weapons to take out shields while another sports strong kinetic weapons to finish foes off. As far as suit management, players will have to take into account things like managing power-hungry shields, life support, and even taking note of a planet’s temperature, which can cause internal damage if things get too hot. To help with suit management, there will be tools players can use, while some settlements may have things like power recharge stations.

Finally, should players die in a mission, the mission fails, players drop the items in their backpack, and they respawn either at a nearby port or outpost if they have no ship or they have the option to respawn at a port or in their ship if they own one. If the ship is on the planet’s surface, they’ll respawn with the ship in orbit, otherwise they’ll respawn at the port their ship is docked in.

As you can see, there’s a lot of information to be absorbed, so fans may want to read through the recap themselves or watch the full video embedded below.

source: official forums, thanks to StuartGT for the tip!
Advertisement

But I have to say in turn that:
– I’m getting tired of talking head livestreams and pre-alpha stills. We should be well past that, imo
– the lack of them is making me a little …well, suspicious is too strong a word. Let’s say curious about how much is actually DONE. As much as ED gets credit for actually delivering gameplay that SC gets constantly crapped on for only talking about, SC has far more to show about what it’s doing vs ED pretty much spending the last several months talking about what they want to do.
– what I have seen of ED first person shooter gameplay is not even up to Quake 3 standards. There are a number of non-trivial aspects about first person shooters and particularly ones in true 3d settings with variable gravity that I’m not honestly convinced they have a firm grasp on even now.

Going on Frontier’s past performance, how much is actually done is what we actually see in this trailer minus the features they’ve faked and have to drop when they can’t get them to work for release. Seeing this is nearly three years work with just couple of months before full release on PC, very little will change before release. The “pre-alpha label” is there to ward off reviewers who’d trash what they see and kill the pre-order sales.

Well, we’ve got three and a bit weeks until the 29th and we’ll find out for ourselves.

One of the things I do know, is that they have modelled gravity correctly, so the players were running around in less than 0.5g, so things do look a little weird. It will be interesting to see what it’s like in a 1G planet.

You know they have modelled gravity correctly?? How do you know? There’s no sign of that in any of the trailers.

They mentioned it in the Q&A session that accompanied the demo.

So you don’t know. And unless you are new so this game, you should know a feature Frontier mentions before release is a million miles from a feature they actually deliver on release. Remember the last major update was supposed to include three different models of fleet carrier and all they delivered was one model plus three skins on sale in the microtransactions shop.

I thought I was perfectly clear when I said ‘They mentioned it in the Q&A Session’.

ha ha ha, as if I’m new to Elite. I’m well aware of the throw it out there and then refine it approach that fdev use. What I do know about the fleet carrier was that their first design (the one with the support ship) didn’t give the players they flexibility they wanted. So they reworked it. Pity it took an extra six months and cost us all the interstellar infinitives. But onw thing Fdev love is their science and physics. Damn right they’ll have modelled the gravity.

how is “respawning” explained? when your ship blows up the ship voice calls out “eject” making me assume that you get an escape capsule ride back to the station, but what’s the deal with in-person “death”?

I’m curious if they’ll be able to explain it away, but probably not

Explain it away? Ha Ha Ha. They haven’t even explained how we respawn after our ship is destroyed. Are you are instantly transported back to the station in an escape pod, even if you’re half a galaxy away?

Heck, I want that escape pod’s drive attached to my ship.

Players: So what’s used to explain why we respawn? Are we clones or remote controlling our avatars from the pilot’s homeworld?
FDev: Don’t worry you’re pretty little head about it…. Look Thargoids!!

Frontier has long given up trying to make these mechanics look like they make sense. And really the mechanics are now so nonsensical, giving up is probably the only thing they can do. For example in Odyssey apparently if land your ship, get out, and die, your dead self gets a choice of respawn locations. “Ship” get your ship magically transported back to space first. If you left your ship at a station, you’ll get magically transported into it… even across half the galaxy in an instant.