What do you get if you take the Among Us crew and traitor system, MMO staples like gathering and crafting, survival games’ hunger and warmth stats, and then get stuck on a mountain in a blizzard with seven other players? The answer: Project Winter. Add in different game modes and shiny cosmetics and… well, you’ve got my attention.

Project Winter is a game about surviving a blizzard stranded atop a mountain in a cabin with several other survivors. You all must work together to repair the base and call in an evacuation helicopter. The only problem is there’s a traitor, sometimes multiple traitors, among… us.

As someone extremely familiar with social deduction tabletop games like Ultimate Werewolf, Coup, and Avalon, I was immediately in my element  – that is, until it dawned on me that I would be bluffing and talking to actual living, breathing people. For a brief moment my fight-or-flight response began to kick in until I remembered: This is Fight or Kite, and there’s no place to run here. So, I set my social insecurities aside for the good of the game – and ultimately I had a good time.

I’ll be frank: I’ve never played Among Us. I know it plays a lot like the card games mentioned above, but the thing about those that I enjoy so much is playing with friends of mine. If I want to play that type of game with my friends, we gravitate to one of those card games rather than a video game replica. Project Winter though, adds a ton of mechanics that I really love in my video games that I won’t find in a deck of cards.

What makes the game interesting to me and helps it stand out from the card games is its survival mechanics. Players need to keep warm and fed, so you will need to chop trees and find something to eat. You take your raw materials and craft food, harvesting tools, and even med packs. Bunkers containing several useful items can be found around the map, but they typically require multiple players operating switches simultaneously for them to open. There are so many tasks that need to be accomplished, and the team really needs to work together to accomplish them. There’s barely any downtime in a match.

Voice chat is a near requirement for the game too. While the developers have included some different emotes so that you can technically get by without voice chat, you really need it to be able to divvy up the tasks or finger the traitor. The voice system works really well here too. You’ll only be able to hear each other when you’re close to one another. So you can keep a low profile by chatting out of earshot. There are also walkie-talkies you can collect, giving you a secret means of communication.

One very cool mechanic Other Ocean Interactive has implemented is a slight twist on Among Us’s emergency meeting. While I see the emergency meeting as a kind of forced mechanic, Project Winter has temporary snowstorms and other events to act as a more natural means of gathering players. Essentially every five minutes or so, a snowstorm will blow in that dramatically drops the temperature of players caught out in it. So naturally players will return to the cabin during this time to stay warm and wait it out. Incidentally, all the players gathered together are now able to discuss their progress and who they think the traitors are.

On top of all of this, should you die during a match, you gain the ability to remain in the game by turning into a ghost and moving amongst the remaining players. You can’t talk to anyone that’s still alive, but you are able to add some buffs or a debuff to living players. It’s a nice mechanic to keep you active in game even if you’ve died.

One feature that I absolutely love here are the different game modes. Project Winter includes three primary game modes and even a custom one. 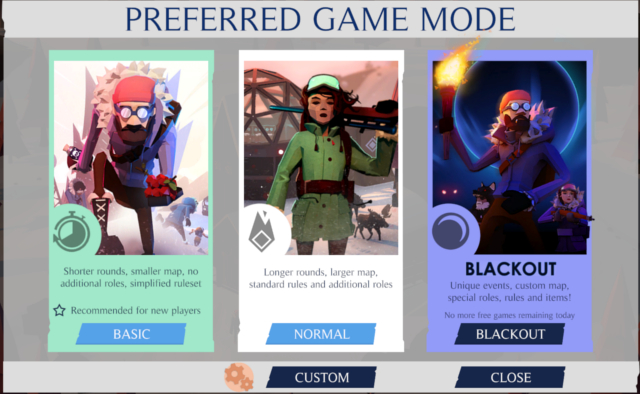 To begin we should go back to the top and understand the basics. At a very high level, Project Winter plays much like Among Us. You and seven other players are stuck on a mountain with a blizzard approaching. The only way to survive is to radio in a helicopter to save you. In the basic game mode, you’ve got two objectives to complete: repair the helipad and the power station. These are like small fetch quests. You need to locate the objectives then inspect them to find out how to repair them. Usually this is done with either a few circuit boards or mechanical parts. Once those tasks are completed, players can return to the cabin to call in the helicopter and then make their way to the helipad to escape. This must all be done within a time limit, which is 15 minutes for the base game.

Of course among the eight players are typically two traitors. So while the survivors are trying to repair the objectives, the traitors are hunting for loot only accessible to them to interfere with the survivors. This can be sneaky and subtle, like sabotaging an objective they’ve already repaired or even poisoning some food. Or you can be more direct by shooting them in the face. You know, whatever your preference.

Normal mode extends a round from 15 to 30 minutes, increases the map size, and most importantly adds in classes. There are about 10 different classes, and while they don’t change your gameplay significantly, they do grant you a unique ability. Medics can revive fallen players. Defectors can open traitor crates. It’s a cool way to keep the game from getting stale.

The newest mode was actually released as DLC called Blackout. I haven’t played the DLC yet, but a quick peek at some Twitch streams makes it look like a whole different game. The entire theme changes from just being survivors trapped on a mountain to being trapped on a mountain with a supernatural twist. The traitors can either be Demons or Whisperers, where their goal is to convert survivors rather than just killing them. Survivors have new roles such as Mediums or Hunters. It seems like a really nice twist on the game’s primary theme.

Lastly, if players want to create a custom lobby, where they can tweak and configure the ruleset that’s available as well. It’s not limited to the fixed game mode settings either. You can choose which roles are available, how much health players have, and even which objectives could spawn. 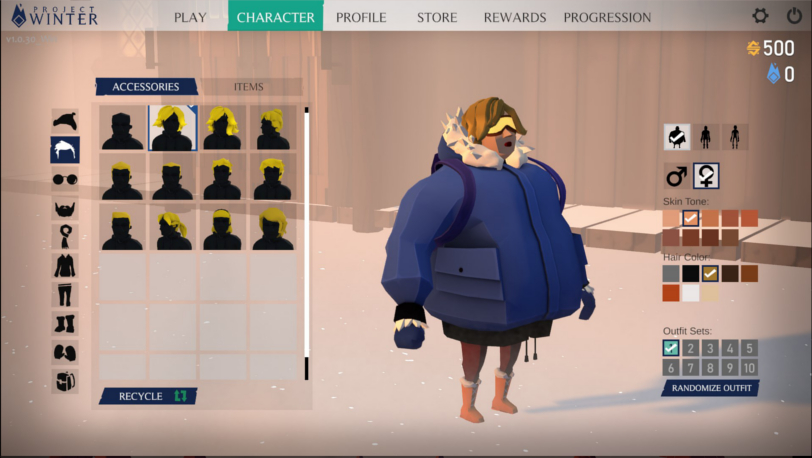 I’ve decried the “heroes” style of games, where you don’t actually play as a character you’ve created yourself but instead as one of the game’s characters. Project Winter could’ve easily gone the lazy route and done that here as well, but instead we get an honest to goodness character builder. And costume slots, so you can save multiple different setups!

On top of that, we have a progression system, albeit a short one, for gaining new cosmetics, as well as a cosmetics shop. The progression system functions primarily as an achievement list. Build 10 campfires to unlock this backpack. Kill so many survivors to unlock another. It’s straightforward, but it’s still a nice way to earn new loot.

This was a pretty quick rundown of Project Winter, and I definitely didn’t include everything the game has to offer. It’s honestly extremely impressive and a satisfying experience. If you’re someone who really enjoys the hidden role aspect of Among Us but wishes there were a little more depth to that pool, I’d recommend you check this out.

Both Among Us and this game allow people to practice lying on voice comms, which is not a trait we should be training people in real life on. There really are sociopaths out there who will kill people, and we don’t need to improve their ability to get away with it.

Everyone is entitled to their own opinions i guess…

The Daily Grind: Are we witnessing the rise of the ‘life...