One of the big selling points in RIFT has always been the ability to combine three of the game’s Souls into a custom class. Granted, the Souls in question were tied to a Calling (aka class) and were a bit limited in that regard, but for the most part the game’s class customization allows for a lot of diversity in terms of class builds.

END_OF_DOCUMENT_TOKEN_TO_BE_REPLACED
In my return trip to the game, I’ve since learned that much of that hasn’t gone out of the window, exactly, but it has actually gotten a whole lot more streamlined. Which is to say that it’s gotten boring.

But I’m getting ahead of myself; let me outline what I’ve been up to so far. 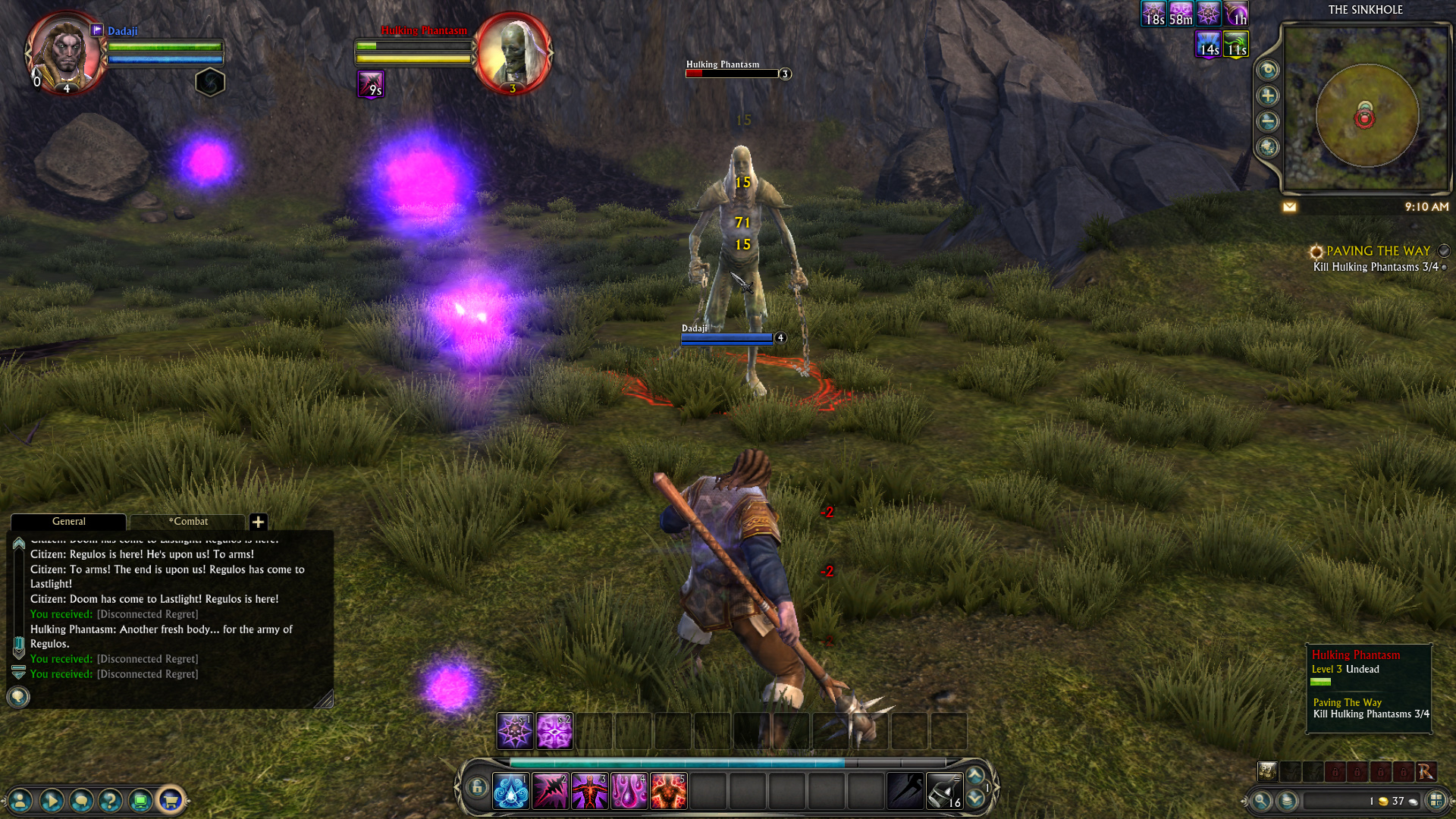 As I was instructed with last week’s polling, I made myself a Defiant Cleric. I’m actually really happy the Defiant won out (by a handy sum, might I add) because that faction always was far more appealing to me than the Guardians. My selection to use Cleric, meanwhile, was with a coin toss — both Cleric and Primalist were tied in the Calling poll, and Cleric won out.

When I first created my Cleric, I was faced with some decisions on following some pre-determined Soul combinations, however. This was definitely a surprise as I’m not sure this was a thing the last time I played. Perhaps it was and I’m misremembering the series of events, but I genuinely was struck unfamiliar by the decision. That all said, I elected to go with the Benefactor build, as it sounded on paper like the closest to the “heal via mace smashing” playstyle I recall Clerics being all about.

What was familiar was the opening beats as a newly-formed Defiant. Everything in regards to the game’s starting experience was precisely as I recall it, though I also feel like there were a lot fewer side quests here than I remember. It’s just as well, honestly, because who wants to be in a tutorial area for too long? Certainly not me, especially since the cadence of events was extremely familiar to me. In this case, the streamlining was very welcome. 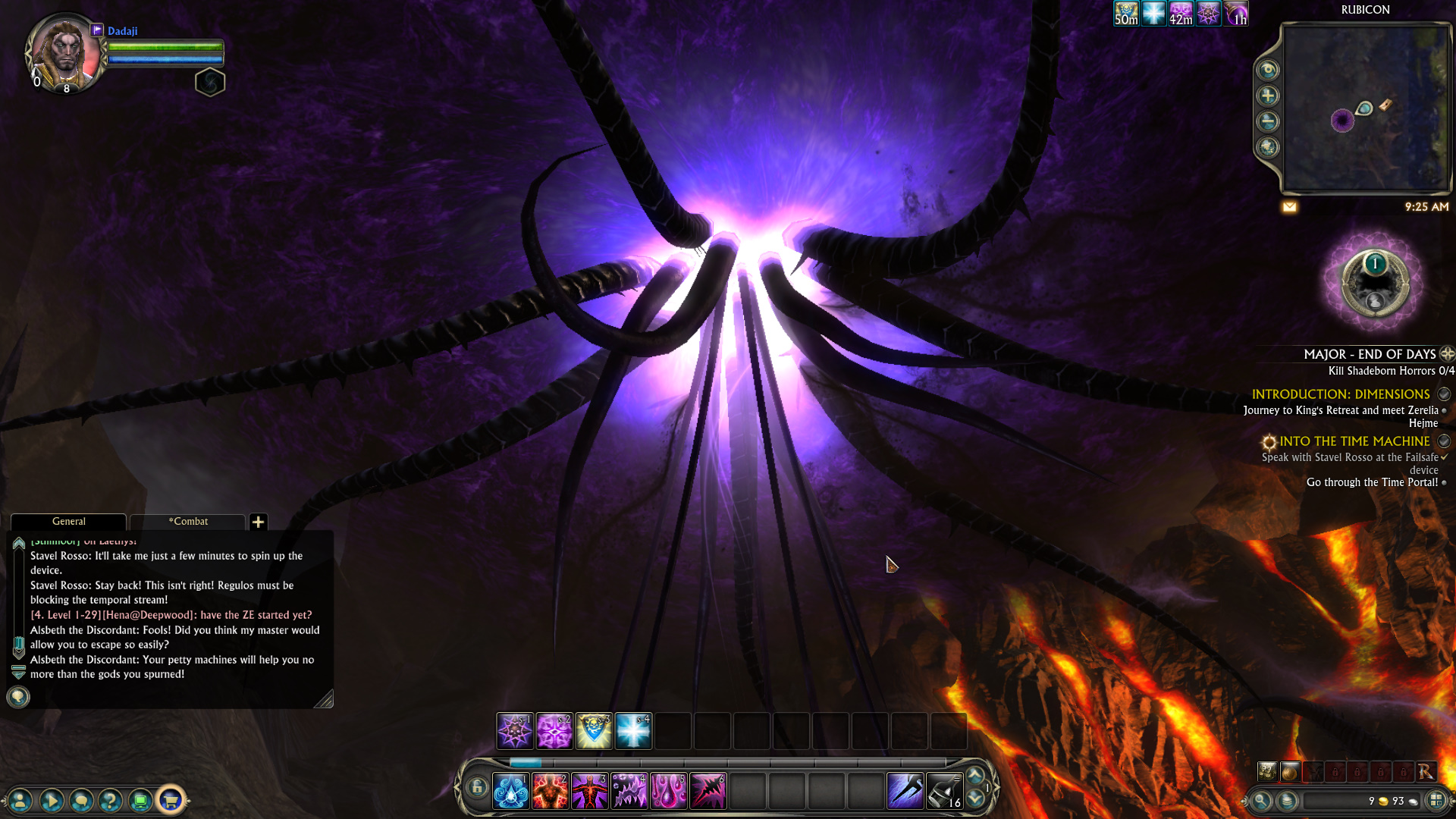 After a few moments playing around with the Benefactor, however, I ended up being a tiny bit underwhelmed. Once again, my memory of the class felt a bit more impactful, but the way this build ran wasn’t incredibly engaging. Granted, I’d only gotten a couple of levels so perhaps it would be a late-bloomer, but I started to explore other options.

And that’s when I found the Auspex, a support class build that was all about debuffing enemies and buffing allies. This sounded far more interesting, and I apparently had some funny money to burn in order to get to the Soul Packs I needed to make the preset happen. So I gave it a shot.

The Auspex, I soon learned, is not a Cleric. Not the Cleric I was looking for, anyway. This Cleric was less about smiting and healing and more about keeping several buffs up and applying reams and reams of DoTs to watch enemies wither away. It also, to this point, feels phenomenally overpowered and extremely effective, which tickled my favored “win by attrition” playstyle.

I’m not a Cleric. I’m a Necromancer, watching foes wither while my strength endures. This was a nice choice. 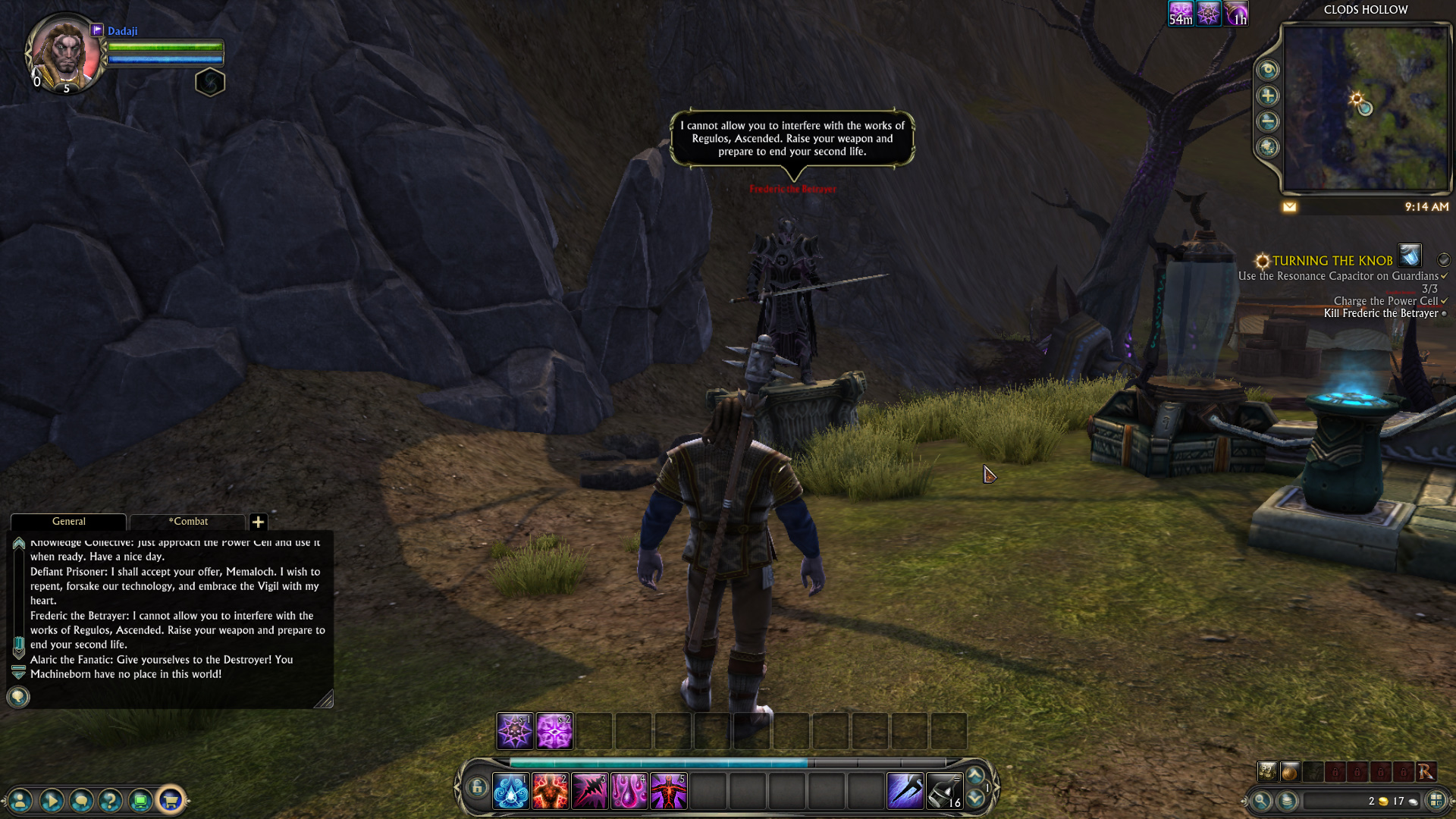 As good as this choice has been, however, I have to admit that the pre-built Soul system has pared things down to the point of being too efficient. I literally don’t have to think about anything other than slowly learning the right rotation, and even then the rotation doesn’t feel complex because most things die after using only three or four of my seven to eight skills thus far. I don’t even need to open the Soul Tree when I level up; I just smash the Spend Soul Points button that arrives on the widow, maybe drag-and-drop a new ability, and carry on with whatever it is I’m doing.

And that’s… well, it’s weird. It’s not unwelcome, especially considering that I would probably make some completely terrible build choices, but it also feels a little too braindead and kind of dulls one of the bigger hooks of RIFT for me. It’s hard to ignore my NecroCleric’s power, but the whole system has also made things fantastically boring.

In fact, “boring” is a good word for my time in-game so far. I wasn’t exactly expecting anyone to be near me in the starter zones — this game’s been out for a while and those playing it are very likely at the furthest reaches of power and related areas — but doing rifts by myself just isn’t fun, following the breadcrumb trail to quests is never really enjoyable, and hitting one button to skill up is extremely guided.

But then I also smile when every enemy that faces me is nearly dead by the time they close distance. 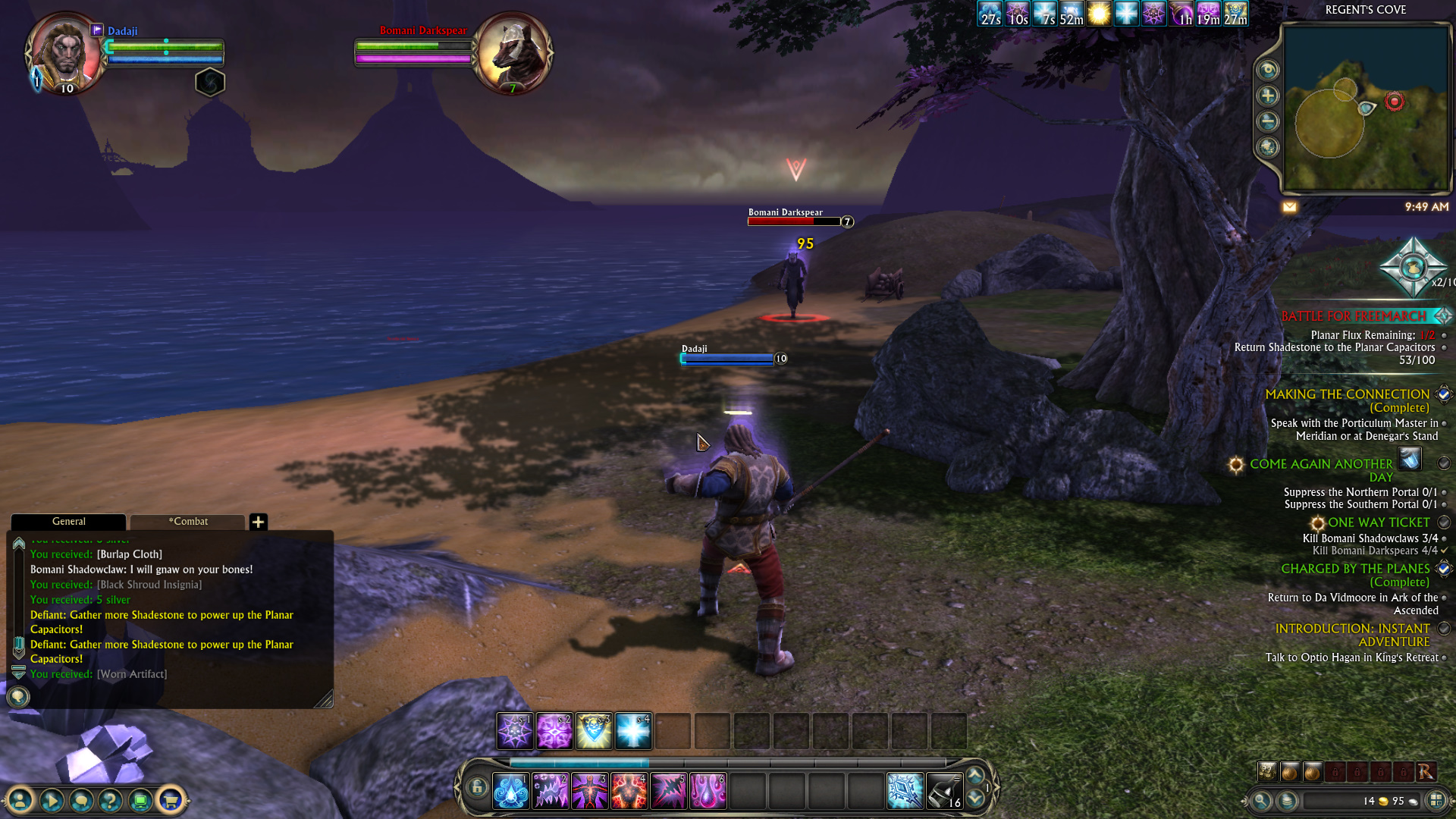 So, we’re sort of at an interesting place in terms of our initial RIFT adventure, which means it’s time to try and possibly shake things up. Or possibly just go with the flow. That’s where this week’s polls come in to play.

The first poll will be, once again, about Souls. I told you I’d be doing this, but I wasn’t expecting it to be so soon! With that in mind, let’s give this another shot, shall we?

The second poll will be about gameplay focus. I’ve leveled up enough to unlock Instant Adventures, but then again I’ve also been granted some temporary subscriber time and am still under the effect of at least one or two XP potions so following the breadcrumbs probably won’t be arduous either. In any event, it’s time to choose a direction. 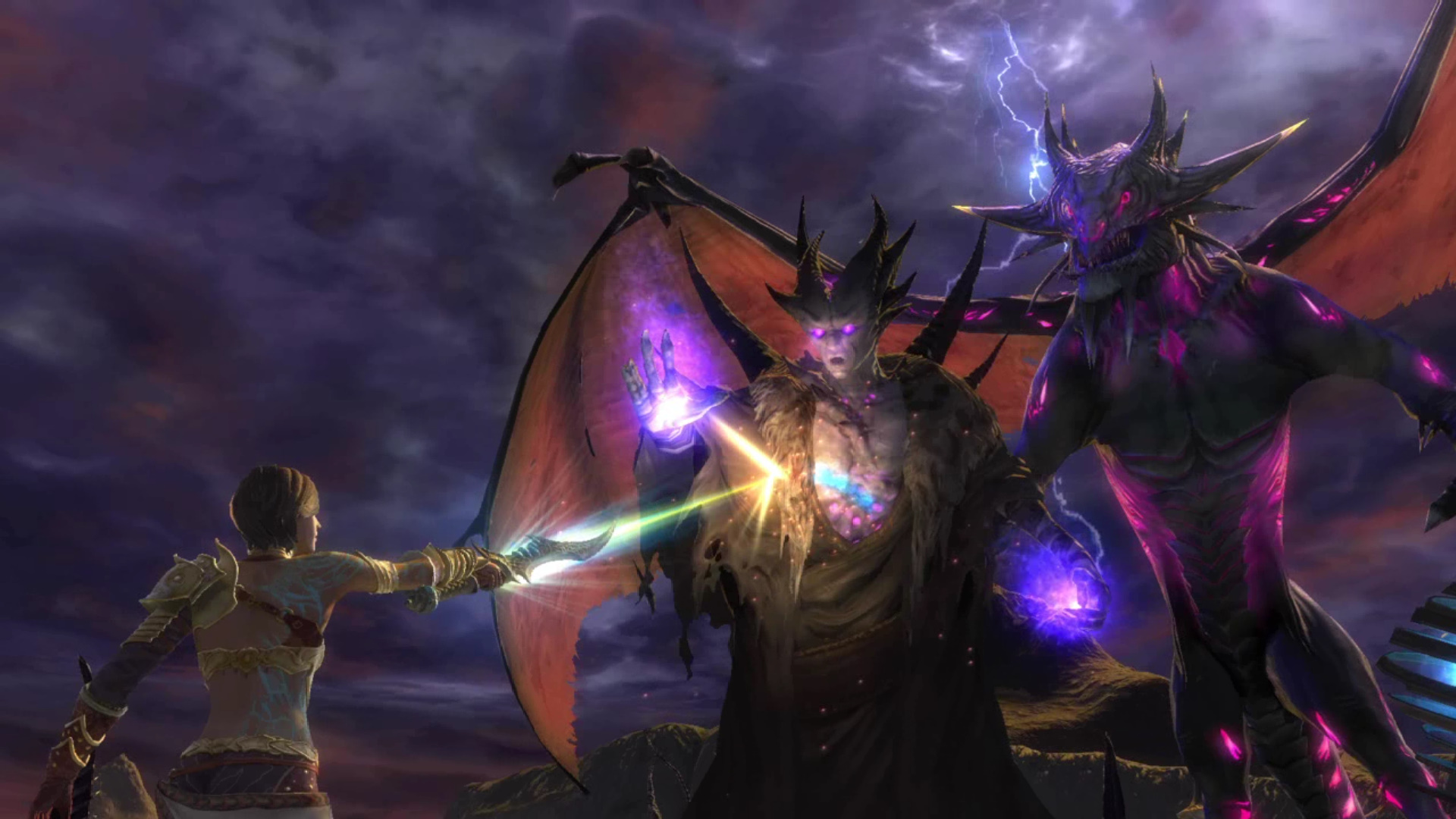 Polling is going to wrap up at the usual time, at 1:00 p.m. EDT on Friday, April 2nd. In the meantime, I’m going to go ahead and put RIFT aside and try to figure out if I’m either being gaslighted by this game or if my memory is beginning to dissolve.

I returned to the game too. Got my old two characters to level 64 this weekend. I did quests and IA’s to level up. Hopefully with all these players returning it will stay open a little longer. The end game zones are really fun as hell to quest in. That is where you will find all the players too.

Only responding to your title :

“That’s OK, most players have turned into zombies anyway.”

(You are my sworn enemy on Rift because of factional forced PvP and I was on the other side, Die Defias scum! But not really, because I don’t fight with others, I’d rather wave and greet them while they kill me. Such a bad system that shouldn’t exist.)

Definitely do some Instant Adventures. That’s where you’ll find most of the leveling players and it’ll throw you into various types of group content.

As you don’t have ‘Build your own build’ as an option on your survey, I would like to vote that you build your own build instead, pick any 3 random souls, mix them together and have fun with it!
You may find this page helpful..

Also, with your IA or Quests question, you should do a mix of the two, start with your 7 IAs for the day and then move on to questing.
Be sure to try out the current ‘Featured’ IA queue for Carnival of the Ascended!

If you think the game is boring due to its streamlining, IA’s are just going to reinforce that.

Auspex is mainly Oracle, no? I imagine that will lose power over time as Oracle was the “true” support tree for clerics after Defiler got retooled and was no longer as good as a “healing support that does a bunch of damage” it once was. Defiler/Inquisitor also both have a fair amount of dots and Cabalist has some, but is much more AoE focused. My old Inq/Def/Cab build was managing like 4-5 dots plus a ton of other spells and it was pretty rad.

Prebuilt trees came…I think before Nightmare Tide? Or shortly after? They’re nice for a “hand-holded” experience, but you don’t have to use them if you don’t want to. Pick a prebuilt “set”, then just swap out any souls you don’t want and put points in wherever you feel.

The early game in Rift was made pretty trivial regardless of spec long ago. It’s a bit disappointing for new players I’m sure, but it was a huge relief to longer term players leveling alts who wanted a much speedier experience.

I can only imagine how unfun low level is with an empty game. Solo rifts were always bad and I imagine they’re just as bad now as they were years ago.

I’m not voting on the first poll because…why not try something new! You don’t need to follow any of the prebuilt trees, just pick a combination that looks interesting! At low level it really shouldn’t matter very much, stuff just falls over to a stiff breeze.

And like…I don’t even know how to vote on the second. If you’re looking for efficiency, IA’s are it. But holy hell do they get dreadfully boring after a time, especially if you don’t have a raid’s worth of folks in there. PORQUE NO LOS DOS? Poke around IA’s a bit, there are a few different flavors (open world zone, raid, maybe some event one? I don’t know nowadays) and you can explore some of the raid instances and whatnot so it’s cool. But it gets repetitive very fast too, which is a big bummer.

When I last played, you could just press a button to ignore the prebuilt archetypes and go back to the old system, it should still be in there !