With the recent news that Nintendo and Niantic will work together for more AR games based on Nintendo IPs, I thought it might be time to revisit an old conversation we all had the last time Niantic was grappling with a major popular IP. As readers may remember, soon after Pokemon Go launched, Niantic was tapped to tackle the Harry Potter IP for an ARG. I did a piece on both that and other IPs that would translate well in AR that’s aging pretty gracefully.

See, I predicted an HP game would require Niantic to get far away from its comfort zone because, well, Niantic makes certain kinds of games and doesn’t stray too far from that. I didn’t see its philosophy matching the Wizarding World setting, or even mobile games so much. People can measure success however they want, but going by Nintendo’s own actions, the game performance says it all. 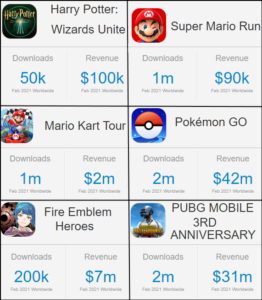 A game of numbers

As of February 2021, Wizards Unite is doing about twice as “well” as Super Mario Run if we’re looking at downloads to revenue ratios, which was not seen as great for Mario. Considering the ways players spend their money, and as seen via Fire Emblem Heroes‘ numbers and knowledge that it’s very much a gacha-game (if previously one of the more fair ones), Mario Run’s inability to translate downloads into profits apparently worked as proof that Nintendo too should use lockboxes and other unseemly mechanics to bilk players out of their money. We saw as much through the aggressive monetization with the Mario Kart mobile game.

While MKT’s profits certainly are an improvement compared to past failures, Niantic seems to be doing well with Pokemon GO without explicitly demanding spending the way the kart racer game does. POGO compares quite well with the traditionally well-performing PUBG Mobile, and while Niantic does make big, questionable mistakes, it has been doing better, especially during the virus outbreak.

I’m not a PUBG player, but I can argue that Pokemon Go and Fire Emblem Heroes do a few things right that Wizards Unite and Mario Run don’t: Chiefly, they respect the core points of their IP without over-monetizing the product. As much as I wish buy-to-play would work in the mobile sphere, it just hasn’t panned out to date. If any game could have made that work, it should have been a Mario game. Unfortunately, the runner-schtick might not have gone over well with core fans.

Pokemon Go left out trading, 1v1 battles, and customization, but it did have collections and battles, and it made those into a social event. FEH doesn’t quite have the same impact in terms of story, character relationship development, or punishing permadeath, but it did bring in tons of units, challenging tactical battles, cute dialogue, fan-focused scenarios, and great designs from a spectrum of backgrounds, from the typical prince hero Marth to weak old-man Wrys (the latter of which launched with some of the best healer abilities in the game).

As much as I love Nintendo console games and its earlier mobile titles (RIP Miitomo), the company clearly wanted assistance going forward. I’d also say that as much as I love Pokemon Go, Niantic often needs to understand why a title is effective and how to put that in the forefront. A sticker collection game really did the Harry Potter franchise no justice. Between the two, though, there may be something.

As a reminder, two of the five IPs I suggested in the 2016 article were Nintendo games. It’s not just because I’m a fan of those IPs but because I felt they could translate well to AR. Looking back over those choices, Niantic’s current tech, and what I’ve played first hand in other mobile titles, I’ll eventually revisit the idea of making Earthbound/Mother into an MMOARG, but before we do that, let’s talk about why Pikmin is actually a good start – for everyone.

Now, if some readers aren’t familiar with the Pikmin series, that’s understandable. It’s admittedly not one of Nintendo’s top performers. Looking over several lists of how the game’s financial successes compared to other IPs, we can see Pikmin tends to fall around 20th at best, even against unused IPs. I have a feeling if the series hadn’t been created by Shigeru Miyamoto, it may not have turned into a franchise. It’s not that the games are bad or unprofitable; I’ve just never seen much of a fandom for the series. In fact, I tried searching for lists of best Nintendo IPs and Pikmin didn’t seem to come up, though general Reddit fan-lists seem to include the game. I’m not saying it doesn’t exist, but perhaps Pikmin fans aren’t quite as passionate as some other fandoms.

That may be a good thing, though, as it allows for more flexibility. That’s certainly one thing the series has going for it, as the easiest way to summarize it might be as a collecting game: rocket ship parts, “treasure” (human stuff), or food, depending on which game you’re playing. In fact, I’d argue that Niantic could take Wizards Unite as is, gut the potion-making, redo the classes and talents to be Pikmin types players invest in, have bosses give rare items, and change the battle tracing encounters with pikmin guiding tracing, and be done. Throw pikmin into Tonehenge puzzles and adapt the Hololens demo at some point for a group of the little critters to follow the player and boom, you’re got a recognizable Pikmin AR game that follows most of the same basics as the series to date.

And since the series doesn’t have much of a strong core, Niantic can throw in different themes and challenges without worrying much about lore: trash collection for environmental promotions, collecting presents for gift giving holidays, or maybe PvP could be more of a resource collection like Pikmin 3‘s emphasis on food supplies… there’s a lot of flexibility. And because the series is rather modern, Niantic could actually help with cross-IP promotion as it did with the amiibo in Hey! Pikmin. 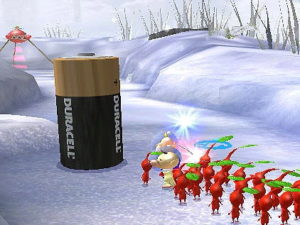 Not only that, but Pikmin has already been used for easy-to-localize in-game advertising. Other Niantic games advertise as well, but the results are often quite mixed. If Nintendo’s already done it, it seems safe to say that Niantic may even have been given the IP because it’s safe to do.

I’m sure Niantic will still need to check in with Nintendo, but compared to managing the specific look, feel, and lore of 898 pokemon (not including gender differences, shiny variants, or non-main series adaptations, like Detective Pikachu or the Squirtle Squad squirtles), Nintendo really is giving Niantic one of its most flexible IPs to play with.

Now, I’ve honestly only played the first game to completion and only demoed the second and third titles, but given Niantic’s usual formula and Pikmin’s IP recognition, I feel certain that Niantic’s adaptation will end up more on-brand than the Harry Potter adaptation, and it’ll probably be more profitable too. It plays to many of the company’s natural strengths, and Nintendo most likely won’t need to work as hard as The Pokemon Company to ensure brand integrity.

That being said, this is also the first game Nintendo and Niantic are working together on. I still think Animal Crossing could make a good AR game if done right, but something akin to what I previously described probably is beyond Niantic’s ability for now, mostly due to the fact that Niantic hasn’t tackled housing or persistence beyond creating maps recycled for each new game. My Earthbound/Mother suggestion, however, is more relevant than before, especially given Niantic’s new demos and best practices. The series is less flexible than Pikmin, but perhaps more iconic. While it’s less profitable than Pikmin, the series has suffered from some creative issues in the international world that a US-based company would have an arguably easier time tackling, which we’ll discuss next time.

3/31 Update: There is a supposed leak on Reddit mentioning the new Pikmin AR game’s features. We’re working on verifying the information, but it does seem to follow the basic collect stuff formula, as well as adding customization and a co-op planting mode.