Even though I’ve logged a total of 112 hours of Elite: Dangerous at the time of this writing, I’m still pretty much a noob in the grander scheme of things. I’ve only just recently gotten into core mining. I’ve slowly started to crawl up the Trader ranks towards Elite status. I still haven’t really gotten to the Guardian gear or unlocked many Engineers yet. There’s a whole lot to experience, learn, and master yet.

But that hasn’t stopped me from one of my favorite pastimes when it comes to this game: internet spaceship theorycrafting.

I was turned on to this all-encompassing delight when I was pointed to the direction of sites like Coriolis, and more recently, EDSY. Together, these sites have allowed my imagination to flourish, helped me plot out the sort of ships I want to go after, and just overall encouraged me to have fun tinkering in the lab when the inspiration strikes to answer a question of “what if” in terms of a build. It’s that internet spaceship mad science that I want to share with you all in this edition of Stick and Rudder. 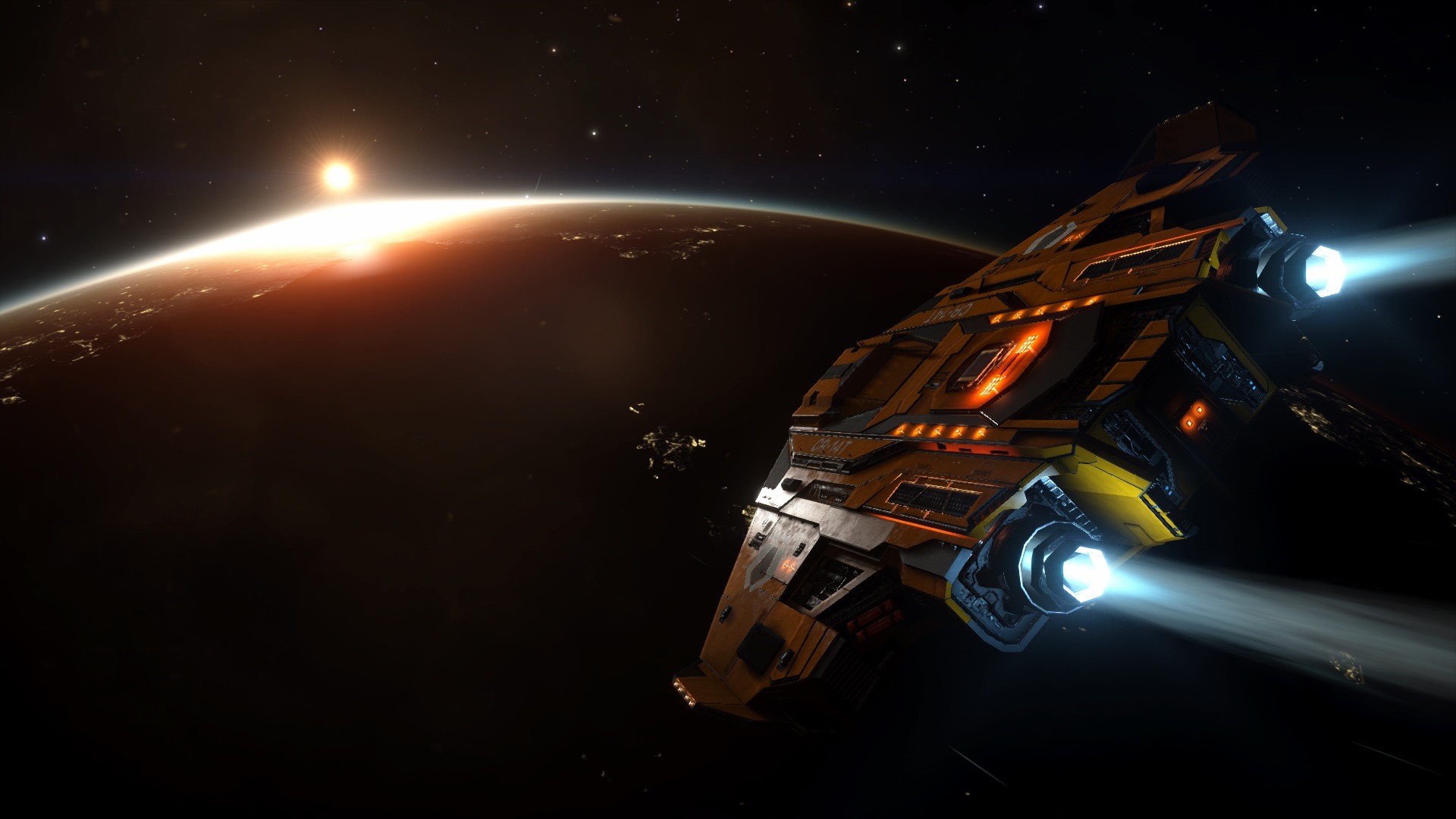 Before I unveil all of these creations, I do want to point out a couple of things. First off, none of these builds is what I’d call practical; they all require a great deal of investment in terms of time, credits, materials, and unlock grinds in one way or the other. Secondly, I’m not really sure that these ships would be good to take out for things other than PvE, if they should be taken out at all. Finally, none of these has been actually built yet or field-tested — I’m totally just theorycrafting for fun.

So what’s the point? Ultimately, all this was meant to be was an exercise of the imagination – an attempt to see if some completely random ideas for a type of ship, a form of combat, or an overarching theme would end up making an intriguing internet spaceship. All that said, these bits of EDSY tinkering have gotten a once-over by my good friend and in-game mentor Britarnya, so they at least pass a bit of muster.

Without further ado, here are the five stupid yet possibly fun ships I’ve whipped together, complete with absolutely goofy names. Because that’s just how I roll when it comes to Elite spaceships. I’ve included links to each ship’s EDSY build page, or you can click on each image below to expand the build details. 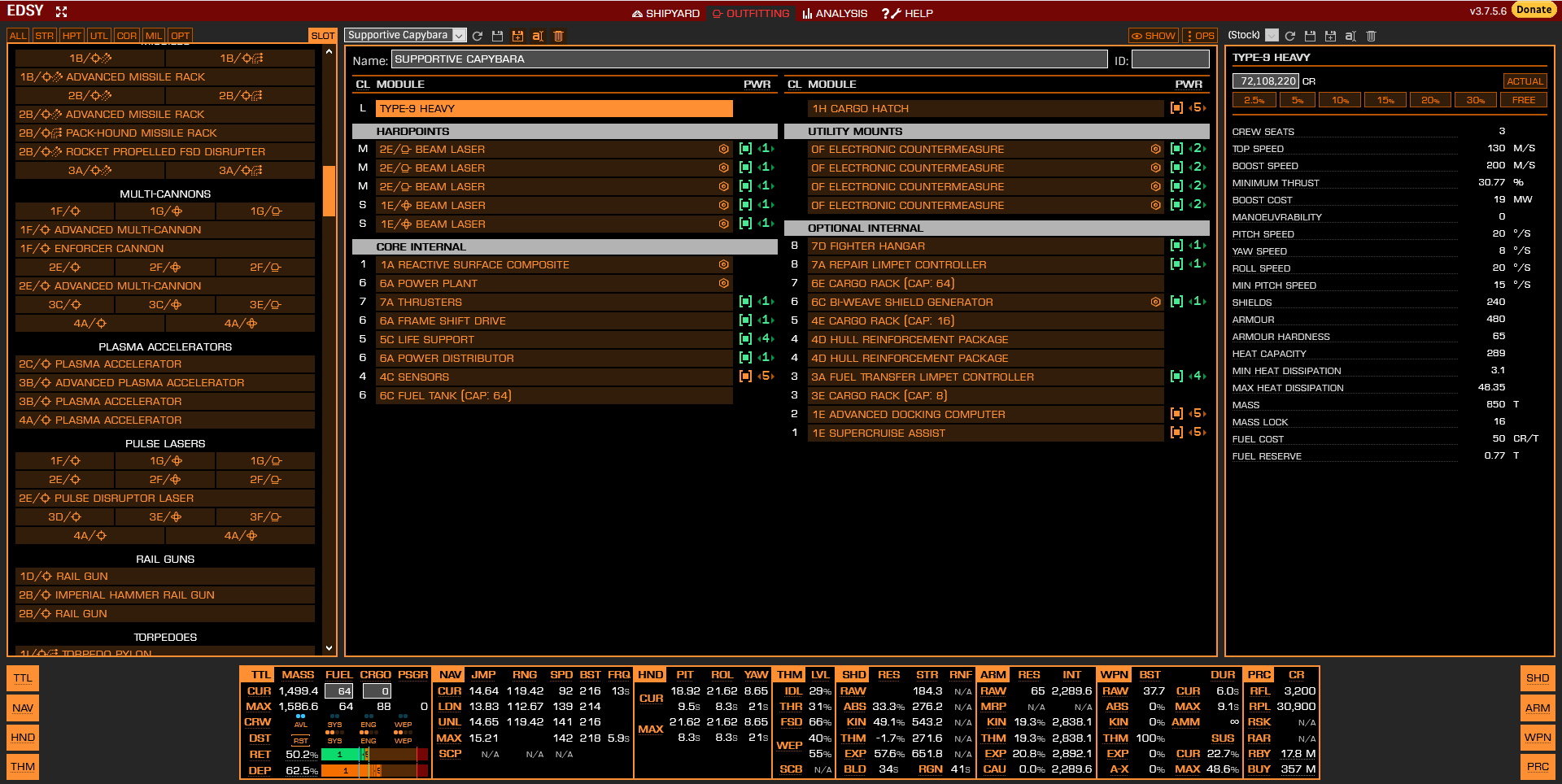 This Type-9 build idea is what launched this whole little project, after Britarnya informed me that there was a way that beam lasers could be used to regenerate friendly target shields via Engineering. I went whole hog on the idea of a pure back-line support ship, mounting five of these types of lasers, some ECMs to disrupt hostile missile locks, some repair limpets to help repair friendly targets, a hefty fighter bay for fire support, and even some fuel transfer limpets in case wingmates run out of gas. Naturally, this ship is best played with friends, and having another person controlling the turrets would probably be ideal. 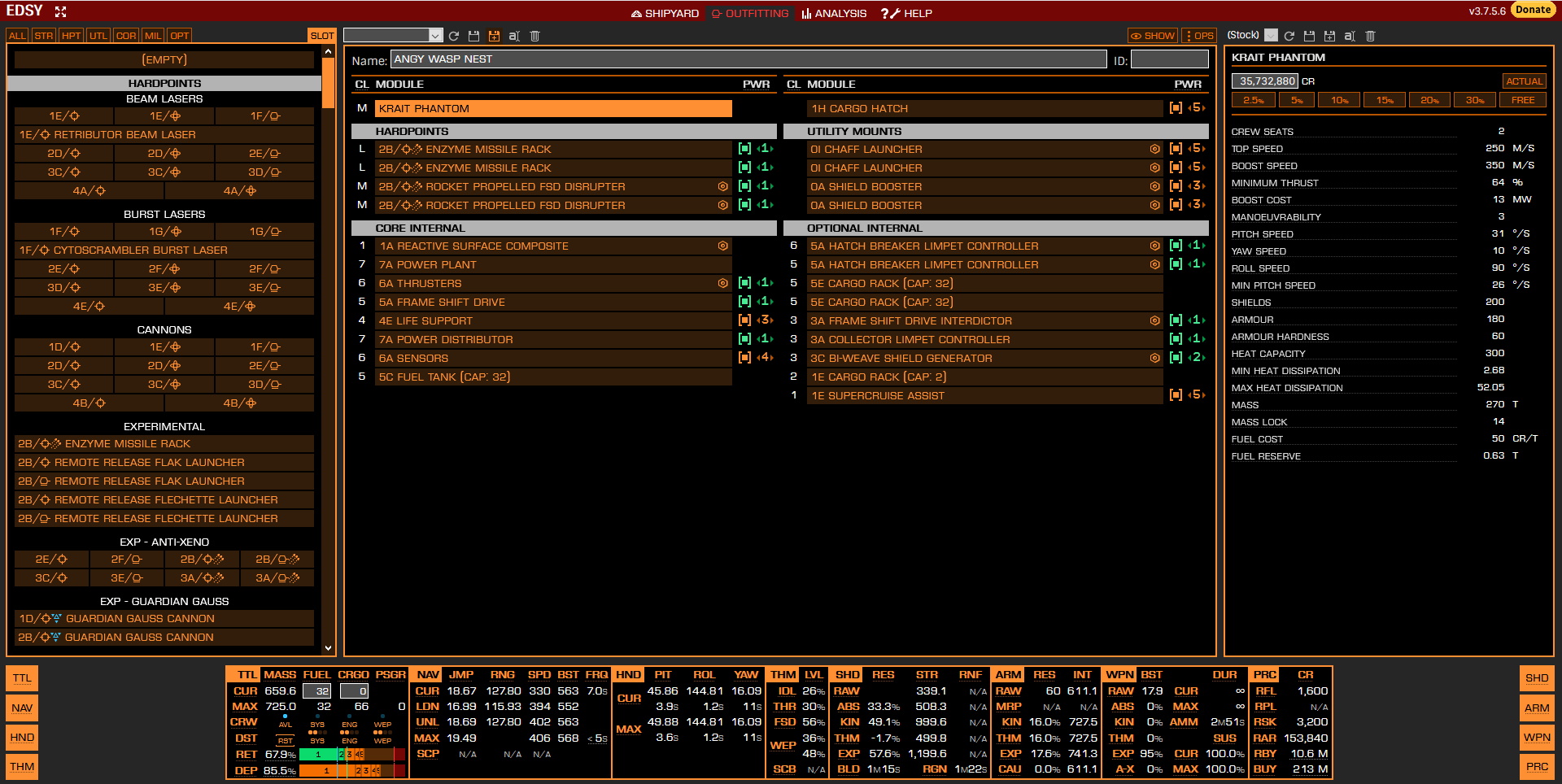 This Krait Phantom is built with piracy in mind. It has the usual pirating pieces of kit like an FSD interdictor to pull targets out of supercruise and a bunch of hatchbreaker limpets to crack open ships and plunder their cargo holds, but I also leaned into the idea of “stinging” with rocket-propelled FSD disruptors and some enzyme missile racks to sort of mimic venom. I’ll be honest, I mostly built this ship because the name amused me, and I decided to run with the theme. 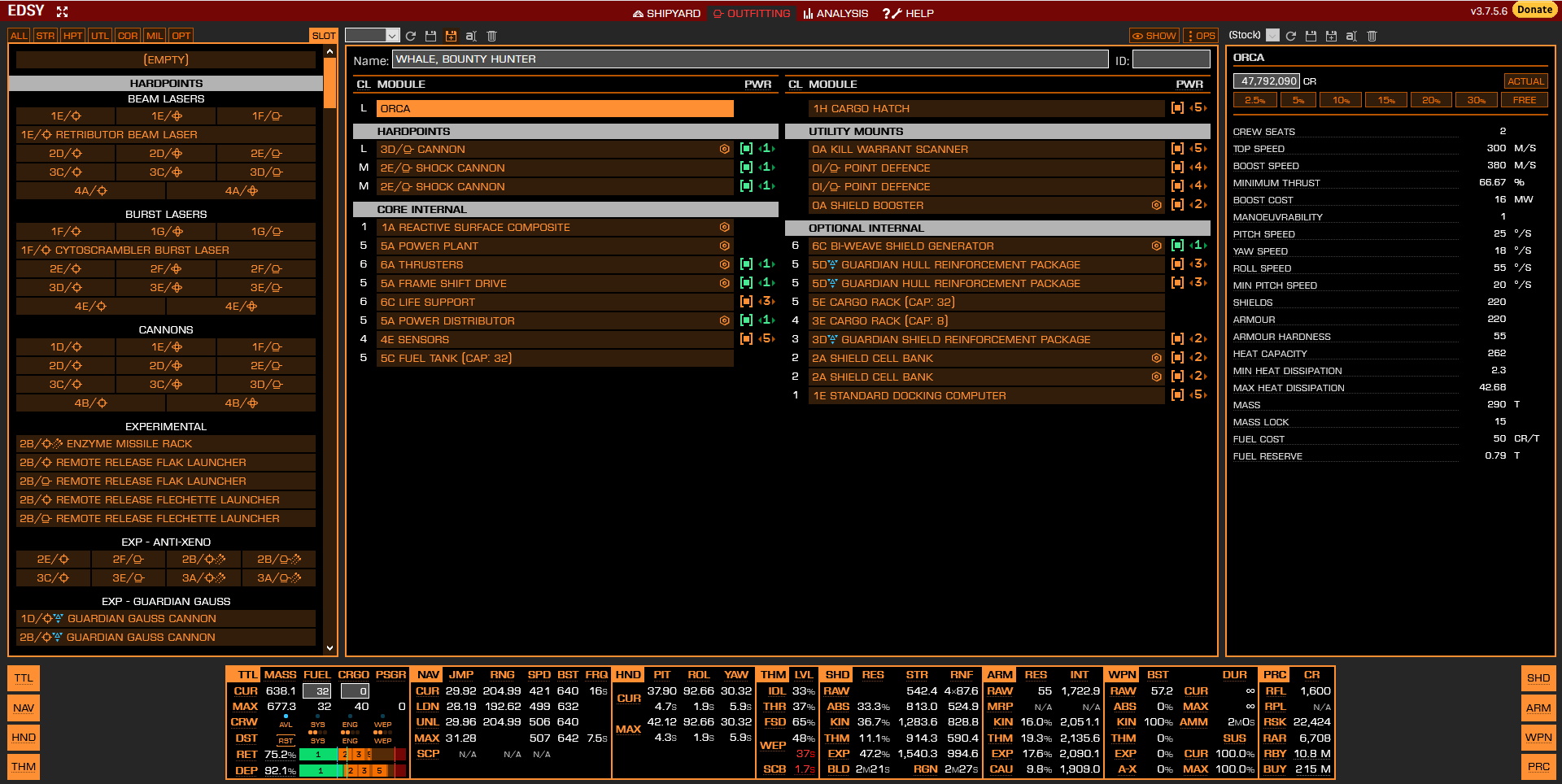 While I’m not exactly one who has his finger on the pulse of the Elite meta, I’m hard-pressed to believe that the Orca luxury liner is the first thing people think about in terms of combat builds. This was a personal challenge to turn this lovely cruise ship into a big ol’ combat vessel, with some entertaining looking weapons and what I think ended up being some pretty stern defenses. After all, why should Gutamaya ships be the only classy-looking spacecraft able to pick a fight? 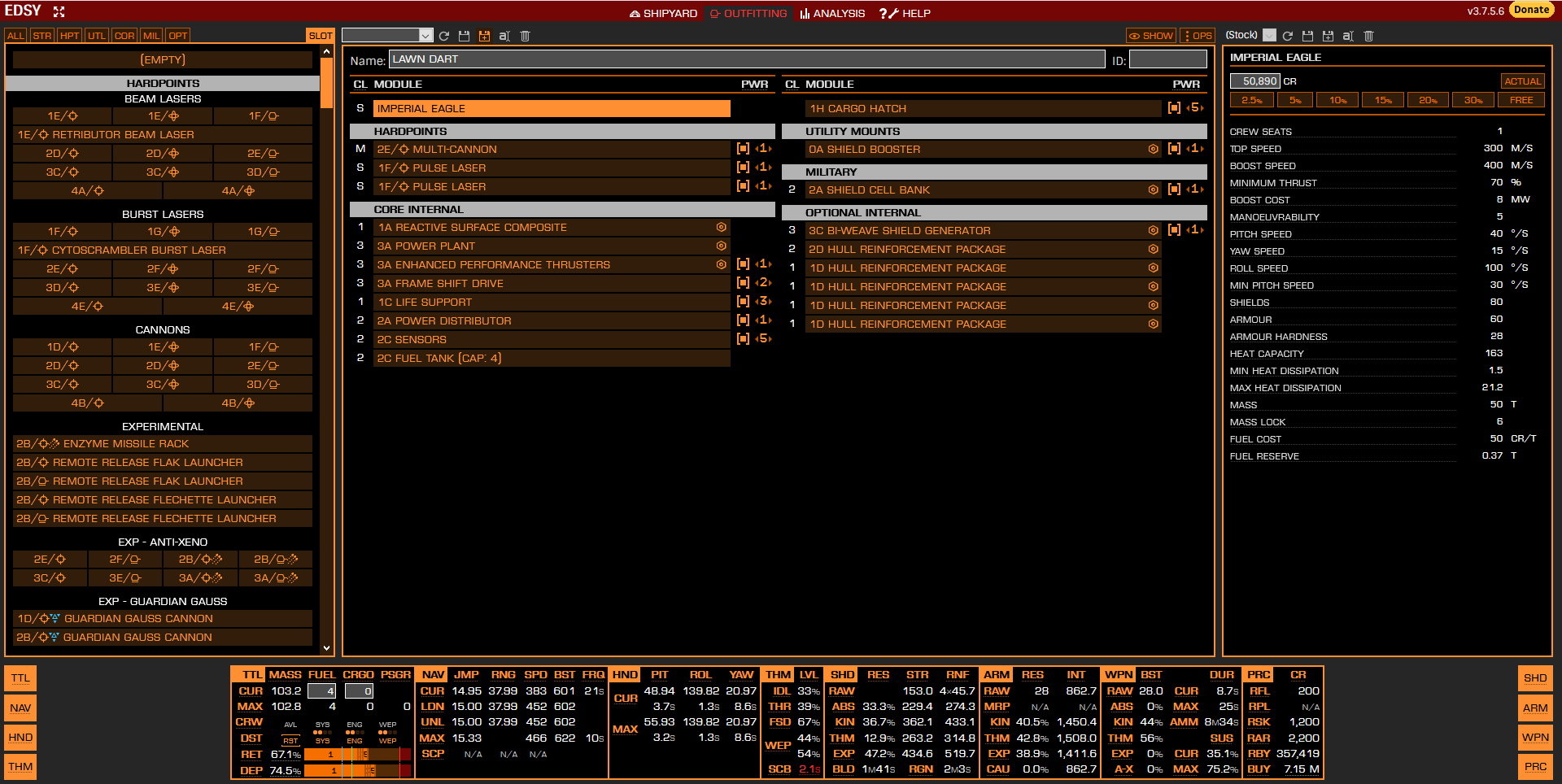 Conversely, I wanted to turn one of those pretty little Gutamaya ships into a throwing weapon. This Imperial Eagle build was an attempt to balance heavy armor with the ship’s excellent speed and maneuvering to ram into other ships. As its name suggests, this is meant to be flung into enemy ships with all of the abandon and carelessness of those most dangerous of backyard toys. 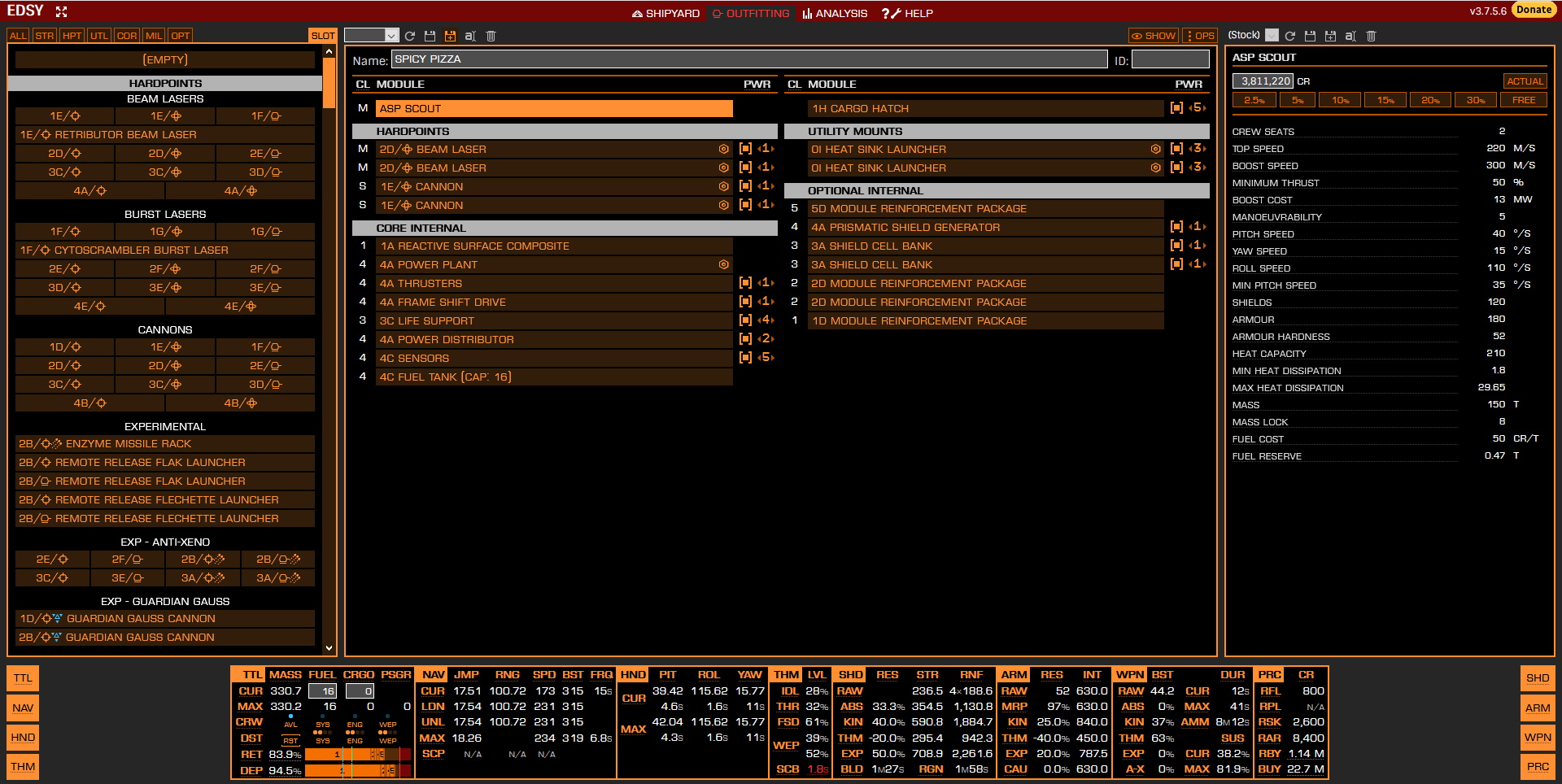 The idea for this Asp Scout was spawned once more by the ship’s silly name as well as my investigations into how silent running and “stealth” works in Elite. While the overall opinion about stealth builds appears to have soured from my research, the idea of transferring heat via weapons fire was still an intriguing angle that I wanted to go for. As such, the Engineered weapons are all about bringing that heat to your target to make ’em burn, while some heat sinks are installed in case things get too spicy for the ship.

I would have called the ship Trogdor, but I don’t know how many people would have gotten that reference anymore.