So, before we begin, this is what happened with one of the polls: a dead-even split between doing Instant Adventures and following the breadcrumb trail. Thanos is pleased. But more than that, it did give me the opportunity to do what was suggested in the comments and just do both things. So that’s what I did this week in RIFT. Though more of one than the other, by far.

When I first started on this week, I decided to join in on the Carnival of the Ascended anniversary event that’s going on. I figured this would be a pretty quick queue and would give me a good “starter taste” of Instant Adventures. That’s right, I’ve been away from RIFT long enough to remember when IA’s weren’t a thing.

For the most part, this Carnival was a good intro to how things worked. It’s basically a raid-sized group doing public events, which kind of recaptured some of that launch day magic I had experienced when I was running with a bunch of others in the open world, closing rifts left and right. The tasks themselves were light, the XP was flowing freely, and the rewards were so numerous that my meager little inventory bags were bursting at the seams with stuff. The event itself, however, was mediocre at best. It had a few steps that continued to loop around and around, and the whole thing was narrated by your cookie cutter swindler circus ringmaster sort.

After a few laps I started to get a little bit bored as well as needed to collect all my goodies. And trust me, there were a lot of goodies: gobs of healing food items, a bunch of things to add to my Collection, a plethora of horrifying pets, and several costume pieces. By the end of my run, my character ended up looking like a shepherd mage that doesn’t understand how shirts work. 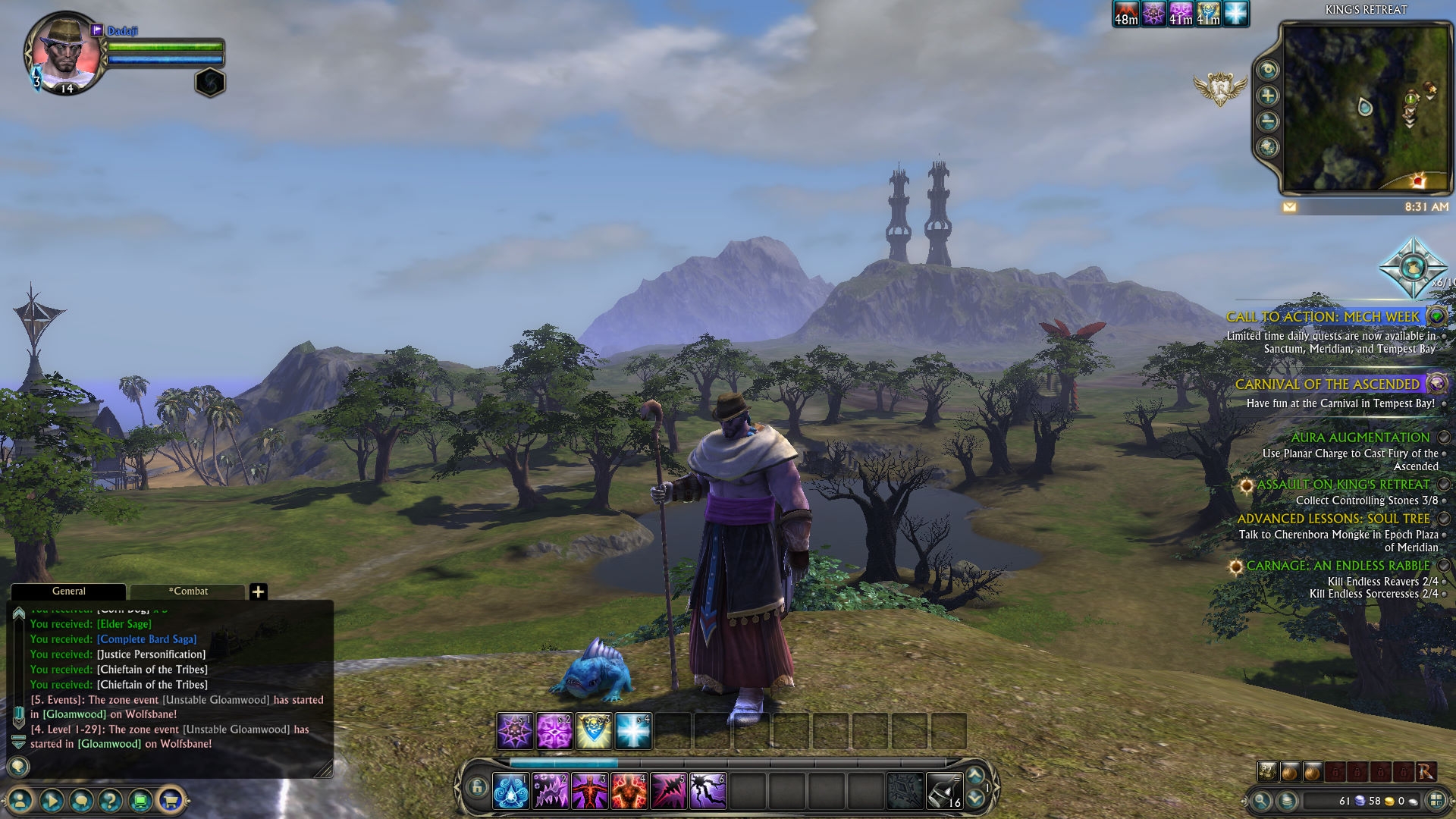 Once the Carnival laps were done, I decided to do a few more of the quests and close a rift or two to sort of refresh my brain. The silence in comparison to the IAs was deafening. The abject lack of people was extremely depressing and I soon ended up starved of that ambient multiplayer feeling that I crave in MMOs.

So I queued up again, this time for a regular IA queue. I wasn’t expecting this one to be too active, but I once more wasn’t left waiting for too long, and once again things sort of rolled along like in the Carnival, though the objectives were (naturally) in locations in the open world. While things didn’t really loop back around on themselves, they did have a sort of similar cadence of steps – kill things, close a nearby rift, do a couple more interactable things, kill more things, and then get ported to the next area. And while these weren’t as rewarding as the Carnival in terms of goodies, they were good for XP. 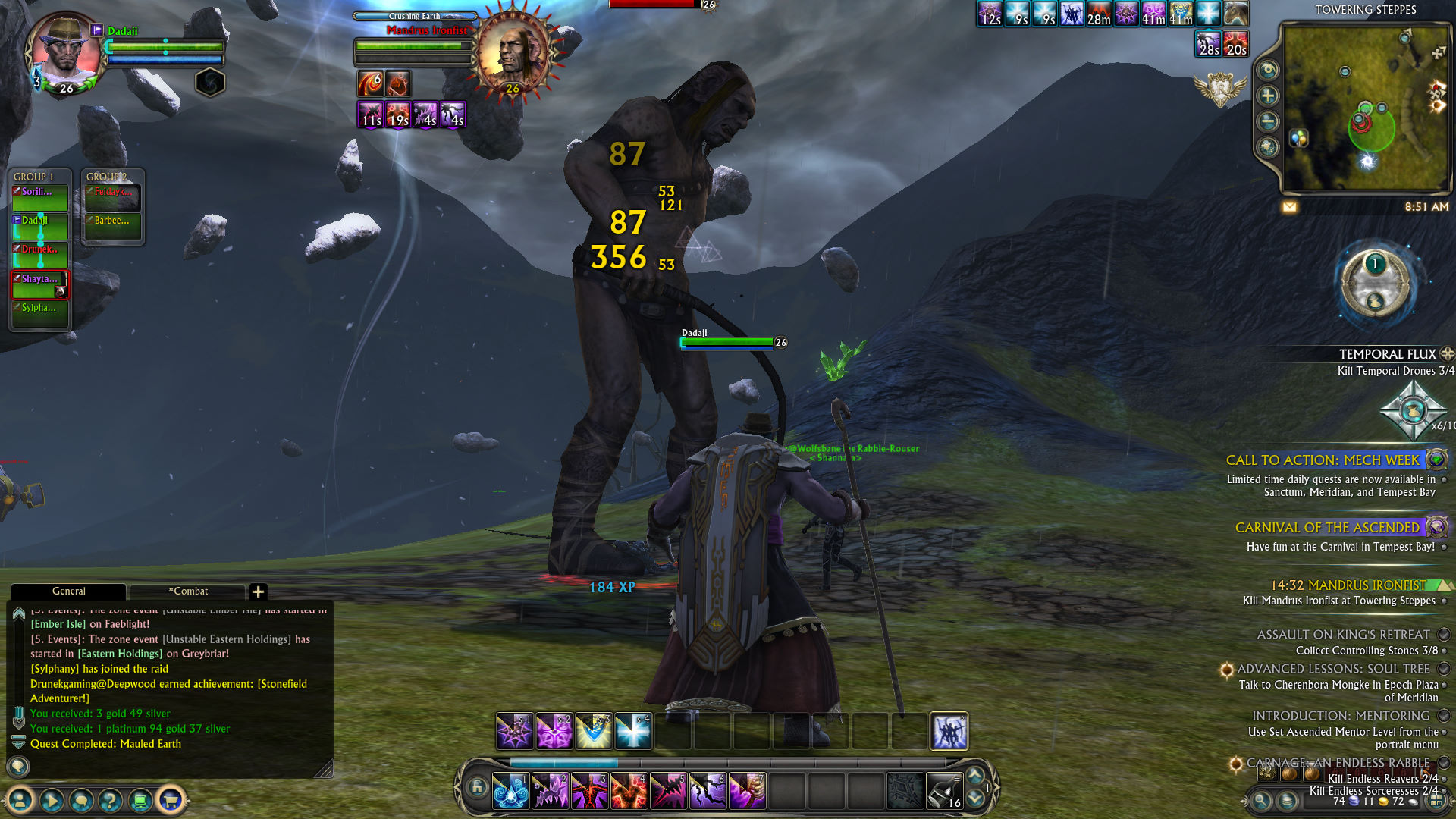 Overall, the regular IAs were fun, but the party size was also a whole lot thinner, consisting of only a few people instead of a small mass like at the Carnival. So I suspected that perhaps the Intrepid Adventures would be a bit busier.

Boy was I right. The queue pop was instantaneous, the number of people taking part was a whole lot larger, and the adventures themselves, while they were generally similar to regular IAs, felt a little more interesting. Mostly because I was going through what felt like a mini-raid in terms of location and monsters.

I bemoaned the refinement and river pebble-like smoothness that leveling up my NecroCleric turned in to, but Intrepid Adventures are refinement that I appreciate. I was scaled up to appropriate high-level stats so I could actually contribute even with my meager gear, the fights against larger beasties had a couple of light mechanics that helped keep interest high, the XP earnings almost felt like cheating, and once again there were a lot of people coming together. 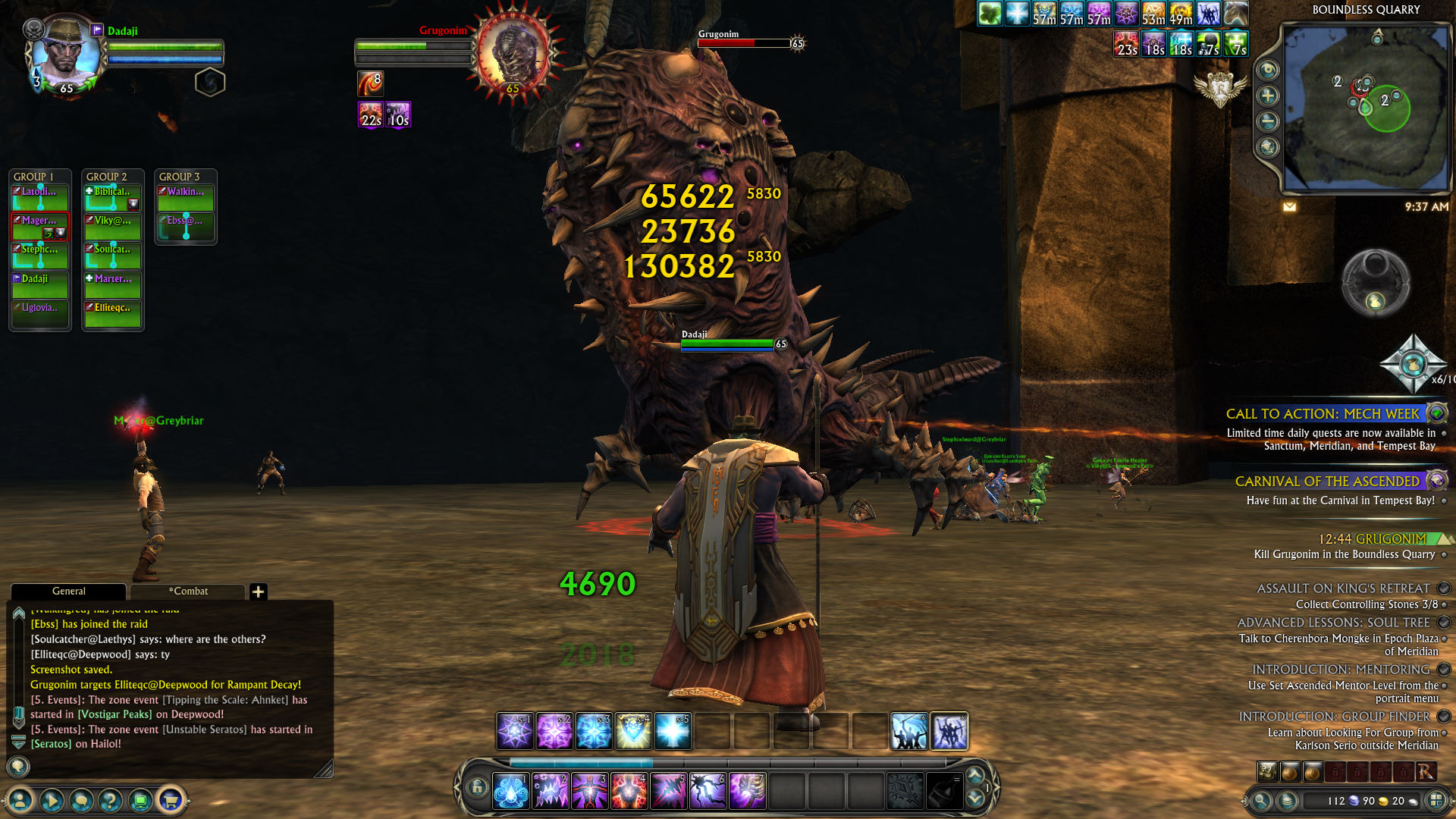 It all felt super good. In fact, I’m perfectly fine doing this over the breadcrumb trail any day of the week. Hours slipped by without my notice as I was left to completely ignore whatever story quests were waiting for me and I was able to help slowly whittle big foes down and buff teammates. RIFT really feels like a whole new game with this system, even if the whole thing was the MMO gaming equivalent of sitting blankly in front of a TV screen and mindlessly crunching on a bag of snacks. Really, I just wish that some other PvE MMORPGs would rip this system off and improve it. Imagine, just being allowed to adventure and not worry about some overarching “epic” narrative.

So, yes, my mind is kind of made up with regards to what content I should be doing for the rest of this run (pretty much), but there are still a couple of poll choices I can come up with for this week.

First, I’m kind of asking the same question I did last week with regards to class choices, but this time I’m narrowing down the choices between keeping up with the NecroCleric or using a linked-to calculator to plot a new course. I promise this will be the last poll I post asking about class focus.

But seriously, what class should I stick with for the rest of this month?

Second, I apparently still have an old Warrior character sitting in my character list, and I sort of want to see how she feels in comparison to my NecroCleric. So that seems like a reasonable poll question, don’t you think?

Which character should I stick with this week? 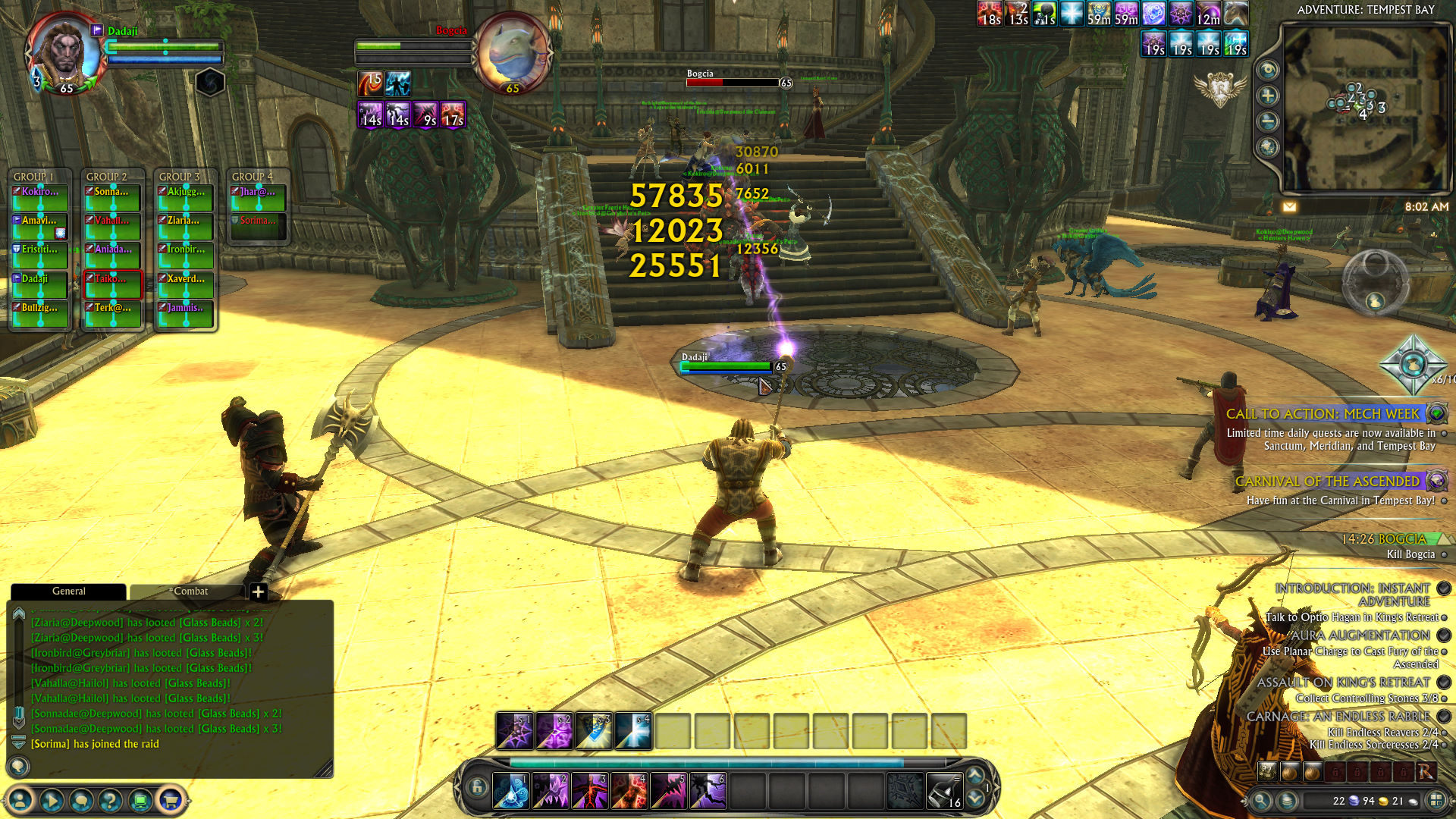 As ever, polling will close up at 1:00 p.m. EDT on Friday, April 9th. In the meantime, I think I’ll open up another bag of MMO junk food and crunch some more IAs. Num num num.

Just started playing recently and was about to give up as the overland quests just didnt grab me. Will give intrepids a try.

I haven’t played Rift since Storm Legion, and I doubt I’ll play it again but I do remember the IA feature being a great way to level. MMO’s are all about socialising and grouping people to get things done is conducive to that, definitely one of my favourite features of the game alongside Dimensions.

Since the main feature is build yer own class, it makes sense to go for a deep dive.

IA seems to be the only place where you see other players if your not max level.

Probably because the new player rate is really low. This game really hasn’t aged well and the F2P shenanigans they later pulled were really bad.