Pokemon Go’s finally getting back into the swing of things. While mini-events have been on offer in the past, May looks to be returning to longer, meatier events, complete with more accessible player participation (perhaps as a result of the recent Sustainability Week failure).

May 4th through 17th will be the Luminous Legends X event, a Fairy/Dragon-heavy event bringing new Pokemon Spritzee, Swirlix, and Goomy into the wild and legendary Fairy-type Xerneas to raids. None of these will probably be meta-relevant pokemon for raids unless Fairy gets a new fast move, but they could have PvP uses. A new kind of lure, Rainy, is being added to help Goomy reach its final evolution that requires the lure or rainy weather, plus Dragonite and Salamence will be able to get their traditional Community Day moves again via evolution or Charged TMs. This is actually a big deal, as normally this can be done only with the rarer Elite TMs. We’ll also have a timed research giving us many of the new pokemon plus lure, and if players catch enough Fairy types by May 11th, the rest of the event will grant triple XP on catching, introduce Fighting/Dark Pangoro’s baby form Pancham to raids, and maybe make Galarian Ponyta (found in raids, research quests and the weekly breakthrough, plus AR mapping).

And this is just the first May event! 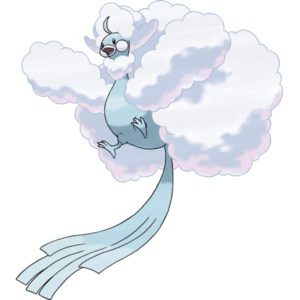 May 15th at 5 p.m. local time – right after the next Community Day – will see the release of a new Mega Pokemon. While there’s currently no pokemon listed for this, I have a few guesses. The most obvious would be a Swablu CD, followed by the release of Mega Altaria, as it’s a Dragon/Fairy type and fits perfectly with the overall event theme. Mega Garchomp may have a slight chance as it’s a Dragon-type and a rather popular Pokemon with a Mega form sure to get players coming out in groups once again if that’s Niantic’s aim, and of course will get players to open their wallets for raid passes in ways most Megas have failed. However, this all assumes Niantic wants to tie Community Day and/or the new Mega with the overall theme it’s got going on. It could instead just do some unrelated picks.

4/29 Update: I was correct. While dataminers had found hints at a Swablu Community Day, Niantic has announced it officially, as well as Mega Alteria being released after the event. Its CD move, Moonblast, is a slight upgrade, but I’d argue its Fairy/Dragon typing is what you may want to pursue for some extra Fairy and Dragon candy for the rest of the event.

On the other hand, spotlight hours (every Tuesday from 6 to 7 p.m. local time) seem to be following the themes. May 4th will be Cottonee with double catch candy, May 11th will be Dratini with double transfer candy, May 18th will be Alola Rattata with double evolution XP, and May 25th will be Marill with double stardust. May 4th is a good day to use your Meltan box if you don’t care much for Cottonee, while May 11th is great for your dragon catching badge, quests, and a fairly useable Pokemon and May 25th is good for stardust and any PvP enthusiasts who want a good Azumaril or to power one up for PvP.

For Rocket fans out there enjoying the bad guys’ return after nearly a month of being broken, the Luminious X event will also kick off a Rocket event paying off with Shadow Moltres.

Naturally, if we have an X event for Gen 6, there’s got to be a Y event, and Yveltal will get its Luminous Legends Y event from May 18th through 31st. We know it’ll feature Dark-type pokemon in the wild, Yveltal in raids, a challenge event, and something with Team Rocket, but that’s all for now. As usual, we’ll update this post throughout the month, so you may want to check back every now and then.

5/10 Update: Niantic’s dropped more news on the Luminous Y Event, and it’s a doozy. For one, I’d recommend doing a Pancham raid starting May 11 or shortly after, well before May 18, as Pancham will then move to 12k eggs. 12k eggs are a pain to earn and blow through, especially if you don’t buy incubators, so at least for collection purposes, you may want to grab one. Early analysis seems to indicate it’ll be similar to Scrafty in the Great and Ultra leagues, but can actually compete in Master League, something Scrafty cannot do. If you’re into PvP, you may want a few to trade for a chance at reasonable VIs (remember, lower attack tends to be better).

Niantic also noted that things are about to change with Team Rocket. The bit about “new types” probably means we’ll finally see Fairy Shadow types, but the rest is anyone’s guess. I’m guessing we may have multi-encounter Rocket battles, similar to when Jessie and James appeared in their balloon. Or, perhaps this may be the introduction of doubles battles. We’ll just have to wait and see. 5/18 Update: The change appears to be Grunts attacking in consecutive order like Jessie and James, making it easier for players to fight leaders and get 12k Strange Eggs.

The event is broken up into two parts. Part 1 is May 18-24, which is when Yveltal enters the raids, Pancham goes into 12k eggs, Dark-types will spawn more, the previous new pokemon (Spritzee, Swirlix, and Goomy) will still be in the wild, 7k eggs should be avoided (unless you want a good Sneasel or Alolan Grimer to evolve), Scraggy coming as a task reward, and most importantly, you can use Charge TMs to remove Frustration from Shadow Pokemon! These events are not common, and we’re getting a whole week to do this, so plan accordingly.

Starting May 15 though, you may want to beat up some Rockets. If the playerbase defeats enough, we’ll unlock 3x Catch bonus, Galarian Zigzagoon in raids, and permanent chances for GZ to be shiny (so the raids will be somewhat tempting) from May 25-31.

Part 2 of the event will be May 25-31, and is, well, Eevee themed. Sylveon, the Fairy-type Eevee, will be available to evolve by earning hearts with it as your buddy, though the specifics haven’t been revealed.

5/25 Update: Sylveon is live. If you name an Eevee “Kira,” you can immediately receive Sylveon but the trick only works once. The traditional method is to have Sylveon as your buddy and earn 70 hearts with it. If you can get an Eevee excited and get the full hearts on all but the bonus and “New Place” categories, it would take you about 4 days to prepare a fresh Eevee for Sylveon evolving.

In both scenarios, do not evolve Eevee until you see a silhouette of the Eeveelution you want. Ignoring this warning ensures that you will get the wrong form. As for the Fairy fox’s use, it seems most useful in Master League from current PvP analysis, though keep in mind that you’ll probably want the Community Day move Last Resort, meaning you should either prepare an Eevee for an event allowing access to the move or be prepared to use an Elite Charged TM to gain access to it. For non-PvP fans, Sylveon doesn’t look like a great option. While some may consider it a good budget Fairy, 70 hearts is a lot of work. Granbull is a solid pure Fairy alternative and requires far less work to obtain.

The flexible little fox’s other evolutions will also appear in raids and tasks, and there’ll be some Sylveon inspired stuff in the clothing shop. Dark-types will still spawn, but Goomy will not. 7k eggs will be Fairy themed (and include Eevee), but the big point is that Togepi will return to them. Its final form, Togekiss, can be fairly useful in League battles, and deals quad-Fariy damage to Pangoroo, so PvP fans who are lacking a decent one may want to walk a few 7k eggs if the panda-pokemon starts taking over the meta scene.

There are also a few corporate sponsors offering event tickets. Tickets cannot be purchased unless you live in Japan and visit Yoshinoya, or wait and see what 7-11 Mexico’s social media is up to. It’s frustrating that this is a Deino event that most of the player base will miss, but Niantic’s building a history of this. The only bonus for non-ticket holders is that from May 28-31, the trade distance will be increased to 40km again. Since ticket holders have an increased chance of activating the Lucky Friend status, perhaps you’ll trigger one with a participant. Though, considering the measly 40km distance, your best bet would be courting friends who do the event via Verizon.

Every Monday will include a free gift box with a Remote Raid pass. While the X and Y mascots’ impact on the raid and PvP metas aren’t well defined yet, they are among some of the more popular Pokemon, so there’s sure to be excitement about them.

Finally, it’s a little early, but Niantic has announced this year’s Go Fest dates as July 17th and 18th. Niantic hasn’t released much beyond the dates; we’ve asked about COVID handling, accessibility, and the ever-important storage concerns, so we’ll keep everyone updated as we learn more.

Update 5/3: Hope your mom likes Marill, because it’ll also be a Marill event. Special Timed Research Tasks will be available from 8am to 10pm. While we’ve been seeing this pokemon more, despite the nice shinies its family has, it’s a top tier pokemon for PvP and a reasonably useful gym defender for slow-decaying gyms.