Last week’s community challenge to represent music from MMOs in picture format was picked up in a variety of interesting ways, including this one of what looks like a half-woman, half-dragon getting ready to make a giant cobb salad.

“I downloaded Guild Wars 2 again,” said SmiteDoctor. “Something musical? How about the orrery in Divinity’s Reach representing the music of the spheres (yeah it’s a stretch, not even sure if they make noise but whatever).” 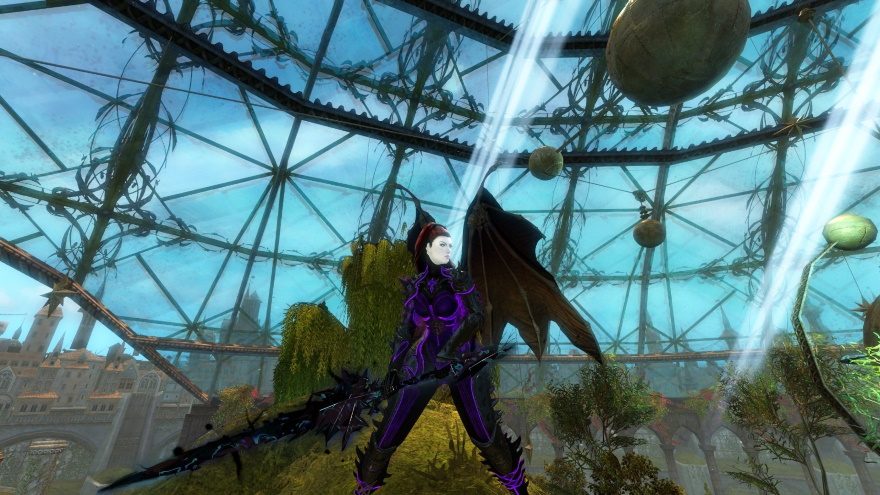 Or, if you prefer, Final Fantasy XIV’s practical two-for-one Enspirited Lutebow, courtesy of Vincent. I’ve always thought that more orchestral instruments should have a dual function as a deadly weapon. You know, like a piccolo blow dart or sonic drums of doom. 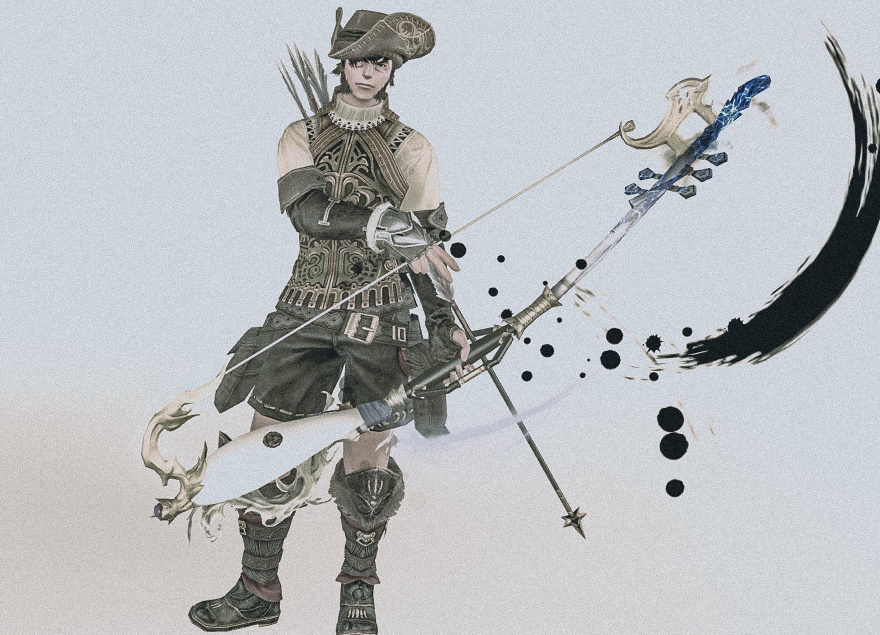 “Enola Gay, you should have stayed at home yesterday…”

Utakata took this picture of some Jacob’s Ladder rays beaming down on World of Warcraft’s Revendreth. The light! It burnsssss! 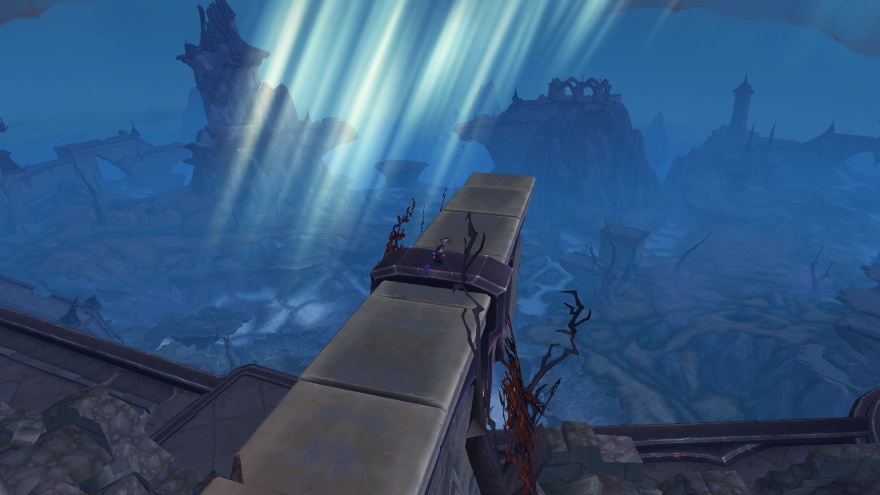 “I had logged in to FFXIV to just hang out in Limsa when one of my Free Company mates tells me about a band performing in New Gridania,” said Vgees. “So I hurry over there and find this group of Bards performing in chicken suits! They were quite good! Here’s a video of them playing, It’s Raining Men. Sadly, I did not find out who they were before they left.” 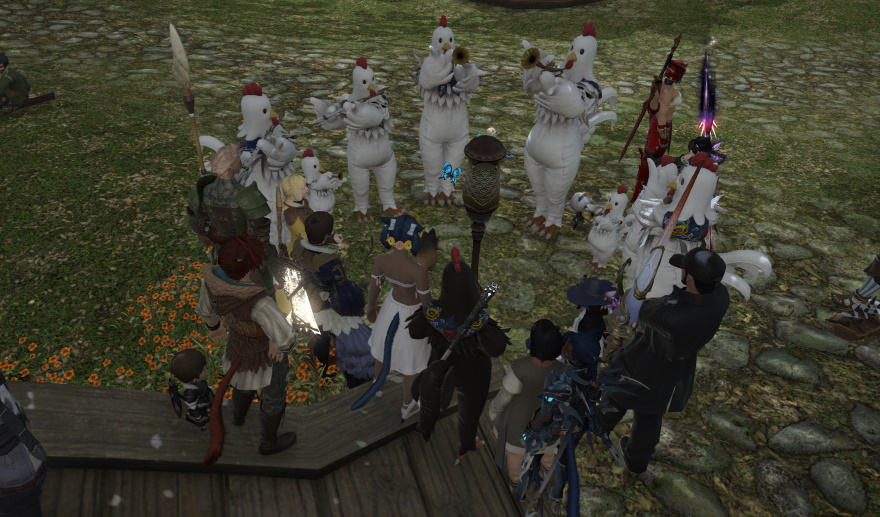 “In the plant base in Giddy Park (Plants vs. Zombies: Battle for Neighborville’s main hub), there’s a piano you can jump on to play music,” said IronSalamander. “It also has an achievement associated with it, and a secret button that changes the musical notes to silly sounds!” 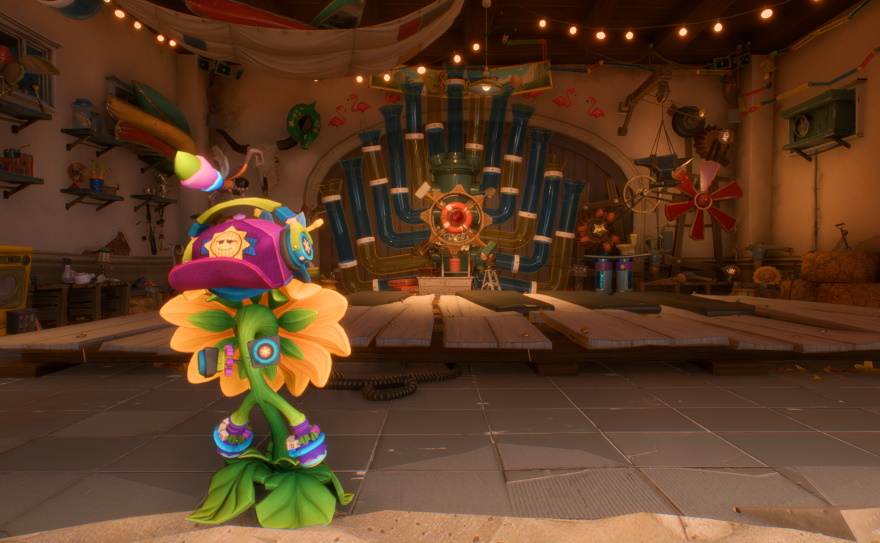 And now we turn over the show to you! Post any great pictures of exploits in the comments along with your descriptions, or if you prefer a challenge, then give us a grand picture of a windmill or waterwheel in an MMO!

I think there’s a storm brewing above the land of halflings.

I started playing an ungodly amount of LOTRO recently and…i guess this is how people felt something like 12-13 years ago but, better late than never right? lmao

With that silver we scored, we all got glowy new bows, so we detoured briefly from joining the rest of the team to murder our way along a random shoreline, just viking stuff. Then we topped a ridge and were afforded this stunning view.

Evri spotted it first, as usual. “Village.”, he rumbled.

“Spike traps.”, I offered in agreement.

…so we fortified the tower and sent Evri (as usual) to bait the goblins onto our spikes while Ket and I murdered them with arrows from a safe distance.

Then we waited for nightfall and pulled the remaining guards into a bog and murdered them with arrows from a safe distance.

Finally we looted the village, murdered the pitiful few who remained cowering in their stick huts (again with arrows) and destroyed their crops with a big damned pike. We took the head of the biggest goblin brute — a rare trophy.

Then we killed a dragon.

Then we summoned Yagluth from the great beyond and demanded he pay up the beer money he owed us. I took a death negotiating that collection when I discovered that radiant death beams can carve through pillars like a gerbil chewing through a toilet paper tube.

But we won, and hung his head with the others, winning Valheim, for now.

(Sorry for the spam)

PS: Thanks to plugging my contribution again, Mr. Justin.

…but the FYI on my caption for that was reference to OMD’s, Enola Gay:

It was the only thing Bard I could think of, since none of my characters carry musical instruments with them in regards to last week’s theme. >.<

The Goblet in FFXIV has both, along with some lousy weather. Rarrrgh!

This windmill is in the plant base of BfN’s Giddy park above the train that takes you to Mount Steep, I zoomed in as a cactus (the plant sniper) to get a close up shot of it. The pinata is due to it being the PvZ birthday month:

I’m 90% certain that is a water wheel of sorts in the background.

(look at me sticking to the challenge two weeks in a row) conformist! :)

bonus: how cute is that baby dolphin!