This week’s Choose My Adventure probably had more preliminary preparation than any other game I’ve had. Most of the time I tend to fly by the seat of my pants to varying levels of success (read: failure), but it was impressed upon me early on that my time in Star Wars Galaxies Legends would be best spent ensuring that there were a number of T’s crossed and I’s dotted.

Just as a refresher, this marks the very first time I have ever played SWG. I missed out on this game’s boat back in the day, as EverQuest Online Adventures and Final Fantasy XI were my first-ever MMORPGs. So when it came to arriving to this game for the first time, I took advantage of some truly heavy-hitting backup: MOP’s own Bree, who has been acting as a supplier, liaison, and knowledge base. Seriously, this lady is an absolute wellspring of information about this game. I can confidently say that I know what it feels like to be tackled to the ground by a library. 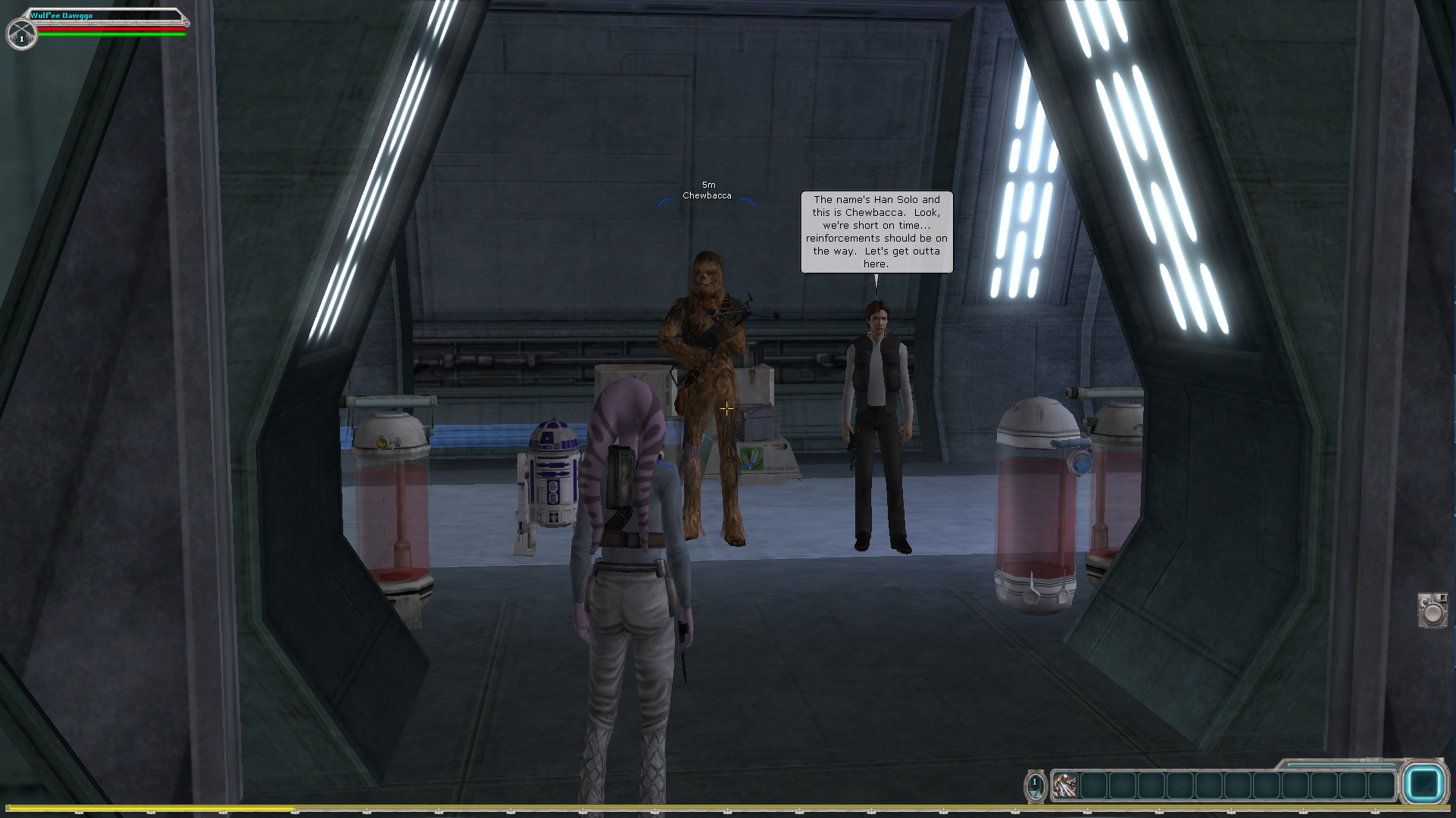 It wasn’t all setup, necessarily. I did, of course, put together my character, a Twilek Bounty Hunter as voted upon by you fine folks. The introduction quest was a pretty standard tutorial affair, with C-3PO handling narrated instruction duties and Han Solo busting my character out of an Imperial prison, inviting me to the Millennium Falcon to shoot some hilariously slow-moving TIE Fighters, and dropping me off at a space station to meet with Boba Fett.

Basically, it made sure to browbeat me with everything Star Wars. This game has Star Wars. Lots of classic Star Wars. Can you believe it? Star Wars!

Heavy-handed as that all was, it did have its charm and ultimately did its job. Over the course of a few hours I made sure to follow the glowy path of light guiding me to quest objectives, took up a few jobs from a lady sitting behind a desk, and generally got myself acclimated to the way SWG operates. I also got a feel for Bounty Hunter combat which is… I mean, I wouldn’t call it dynamic, but it’s totally functional. I suppose the old SOE devs didn’t really know how to make shooting a blaster really stand out, as the abilities I got seemed to just apply different effects to my character zapping fools.

These introductory quests really did do a good job of letting me get a little taste of everything the game has to offer. There were your basic “kill 10” quests and a quick bit of space-based questing, and overall it did a good job of presenting the very basic things that I could get in to. 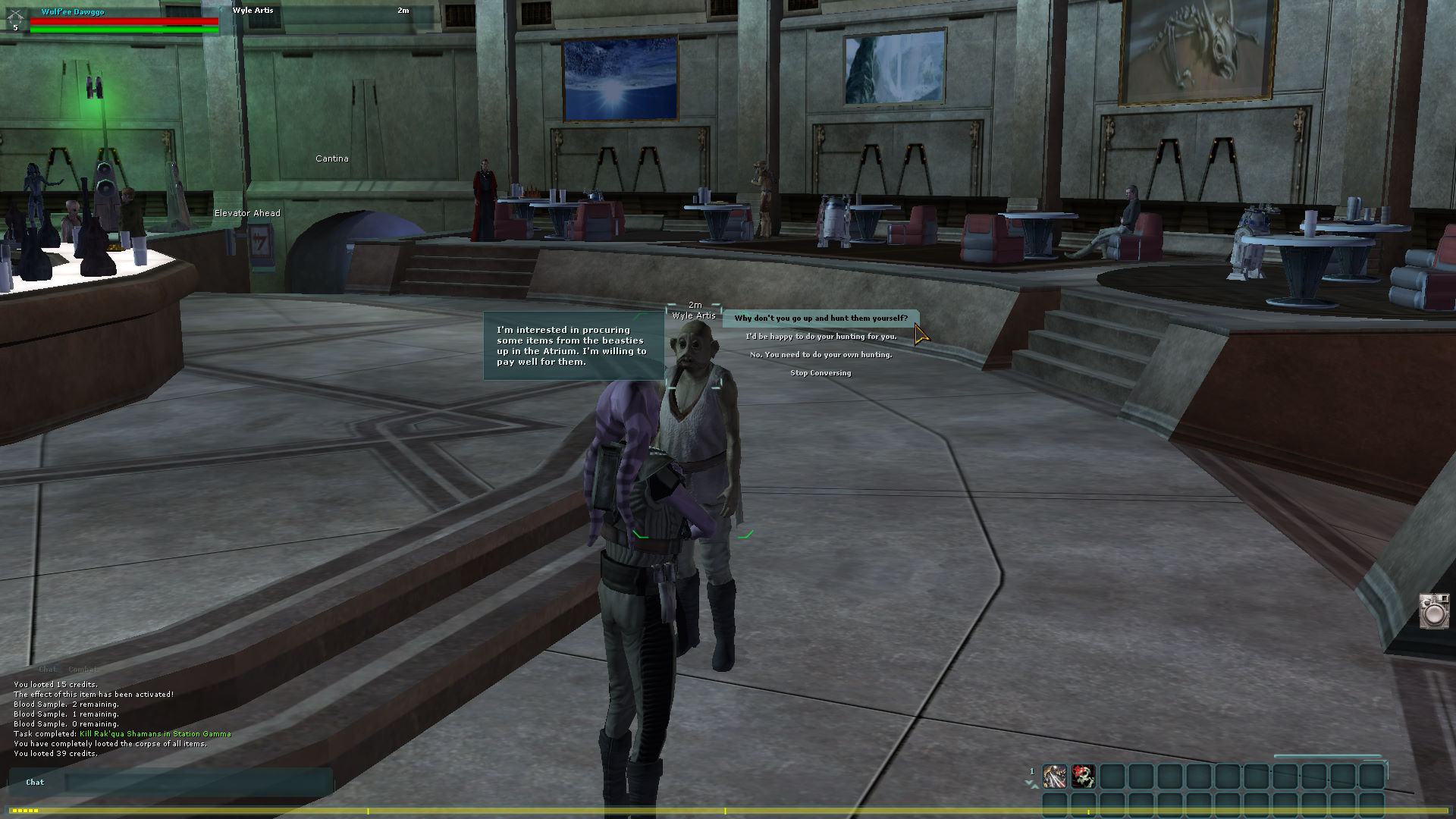 After a few levels, I felt confident enough to leave the station and get ferried to Tatooine, which opened up a few more tutorial-minded quests. I was guided to a rather shady-looking figure who aimed me towards various locations of importance like cloning stations, the auction house, and more. There was also a legacy questline that got me to my first land vehicle, though Bree’s beneficence had already seen me receive a few land vehicles ahead of that point.

Otherwise, most of my time in SWG Legends was spent setting things up. I was setting up my controls. I was setting up a mod that makes the graphics look a little better. I was setting up a mod that made the UI larger so I wouldn’t have to smoosh my face into my monitor to read things. I was learning how to set up auto-attacking, both from Bree and a rather helpful video from Napyet Gaming. I made sure to collect my level 90 boost. I took a trip over to Dantooine to pick up some cosmetic goodies that Bree crafted for me; thanks to her apparently boundless crafting acumen, I now have access to a wide range of blasters at every 10 levels starting at level 20, while my character has this fresh new fit. Can’t be a bounty hunter without some cowgirl clothing, after all.

I have to admit that all of this introduction stuff has gotten me excited to dive into this week’s game. I’m hoping I’ll be able to touch on as much as I possibly can during the month, but it’s pretty obvious from the get-go that SWG is absolutely dense with things to do. That potential has me extremely curious and very excited to dig in, but I also appreciate that I probably need to be careful and pace myself. 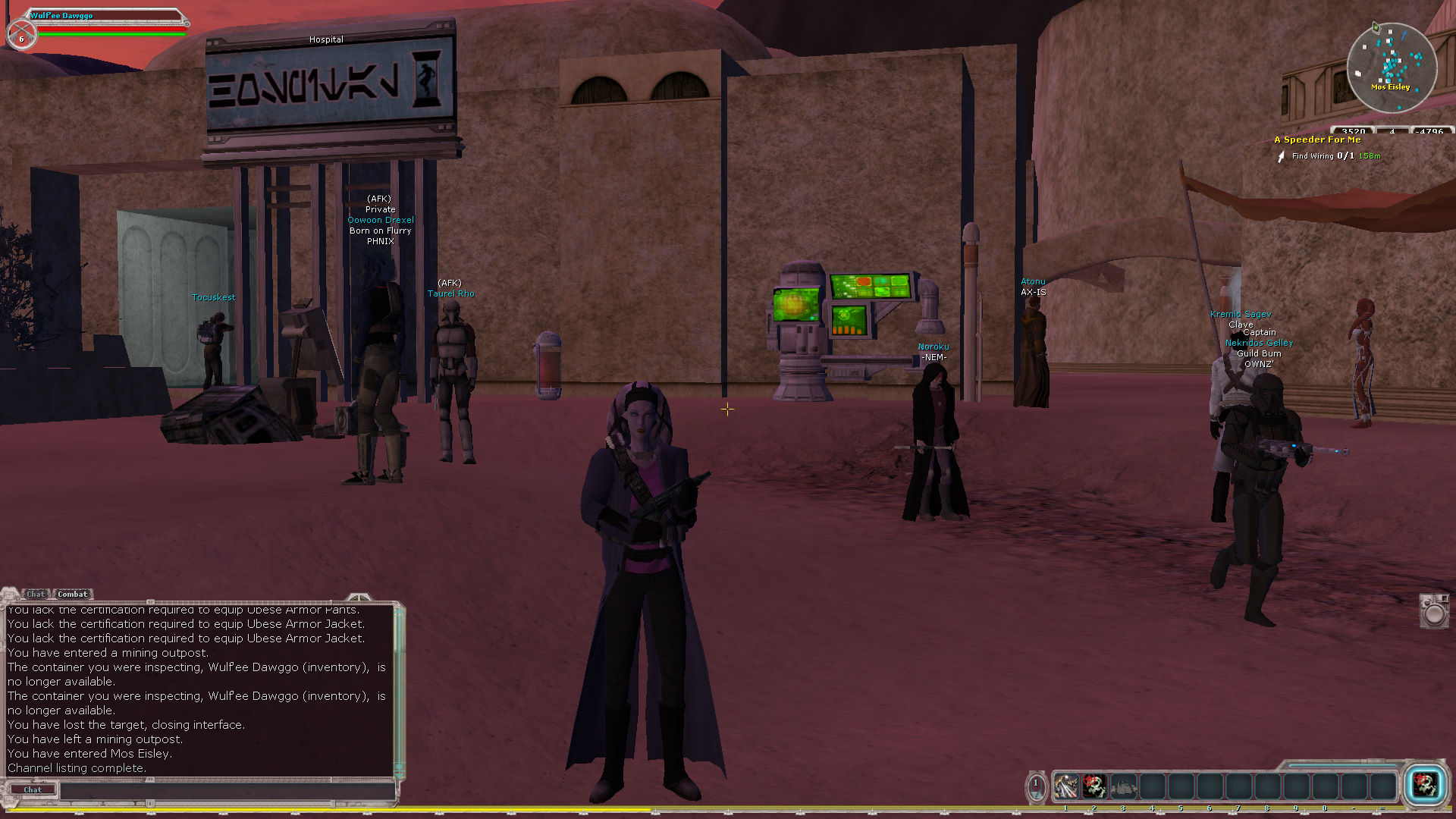 So yes, this week’s adventure wasn’t really full of too much adventure, but there was a lot of important groundwork being laid. And least anyone worry, I still managed to screw things up — at one point I elected to follow a quest that was at Mos Eisley that tasked me with entering some guy’s house to plant evidence, but for some reason my character was constantly being attacked by level 85 droids that one-shot me several times until they went away and the quest just suddenly disappeared. I guess crime doesn’t pay.

Now that I feel like I’ve gotten something of my footing, it’s time to begin narrowing down what sort of content to focus on. I’ve got a couple of paths to follow here, so I’m interested in knowing what to chase first in these early levels. So, on to the polls! 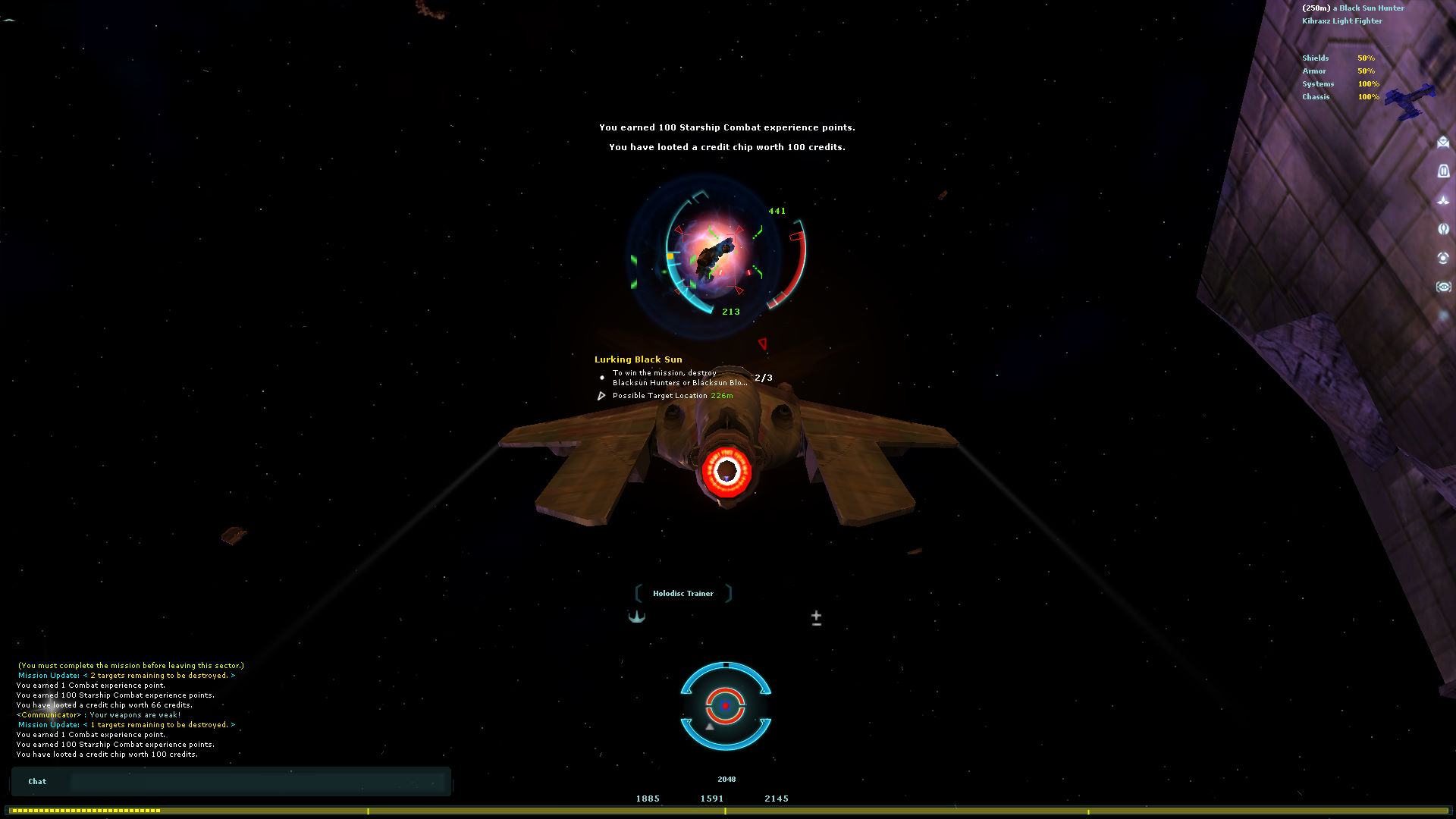 As usual, polling will wrap up this coming Friday, June 4th, at 1:00 p.m. EDT. Until then, I’m going to try to do a bit more research and fight the urge to dive into this sandbox. Because I seriously want to super bad.

Nightingale announces a delay of its early access launch to the...

Vague Patch Notes: No, Little Orbit has not solved the MMO...