It’s official: Crowfall is finally launching. July 6th is the big day. The MMORPG was Kickstarted back in 2015 and has been on quite a ride; it was meant to soft-launch many years ago and has been delayed repeatedly, but the last year in particular has seen the game boost both its genre profile and its content offerings as developers shored up the game’s MMORPG street cred.

“An innovative new approach to MMO design, Crowfall breaks from the tradition of locking characters into a static, never-changing realm or server, allowing players to move freely between worlds, with each world offering a unique experience—different maps, different politics and different rules. These diverse worlds include The Dregs (massive Throne War campaign with forts, keeps and castles that support 100v100 sieges), God’s Reach (perpetual 3-faction battleground servers), the HungerDome (a 12-team, 60-player battle arena) and the Eternal Kingdoms (player-built worlds that offer guilds and monarchs the ability to terraform the terrain and construct spawning cities and massive strongholds).

“Across all of the worlds in Crowfall, one key factor differentiates Crowfall: player agency. Crowfall is a dynamic universe, where players control the direction of the game: cities will rise, castles will fall. Recruit an army and lay siege to your enemies. Hire an assassin to turn the tide of a campaign. Form a band of mercenaries to raid your neighbor’s stronghold. The fate of the Dying Worlds will be determined by player decisions, choices that will reshape the battle and change the shape of this world, forever.”

There’s a new “Eternal Heroes, Dying Worlds” trailer through Powerhouse Animation Studios out today in conjunction with the announcement.

MOP’s own Fight or Kite PvP columnist Sam Kash has been in and out of the beta for the last few years, reporting on the state of the game, so you can get caught up with his coverage!

But if you’re curious enough to want to check out Crowfall yourself before plunking down cash – and yes, this is a buy-to-play MMO – then you’re going to want to get into the beta. Good news for you because ArtCraft kindly granted us an infinite-use code that you can apply to a registered account on the Crowfall website. It will work through June 23rd, which is roughly when the beta ends. The code is:

I guess you folks are probably going to hold me to this now, huh? 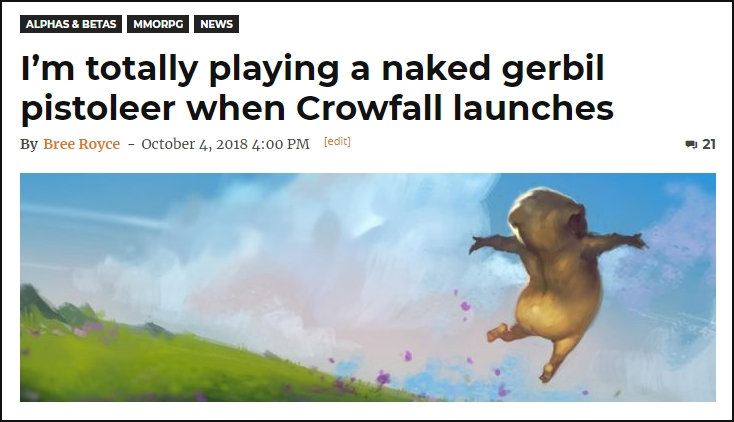