It’s crazy how fast two years go by, but it’s how long I’ve been running this column. I’ve interviewed the lead producer Jaehee Kim, provided a sneak preview to popular (and profitable) content, and showed some love to the game’s beautiful server chat. Heck, I even pushed to give it the 2020 MMO of the year award and threw a hissy fit when I didn’t get what I wanted.

END_OF_DOCUMENT_TOKEN_TO_BE_REPLACED
But despite my enthusiasm for the game, I don’t think I’ve ever talked abut why I love this game so much. So for this week’s edition of Desert Oasis, I dive into something more personal: why Black Desert Online is my favorite MMORPG.

It fits in with my lifestyle

When my wife and I were still dating, we were in our 20s and had a whole lot of time on our hands. Being Final Fantasy fans, we gravitated towards FFXIV. The longwinded story was fine for us back then; we didn’t have much money yet. We had the time, and it was a good way to save money.

But as we moved forward, getting married, starting our careers, buying homes, and now raising a child, we don’t have much time, and when a gaming session ends up being just one cutscene (that might put us to sleep since we’re so dang tired) and walking from one NPC to the next, we slowly fell away from the game.

And yet FFXIV is my wife’s perfect MMORPG; anything else to her is a downgrade. I’m pretty sure we’ll pick up the game again, but it won’t be anytime soon. Maybe not until my kid can use a controller (and be top DPS in a PUG too).

So when I picked up BDO, she saw that as a pretty huge downgrade. But I had a very specific thing in mind: a sexy game with a largely ignorable story, and leveling up through killing mobs. Lots and lots and lots and lots of mobs.

What made it even better was that I could fit the game in very neatly in a busy week. The game gives scrolls that increase experience gain and food items that strengthen the player character for a set amount of time, usually an hour, and that’s the perfect metric for keeping track of time. And the scrolls count down only while I’m logged in. So if I pop an hour scroll, but suddenly have to visit my sister-in-law because I forgot that it was her birthday, I don’t lose anything. I can just log off.

Compare that to a dungeon run in a game like World of Warcraft or the upcoming Swords of Legends where I have to be present the entire time or face a penalty. BDO is just much more respectful of my time, and I can still make meaningful progress.

I wasn’t around for Barrens chat. But from the way people talk about it, it sounded like a blast. BDO’s chat system is pretty much that. Aside from the guild chat, say chat, and team chat, BDO features server chat and world chat. For server chat, any message sent will be seen by all players on the server shards. So if someone pops off on Valencia 3, players who are on Valencia 1, 2, 4, and 5 will all see it. It costs energy, which regenerates one point every few minutes (although personally I never run out of energy, even when I’m participating in a conversation actively).

I think this has to be my favorite thing about BDO. It’s always lively and entertaining. It’s also actually helpful (at least when I’m on!). Sometimes I just sit there and answer player questions or provide advice whenever I can. It’s fun. Sure, there’s going to be the occasional thing that’ll get people riled up, but that just adds to the flavor of each server. 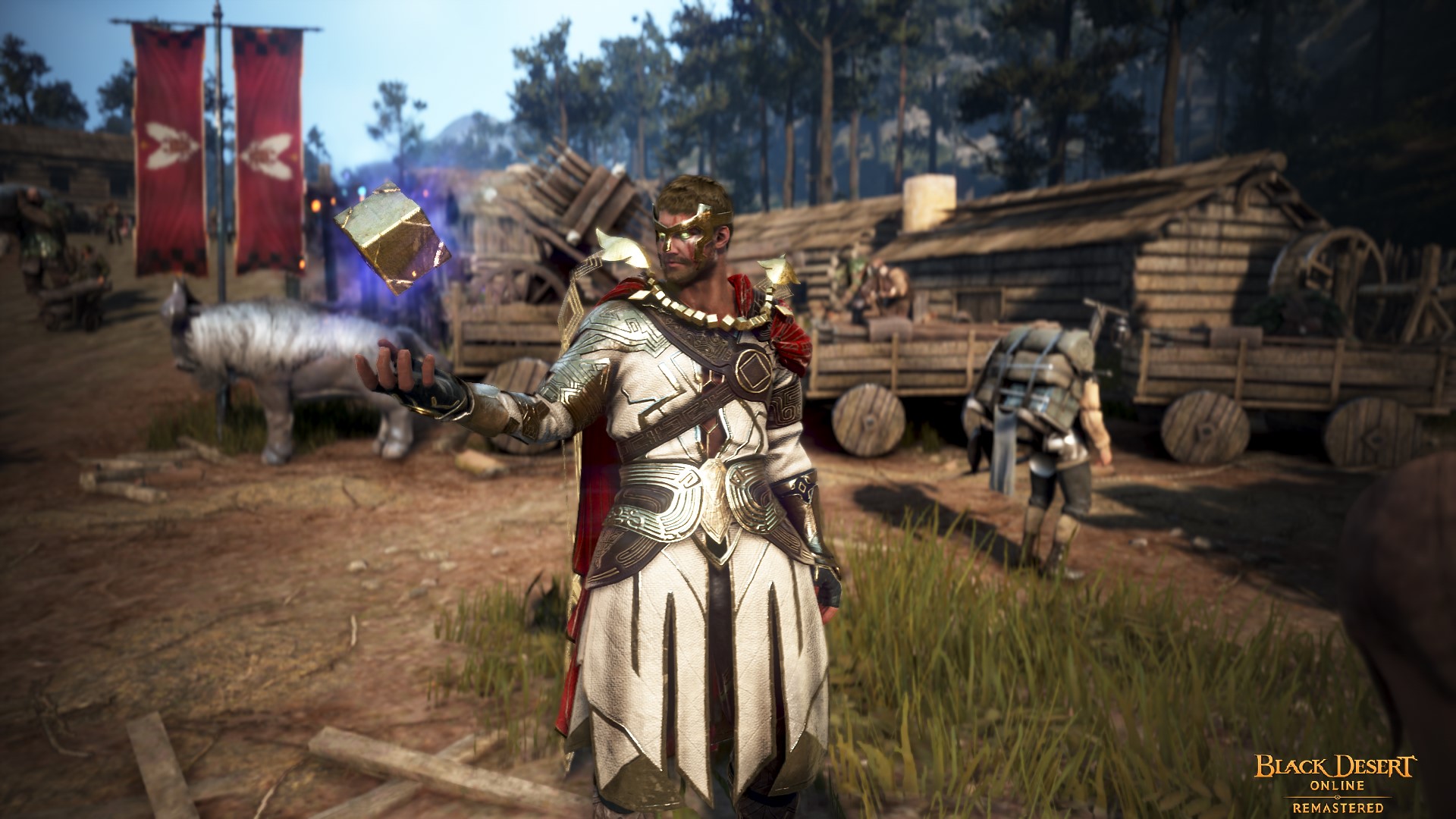 Got 50 cents’ worth of BDO’s premium currency and need to say something to literally everyone in the game? Then buy a megaphone from the cash shop and send your message to all your adoring fans! The fun thing about the world chat is that it costs money. So if people are spamming their latest victory over a guild, or flexing their PEN items, it costs money. Just the fact that someone had to pull out a credit card to say something dumb with full knowledge that they’re wasting their money is in-and-of itself hilarious.

And there’s some real comedy gold too. One time, a player posted the entire first chapter of Fifty Shades of Grey on world chat. He’d post each paragraph just long enough for a person to read the paragraph before posting the next. It drowned out all the spamming, arguments, and guild recruitment messages. It was great. I was killing Blood Wolves while reading about Anastasia’s seductive lips biting a pencil and getting Christian Grey all bothered. It really “added some flavor” to the otherwise monotonous task of grinding mobs for three hours.

I also appreciate how many players are direct. I love it when people are direct with me. It’s easy to understand and gets to the core of the issues faster. And Black Desert Online’s local chatterboxes are pretty straightforward. And I just appreciate it. Makes life a ton easier. No guesswork.

The last few reasons probably wouldn’t convince anyone to jump into the game unless they have the same exact taste as I do. But the final reason (and the inspiration for this article in the first place) is that I just feel glad to be logged on. It’s my home game, I know it so well, and simply logging onto the game brings me a modicum of comfort, even during challenging days in my life.

I’m pretty sure I’m not the only one who does this: I log into the game, put my character in a spot somewhere in town and just move on with my day. They don’t even have to be doing something productive. Just the very act of doing so makes my day complete. If I have two or three minutes to myself during the day, I sit on my chair and just hop around the town for no other reason than just do it. It’s a silly ritual (and you all do it, don’t lie), but for some reason it helps me stop and think. A very important skill. The fact that the game world is so beautiful helps a whole bunch too.

My main city is Duvencrune in Drieghan. Taking inspiration from the Himalayas and the cultures that grew from there, the city lies atop a mountain range. Just a little bit off the main road, players are treated to the sights of snow-capped mountains and a giant monolith that honors the heroes of the land. I don’t get philosophical or anything about it, but it’s still fun to look at and marvel at how far MMORPGs have come in terms of graphics.

But that’s not all. I’m just so familiar with Black Desert Online. While I still use auto travel often, I know how to get to grindspots without any assistance. I know where the important NPCs are in Velia, Heidel, Altinova, and Valencia. I know the little tricks that make my grinds a little more bearable and efficient. I’ve got a pretty good idea of the different “personalities” of each server. If I want to just chat with some pretty chill people, I play on the Valencia servers. If I want to be around RPers, I go on Calpheon 2.  If I want to hear some very intense political discourse, then I can just go on the Mediah servers and wait three seconds.

Black Desert Online is a niche game. Not everyone will like it. But for the players who call their games home, be it FFXIV, Shroud of the Avatar, or Meridian 59, it’s just so satisfying to have an online space to call your own.