Ahead of Crowfall’s launch this July, ArtCraft is announcing a reduction in its box price and reveals its full subscription plan. “Crowfall is unveiling its innovative VIP membership, and lowering the price on the cost of the base game from $49.99 to $39.99 USD,” the studio announced today. “These changes are all part of Crowfall’s transition to a live game service, launching July 6, 2021.” This business model, we note, is not actually a surprise, as it’s been the plan since the game’s original announcement in 2015, but the details are just now being finalized.

Notably, the subscription “VIP program” grants more item storage in the personal vault and campaign bank space, extended access to Eternal Kingdoms, and “several convenience options that enhance the gameplay experience along with other quality-of-life benefits.” According to the chart on the VIP member page, that amounts to thinks like mount decay and unlimited free respecs, which ArtCraft says represent “a critical benefit” to players, though of course the studio is also planning to put them in the game for gold too. 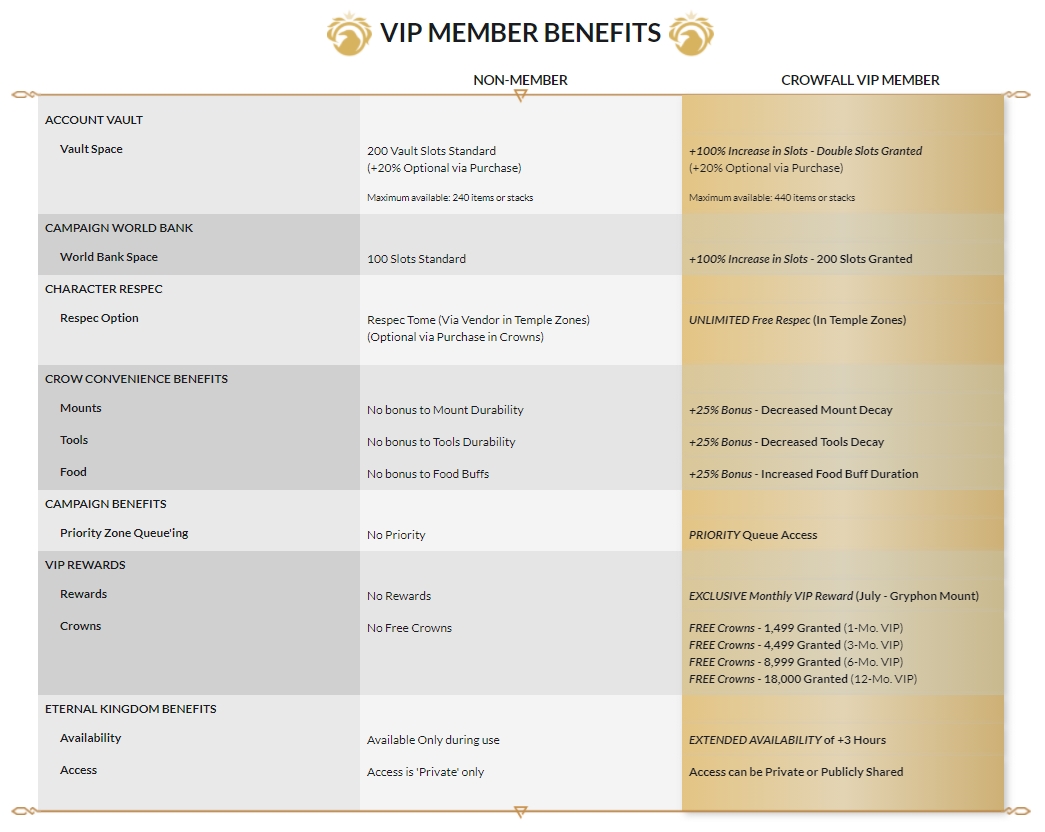 The sub is pretty simple, starting at $14.99 per month, though you can get it under $12 if you pay for a year in advance, with a couple of tiers in between. The sub includes a cash-shop stipend too.

“Feature options for the Crowfall VIP membership range from one month to 12-month plans. The 12-month membership plan includes a grant of 18,000 Crowns, offering the highest value, at a 22% discount off the standard monthly rate. All plans include monthly grants of bonus in-game currency (Crowns) as well as an exclusive monthly item reward. The service officially launches July 6, 2021 with the official launch of the game. Players who activate the VIP membership program in July (by July 31, 2021 at 11:59 CDT), or Backers who have already purchased the VIP service, will receive the exclusive Gryphon Mount – the July VIP membership reward! Additionally, in appreciation of our community of Backers, starting today, all Crowfall game access (bundle) packs now include one free month of the VIP membership. Best of all, Backers who have already purchased a pack (as of June 8, 2021) will all be receiving one additional month of *VIP membership added to their service at launch (including Kickstarter Packs).”