Remember how we reported on Pokemon Go’s next Go Fest’s reveal, but we had only Day 1 and general information? Well, Niantic’s Released Day 2’s raid info and new details on raid achievements (out now), awarding an achievement showcased for dealing the most damage or just having the tallest pokemon.

Before we break this down, I will say that this post may require an update. While Niantic is advertising that “every Legendary Pokémon discovered in Pokémon GO so far will be appearing in five-star raids during Pokémon GO Fest 2021,” fans have already noted that Origin Forme Giratina, Armored Mewtwo, and the Forces of Nature Incarnate Forms are unlisted and don’t appear on content creator’s infographs. Niantic has already amended the initial reveal by adding the three released Swords of Justice (Cobalion, Terrakion, and Virizion). We’re reached out to PR for clarity, but for now, it feels like it’s safer for us to report that only most of the legendaries will be appearing for this event. And that’s a lot to plan out. 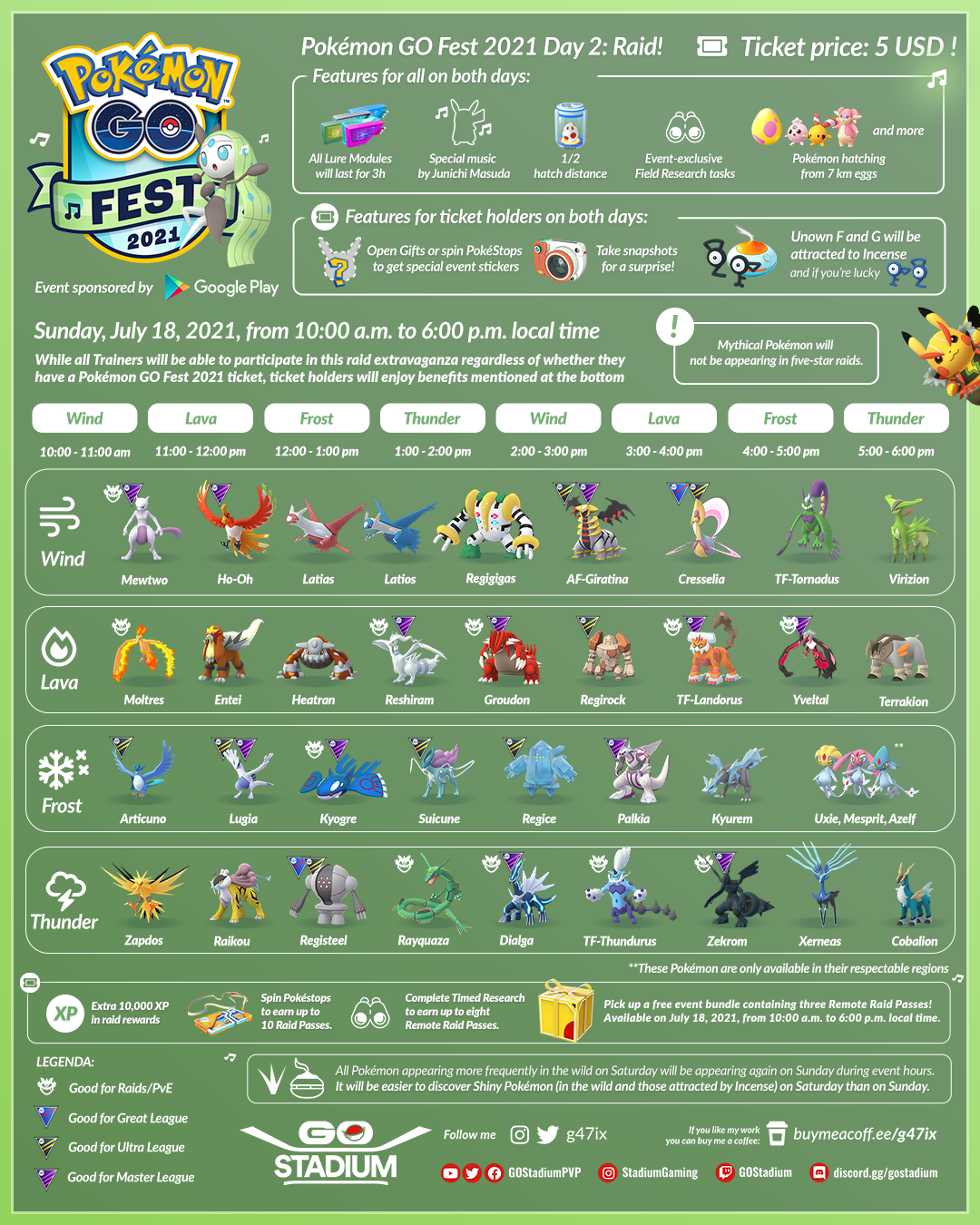 6/28 Update: We’ve gotten word from Niantic PR that, “each Legendary Pokémon will only have one form appearing in GO Fest,” so this should be the final roster.

With all the legendaries out on the same day and in limited-sized pools, coordinating groups will be fairly difficult. Niantic has said these raids will be 5-star raids, so unless the pokemon are nerfed or players are buffed, it’ll be difficult to quickly get through all this assuming you 1) find the pokemon you actually want to raid and 2) have enough people to raid with you.

This means you’ll probably want to play in an area with lots of gyms, be ready to drive, and/or find a remote raiding Discord group, which obviously defeats the purpose of RL socializing, but COVID has changed the game. Besides, we will be getting up to 11 free Remote Passes, which can be used from just outside the usual Gym’s range to act as a kind of regular pass. However, one of the new Raid Achievements is awarded to the person raiding from the farthest distance, so you may want to pursue that.

While you can use the image to the left to help plan out which pokemon you want/need, especially for the Pokedex entries you may be missing, I’d like to point out a few gems you may want to focus on. Just remember that Niantic has said nothing of legacy moves, so assume that you may need to use an Elite Charged or Quick TM to optimize these pokemon. With that said:

Wind Hour is mostly about Mewtwo*. It gets two Mega Forms, plus you’ll want the XL Candy for it. While Latias and Latios get Mega Forms as well, they aren’t predicted to be very relevant. Giratina’s Altered Form does have PvP uses and provides XL Candy, and Cresselia is a strong pick in the lower Leagues, but nothing else really stands out here.

*6/29 Update: Mewtwo will actually be available before and after the event, from 10 am July 16, 2021 to 10 am July 23. If you are unable to raid any day beyond Go Fest Day 2, by all means, pursue Mewtwo. Otherwise, Giratina may be more valuable.

Lava Hour is the best/worst hour, simply because nearly all the pokemon here can be useful aside from Regirock. For PvE players, I’d suggest Reshiram as a high priority, as it’s a sturdy fire type that hasn’t been released to us very often. Moltres and Yveltal are useful as the prior is a strong Fire/Flying-type and gets a new version when we reach Gen 8, while Yveltal is newer and eventually gets a signature move that may make it quite a bit stronger. Entei is a strong Fire pick that is one of the few Fire-types to resist Ice attacks, while Groudon eventually gets a Primal Form (basically Mega Form) and signature move that should make quite the beast, while Landorus is a great Ground-type (though the recent Garchomp Community Day did give us a more accessible top-tier Ground-type). PvP and Rocket fans may also want to grab Heatran for stats and/or XL Candy.

Frost Hour may be the time to use those Remote Raid Passes, as the Lake Guardians are regional Legendaries. They’re not very useful, though, so you may just want one as a Dex-filler. Kyogre’s a high priority for XL Candy and another future Primal/Mega pokemon that will rock the meta. Palkia is a good performer in Master League, but everything else has limited PvP use, though I’d argue Regice and Suicune are quite limited in their uses. Kyurem is just plain bad, though it does have unreleased forms that may be fairly useful. However, when comparing it to the rest of the spread, and given the limited amount of time for the event, I’d suggest avoiding it unless you need one for your Pokedex.

Thunder Hour, like Lava Hour, seems full of good stuff. Top priority goes to Zekrom, as it’s the best non-shadow, non-Mega Electric-type, plus a strong choice against Rockets and not a bad pick in Master League. As for Leagues, Dialgia is still a top choice in Master League, so PvP fans may want to farm this one, as this is only the third time it’s been available and first time you’ll be able to get XL Candy for it. If you don’t have a good Rayquaza or need XL Candy, this is another opportunity for it, as it’s a Dragon-type that, similar to Kyogre and Groudon, will get a signature move and Primal (Mega) form down the line. Raikou is still a good Electric-type if you don’t see Zekrom, want XL Candy or want it for PvP uses. Registeel is a top-end pick for PvP outside Master League, and Zapdos has a form in Gen 8 that could make it a reasonable investment.

Vets should focus on XL Candy for Giratina, Moltres, Groudon, Kyogre, and Rayquaza. For PvP, Registeel and Dialgia should get attention. If your time is limited, add Mewtwo there as well (but it can be raided before and after the event too.

Casuals: After you fill in Dex fillers, I’d suggest raiders get candy for Kyogre, Groudon, Rayquaza, Zekrom, and Heatran. If you want to PvP, many of those are useful, though try to grab any Dialgia and a Registeel that can power up to or below 1500 or 2500 (depending on which League you want it for). Like vets, if you can raid before or after the event, you can pass on Mewtwo. These are just quick picks though, and while you may be able to do better, they’re generalists and fairly safe investments.

Look over the above chart, share it with friends, and use this summary to hit some talking points with your Poke-buddies to plan out how you may want to tackle the July 18 Go Fest raids. Be sure to check back here or on social media, as this may be updated if Niantic provides us more details.