I’m oddly fascinated with water effects and physics (what little there is) in MMOs, especially when games try to portray large lakes or oceans. So often it feels very fakey when you really examine it, but some games — like Elder Scrolls Online — get passing grades in this area.

Water’s probably not what Lethia is contemplating here but rather the choice of traveling companion: “I wanna present you the most monstrous of monsters, my pet that basically ruins every good picture with his distorted figure.”

Every family has a member like that when it comes to photo shoots, right? 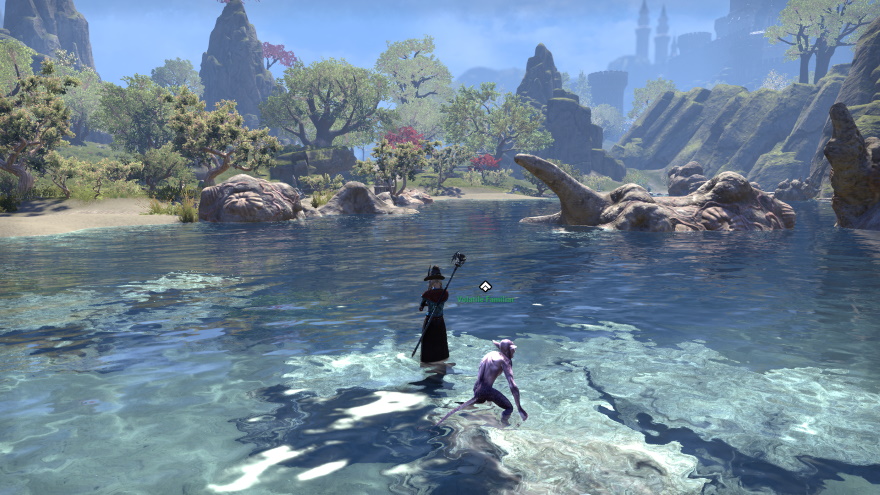 Meanwhile, a chunk of the One Shots crew was hanging out in Secret World Legends’ Agartha, perhaps playing baseball or practicing to become a gangster.

“Where is the pinata?” Minimalistway says. “Years after not playing SWL, I’m back and I feel rusty. I wish there is a way to restart the whole story, as I forgot how to play the game. I think it’s better to start a new character then go back to my main when I catch up with the story.” 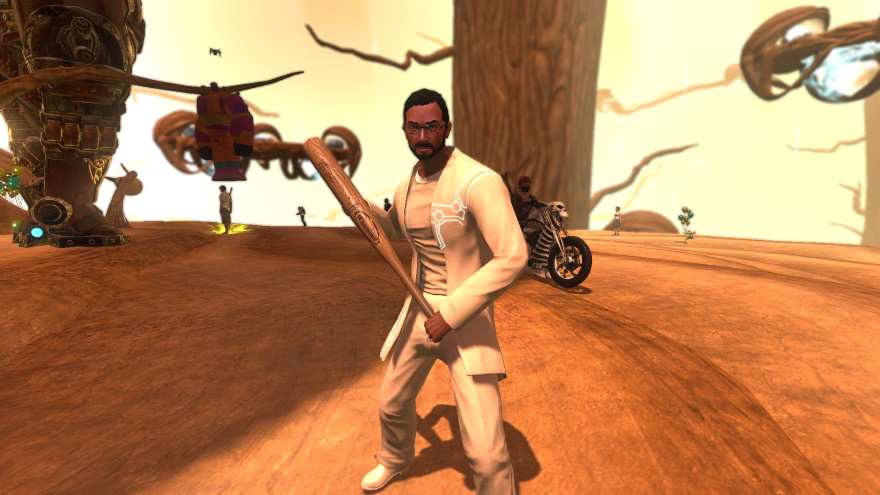 But when there’s one bee with a bat, you always know… there will be many, many more.

“The Beehemoth with the powers of transformation, transfiguration, and dispensing candy to all the little girls, boys, and enbies of Secret World Legends,” Hikari posted. 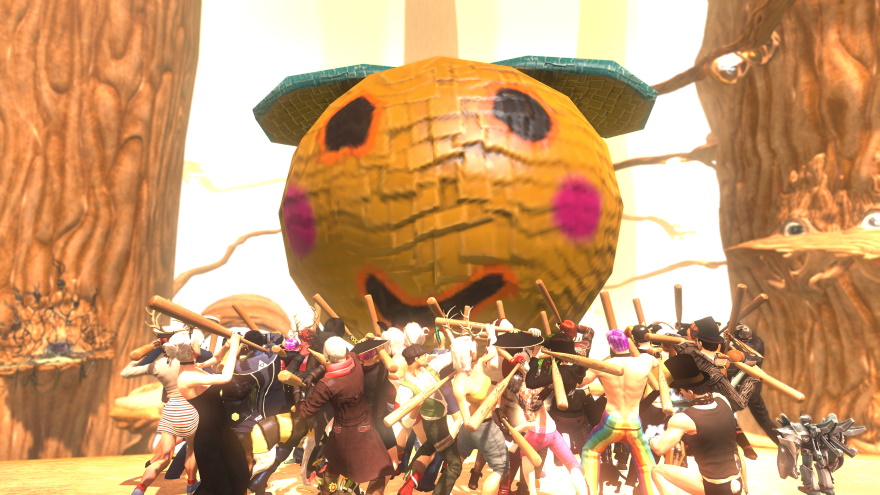 Vincent continues to have a lot of fun with filters and Final Fantasy XIV pictures. Would we all look so majestic… so angelic… so powerful on our way to finding the nearest litter box. Kitty really, really has to go potty. 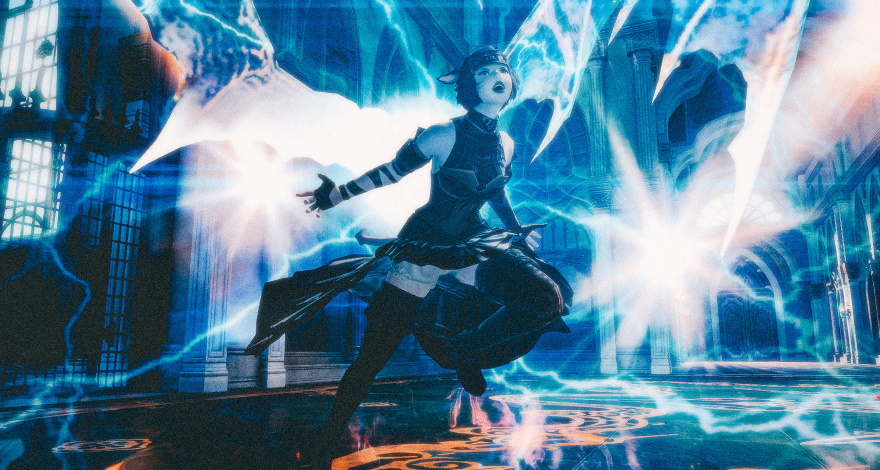 Don’t cry for Utakata, because this seemingly innocent and pitiable Blade and Soul character is harboring… “the monster within!” It’s probably just going to unleash a craving for Taco Bell chalupas or something, but there’s an off-chance it’ll take your head off. 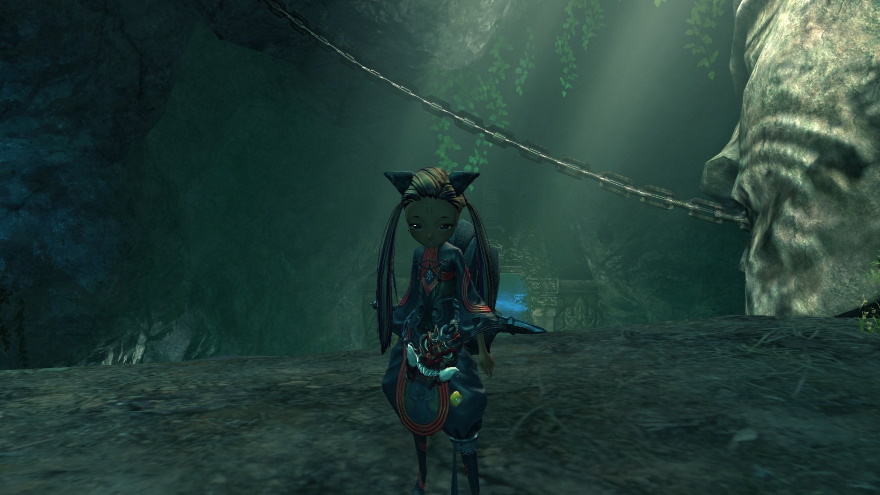 Flex those fingers and pound that print screen key with all your might as you document — and share — your MMO adventures! What were you up to this past week? Let’s see photographic proof that most definitely will not be admissible in court!

I enjoy the underwater content in GW2, but the most “impressed” I’ve been was when they got the oceans/water going in Landmark. Digging into the sand on a beach and seeing water seep into the hole you dug was really magical.

I finally got my Goblin Nature Warden to the highest level and the highest peak possible. I took a black and white picture for setting, to show dominance.

Sadly, because of the low quality of my shaders and drawing distance, the background didn’t render. Oh well.

ESO does world building really well with a diverse and pretty world to explore.

Sometimes you find yourself riding into the sunset through meadows with dogs barking in the distance, the promise of hot food and a soft bed waiting for you at next Inn.

Other times you find yourself in a mysterious cave the only promises on offer here being danger and death. You push forward regardless because this is what you do and this is where legends are made.

What class/race is your main?

I exclusively play Nords, my main is a DK, my lvl 50 alt is a Necromancer.

I have a DK (Dark elf) and a Warden (Khajit) that I consider my level 50 mains. I am spending my time between those two gearing them up and earning champion points.

I also have a level 50 Necro (Orc) but I am not sure what I want to do with her so she is kind of semi retired at the moment.

You can get some unique Stamcro setups, orcs are perfect for this. I have one with Leeching Plate (from one of the Chests in White Gold Tower, you can use key fragents to open the chests, you can earn the keys or just buy them from an AH) and Briarthorn.

Got a nice look as well.

As the official photographer for MEGAversary4 and Happy Tentacle Radio, these last two weeks have been jam-packed with screenshots from the Secret World Legends annual community event.

There was also a boat-load of fun to be had with Black Desert’s new pirate class, the Corsair, which released on all platforms this week.

And more SWL shots from MEGAversary4

Good screenshots. And I love the community events – I’ve recently attended some Trevor Project fund raising events in FFXIV, it was pretty fun to see all the people dancing off together, too bad FFXIV doesn’t have a proximity voice chat, would’ve made those more interesting if DJ’s could play music in game through voice chat.

Yeah, our radio stations in Secret World host their own streaming sites.

The first one is taken on the border of Korthia, looking at the Maw. The second and third ones are just random shots around the zone.

At first I was happy to see trees in The Maw. Then it’s made aware to me that this zone wasn’t originally from there… :(

I will definitely have a lot more to share next week, with SOLO launching the 9th – it’s got a built-in thing for pictures (not unlike /gpose in FFXIV, but with less emote related options and camera controls aren’t as good, but better overlay filters/effects) that’s fun to use. In fact, the filter is built into the game itself – it’s like having Reshade but native to the game itself.

Unfortunately I accidentally deleted my beta screenshots, so I’ll have to wait till next week to share those.

The other main thing I’ve been doing is having a blast on Corsair. I’ve always had a soft spot for the pirate/buccaneer and age of sail aesthetic, and it’s a class that fits that bill perfectly. That it also has a pretty mermaid form is just icing on the seafaring cake.

Nar Shaddaa always makes me happy, time for some gambling.

What ESO has in spades is atmosphere, bloody loads of it.

You’ve got a real knack for making ESO look good.

Nice composition on those, especially the last one.

Bit cheesy, but I could not resist.

I’m quite enjoying discovering all the delightful little touches from the Bethesda team in FO76. They have a thing for teddy bears being put in awkward situations, like this poor guy left to plunge a port-o-potty deep in a mine for eternity. At least he’s got a helping hand…I’ll see myself out now.